How not to climb in grizzly bear country--Granite Peak, Montana

To the top of the Colorado Rockies

To Ohio's highest point, and beyond

Through tornadoes & flooding to 3 highpoints in the Deep South

To the top of the lower 48 states, with my dead friend, on California's Mt. Whitney

Failure on a high peak: The Kansas Saga

Ashland man's path to mountaineering got off to a rocky start 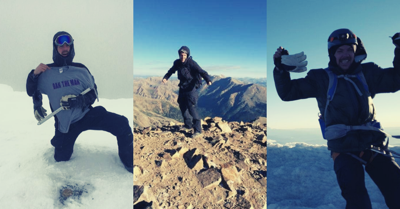 Hands down, the worst part of climbing is the fitness, diet and prep work that happens in the months before the trek. For those looking to tackle a long backpacking trail, a higher peak or just want to cut 20 pounds in three months, here’s a quick guide based on what I’m doing right now to train for a summit attempt in August—King’s Peak, the highest point in Utah at over 13,000 feet.

It all starts with your diet. But that’s such a gross word. Diet implies sacrifice and suffering and eating stuff that sucks. And failure. Think of it as adding a certain type of fuel that transforms muscle. That’s all and it’s that simple.

In the first month of the mountaineering training regiment, sugar is the enemy. An old bodybuilding friend Jonathan Westbrook once explained that it’s not wise to build good muscle on top of bad. You must first lean-out your core but switching to a no sugar, low calorie, pure protein and iron meal plan for 30 days.

Adam Fox is a mountaineer and state highpointer. Fox has the world speed record for the Southern Six Pack and has been to the top of 37 states, most notably Mt. Marcy and Mt. Washington in winter, Mt. Whitney, Mt. Hood, Gannett Peak and Granite Peak.

As soon as you wake up, do a shot of vinegar (with the mother) and pound a full glass of water. Mix the two if you can’t handle the sour punch of the straight shot. One hour later, hopefully after you’ve moved your bowels (daily digestion is paramount), it’s time for breakfast. Put the cereal away! Loaded with sugar, especially the milk. Opt for plain non-fat Greek yogurt and if the taste is too much add a little raw honey from your local bee farmer.

Two hours later, consume an apple or another type of fruit. You have to re-train your metabolism, so you’ll be feeding that fire every two-to-three hours.

For lunch, again, look for pure protein, like a plant-based powder, or a meal replacement like Soylent. Mix with water, not milk or juice that has extra sugar.

Your late afternoon snack can be plain pinto beans or spinach salad (both high in iron). Watch the dressing though—that’s where the calories and fat seep in.

Continue the trend of 5-7 small snacks throughout the day, like plain avocados, and when you check, you’ll be amazed how much sugar is added to almost every product. Natural sugars are hard to avoid, and it’s OK to have a freezer full of pre-chopped fruits and veggies you use to make your morning smoothies.

Stop eating after 7 p.m.! I put post-it-notes on my fridge and cabinets as a reminder. They call it intermediate fasting, where you can only eat during a window throughout the day. Your body will eat its fat self throughout the night instead of being slowed by digestion.

My secret nutritional weapon: the magic tonic of beet kvass. Popular in Eastern Europe and Russian, it’s a fermented cultured drink that can be a probiotic, liver cleanser, gut flora aid and it tastes great! Mine comes with jalapeño, ginger, horseradish, cabbage, union and garlic. Let’s just say my cellmate ain’t kissing me after I drink it, but it’s a car wash for my guts.

Month one is the start of conditioning. Twice a week you need to run two-to-three miles or the equivalent on a bike or machine. Go slow. 10-12 minute miles are totally fine.

For you drinkers and partyers, no imbibing during the week. You can have two days of libations, but only one “cheat day” in terms of food.

The second month is where the fun starts. You don’t have to be enslaved by sugar restrictions, you’ll be running longer and generally feel stronger. Five to eight pounds are off the scale. The stomach and arm tone is beginning to be noticeable. Your metabolism is melting cellulite at a rapid rate.

In month two, you can only drink one day/have one cheat day.

Make life easier on yourself when training—go to a running store and get the right shoes for your arch and foot structure. Get wireless earbuds and listen to a podcast or music. Have a running watch that shows your pace and distance.

It’s also helpful to vary your training. Run with friends, do different courses, mix in stair steps, pull-ups, push-ups and sit-ups and yoga.

If your bones start to ache or you’re dealing with inflammation and swelling, turmeric is a great naturopathic method to reduced those issues. Make a tea, mix into one of your protein shakes or you can buy the capsules and swallow.

By the start of month three, you’ve been conditioned into a new person. You simply don’t desire the junk food. You can go out and run for 40 minutes no problem, where two months ago you could barely make two miles. Your confidence will increase, and looking better always helps in certain areas of domestic life (wink, wink).

You won’t think, oh, I have to work out today; you will just do it, like brushing your teeth.

The biggest reason this works for me and many other climbers is because we have an end goal. If you’re not in shape, you won’t make the summit. And further, your weak legs and body could lead to a slip that might cost you and your team their lives. So set a goal. Could be a 5K, could be a marathon or a hiking trip. And it helps to have a buddy along for the ride. That way, when they text you about how they just ran 11 miles and it was easy (like my psycho-fit new climbing partner Chad Emmons does), you’ll have extra motivation to get up and complete the run.