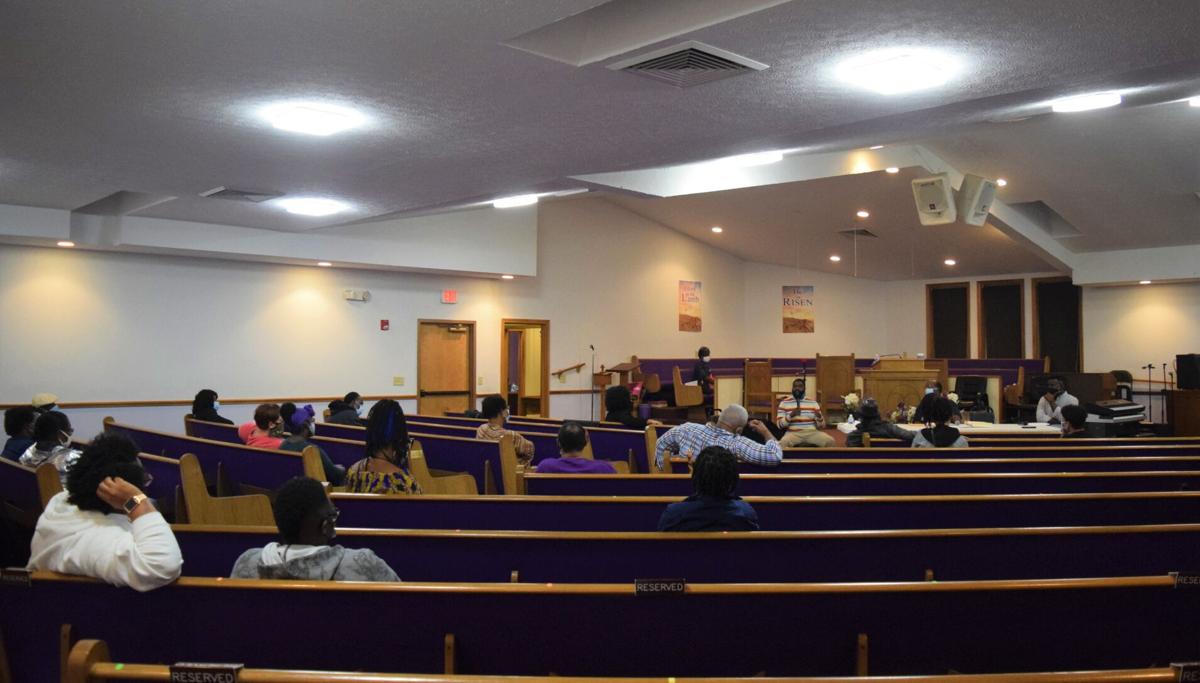 About 30 local residents listen during a Black/Brown Coalition Town Hall on Friday evening at Providence Baptist Church to discuss the recently approved Code of Conduct and the relationship between Mansfield police and community members. 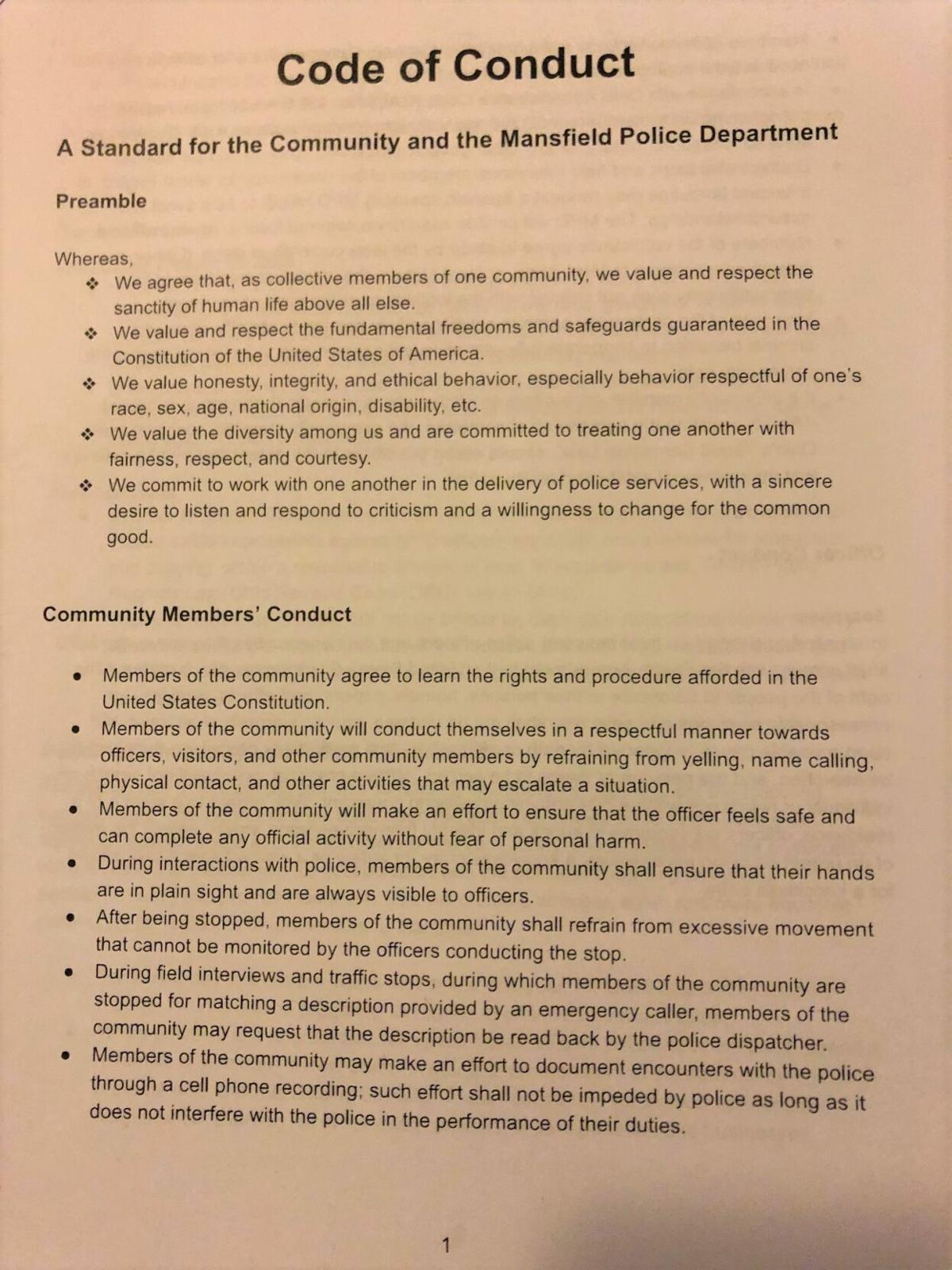 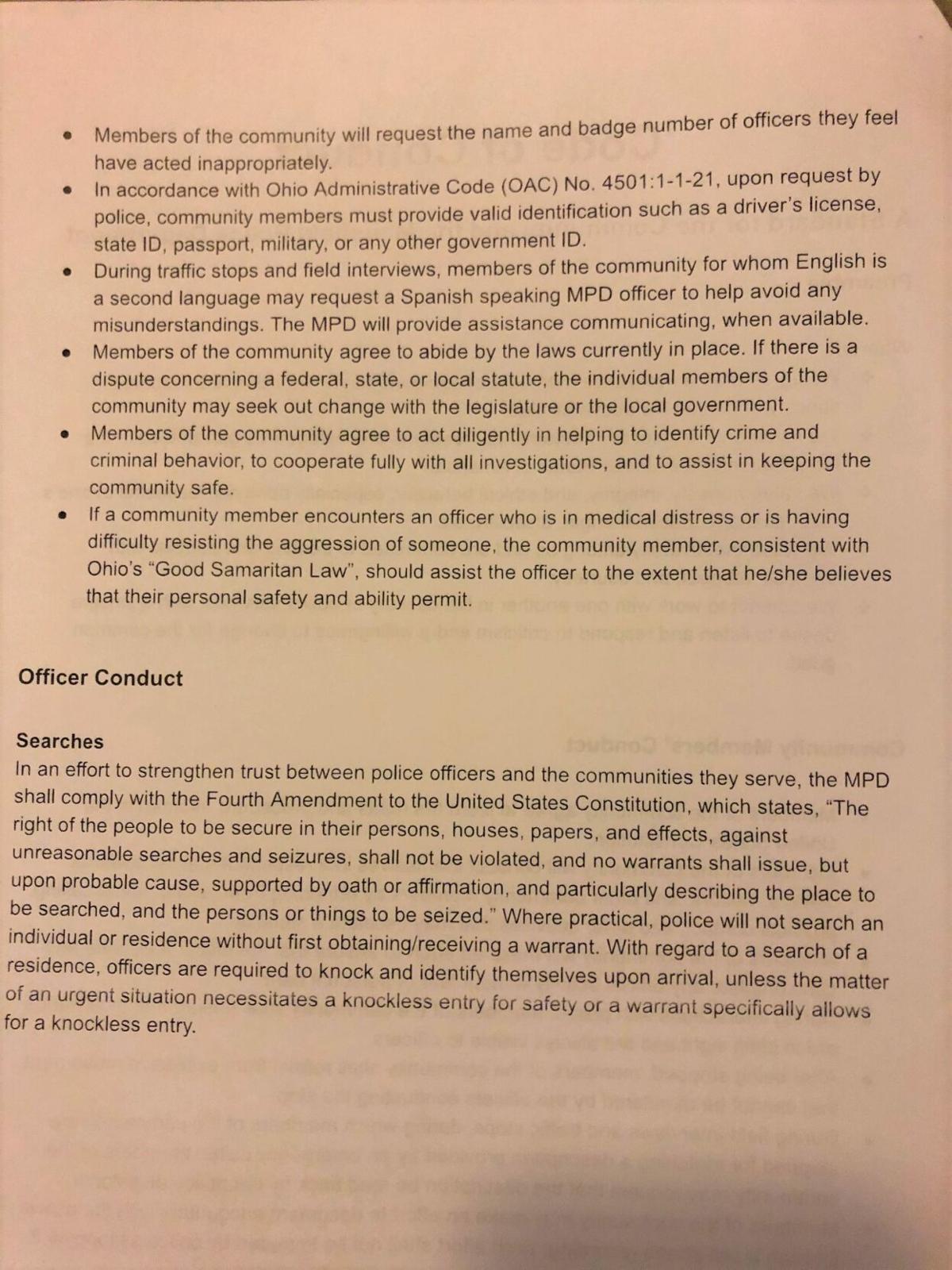 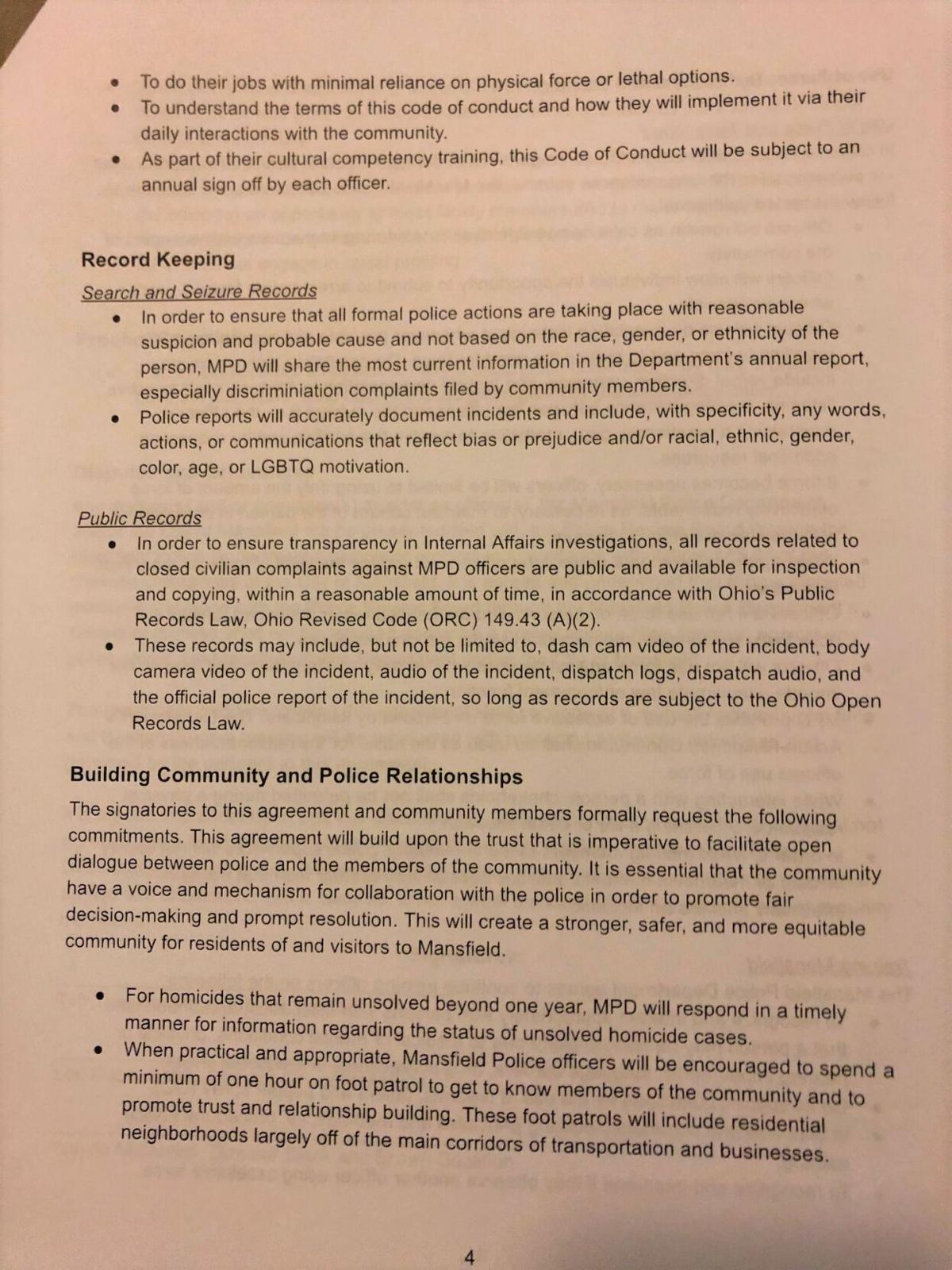 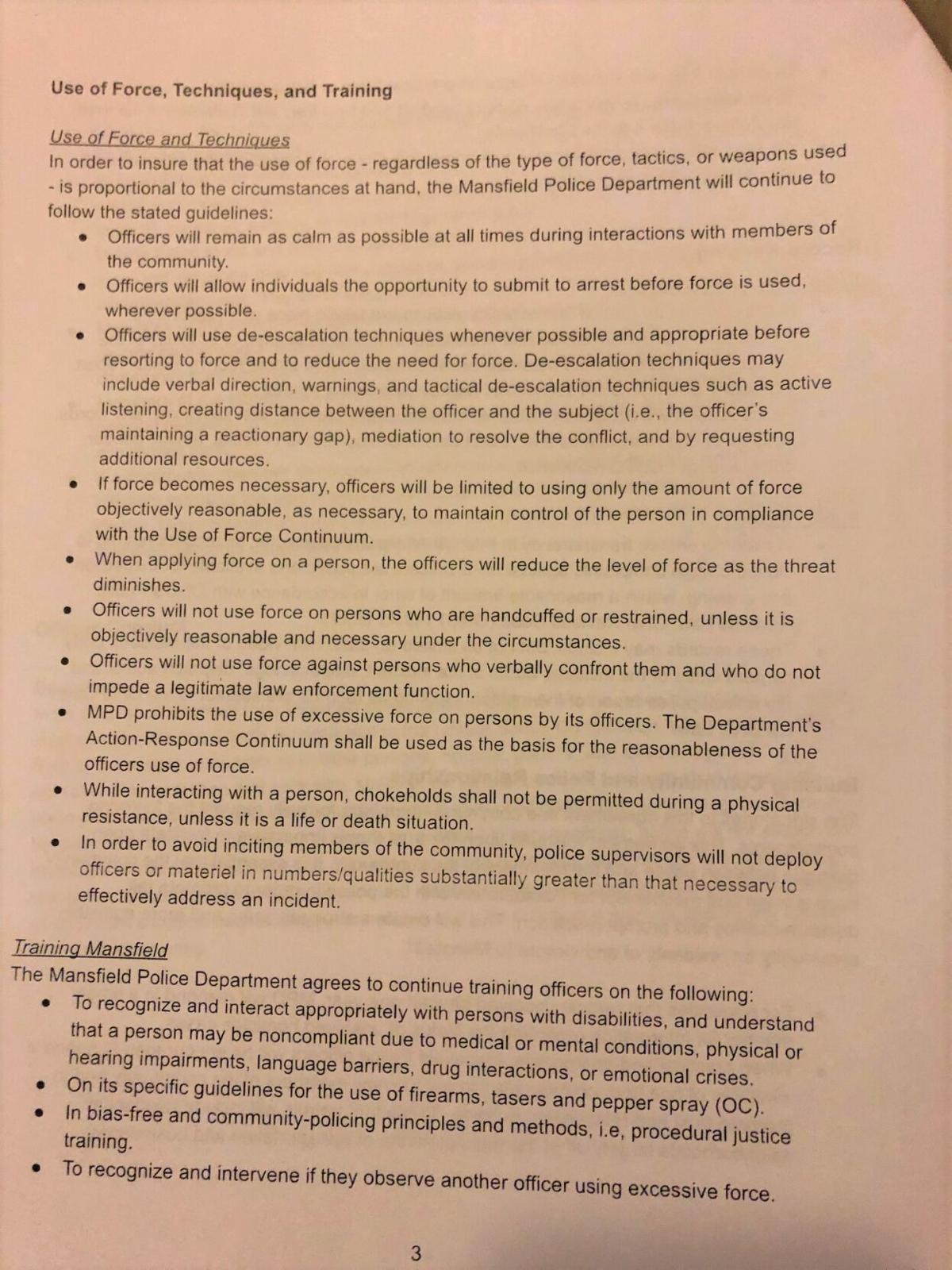 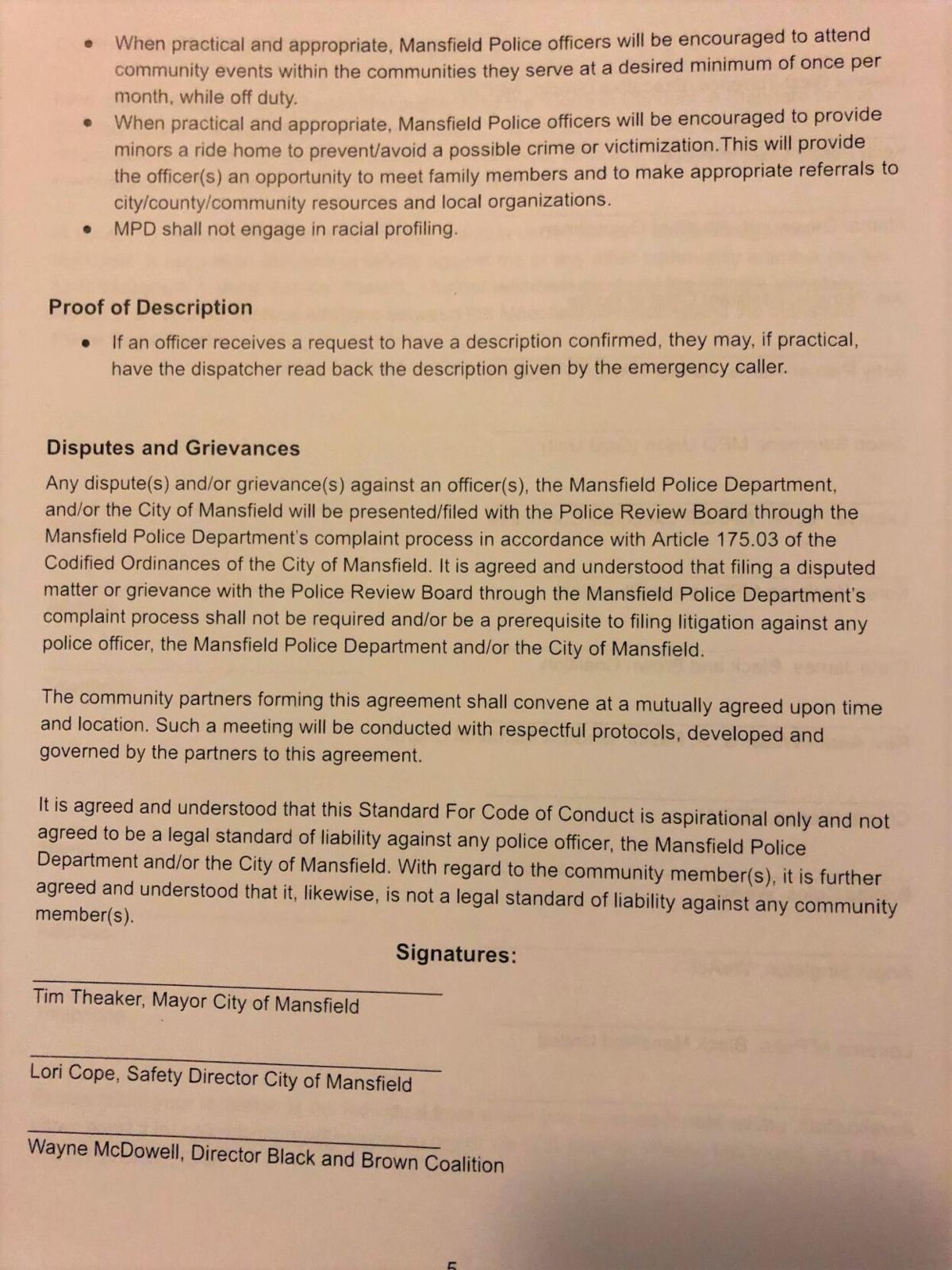 MANSFIELD -- Friday night's town hall meeting was designed to explain the new Code of Conduct, a document signed less than a month ago, setting forth standards of behavior for residents and Mansfield police officers when interacting with one another.

Coming just four days after a Mansfield officer was suspended without pay for 60 working days after he drug a handcuffed Black teen several feet, it could have been a tense gathering at Providence Baptist Church on the city's north side.

Instead, organizers and about 30 residents used the two-hour discussion to openly and frankly -- but without rancor -- discuss concerns about the police/community relationship.

There was discussion of the Oct. 12 incident on West Fourth Street that led to the suspension of Office Jordan Moore, an incident captured on video that gained wide circulation through social media.

But the group used the incident to explore substantive ways to use the new agreement as a framework for additional discussions involving community/police relations and ways to hold police accountable when the code is violated.

"Tonight is not going to be a griping session," Cobb said as the evening began. "We do want to get some understanding and clarification. Tonight's sole purpose .. we want the community's voice to be heard as we're endeavoring to work with law enforcement.

"We're not asking for any favors. I don't want any favors. All I want (law enforcement) to do is do your job. Our perspective tonight, and our narrative, should be 'simply do your job,' " Cobb said, adding that police should do their job while remaining within their protocols and guidelines.

There were no members of the police department at the meeting. McDowell said he didn't invite anyone, hoping to first explain the Code of Conduct and gauge the opinion of the community. He said he was certain Chief Keith Porch and other police leaders would meet with the community in the near future.

The chief did participate in a public forum at North Lake Park in October 2019. During that session, Porch, who took over as chief in April 2019, vowed to enforce proper conduct in his department.

"When I took over as chief, I told the division everybody is grown, everybody is an adult in this room, everybody knows right and wrong. Everybody knows the policies and procedures of this department. If you decide to step left when you should have stepped right on that policy, know that I am coming for you," Porch said at North Lake Park.

CODE OF CONDUCT: McDowell, a longtime community activist whose two brothers worked in law enforcement, went over the key points to the Code of Conduct on Friday evening, starting with the preamble:

"We agree, that, as collective members of one community, we value and respect the sanctity of human life above all else.

"We value and respect the fundamental freedoms and safeguards guaranteed in the Constitution of the United States of America.

"We value the diversity among us and are committed to treating one another with fairness, respect and courtesy.

"We commit to work with one another in the delivery of police services, with a sincere desire to listen and respond to criticism and a willingness to change for the common good."

The first two points in the preamble are essential, McDowell said.

"If police officers across this country, who engage in excessive use of force and kill people, especially young Black men, if they just adhere to that, we wouldn't have a problem, as much of a problem as we have now," McDowell said.

As he went over the document (see the full document at the bottom of this story) that spells out behaviors, McDowell stressed the relationship is a two-way street, requiring respect and effort from police officers and members of the community.

"Police cannot effectively perform their duties or function without community assistance ... involvement. If crimes are being committed, if we know there is a drug house across the street, if we don't say anything, we are hurting our own community," McDowell said.

For example, community members "will make an effort to ensure the officer will feel safe and can complete any official activity without fear of personal harm," the code said.

The code includes a statement indicating members of the community "agree to act diligently to identify crime and criminal behavior, to cooperate fully with all investigations, and to assist in keeping the community safe."

Also, officers "will not use force against persons who verbally confront them and who do not impede a legitimate law enforcement function" and "will allow individuals to submit to arrest before force is used against them, wherever possible."

The code also rules out racial profiling by officers and encourages more foot patrols by officers "to get to know members of the community and to promote trust and relationship building."

In the code, and in the department's policies, chokeholds are not permitted during "a physical resistance, unless it is a life-or-death situation."

ENFORCEMENT: Davenport credited Porch for the decision to suspend Moore for 60 working days, which began Oct. 20 and runs through Jan. 11, 2021. He will also be required to undergo additional training.

Davenport said unions are valuable tools to protect workers. However, he said police union contracts around the country afford officers a great deal of protection and that disciplinary actions are often overturned in arbitration.

"What we have to look at, and what is reality, is in these particular situations, the extent of protection in police contracts have a direct correlation to police violence and other injustices we as a community may feel at the hands of police," Davenport said.

"The mechanisms that are designed for disciplinary action are really toothless because of the ability of the (police) union to do what they are able to do. Police unions are extremely powerful here in our society.

"The robust protections afforded to officers like qualified immunity and things of that nature embolden them and allows them to do things (like the dragging incident on West Fourth Street) even though they see cameras there recording what they are doing. They know they are protected so they feel they can do it," Davenport said.

Davenport said he understands there are community members who felt Moore should have been fired, partly because the 24-year-old law enforcement has been disciplined previously during his two years on the force.

He said the collective bargaining agreement between the city and the police unions require the MPD leadership to consider each disciplinary incident on its own merits without considering what's happened in the past.

"I am 98 percent sure if (Moore) had been fired, he would be right back through arbitration," Davenport said. "You (have to) imagine 12 straight weeks of no pay and how that can hurt you financially.

"We were thinking a 30-day suspension. The reality is (Porch) went way out on a limb. That 60 days is an extremely stiff punishment. I also want to give kudos to the union. As of yet, they have not stepped in," Davenport said.

"I do believe what (Porch) did was right," Davenport said.

The councilman cited a statistic from Minneapolis, the city where police killed George Floyd in May, sparking national protests against police violence. Davenport said there were 2,600 resident complaints against Minneapolis police since 2012.

COMMUNITY DISCUSSION: Residents asked a variety of questions and offered a number of opinions and suggestions, including the need for much wider circulation of the Code of Conduct, including church pastors sharing it with their congregations and Mansfield City School officials sharing it with students and teachers.

Crystal Davis Weese, a member of the Black/Brown Coalition, asked what Moore, and other officers, are required to undergo in terms of cultural competency and other training sessions in dealing with the community.

"I want to know, or I solidly want to be a part of the implementation of his training. Do we get to know what that re-training is?," she asked. "If you work in our neighborhoods, you need to treat us with respect. If you are an officer, we are paying you to do as such."

Another resident asked why the Code of Conduct allows police to use chokeholds, which she said have been banned in many other communities. The code allows Mansfield officers to use them "in life-or-death situations," which she said opens the door for an officer if they implement such a use of force.

"That should be taken out (if the code is revised.) We're not killing police officers and jacking them up at the rate they are us, right?" suggesting the officers' conduct should have been the primary focus of the code and that officers should be trained in advance in cultural competency and recognizing bias.

Williams-Stillwell said she works with first responders, school principals and others, helping them to recognize their prejudices.

"When they see an African-American, they see them as a threat, rather than in crisis. I constantly have to tell people ... cultural competency teaches you (about) your prejudices," she said.

"It shows you do prejudge, that there are things you are thinking about. We need to stop acting like there are blinders ... 'I don't see color ... there are no cultural differences,'" she said.

In the Oct. 12 incident, the 17-year-old was arrested when he tried to intervene in the arrest of his father.

Williams-Stillwell said it's likely the teenager was in crisis, wondering and worried about what was going to happen to his father, spurring him to cross the street toward the arresting officers.

She said training of young people must go with the Code of Conduct, that there are skills that need to be taught.

Another audience member asked if the Black/Brown Coalition can work with police to include local residents to assist in the training of officers.

"I want to be part of that. I want to sit down with police officers and let them know what they are doing wrong. It's great to have the academics come in and give them the cultural bias training and all that, but they need to see someone they see riding by every day," the man said.

"They have to be open to it ... that's the ultimate respect. Listen. Don't get mad. Don't get an attitude. Let's have this conversation," he said.

At the end of the discussion, Cobb pledged to make Providence Baptist Church available for future meetings and praised McDowell for his years of work in the community.

"We are stronger together. It is our anticipated hope, our prayer, that we will be able to have police Chief Porch here to ask some direct questions. I am one of those pastors crazy enough to believe that prayer changes things. If we pray hard enough, maybe we can get that to transpire," Cobb said.