The unpaid suspension for Officer Jordan Moore begins Tuesday, Oct. 20, and runs through Jan. 11, 2021, according to a press release. Moore, who joined the department in 2018, will also undergo additional training, the chief said Monday afternoon.

Moore, 24, was placed on paid administrative leave beginning Oct. 17, pending a pre-disciplinary hearing. He is a second-shift patrol officer  assigned to the patrol section of the department's community services bureau.

Porch said the department conducted a "complete and thorough review of the arrest incident that occurred at 501 W. 4th Street on Oct. 12," including all available audio/video material, officer statements and reports. 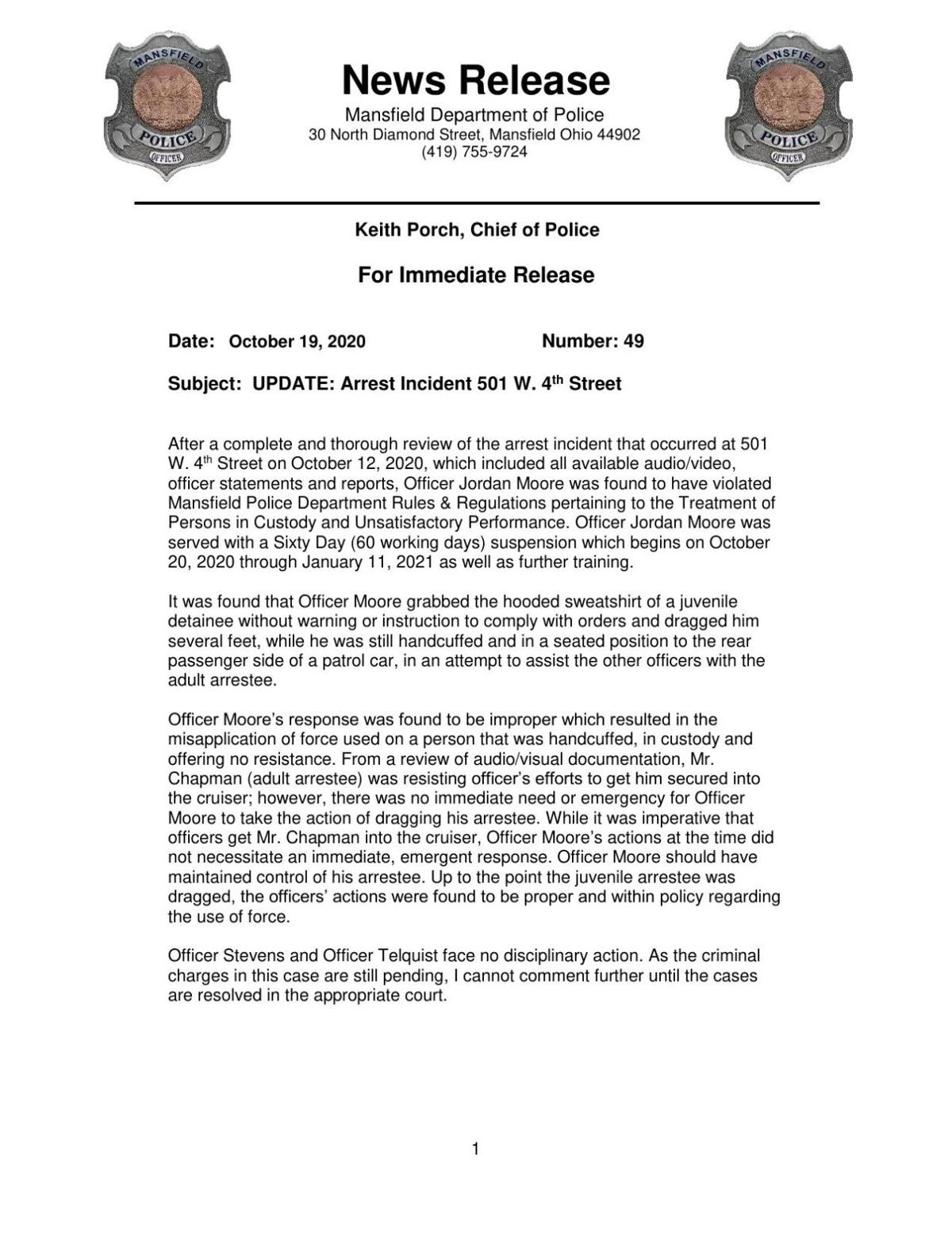 "It was found that Officer Moore grabbed the hooded sweatshirt of a juvenile detainee without warning or instruction to comply with orders and dragged him several feet, while he was still handcuffed and in a seated position to the rear passenger side of a patrol car, in an attempt to assist the other officers with the adult arrestee," Porch said.

"Officer Moore’s response was found to be improper which resulted in the misapplication of force used on a person that was handcuffed, in custody and offering no resistance."

A bystander recorded video of the incident, which showed the arrest of a Black Mansfield man and the 17-year-old, reportedly the man's son, who was reacting to the adult's arrest.

Porch said the adult Black man being arrested was resisting efforts by other officers who were trying to get him into a police cruiser.

"However, there was no immediate need or emergency for Officer Moore to take the action of dragging his arrestee. While it was imperative that officers get Mr. Chapman into the cruiser, Officer Moore’s actions at the time did not necessitate an immediate, emergent response," Porch said. "Officer Moore should have maintained control of his arrestee.

"Up to the point the juvenile arrestee was dragged, the officers’ actions were found to be proper and within policy regarding the use of force."

Moore is the only officer on the scene who faces disciplinary action, the chief said.

"As the criminal charges in this case are still pending, I cannot comment further until the cases are resolved in the appropriate court," Porch said.

It is not the department's first disciplinary action against Moore this year. In 2020, according to his personnel file:

-- Moore received an oral reprimand in the wake of a March 30 call after which the officer failed to complete a general offense report for domestic violence, a violation of the department's rules and regulations. A citizen's complaint for unsatisfactory performance by Moore was also sustained by the department after review.

-- Moore received an oral and written reprimand after a March 28 incident upon making an arrest following a foot chase. Moore was observed on a cruiser camera using profanity toward the suspect, cited for conduct unbecoming a police officer and also a lack of courtesy.

-- Moore was suspended for four days in May after an April 14 call during which he reached the speed of 92 miles per hour on West Cook Road and Lexington Avenue in his cruiser while responding to a domestic violence situation "that did not warrant an emergency response with information given." The department ruled, "Officer Moore failed to drive in a prudent manner and obey all laws and divisional orders pertaining to such operation, creating a substantial risk of danger to the motoring public, to himself and to the property of others."

-- Moore was suspended for three days in July after for his work investigating a May 25 hit-skip accident. Moore responded to the scene, picked up a damaged stop sign and stood it back in place. He moved multiple damaged motor vehicle parts to the side of a parking lot and didn't photograph or collect evidence. The report also said Moore submitted a "property damage" report instead of the proper hit-skip crash report.

Several citizen complaints have been filed against Moore during his tenure with the department, most for his "response to resistance," though the department's internal investigations found no misconduct had occurred or could be proven.

Moore is a native of Willard who graduated from the police academy in May 2017. He began his law enforcement career in New Washington before joining the Sandusky Police Department.

When he was sworn into the MPD in July 2018, Moore said he wanted to help protect children.

"I wanted to get involved with the city of Mansfield due to my proactive abilities to protect the ones that physically can't or mentally can't," Moore said at the time. "To be able to give them what they need -- there's no greater feeling."

Moore was one of four officers nominated for a department award in September for their efforts to assist a family whose vehicle was stuck in flood waters at North Mulberry and West Sixth streets. He and the other officers waded in water chest deep to rescue a woman and her two children, ages 12 and 9, from the vehicle and carried them to safety.

He was also one of two officers recommended for special commendation after a car stop in July. Moore and the other officer found a loaded handgun beside the front driver's seat and a second stolen handgun elsewhere in the car. They also found a backpack that contained drugs packaged for sale, including pills, crack cocaine, heroin and marijuana.

"(The officers) displayed investigative prowess (and) initiative and followed tactically sound techniques removing two guns and various drugs from the streets and likely preventing a future violent crime or death," the report said.

The Mansfield police officer seen on video Monday dragging a handcuffed teenager by his shirt has been placed on paid administrative leave.