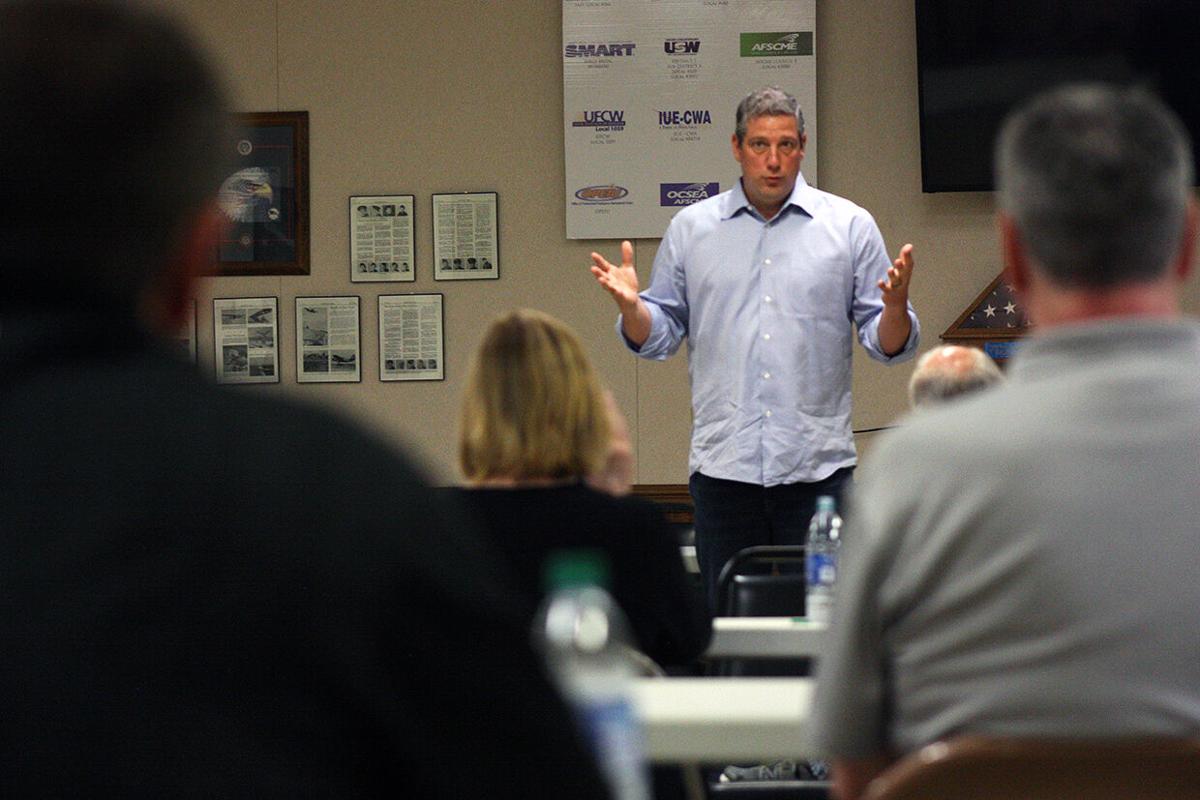 Rep. Tim Ryan speaks to workers at the United Steelworkers (USW) Local 3057 union hall in Shelby on May 24. 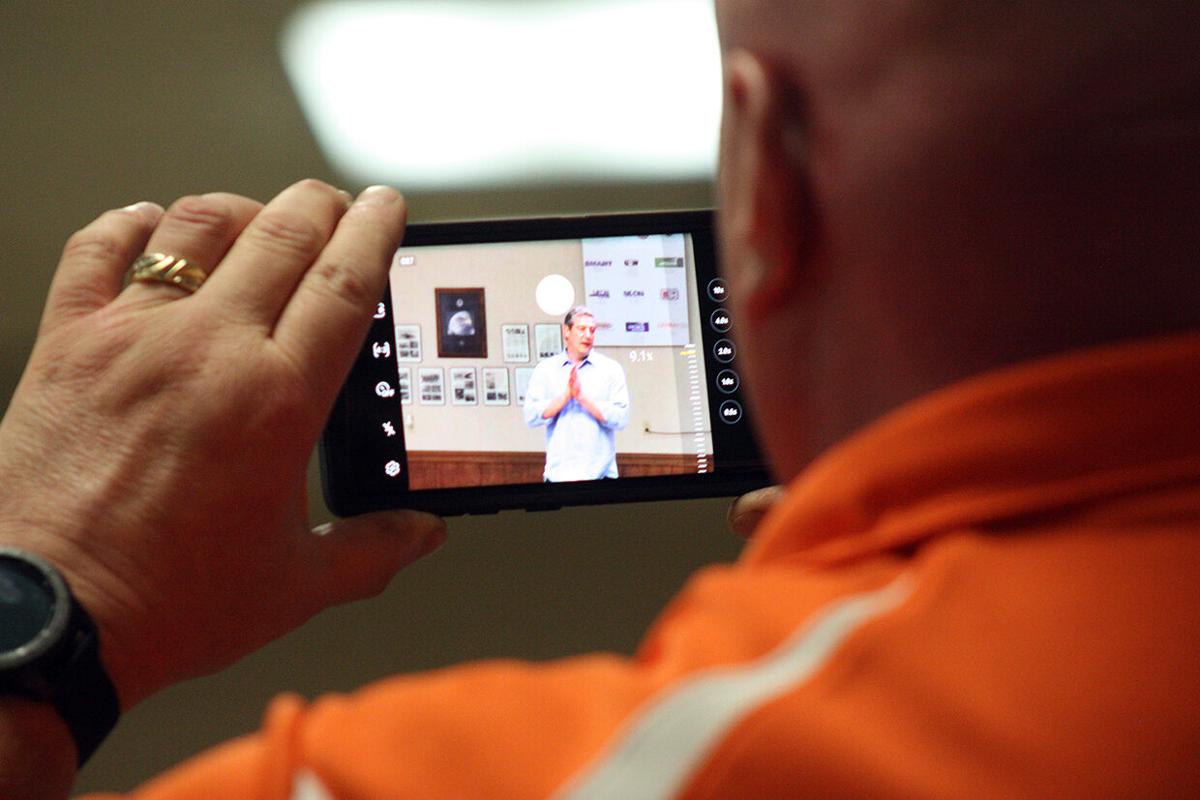 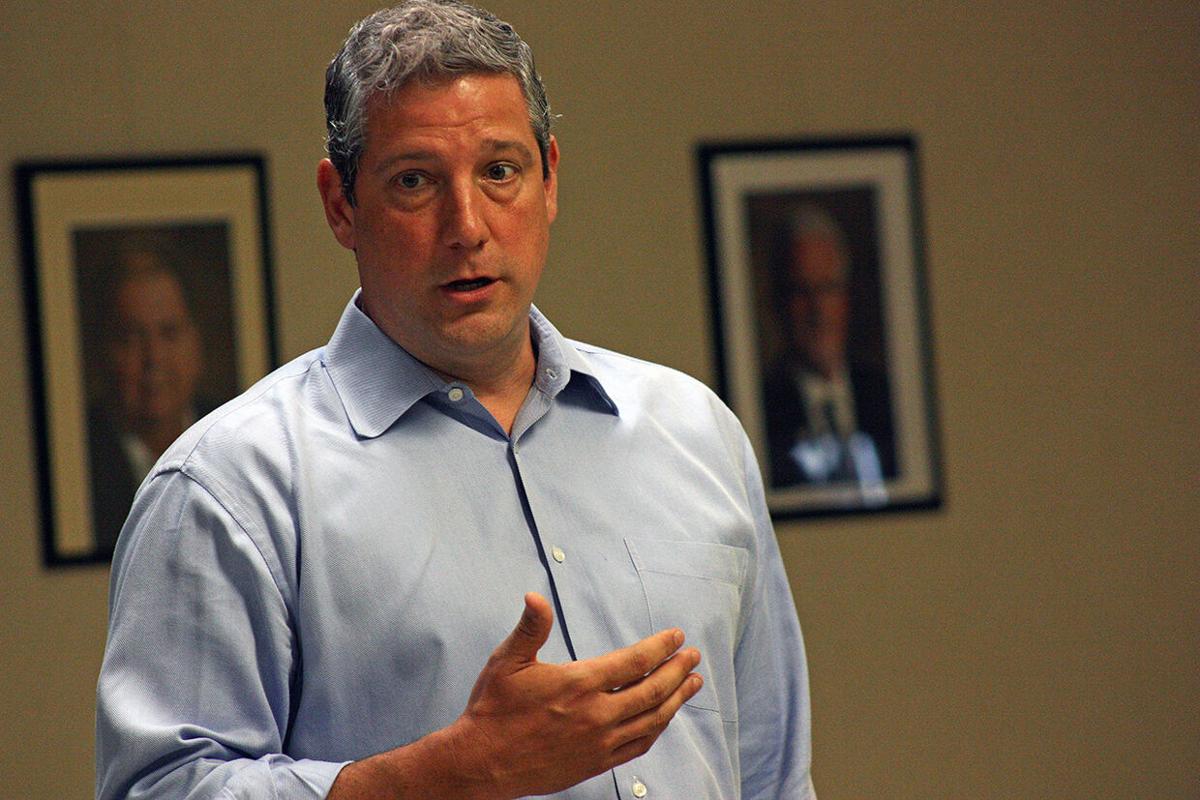 Rep. Tim Ryan is running to replace Rob Portman in the U.S. Senate.

SHELBY — The story's always the same.

Seven hundred tons of metal a day. Now you tell me the world's changed, once I made you rich enough to forget my name.

Democratic Congressman Tim Ryan quoted these words from Bruce Springsteen's "Youngstown" to the workers seated in front of him at the United Steelworkers (USW) Local 3057 union hall in Shelby on Monday.

"It's on the back of the middle class that won the wars, that built the economy, that built the big cities. And then when times changed we forgot who everybody was," Ryan said. "I'm running because it's time this country remembers your hard work."

Ryan represents Ohio's 13th district, including the song's namesake city. But he visited Shelby on Monday as part of his campaign for a seat in the U.S. Senate.

Monday's stop at the union hall, plus a tour at ArcelorMittal, was part of Ryan's "Workers First Tour" to hear from workers in every corner of the state about the challenges they are facing.

"If you're out there busting your rear end to try to make ends meet for you and your family, to try to contribute to society, you should have a pension, healthcare, good schools for your kids," Ryan said. "Are we really asking for too much?"

Ryan, 47, launched his campaign for the U.S. Senate in April, the first Democratic candidate in the race to succeed Republican Sen. Rob Portman, who announced in January he would not be seeking a third term in 2022.

"This is a tough time to be in public service," Portman said in a statement, citing hyper-partisanship in Congress.

Ryan is currently serving his 10th term in Congress. He briefly competed for the Democratic presidential nomination in 2020, and attempted to unseat then-House Minority Leader Nancy Pelosi in 2017.

With the upcoming 2022 Senate race the first major election in a post-pandemic world, Ryan emphasized his campaign's message of putting workers front and center. He asked that unions work with businesses to hire more people, and let workers "in on the action" to resuscitate the middle class.

"I think this campaign in Ohio is going to be ground zero," Ryan said. "Where do workers go in Ohio when they get a choice between a Tim Ryan/Sherrod Brown, worker-based candidate, and a bunch of people who want to talk about Dr. Seuss and every other crazy issue that is irrelevant to the needs of the vast majority of the people in this state?"

Ryan, who serves as co-chairman of the Congressional Manufacturing Caucus, comes from a working class family. He spoke of his grandfather working as a steelworker, yet still having time to be an active member of his community.

"He was treasurer of the union, head usher for the church, and ran the beer tent at the church festival every year, because he wasn't working seven days a week, 18 hours a day to try to make ends meet," Ryan said. "He had a good job where he worked hard and did it right, and he still had time to participate in the other things important to all of us."

This resonated with Norm Shoemaker, United Steelworkers Local #3057 president and president of the Mid-Ohio Area Labor Council representing seven counties, including Richland. Shoemaker said most people in the room had the same problem, working a seven-day a week operation, because of the labor shortage.

"We can't find workers, and for most places that need electricians and other laborers, we can't find skilled workers. We need training," Shoemaker said. "We need people to get back to work. We've got a backlog like we've never had; we're booked at least eight months out, and we don't have workers to do the job."

Ryan said he wanted to reset the politics of and the economic positioning of the middle class in the United States as the world comes out of the COVID-19 pandemic.

"There's a reason our stop in this county is in the union hall, because it's going to start here and we'll build it out from here," he said. "I'm not bullshitting you, I need your help. We're not going to do this without you."

Dustin Beck, a member of United Steelworkers in Marion, said he first heard of Ryan after his headline-making speeches recently given on the House floor.

"It's good to see a Democrat with a little fire, not afraid to speak out. I'm pretty committed to you after some of the things you've said on the floor," Beck said. "My thing is gun rights - I couldn't support someone who's not for the second amendment."

Ryan said he did not want to take guns from law-abiding citizens, and supported basic background checks for firearm owners, noting he wanted to keep firearms "out of the hands of bad people."

Susan Gentille, president of the Richland County Democratic Women’s Caucus, asked how Ryan might support workers by also supporting women in the workplace.

"Women were hit hardest during the pandemic," Ryan said. "We need make sure working families can afford childcare...and wages should be high enough where if a parent wanted to stay home, you're making enough money that someone could actually stay home.

"If we want to build an economy on family values, what's more important than taking care of our kids?"

Alan Koser of the Ohio Bureau of Workers' Compensation, asked Ryan about his stance on immigration. Koser shared that his wife immigrated here legally, but it cost about $3,000 for her to become a U.S. citizen.

"I suspect a lot of people can't afford to become a U.S. citizen," Koser said. "I want people to do it legally, but why would we not want people to come to this country?"

Ryan said he supported new technology-based border security to keep "criminals and terrorists" from coming into the country. He also supported a streamlined way for people to become citizens - especially those who have overstayed their visas.

"Then we can start to unionize a lot of these workers and get wages up," Ryan said. "Who benefits most from undocumented workers? The businesses. When we have a system that's actually working, we can start driving wages up."