In the past week, John said, the county has recorded 52 additional COVID-19 positive tests and eight additional hospitalizations, based on numbers she received from Richland Public Health earlier Tuesday.

Gov. Mike DeWine announced on July 2 a four-tiered, color-coded Public Health Advisory System, designed to measure the spread of the coronavirus on a county-by-county basis. 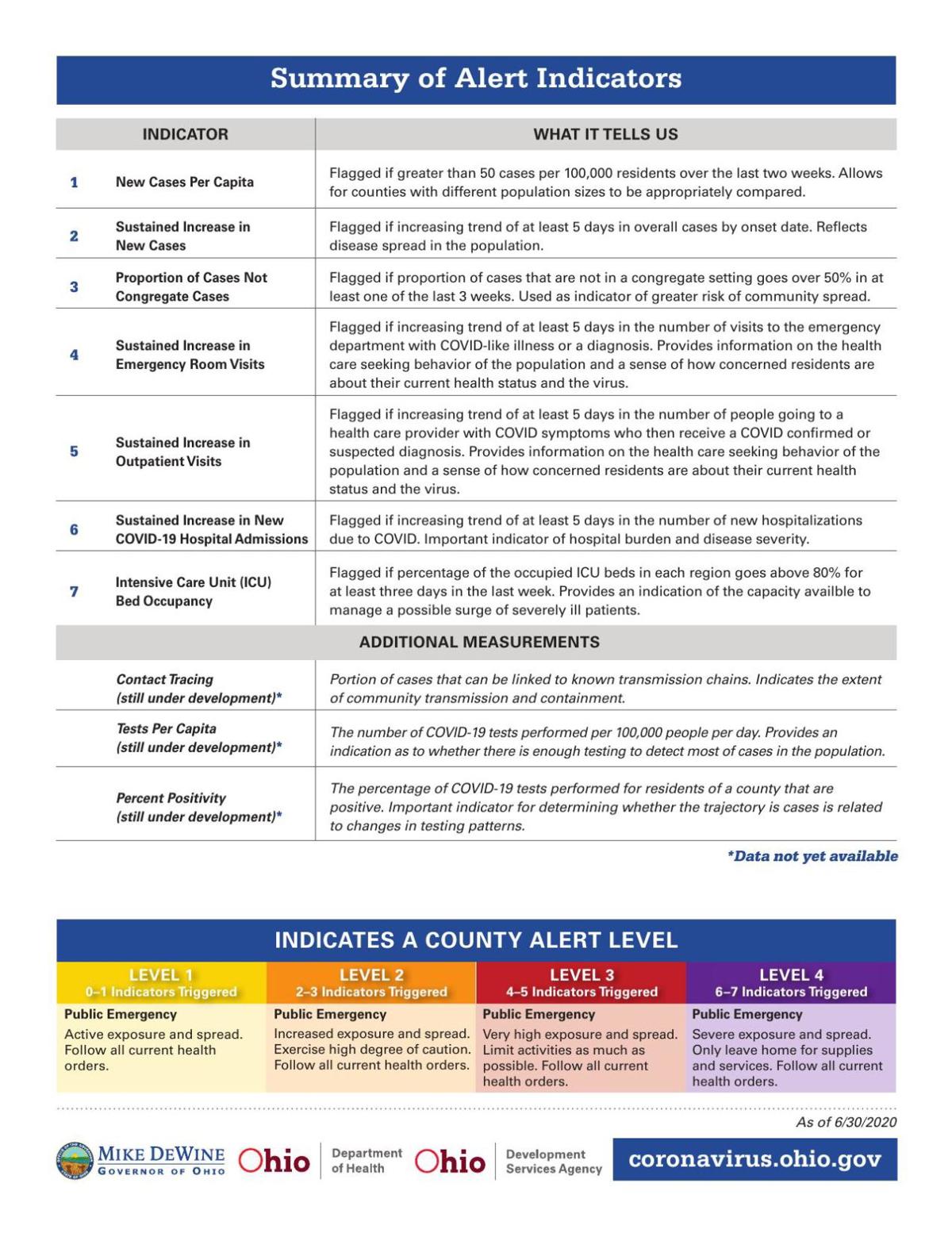 Richland County was listed as "orange," or level two, in the initial announcement and remained at that same level when the governor updated the numbers on July 9.

Should Richland County become "red," or level three, when DeWine provides a weekly update Thursday at 2 p.m., masks will become mandatory in public settings under the governor's rules.

When asked if RPH expected a status change this week based on the increases, John said, "Yes, they are preparing for the potential for a color change Thursday."

Such a change would take effect Friday at 6 p.m., under the state guidelines.

As of Tuesday morning, John said, the number of positive COVID-19 tests in the county since the pandemic began in March had grown to 391, up from 339 a week ago, an increase of 15 percent in one week.

The number of hospitalizations in Richland County since the pandemic began rose to 58, up 16 percent in a one-week time frame.

RPH also reported on Monday the county's sixth COVID-19 death, though the death occurred on June 24. 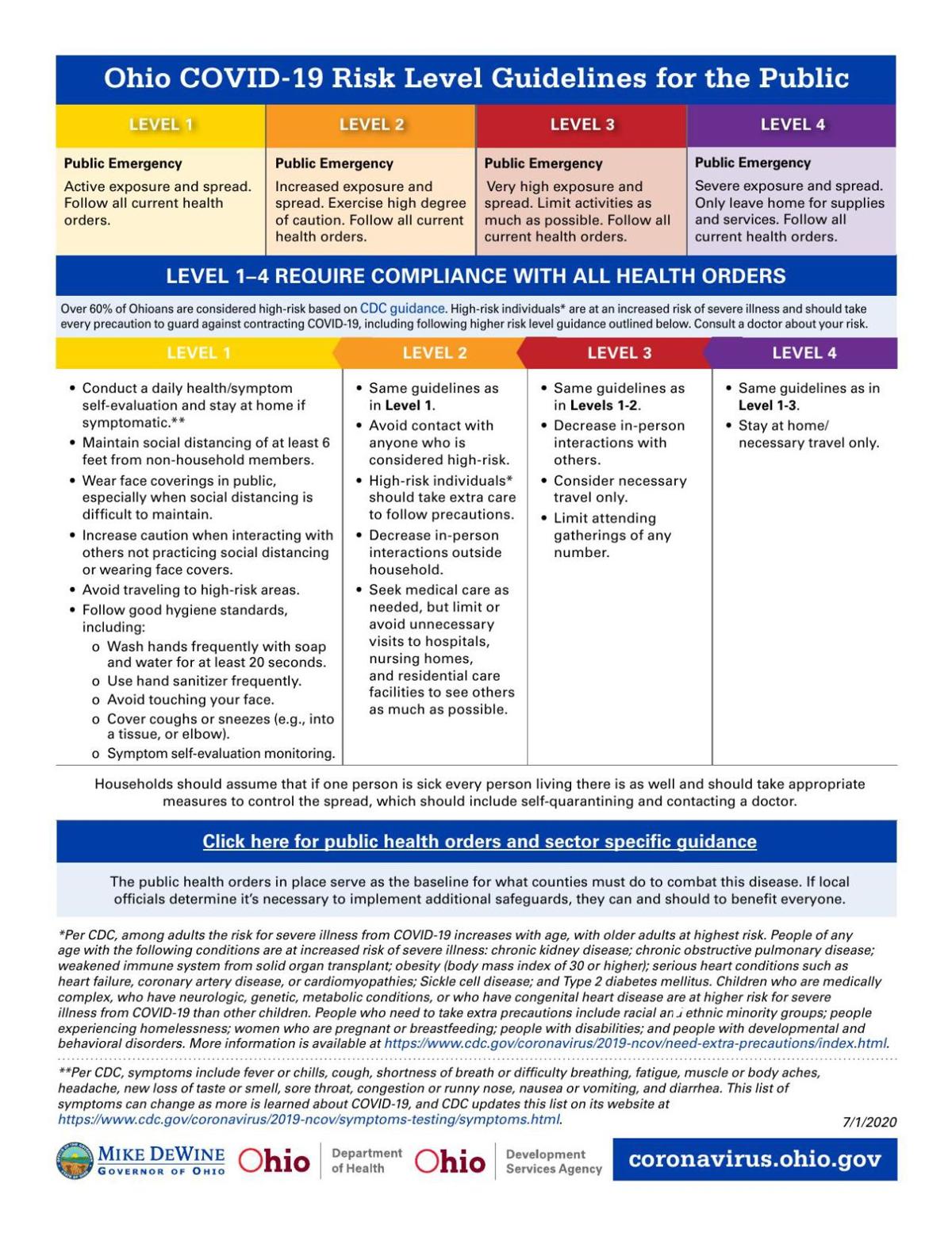 Under the state's "risk level guidelines," residents in "red" counties should reduce in-person interactions with other, consider necessary travel only and limit attending gatherings of any number.

There were 12 "red" counties last week. Ashland, Knox and Crawford counties have been "yellow," or level one, each of the first two weeks the system has been used. Huron County was "red" in the first week, but went to "orange" in the second week.

Last week, commissioners expressed frustration at a lack of communication from the state. John said DeWine's office has since reached out to RPH Commissioner Sarah Humphrey to pass along updated information.

John also said the Ohio National Guard would be in Richland County this week and next week doing testing in nursing homes and long-term care facilities, which were scheduled to re-open to visitation later this month.

Commissioner Tony Vero said he had not received answers from the state regarding his questions on how "recovered" patients are counted on the color-coded scale. He also said testing has continued to go up, likely resulting in additional positive results.

John said Humphrey was considering a local task force to discuss COVID-19 related issues, which could include online meetings to discuss how the county is responding to the pandemic.

The health commissioner has also discussed with local school district how the "color" status of the county could impact plans to begin the school and that plans need to in place to meet any of the state's requirements.

Also on Tuesday, Vero reported he has received information from three local school districts regarding the number of "mobile hotspots" they will need when the school year begins to  help facilitate mobile learning.

Vero said Mansfield City Schools is planning to purchase 200 while Madison Local Schools and Clear Fork Local Schools have each requested 175 of the devices, which will be supplied to families in each district that have difficulty with internet access.

Vero has asked each district to have numbers to him by Friday. He will then bring a final proposal to his fellow commissioners.