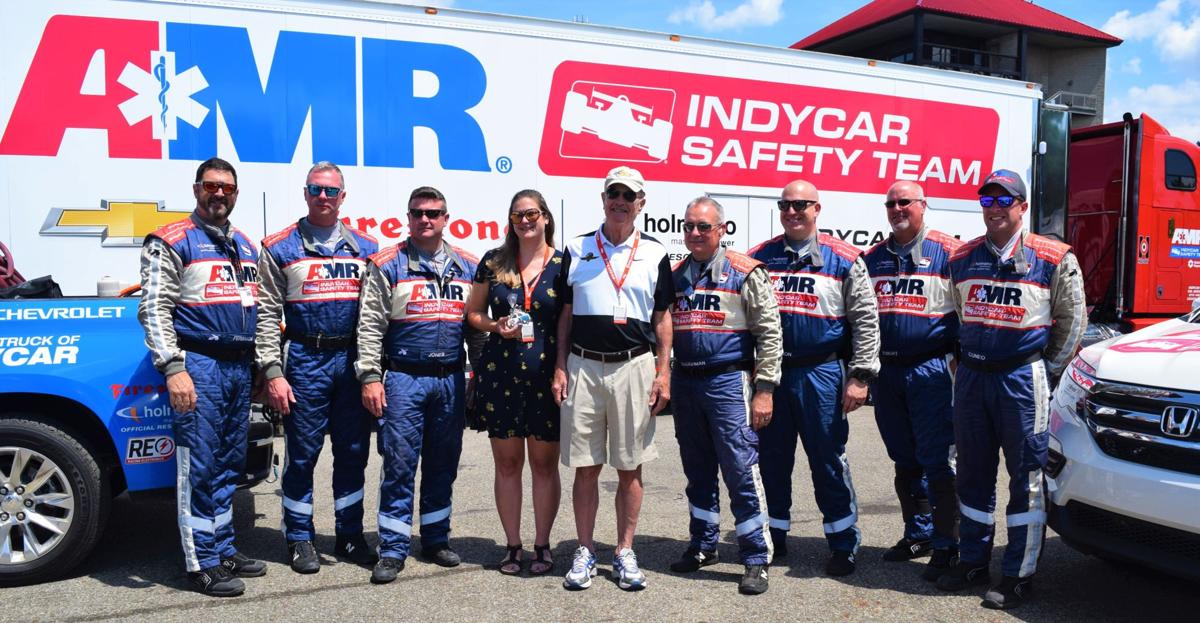 Gerry Schroder (center) and his daughter, Kathryn, are joined by members of the AMR IndyCar Series Safety Team on Saturday afternoon at the Mid-Ohio Sports Car Course. 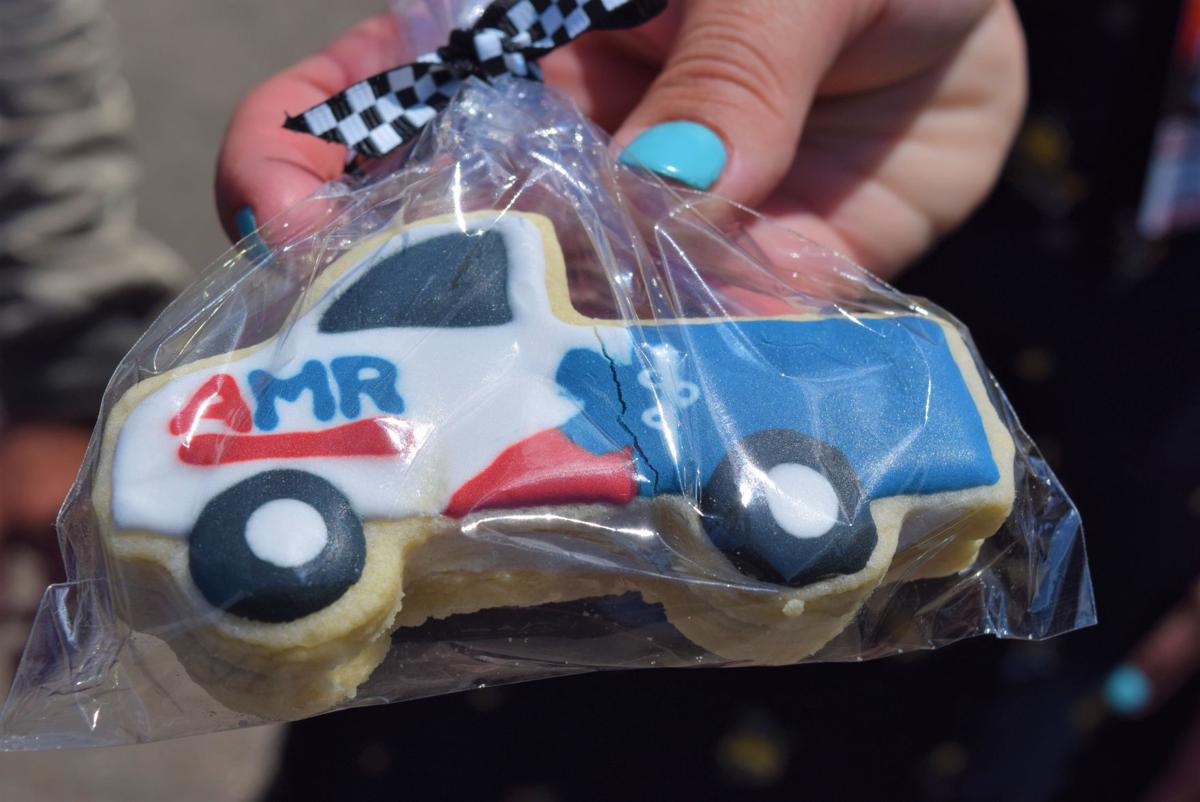 Kathryn Schroder baked and brought "AMR" cookies for members of the AMR IndyCar Series Safety Team at Mid-Ohio this weekend. 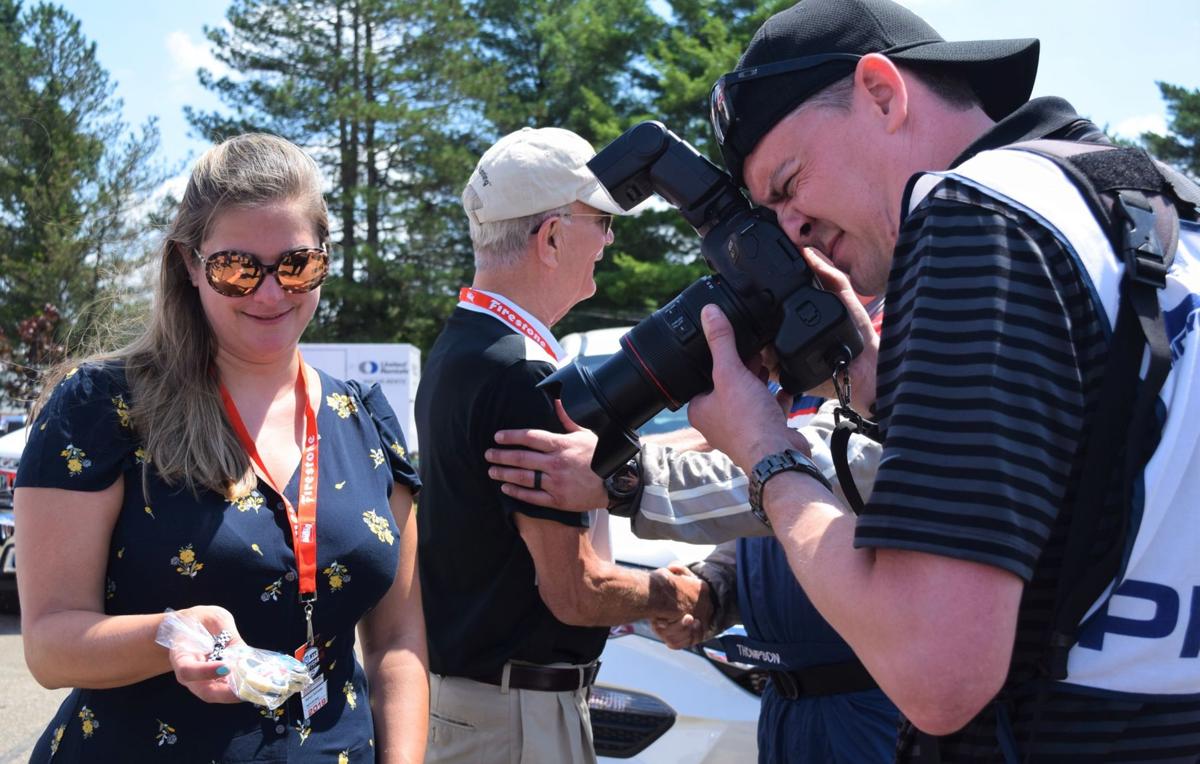 Gerry Schroder (background) and his daughter, Kathryn, came back to the Mid-Ohio Sports Car Course on Saturday, one year after the Virginia resident suffered full cardiac arrest while walking in the pits.

LEXINGTON -- Gerry Schroder returned to the Mid-Ohio Sports Car Course this weekend with a trio of new things.

The McLean, Virginia resident came to the NTT IndyCar Series Honda 200 with a new pacemaker, a new lease on life and a new appreciation for emergency medical personnel.

Schroder, 73, was walking in the pits the day before last year's IndyCar race, when he experienced full cardiac arrest and collapsed face first onto the asphalt.

"The Indy Cars were just getting to practice, much like today," Schroder said Saturday afternoon. "I knew I had a heart condition (including an older pacemaker), but I never had anything like this.

"It really hit me like a wave. I knew I was in trouble. I pushed someone out of the way and said I have to sit down. I sat down on the wooden retaining wall .. that's the last thing I remember.

"I did a face plant right on the asphalt. But I don't remember that."

Schroder is a huge fan. He's attended more than 50 Indy 500 races and travels to several IndyCar races a year. But all that got pushed aside in a terrible moment.

Schroder was walking with his daughter, Kathryn, who immediately looked for emergency personnel. She also knew her father was in trouble.

AMR TO THE RESCUE: She didn't have to look far as a trio of AMR IndyCar Safety Team members rushed to the scene.

"I watched (my dad) fall. It was not fun," she said. "You could tell he wasn't really present when he fell ... because of the way he was laying. I felt like (the AMR rescue workers) came out of nowhere.

"I didn't even see them running ... they were just there."

Tim Baughman, who in January became the director of the AMR IndyCar Safety Team, recently retired as an assistant chief with the Indianapolis Fire Department. He said he has worked with IndyCar racing for two decades. Baughman was working on the course at that moment, but said his team members working in the pits that day did their jobs.

"Our guys just happened to be there right on top of it," he said. "They started CPR. They called on their radios and Mr. Schroder's daughter called 9-1-1. So we had two kinds of communication to get the ALS ambulance on the way.

"They got him hooked to a monitor and were breathing for him. After a few minutes of CPR, they shocked and him and restarted his heart."

Schroder said it all seemed a blur.

"I woke up with the AMR gentlemen around me. They were terrific," he said. "My daughter said it's like they just popped up out of the ground. They were there in seconds and I am so grateful they were."

His daughter, who baked and brought "AMR" cookies for the rescue workers on Saturday, admitted it was a scary moment.

"I remember thinking, thank God it happened here. Otherwise, we would have been much further away from any sort of medical intervention," she said.

NEW PACEMAKER: Schroder was taken to OhioHealth Mansfield Hospital and treated there. He later returned to his home not far from Washington, D.C., and underwent further treatment, including a new pacemaker, defibrillator and change in medicine.

Schroder began a lengthy recovery period, including three months in which he was not allowed to drive.

"It wouldn't be good to be driving 70 miles an hour next to an 18-wheeler and suddenly lose consciousness," he said.

One of his therapy goals was to recover in time to attend the Circuit of the Americas race this spring in Austin, Texas. Traveling with his brother, Schroder succeeded and met with Baughman and other AMS team members.

He doesn't know for sure if he met the actual men who saved his life.

"(Baughman) told me it's a team thing and that the entire team should get the credit," Schroder said. "I met 16 of them (in Austin). They wouldn't tell me who it was. They want the whole team to get credit. I may have met them and don't know it."

Baughman said AMS team members are paramedics and firefighters and decline the spotlight.

"These guys are very humble about what they do," he said. "They will tell you they were just doing their jobs. When we are at a track, whether an oval or a road course, part of our procedure is to make sure everyone is OK. They are really keeping their eyes open for everything."

Baughman said he and AMR team members are thrilled to see Schroder.

"Every person I know that has had (that kind) of life-changing event in their life ... they have anxiety about it. He is just celebrating every new day as if it was a day he would not have had. He is very grateful," Baughman said.

With more than a half million people trained in the last few years, Baughman asked Schroder if he would help promote the life-saving procedure while he was back at Mid-Ohio.

"I will do whatever he wants," Schroder said. "I am just so grateful they were there. My wife is a nurse ... she didn't tell me this at the time ... but I died that day.

"It gave me a much greater appreciation for what they do on the track. But even more so, most people, myself included, when you see an emergency vehicle (on the streets), you pull over and let them by.

"But you don't really appreciate what's happening, what you're seeing.  I have much greater respect now even seeing them go by. They are heroes."

Veteran racer Scott Dixon held off his hard-charging rookie teammate on Sunday to win the NTT IndyCar Series Honda 200 at Mid-Ohio, extending his own record with six wins at the course near Lexington.