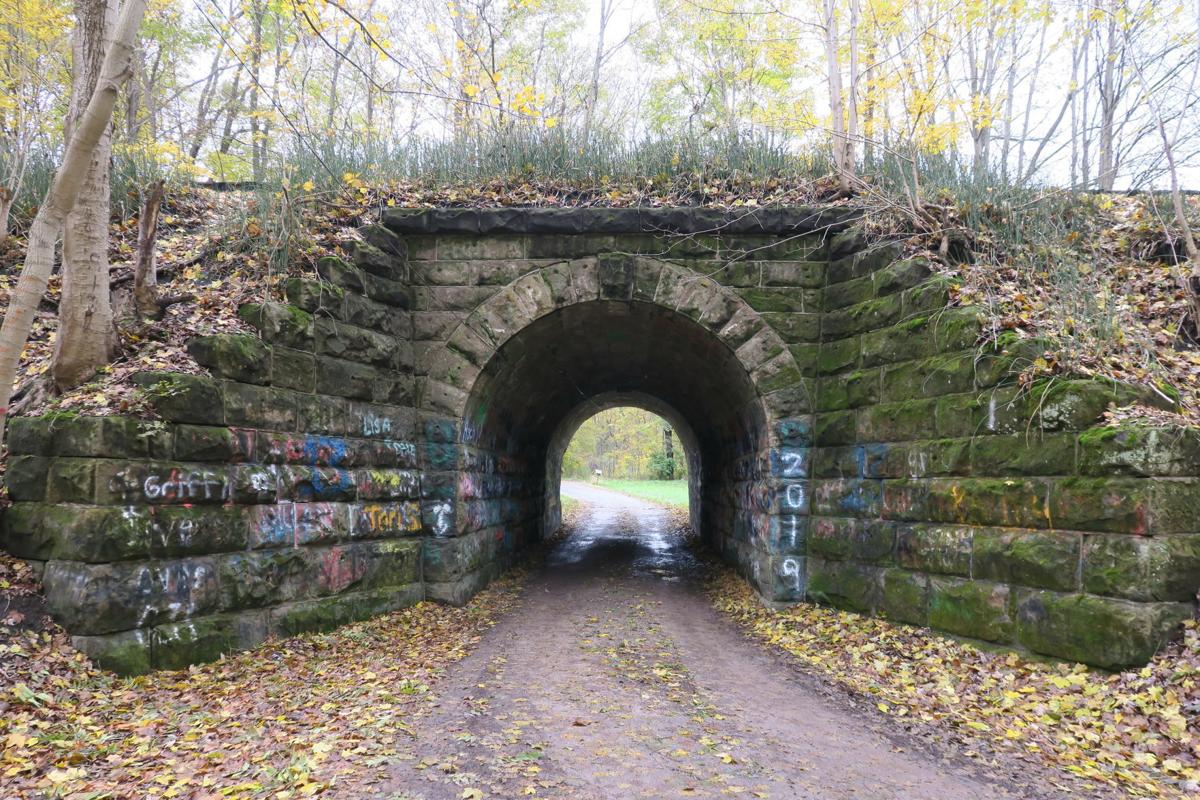 Legend has it this tunnel over Milton Township Road 1356 is haunted. 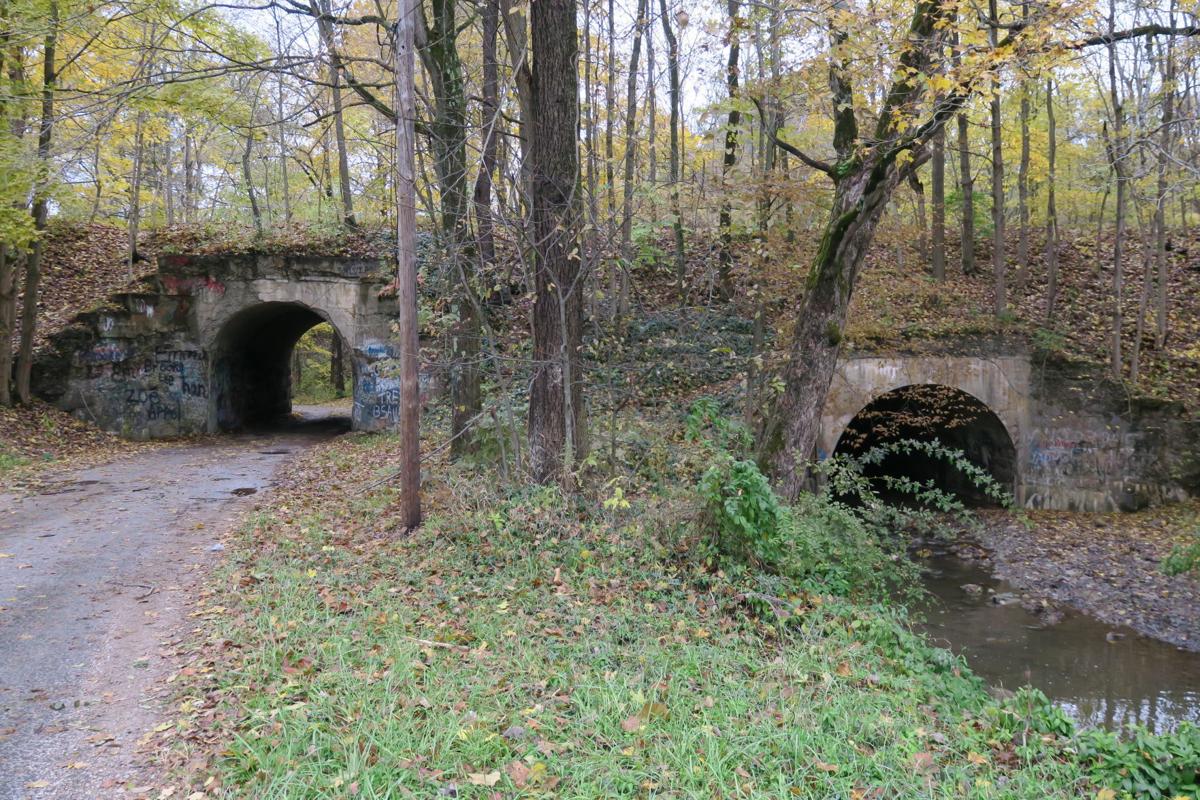 A railroad bridge spans Milton Township Road 1356, as well as a creek that runs parallel to the road.

EDITOR'S NOTE: This story is in response to a reader-submitted question through Open Source, a platform where readers can submit questions to the staff. Ashland Source reader Linda Geaslen asked, “There is a tunnel on Township Road 1536. I heard it was haunted."

MILTON TOWNSHIP -- Set out on a ghost hunting expedition in Ashland County and the tunnel on Township Road 1536 will likely be on your must-see list.

Legend has it that if you park inside the tunnel at night, turn off your headlights and put the car in neutral, "spirits will come and push your car all the way through the tunnel and out the other side."

That's a description from James A. Willis, author of "The Big Book of Ohio Ghost Stories." The legend can also be found on the website of Ohio Exploration Society under the title "Ashland County Hauntings & Legends."

Perhaps that's why Ashland Source reader Linda Geaslen wrote to us on Open Source, asking, "There is a tunnel on Township Road 1536. I heard it was haunted."

So this week, with Halloween here, I grabbed my camera and headed for the supposedly haunted spot.

The "haunted tunnel" is part of a stone bridge located about half a mile west of U.S. 42 on Milton Township Road 1536, just south of Ashland.

The bridge appears to have been built for the Ashland Railway, as the railroad runs over the bridge's two arches. One arch spans a creek that runs parallel to the road. The other arch spans the road, which narrows to one lane as you pass through the tunnel.

Full disclosure: I went on my ghost hunt in the daylight, in part so I could take pictures of the tunnel and in part to avoid the seemingly inevitable head-on collision.

Parking your car in a dark, one-lane tunnel without benefit of headlights is generally ill-advised. It's a particularly bad idea if there's a blind curve right at the end of the tunnel, as there is on Township Road 1536.

After driving about halfway through the tunnel and putting the car in park, I decided to turn off the radio. Better to hear the ghosts, I figured. Then I put the car in neutral and waited.

For about a second, nothing happened. Exactly as I expected. I'm not much of a believer in the paranormal.

But then something weird happened. My car began to move forward without any action on my part.

It didn't exactly feel like the vehicle was being pushed by a ghost. Honestly, it felt more like rolling down a hill, despite the fact that the ground appears relatively flat.

Just as I started thinking, "well that's odd," I saw a car coming the other way. Luckily, the driver was kind enough (and apparently familiar enough with the area) to wait for me to get the car started and finish passing through the tunnel before she entered the tunnel herself.

After a brief and uneventful exploration on foot, I got back in the car and turned around to head back the other way. In an effort to be thorough, I stopped in the tunnel once more. This time my car moved backwards.

It seemed pretty consistent with my "car rolling down a slight hill" theory. That, or the ghosts really wanted me on the other side of that bridge.

Following my own investigation, I started making phone calls.

I got a laugh when I asked Milton Township trustee Frank Goschinski. It was the first he'd heard of the tunnel legend.

"I've gotten no complaints of any ghosts or anything there," he said. "Sorry I can't be of more help."

I called the Ashland County Historical Society. The staff had no knowledge of the legend and weren't able to locate any articles about the tale.

Luckily, I thought of a man I'd heard speak at Ashland Public Library several years ago -- Jason Robinson of the Ohio Exploration Society.

Members of the group, which Robinson founded in 2000, describe themselves as "urban explorers who visit both well-known historical locations and those forgotten with time." I remembered Robinson was pretty into paranormal investigation.

Robinson seemed hesitant to say there's no paranormal activity at the tunnel, but he did say he has been to the tunnel a couple times and never noticed anything out of the ordinary. He typically checks for magnetic fields and records audio so he can listen back for "electronic voice phenomena."

On his most recent trip to the tunnel, Robinson felt pretty confident he had found a logical explanation for what happens inside the tunnel.

Using a GPS feature on his ham radio that gives a fairly precise measure of elevation, Robinson discovered one side of the tunnel is, in fact, lower than the other. The elevation change could easily account for the movement of vehicles, he said.

So is the Milton Township Road 1536 tunnel haunted? Probably not, but I'd say it's still worth a trip.