Now in private practice in Mansfield, attorney Reese Mills cited a Fifth District Court of Appeals decision in a 1974 case involving the Village of Bellville after council members there approved pay increases during their current terms of office.

In siding with the village, the 5th District Court said, "The Ohio Constitution authorizes the General Assembly to control the municipal corporation in how it proceeds to 'enact' the ordinances, but it cannot control the people of the municipal corporation in their choice of the rule of conduct for the lives of human beings provided for in the ordinances thus 'enacted.'"

The appellate court in 1982, citing previous cases decided by the Ohio Supreme Court, described how municipalities can be at odds with state lawmakers.

The court said, " In sum, the issue deals with the struggle of local municipalities to be 'cleft from the clutches of Columbus' and deals with whether or not we are so close to George Orwell's '1984' that each little Ohio village needs to have its 'governmental diapers changed' and its 'political nose blown' by 'big brother' in Columbus or whether the people of those municipalities are to be afforded the presumption of sufficient political maturity that they may say with authority, 'Please Dad, I'd rather do it myself!'" 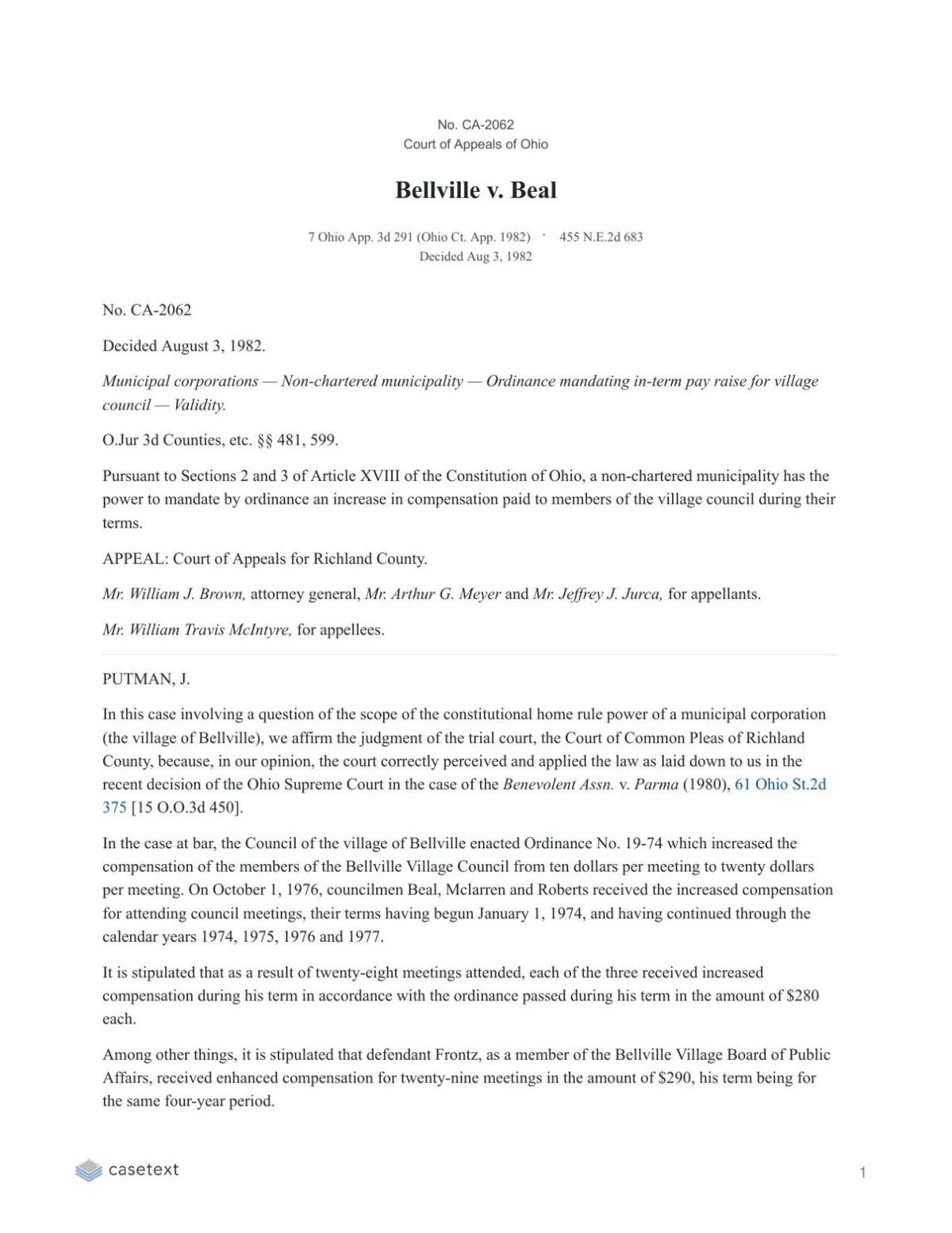 In his opinion, dated Dec. 11, Mills said Mansfield City Council had the power to immediately implement the approved pay raises for themselves, Mayor Tim Theaker, Law Director John Spon and Finance Director Linn Stewart, despite the fact the change was not approved as an emergency in December 2019.

At the time of City Council's 5-3 approval, it was announced that since the measure failed to get the six votes needed to pass as an emergency, that it would not take effect in time to improve the compensation of the newly re-elected mayor, law director, finance director or council members who began new terms in January 2020. 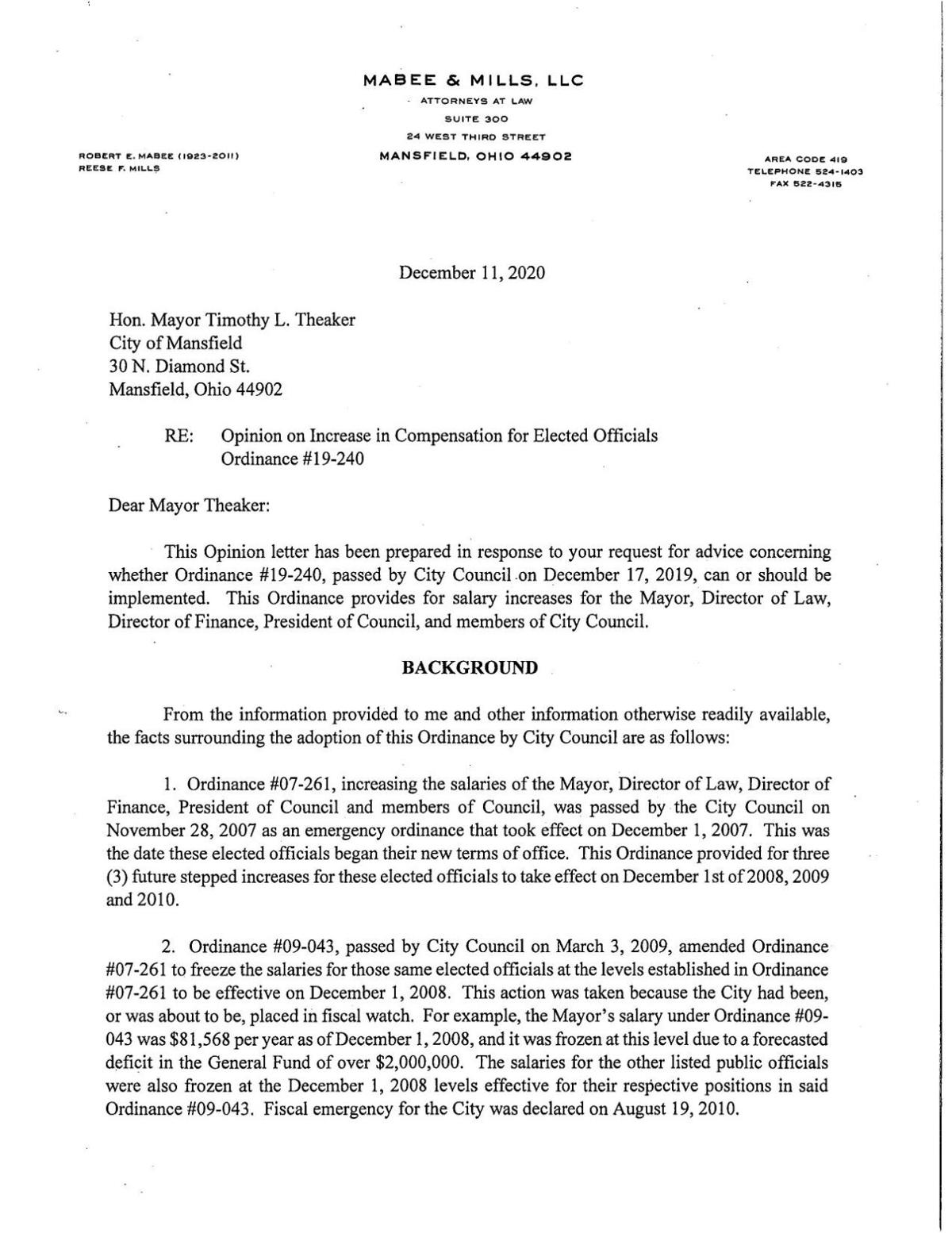 Ohio Revised Code 731.07 states, "The salary of any officer of a city shall not be increased or diminished during the term for which he was elected or appointed."

Since the ordinance was not approved as an emergency, which would have required six votes, it was planned to take effect Jan. 16, 2020, 30 days after its passage and after the new terms had begun.

In his opinion, Mills said the Ohio Constitution says municipalities "shall have the authority to exercise all powers of local self-government ... that are not in conflict with the general laws."

"As applies to the current situation, the fixing of salaries or compensation is a matter within the constitutional powers of local self-government, free from the control of the Ohio General Assembly," Mills wrote in his opinion.

-- The case involving Bellville is controlling in this instance since the decision was made by the Fifth District Court of Appeals and the City of Mansfield is located in the court's jurisdiction.

-- The pay increases were "not actually in-term pay increases, but are pre-term ... since the Ordinance was enacted on Dec. 17, 2019, which was prior to the commencement of the new terms of office beginning on Jan. 1, 2020."

-- The City of Mansfield has operated under its own Charter, which became effective on Jan. 1, 1983. Mills said, "Most notably, Article II, Section 2.02 of the Charter states, 'All powers shall be exercised in the manner prescribed in this Charter, or if not so prescribed, in the manner provided by ordinance or resolution of Council.'"

At a Jan. 5 City Council meeting, Fourth Ward Council representative Alomar Davenport raised the issue after two members of his ward sent in public letters complaining about the move.

Mills also said the implementation of the pay increases did not violate Ohio Ethics Laws.

The city administration's decision to seek an outside legal opinion regarding the status of the pay increases was not discussed during any public council meetings during 2020. It appears council members were not aware the second opinion was being sought.

"I didn't know until I got a call in December telling me I was getting the raise," At-Large Councilman Phil Scott said Tuesday. "The work to obtain an outside opinion was done by the administration. I don't think anyone on council knew."

In a public records request last week, Richland Source asked for a copy of the opinion and also emails and correspondence to and from the city and the outside counsel regarding that opinion.

Theaker said in an email to Richland Source on Tuesday that he sought the legal opinion from the Mansfield law firm of Mabee & Mills, LLC, which generated the eight-page opinion.

"This decision was not taken lightly by any of the elected officials, and in the interest of transparency and out of respect for the public, the decision was made to release the final opinion to the public," the mayor wrote.

The mayor declined to provide emails or conversations between the city and Mills.

Pay increases for Mansfield's elected leaders, scheduled to begin in 2022 and beyond after City Council approved them on a non-emergency basis in December 2019, have now been implemented, based on an "outside legal counsel opinion."