The case that lines the front of Mary Anne's Meats is filled with a diverse array of choices—steaks, roasts, ribeyes, pork chops, ground beef, chicken breasts, tenderloins and ham loaf. Meat cutters look up from their work and offer a greeting and a smile. 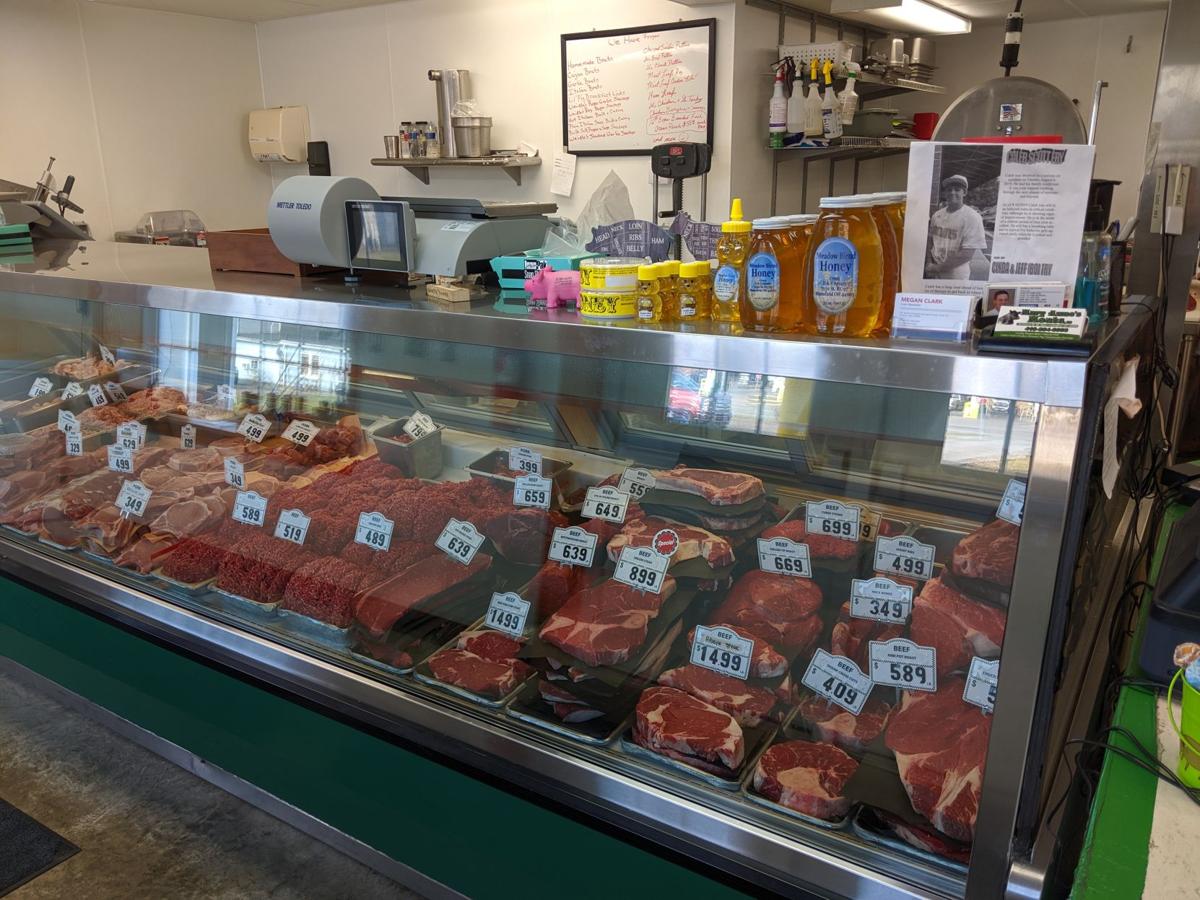 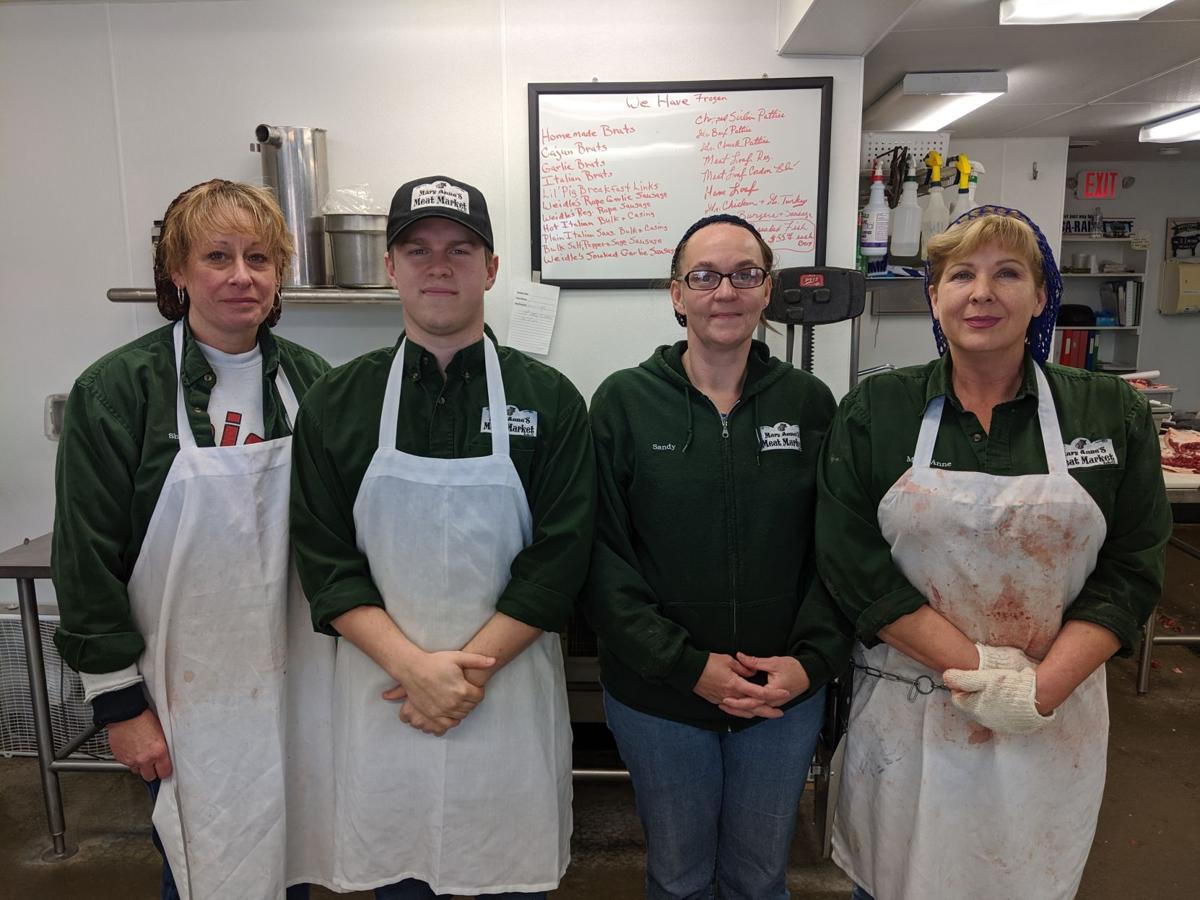 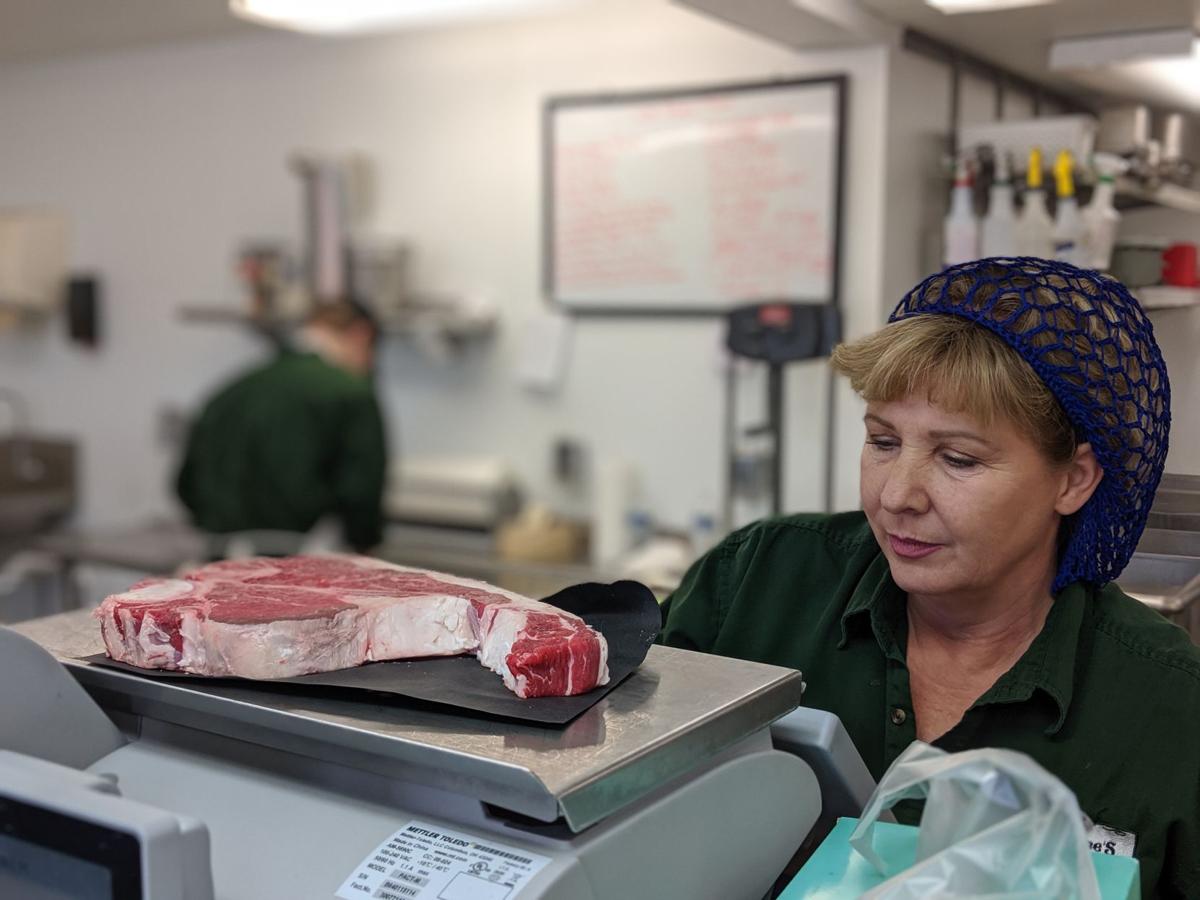 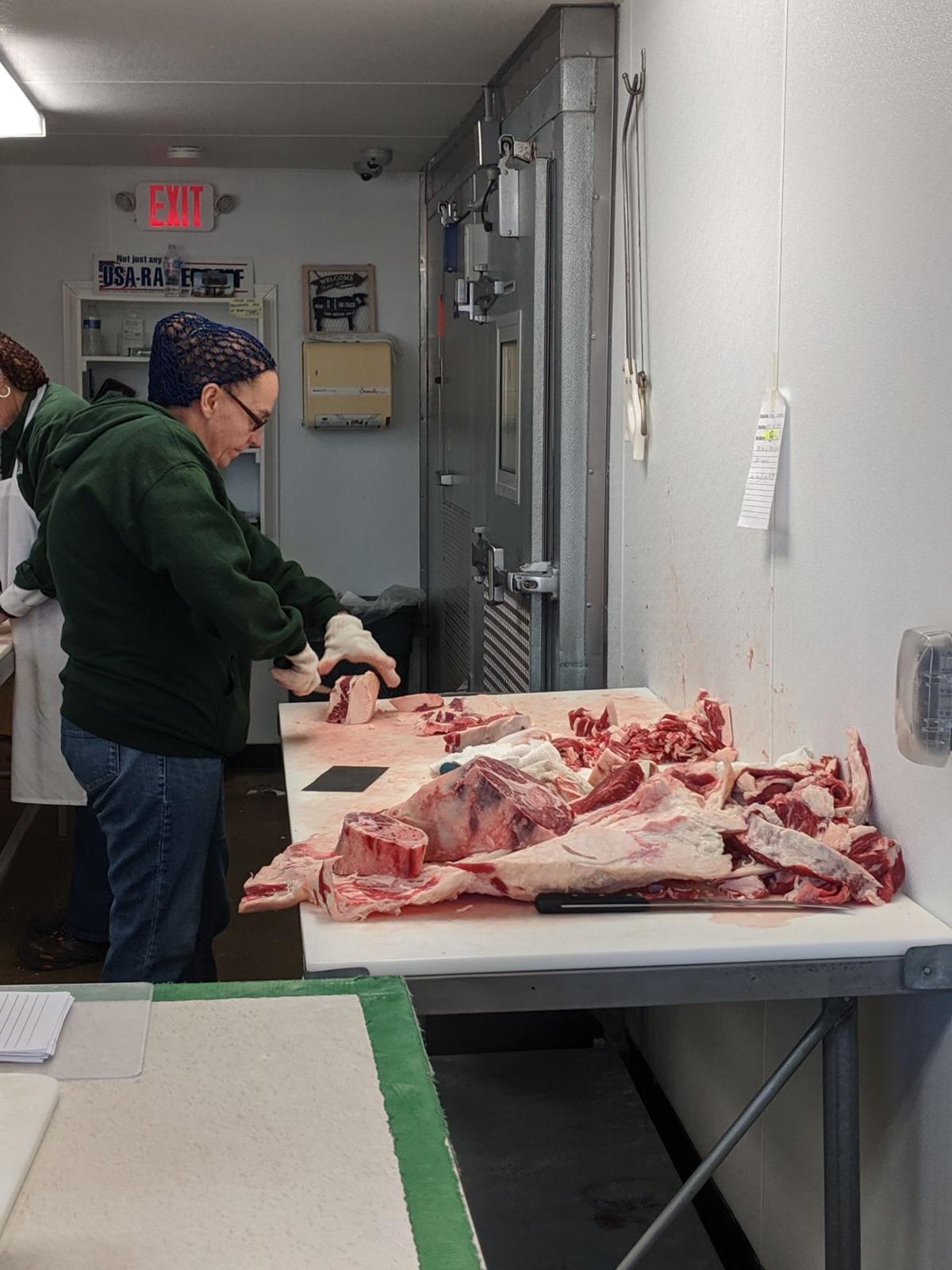 In the center of the shop stands Mary Anne Kettering, her long blonde hair swept up in a bun and tucked in a royal blue hairnet, deftly slicing cuts from a giant slab of beef. The business' founder and namesake shatters every stereotype you can think of—a former high school dropout operating a thriving company, a successful female business owner in a male-dominated field, a warm, motherly figure with a tough, tenacious core.

“She sells more meat per foot of meat case than anybody I know,” said colleague Rick Heffelfinger of Heffelfinger Meats Inc. “She’s very passionate about her livelihood and her business."

When she's not in her meat market or working on her farm, Kettering enjoys painting wintry Christmas scenes onto gift boxes and crafting classical piano pieces.

"She’s such a dichotomy," said Kym Lamb, a friend and coworker. "She’s capable of throwing a cow on her shoulder and butchering it and then, in the next breath, she could be writing a song for you."

Nevertheless, customers will tell you what makes Kettering stand out isn't her business acumen or wide range of talent. It's her characteristic blend of kindness and determination—one that's helped Mary Anne's Meats survive a number of challenges over the years.

"A lot of people would just go ahead and give up," Heffelfinger said. "That’s not her DNA.”

A few months ago, Mary Anne's Meats was nominated for the Small Business of the Year award given by the Richland Area Chamber of Commerce. The tale of Kettering's persistence inspired the committee to create a new award in her honor: the entrepreneurial spirit award.

"The committee was really moved by her story ... overcoming a car crashing into her business and all she had to go through to open her business again," said Jodie Perry, president of the chamber. "We all thought, we need to give her something special.”

“I was just amazed," Kettering said. "We’re all very grateful. Very humbled by it too. It’s nice. I never expected they would create a new award to honor us. It leaves a knot in my throat.”

Kettering's experience in the meat industry stretches all the way back to her childhood on a farm near Port Clinton, Ohio. Growing up, her family had no need for trips to the grocery store—they grew and canned their own fruits and vegetables from a garden that spanned more than an acre and raised their own cattle, hogs, geese and chickens.

“I never found anything repulsive about butchering animals. I don’t think we were allowed to,” Kettering said.

Instead, she became mesmerized by the ins-and-outs of the meat industry at an early age and still remembers the savory aroma of seasonings and spices from the local smokehouse. Her childhood fascination blossomed into a dream: that she would own a meat market one day.

Decades later, the dream has been realized and the magic has yet to fade.

Kettering now has a farm of her own, where she and her husband Charles Kettering raise a 300-head herd of black angus and angus-limousin crossbred cattle. With a quick glance, she can evaluate whether a cow is ready to be butchered, the quality of meat it will produce and about how many cuts she can get.

“You want a nice bright red, you want the marbling to be a bright white and evenly distributed throughout the meat,” she explained. “I’ve been doing it so many years, I can usually guess the weight of a steer within 5 to 10 pounds.”

Realizing her childhood dream has been rewarding, but the journey was anything but easy.

“With everything we’ve been through, I’m amazed we’ve made it,” she said. “But I trust God. I do until he tells me to quit, I’m not quitting.”

When Kettering was 17, she became pregnant and dropped out of high school. At the time, she was enrolled at the meat processing program at Pioneer Career and Technology Center, where her adviser Don Heffelfinger promised there would be an open spot for her if she ever choose to come back and finish the program.

After graduating from Pioneer, she worked as a meat cutter and saleswoman, traveling the state and acquiring all the knowledge she could about the industry along the way. Once her two children were grown, she opened a deer processing plant in the same building that now houses Mary Anne’s Meats.

The 100-year-old barn had good bones, but not much in the way of amenities. At the time, the building had no heat and no restroom, so she’d walk across the street to the gas station and frequently resorted to a blowtorch to unfreeze the aging water lines.

Kettering didn’t have the funds to hire help or upgrade the building, so she spent her first deer season alone. When business was busy, she’d work long past midnight and fall asleep on the cutting room floor, curled up next to a kerosene heater.

“You do what you have to do to get what you want,” Kettering said. “I processed thousands of deer in order to make enough money to redo the building, to meet all the standards and regulations for state meat inspection. I did not go to the bank. I worked for everything.”

Nearly three and a half years later, Kettering finally had the money she needed to transform her business into a full-blown meat market. Mary Anne’s Meats opened in March 2007, but troubles came again the next year. A series of health complications landed Kettering in a wheelchair for six months. Lacking the strength to work for the first time in her life was devastating. Discouragement turned to depression, so much that at one point, she considered suicide.

Once she was able to use crutches, Kettering’s husband began taking her into the woods each day and instructing her to search for arrowheads.

“He said, ‘You’ve got to get out. You’ve got to quit feeling sorry for yourself. You’re not going to feel better until you get out and move around,’” she said. “It’s exactly what I needed.”

Kettering’s employees kept the business going in her absence, but over the next couple years, two storms caused nearly $120,000 in damages to the building. In June 2017, an elderly woman crashed her car through the west wall. No one was hurt, but the damage was extensive. The entire building buckled. The car struck the solid oak sales counter and sent it crashing toward the rest of the equipment. Mary Anne’s was closed for one day shy of fourteen months as contractors rebuilt the north wall, repaired the attic floor, replaced two weight bearing beams, installed a new freezer and restored the dented up cooler.

When issues arose with her insurance claim, Kettering mortgaged almost all of her property and got a loan from Farmers State Bank. It’s the first time she’s taken a business loan.

“I have no credit score and I drive a 25 year old pickup truck,” she said. “I’m very conservative.”

Her insurance company has yet to reimburse her.

“I think they thought I would quit,” she said. “They’re messing with the wrong person. I’m not a quitter.”

More than a meat market

Waiting to reopen was a long and painful process, but quitting was never an option. Kettering missed her customers too much.

“Those 14 months I was closed, all I could think about was my customers. I missed my customers so bad,” she said. “When I wasn’t able to see my customers, I worried about them.”

Kettering sees her shop as more than a business. It’s a calling.

“My meat market’s like my ministry,” she said. “We may not have much money, but we’ve always had plenty for people to eat. We decided when we opened it that if there was a need and we could meet it, we would.”

“I get to know my customers. I talk to them... I know what’s going on in their life, how many grandbabies they have,” she said. “But then I also hear, ‘My husband has cancer,’ ‘My wife has cancer,’ or ‘We just lost my son’ or ‘I just lost my job’ and if I could give meat to help I did.”

In addition to giving, Kettering gets to know her customers well and often offers a listening ear.

During the 14 months Mary Anne’s was closed, her customers returned the favor. Kettering says that whenever she started to feel discouraged, they came through for her with encouraging cards and phone calls.

Nevertheless, Lamb says she didn’t fully understand Kettering’s impact on others until the day Mary Anne’s reopened following the crash.

“Over a thousand people hit that door. After 14 months, we weren’t sure what was going to happen,” she recalled. “Some of them would pop their heads in and say ‘We’re going to come back next week when it’s not so busy, but we just want you to know we’re coming back.’”

Despite the hardships she's had to face to keep her business up and running, Kettering believes she has plenty to be thankful for.

“I believe God takes us through trials in our life to make us stronger so we’re able to withstand whatever else is coming, but especially to help other people,” she reflected. "You have to count your blessings everyday. .. For anybody out there going through anything, count your blessings. You can always find something to be grateful about. You can always find something to be happy about, especially if it’s for somebody else. And don’t let anybody steal your joy.”

“When bad things happen you have to deal with it," she added. "You have to focus on good things, if you don’t there will not be any joy in your life.”