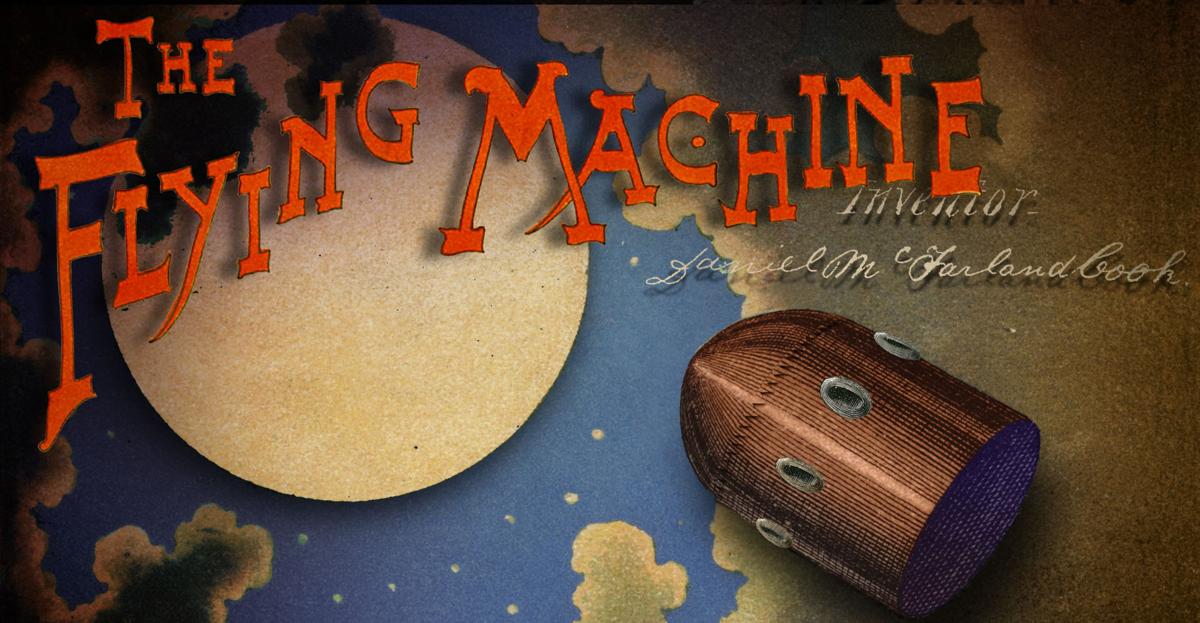 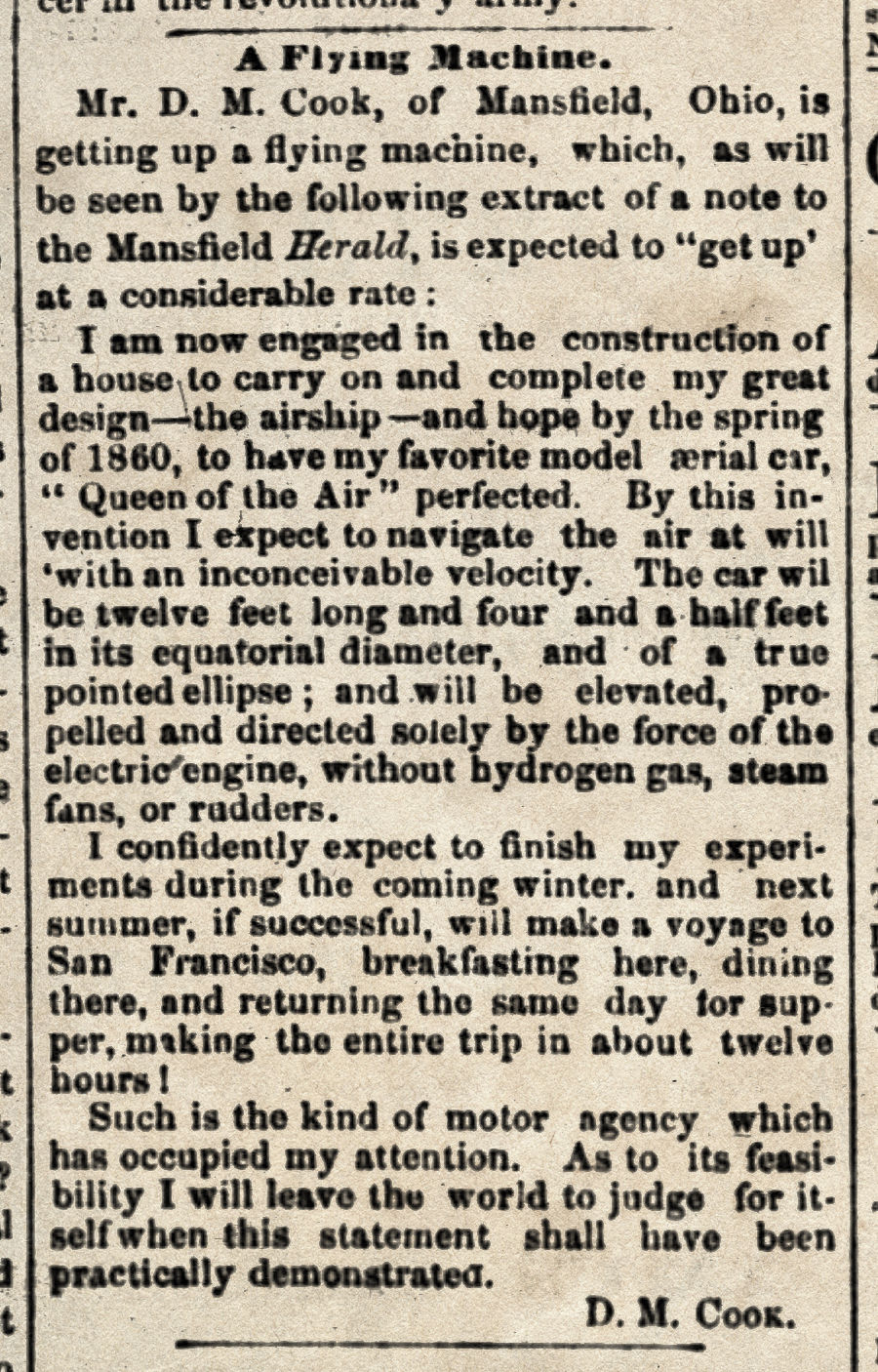 A typical US clipping from August 1859, as abstracted from the Mansfield Herald; this one from Oakland, CA. Many dozens more from New York to New Orleans to New Mexico. 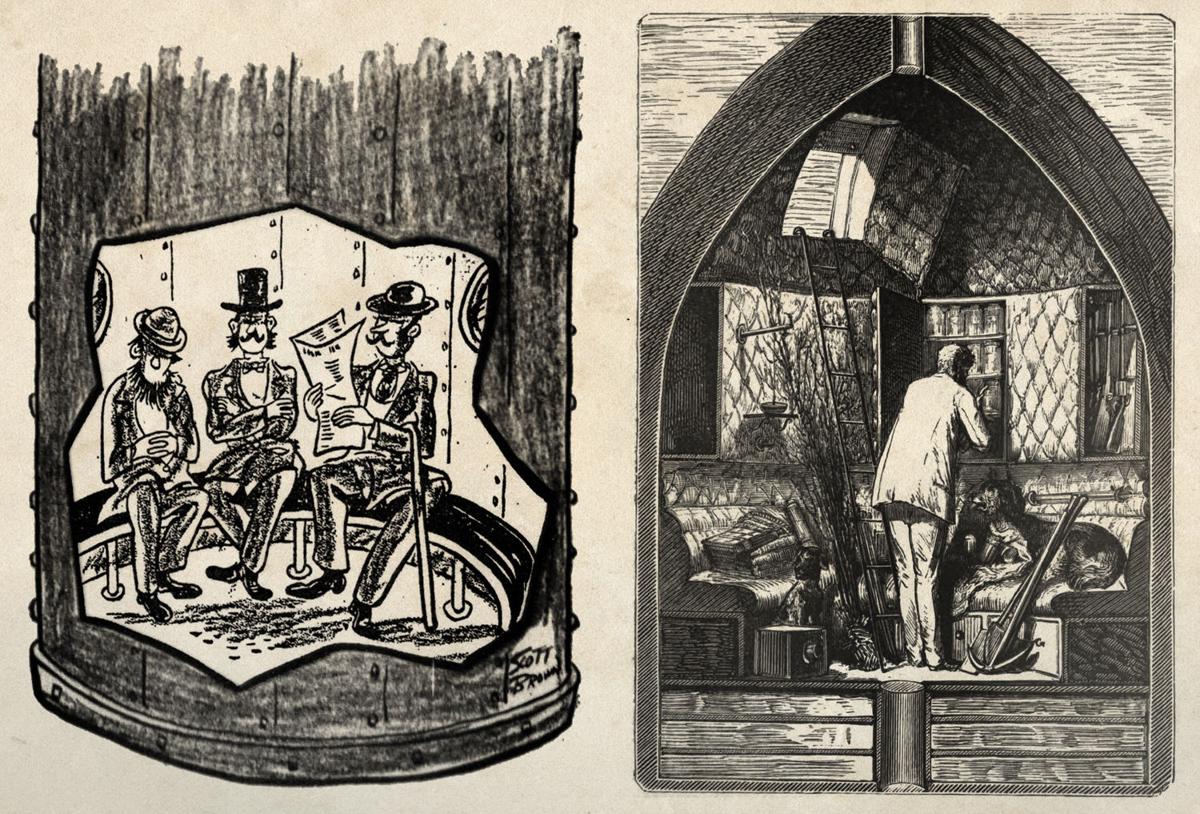 These two illustrators imagined what aeronautical travel might have been like in the Nineteenth century: (left) Mansfield artist Scott Brown picturing Cook's Flying Machine in a 1969 News Journal article by Virgil Stanfield; (right) Henry de Montaut illustration from 1868 US edition of From the Earth to the Moon by Jules Verne. 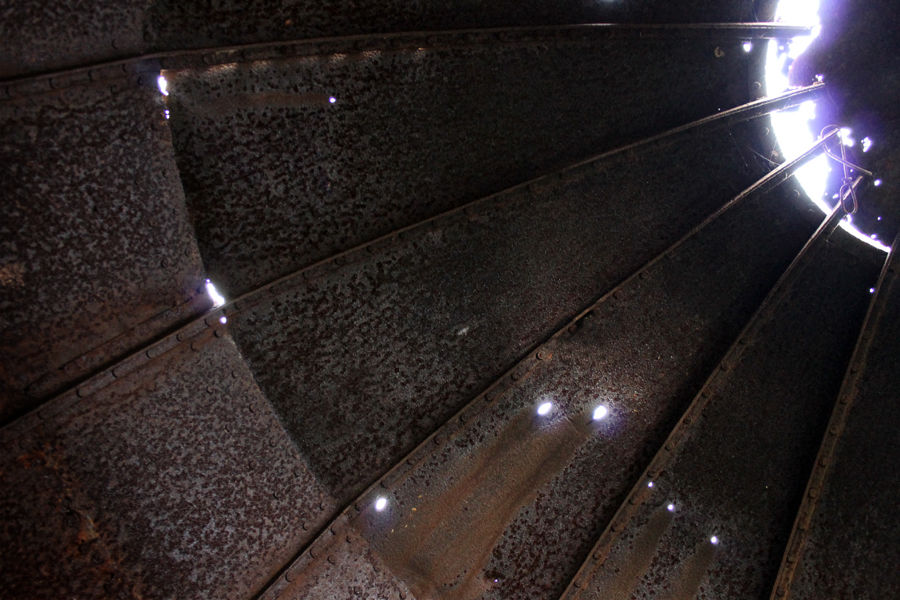 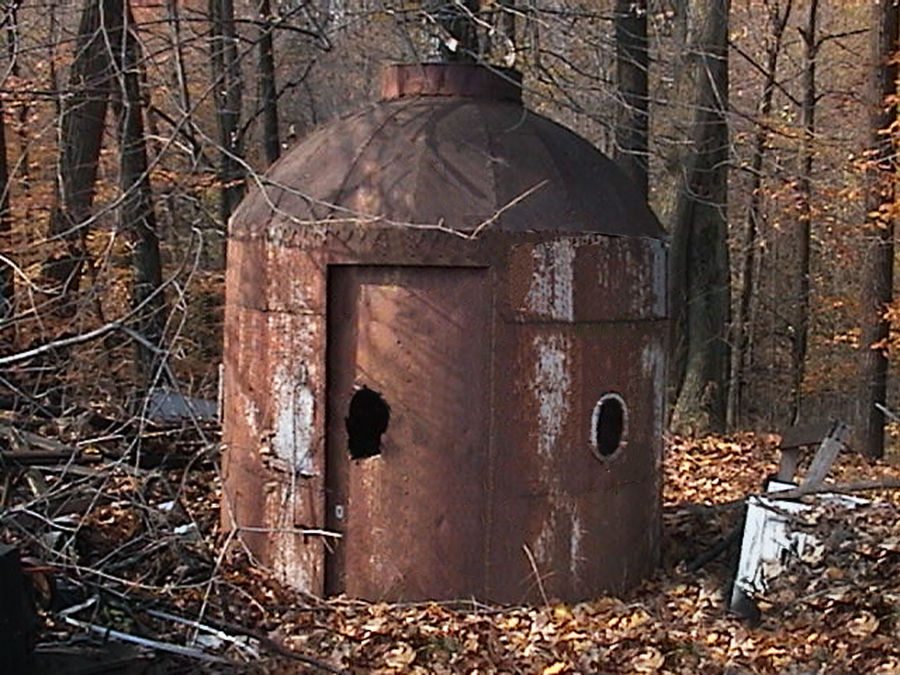 In 2003 the Flying Machine had concluded its  career as a smokehouse, and was retired to the woods near Mansfield-Washington Road. 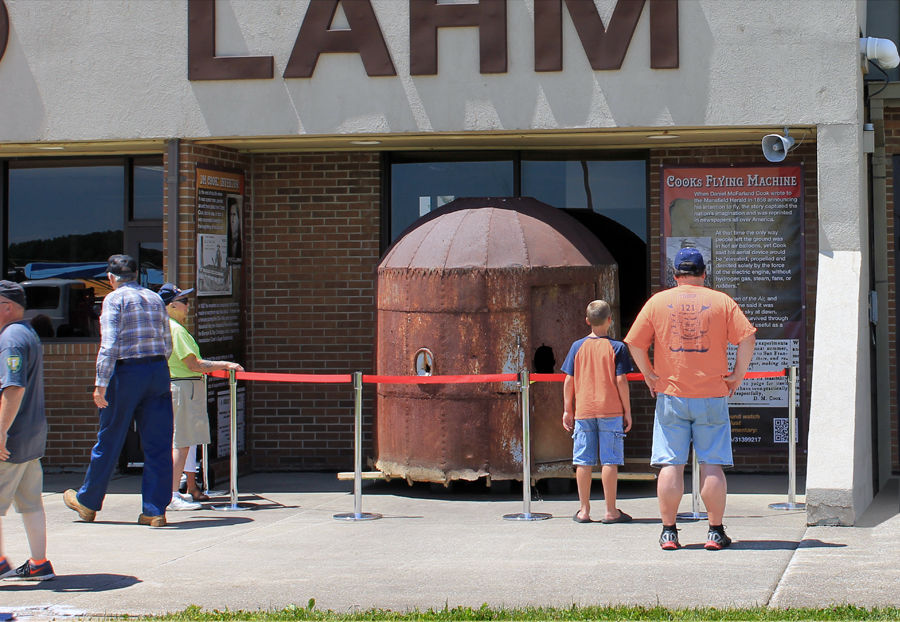 The Flying Machine did a gig at Mansfield Lahm Airport on Airport Day 2014, posing for photos with tourists. 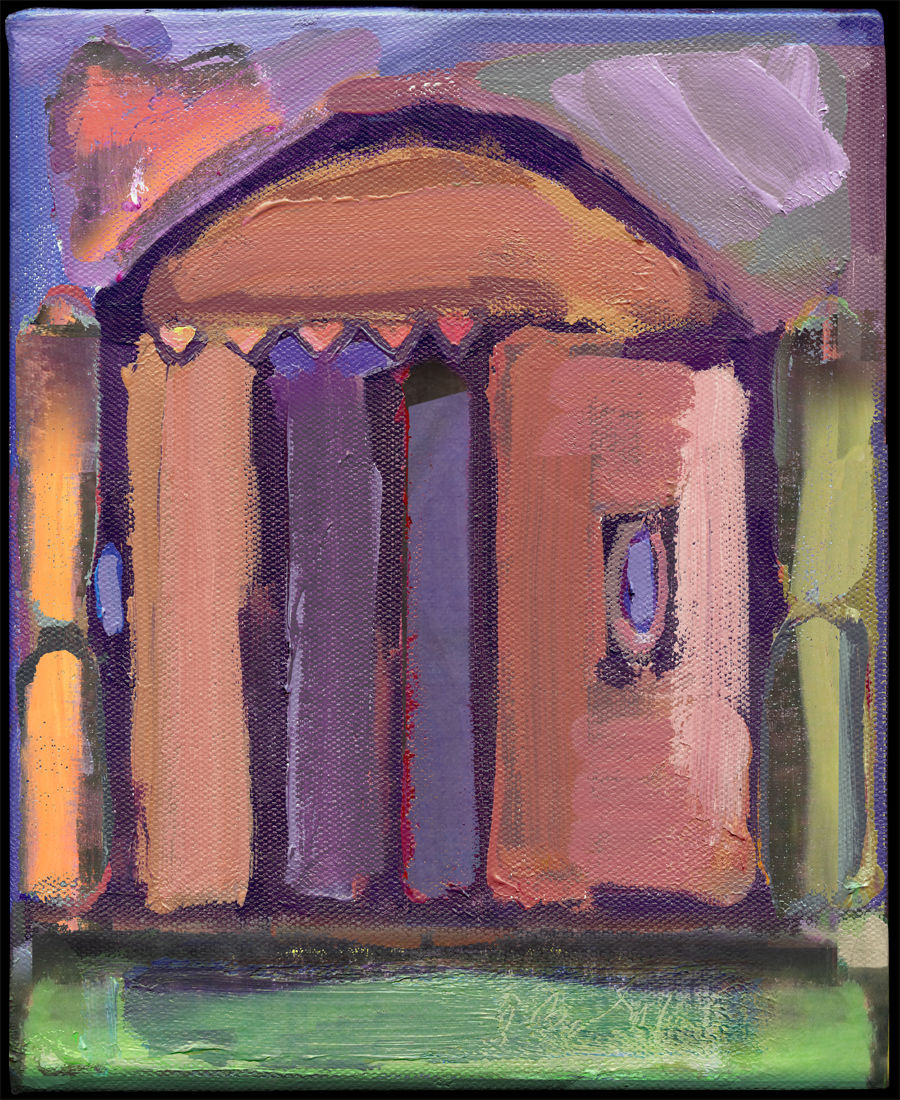 Portrait of the Flying Machine by TB McKee, 2013. 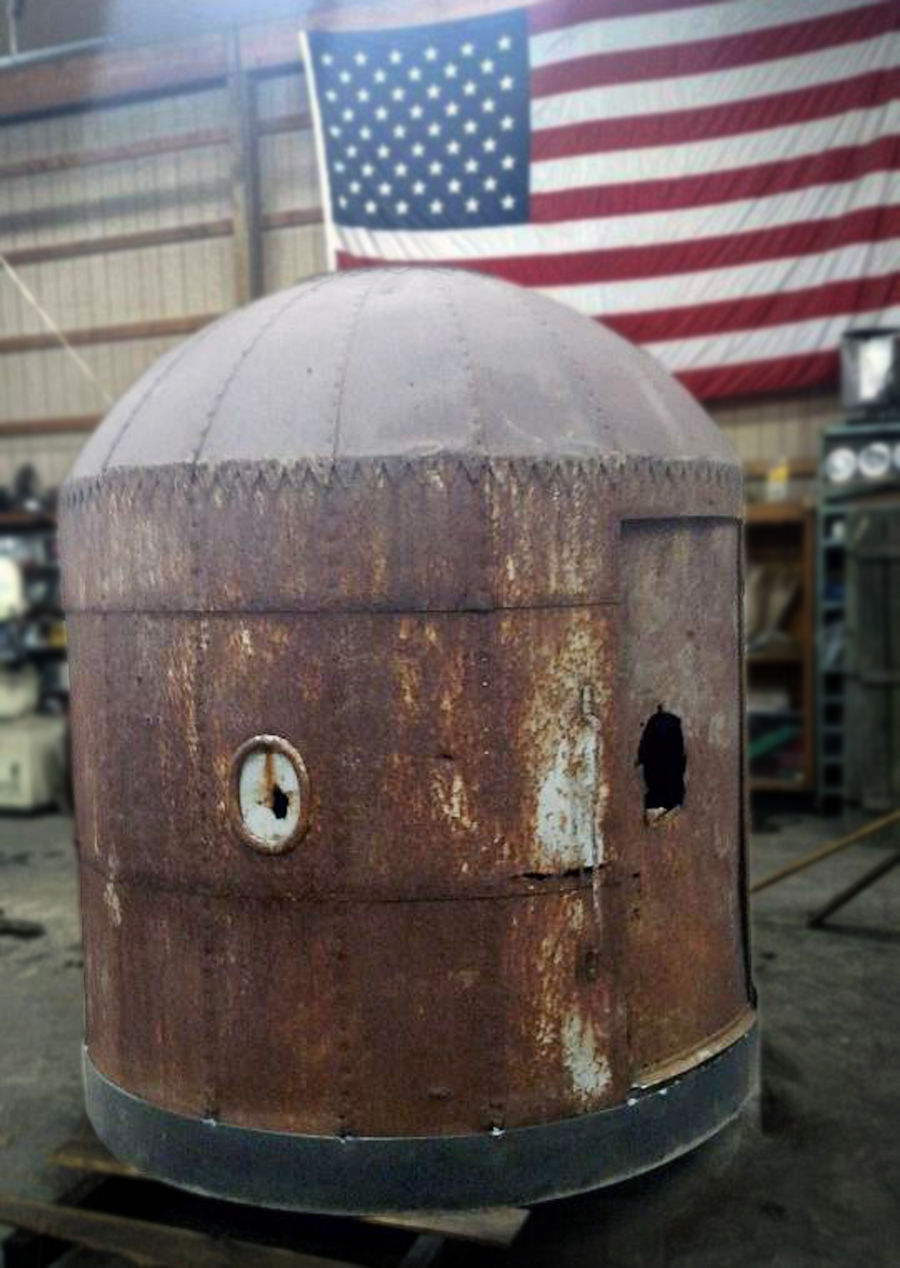 In 2017 the Flying Machine underwent minimal restoration for stabilization, with its lost base reconstituted, and a clear coating to retard the effects of rusting.

I was just exactly the right age the first time I read about the Flying Machine: young enough to dream; old enough to go searching for it. The article said it was located near Woodville School, and I was 10, so I got on my bike and pedaled over there to find it.

Later I learned that you don’t have to be a youngster in order to dream, because Daniel McFarland Cook was 39 when he invented the Flying Machine; and only a man with a prodigious capacity for dreaming could have conceived such a thing in 1859. He was dreaming in full throttle until the end of his life; so much so, that folks around here called him Crazy Cook.

He boldly proclaimed his dream to the world before it was even ready to launch; and the audacity of his assertion positively ignited the imagination of the American public, because the Mansfield Herald clipping was reprinted in hundreds of newspapers across the country from New England to California. They all quoted his exact words, “I will make a voyage to San Francisco: breakfasting here, dining there, and returning the same day for supper!”

Naturally, there were a few of these papers who made fun of him; but clearly most of them seemed to be holding their breath, to see if his dream would come true. At the onset of the Civil War, a Cleveland paper went so far as to assure the public that Cook’s Flying Machine was to be, “offered to the Government as a valuable aid in the present national crisis.”

I probably don’t need to tell you that Cook’s Flying Machine never got off the ground. But the fearlessness invoked in its creation seemed to invest the airship with an aura that kept it intact for generations after the old inventor left the Earth.

Cook painted his ‘Aerial Car’ a rose color “like the sky at dawn;” and he named her Queen of the Air. It stood as a landmark in the field near his house several years after he was moved away; and when the farm sold, the Flying Machine was carted a few miles up Cook Road where it could be used as a corn crib. In another decade, it was a chicken coop. Then it stood empty for a half century.

The first time I saw the Flying Machine, it was coated with a metallic silver paint, with only a few spots of rust showing around the joints and rivets. The metal floor and porthole covers were sealed tight, and there was an oak bench that curved all the way around its interior circumference.

I used to go in and shut the door; and there was something about sitting in the dark under the dome that was like being in a planetarium. It had tiny holes rusted through the metal that lit up in bright pinpoints of light, just like stars hung in the firmament. It was a true engine for generating fantasies.

I always imagined starting up the motor and listening to it roar while the walls shimmied and hummed, as we catapulted through dimensions of America. And I always hoped that when I opened the door, I would step out into a different century. It was less of an aerial conveyance to me than it was a Time Machine.

There was an interval of some years in this story when I went off to grow up; and when I came back to Mansfield in the 1990s I went looking for the Flying Machine. Sadly, it had vanished; and the city seemed a colder place without that icon of childhood exuberance and whimsy.

I asked around, but no one had any idea what I was talking about, until someone recalled seeing a bullet-shaped metal smokehouse with portholes on a hillside above Mansfield-Washington Road. So I drove out there to glimpse it from the pavement, and my heart lifted just to know the old girl had made it through another couple decades.

It was a few years later, as the Mansfield Bicentennial celebration was nearing, when it occurred to me that the time and occasion had come to make an official effort at preserving the Flying Machine for future generations. Unfortunately, when I went to find it, the landmark relic was gone again.

Not to be deterred, I parked my car at its last known site and started knocking on doors. “Have you seen this thing—about 10 feet tall, shaped like a bullet, little round portholes?” People gave me that same look that Mr. Cook must have seen a thousand times.

Finally, a young man was shaking his head no until I said ‘porthole,’ and then he started. “Do you mean the submarine?” He led me back into the woods and pointed at the Flying Machine. He told me that when they were kids, they pretended it took them under the sea.

The toll of time

At that point, it had been more than 40 years since I had been inside the Flying Machine, and I could see that without its protective shell of silver paint, it was disintegrating rapidly; and if something wasn’t done soon, there wouldn’t be anything to preserve.

Convincing the owner to let me take the rusty old smokehouse wasn’t too difficult, but finding a place to put it was a serious challenge. A couple museums in the county seemed interested, but the big old thing couldn’t get indoors without removing a wall.

I wrote to the Smithsonian to see if they wanted it, and they politely declined; I asked the National Museum of the United States Air Force in Dayton if they could make a place for it in their acres of flying machines; but they didn’t bother even writing back. I reached their curator on the phone one day, and he spoke to me in a way that I’m sure Crazy Cook would have recognized.

Both of these national institutions utterly missed the point. Perhaps to them it could have been more historically significant if Cook had gotten his aircraft into the air as he planned; but the fact that he remained earthbound does not lessen the poignancy of his visionary passion to soar into the sky.

What he achieved was something else entirely: something more spiritual. He inspired a nation to believe, if only for a moment; or at least, to suspend their disbelief. A moment of inspiration can drive the world to a whole new level of what is possible.

Fortunately for us, the museum with vision enough to preserve our odd piece of legendary dreaming, is located in our own city. The Flying Machine has landed finally at the North Central Ohio Industrial Museum.

Delivering the Flying Machine from the jaws of Time has required the vision and generosity of many people in our community, including: Virgil Stanfield, Henry Cunning, John & Lowell Finley, Ken Arthur, Carl Fernyak, Bill Schmidt, Terry Byrne, Ken Earhart, and Jerry Miller.  Thank you!