(This is a special joint piece about the history of Serpent Mound from Ben Barnes, Chief of the Shawnee Tribe and Dr. Brad Lepper, Archaeology Curator at Ohio History Connection.)

In April of this year, former U.S. Senator Rick Santorum told the Young America's Foundation that before Europeans arrived in America there was “nothing here.” 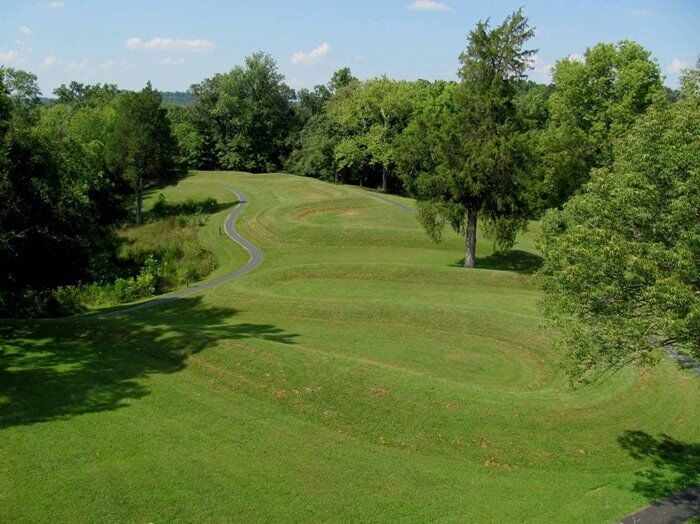 This is an aerial view of the Serpent Mound located in Adams County, Ohio. 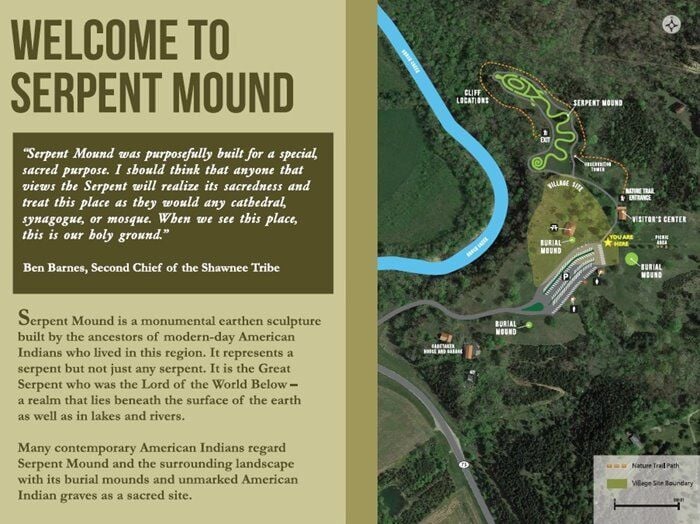 This sign welcomes visitors to the historic site. It was produced in partnership with the Shawnee Tribe and features a quote from Chief Ben Barnes. 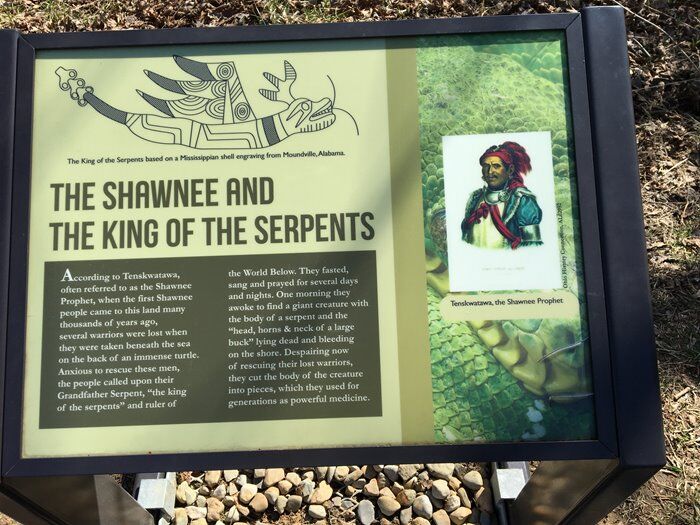 This interpretive sign at Serpent Mound shares the story of the Shawnee and the King of the Serpents. 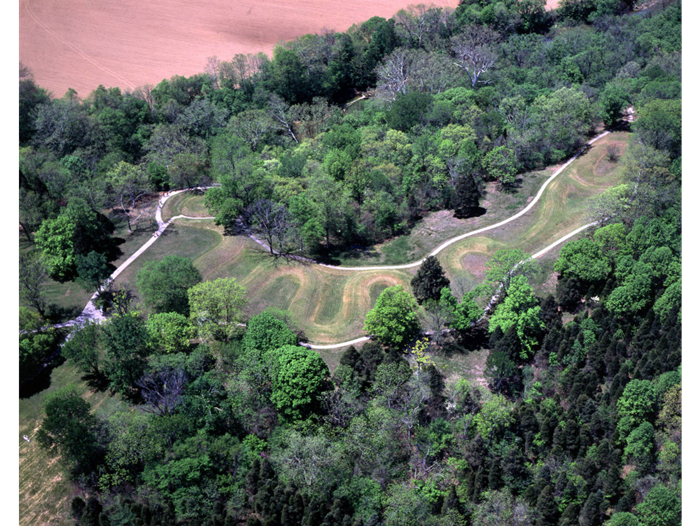 This is an aerial image taken between 1960-1980 that shows the full Serpent Mound site in Adams County, Ohio.

This is an aerial view of the Serpent Mound located in Adams County, Ohio.

This sign welcomes visitors to the historic site. It was produced in partnership with the Shawnee Tribe and features a quote from Chief Ben Barnes.

This interpretive sign at Serpent Mound shares the story of the Shawnee and the King of the Serpents.

This is an aerial image taken between 1960-1980 that shows the full Serpent Mound site in Adams County, Ohio.

This astonishing claim echoes the response given by former Canadian Prime Minister Pierre Trudeau to First Nations’ leaders who said that the land belonged to Native people. Trudeau replied, “I don’t see it written anywhere that the land is yours.” Upon hearing this claim, Deborah Sparrow, a member of the Musqueam First Nation in Canada, thought to herself, “It is written in the earth. The evidence is everywhere that we have lived in the land. Anywhere that we open the earth, so are unveiled the messages from the past.”

Messages from Ohio’s indigenous past are, indeed, everywhere. In some places, however, they are not veiled by the earth, but are built from it. Serpent Mound, located in Adams County, Ohio, is the most widely recognized effigy mound in the world. There is, however, considerable disagreement over the stories it has to tell.

Archaeologists agree that the ancestors of American Indians built the mound, but disagree about which particular ancestors. We think the available evidence supports a Late Precontact period age of around AD 1100, whereas some other archaeologists think it was built at around 300 BC during the Early Woodland period.

Some think the mound represents a serpent with an egg in its jaws. Others think the so-called “egg” is the serpent’s eye or it’s open mouth.

When viewed in the context of Late Precontact period rock art and American Indian oral traditions, Lepper and several colleagues think the entire earthwork represents an episode from a creation story involving the Great Serpent and First Woman that was told among the Dhegiha Siouan tribes.

This doesn’t necessarily mean the ancestors of these groups built the serpent.

The same creation story, or variations on the same theme, originally may have been widely shared among many tribes in eastern North America. The Shawnee, for example, have a tradition of a female creator with many of the characteristics of First Woman; and still have amongst their traditional, religious community a Snake Clan, which speaks powerfully to the importance and durability of the serpent in at least one modern-era Shawnee traditional community.

Serpent Mound may have a cosmic connection like many of the Hopewell earthworks, such as the Octagon Earthworks at Newark.

The head and oval are aligned to the setting sun on the Summer Solstice. Two Late Precontact stone serpent effigies in the valley below the Fort Ancient Earthworks also have alignments to the sun, which supports a Late Precontact age for the sun-aligned Serpent Mound.

The problem with this idea is that the sight lines are very short, which means there is a lot of wiggle room in the proposed alignment. The extent of this wiggle room is indicated by the fact that other investigators think the same three curves are aligned to some of the key risings of the Moon in its 18.6-year-long cycle.

They can’t both be right.

Even though archaeologists disagree about a lot of things regarding the Great Serpent Mound, there’s a lot we do agree on.

It wasn’t built by ancient astronauts or giants or the Lost Tribes of Israel. It was built by the ancestors of the American Indian tribes with historic ties to the Ohio Valley and it’s a magnificent example of ancient American Indian monumental art, which has inspired modern artists, such as Ohio’s Maya Lin, who created a huge serpentine earthwork, which she named “Eleven Minute Line.”

For the 2021 Summer Solstice (June 20), the Shawnee are returning to their homeland to reconnect with one of the places sacred to their ancestors. And this place is not “nothing.”

Serpent Mound is a National Historic Landmark. It’s also on the United States Department of the Interior’s Tentative List of sites to be considered for nomination to the UNESCO World Heritage List.

When you visit Serpent Mound, regardless of when you come or what you might think about when the ancestors of American Indians built it, what the oval earthwork at the head of the mound represents, or whether it was built to align to the setting sun on the Summer Solstice, recognize that American Indians consider it to be a sacred site. We ask you to treat this remarkable place as you would any cathedral, synagogue, or mosque.

If you’re interested in learning more about Serpent Mound, you can check out the following links below.

And if you’d like to support the ongoing preservation of this American Indian site, visit the website here.

The Mississippian Iconography of Serpent Mound