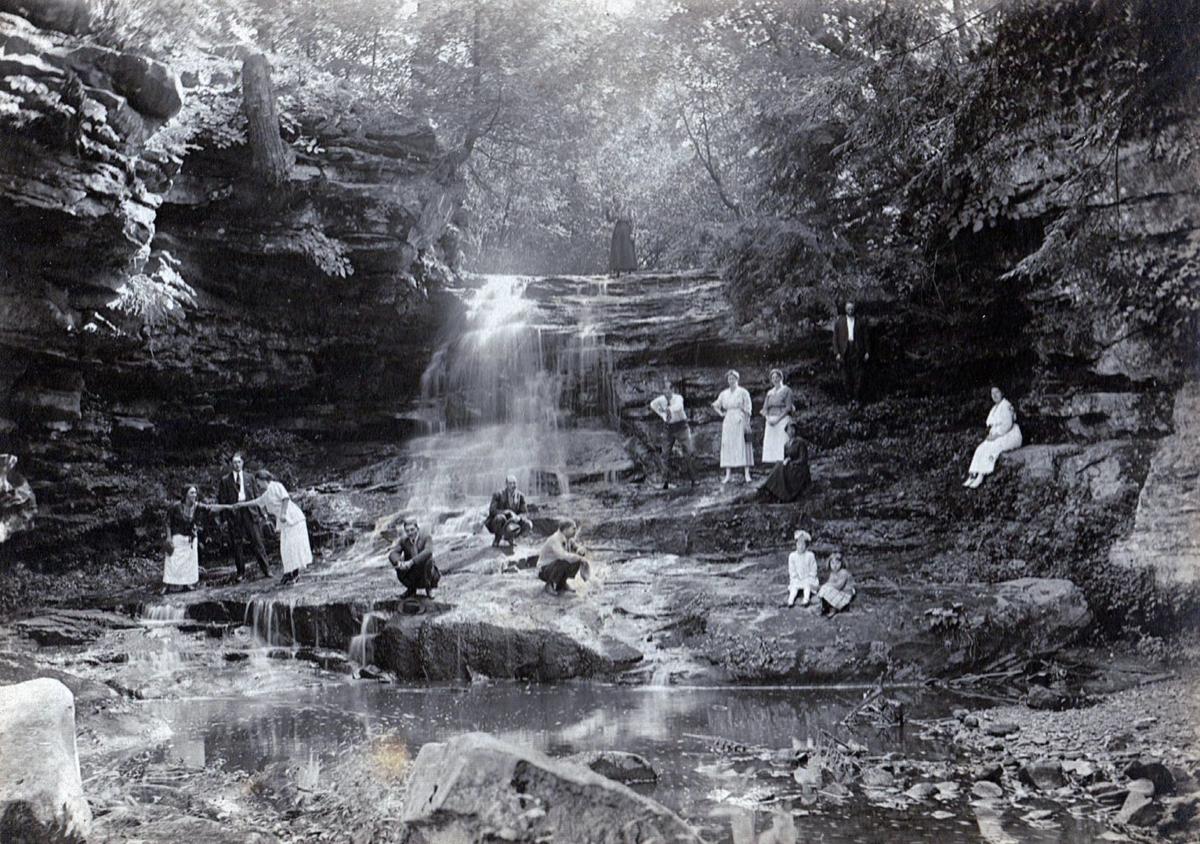 This vintage image shows Honey Run Falls being visited by a group of adventurers in the early 1900s. The area where the creek enters the Kokosing River has been a popular swimming and excursion spot for years, but the waters remain treacherous. 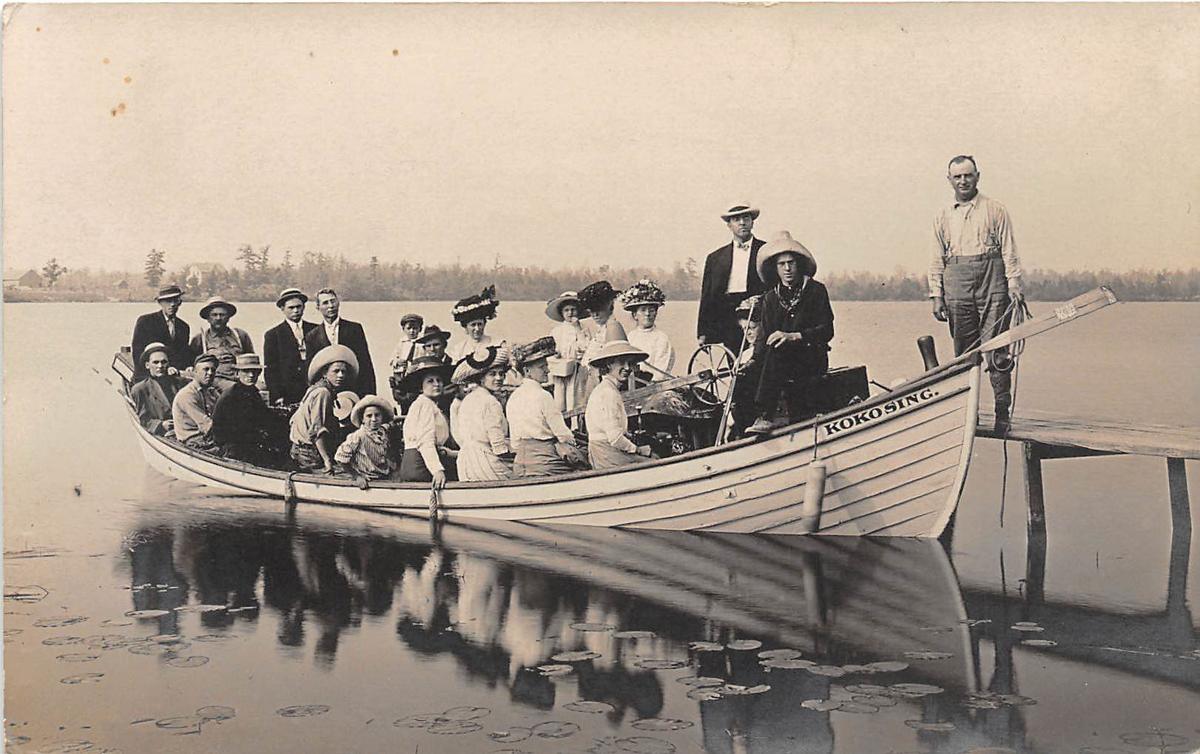 A typical excursion group from around 1900. Outdoor adventurers dressed much more formally in those days than we do today, very likely making an escape from dangerous waters even more difficult. 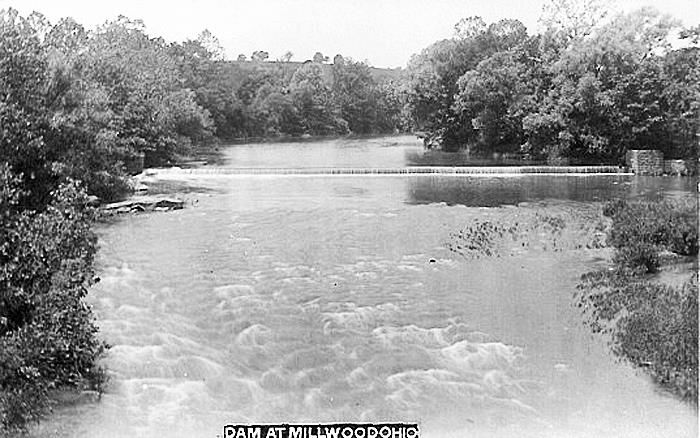 The waters of the Kokosing get dangerous as the river enters the rocky hills of eastern Knox County, passing near Millwood, where this dam used to sit. Edward Llewellyn almost drowned here in 1916.

MOUNT VERNON -- The Kokosing River is never to be underestimated. The heartbreaking searches this week for a missing swimmer near Millwood serve as a reminder of the deceptive depths and currents of the river as it moves into the hilly terrain of eastern Knox County.

An examination of news archives proves that the incident is far from the first tragedy to unfold in waters that once prompted the late Knox County Sheriff David Barber to comment, "the river looks calm on the surface, but strong currents underneath pull debris into the many boulder-size rocks that cover the riverbed."

Though the falls and nearby caves were doubtlessly visited and explored as early as human beings populated the area, organized excursions became popular in the early 20th century.

Newspaper coverage also became more widespread during those years, reporting on numerous drowning incidents. While there were periodic events over the years all along the Kokosing, a definite cluster of accidents is traceable to the stretch where the terrain first becomes rugged, from Howard, downstream past Millwood, to where the Honey Run cascades over waterfalls and enters the Kokosing.

The earliest report I was able to dig up is a non-recreational incident with a non-human victim, reported in The Democratic Banner of Mount Vernon. On Sunday, July 31, 1910, Andrew Miller was driving his buggy east of Millwood when he decided that his buggy wheels needed the mud washed off them, and he drove it into what he thought was a shallow part of the river to clean it.

Miller noticed that the current looked swift in the middle of the river, so he specifically tried to avoid going out far. Nonetheless, his horse lost its footing, fell, panicked, and ended up being swept downstream where it drowned.

Less than six years later, death was narrowly averted on Friday evening, July 14, 1916, when Millwood resident Edward Llewellyn was swimming below the Millwood dam with friends Burrell Thompson and Morley Busenburg. Llewellyn, known as a strong swimmer, suddenly started having difficulties in the water, going under three times but only resurfacing twice.

Thompson and Busenburg began a frantic search that they later said took a full 10 minutes before they were able to locate Llewellyn and tow him to shore.

On the riverbank, the friends performed first aid on Llewellyn for several minutes, refusing to give up hope that they could save him, until he sputtered back to life and consciousness. By this point, a doctor had been fetched by other friends, and he loaded the accident victim into his automobile and took him to the doctor's residence in Howard.

By Saturday afternoon, Llewellyn was again walking the streets of Millwood and telling people of his misadventure. When interviewed by The Democratic Banner, Llewellyn said that he could not account for the fact that his "strength gave out."

More likely, a dangerous rip current in a swift channel of the river was more than he or any strong swimmer could overcome.

Just three weeks later, the area had its worst swimming disaster to date, according to a press report run in the Wilmington Daily News. A family picnic excursion resulted in the tragic death of four family members, witnessed by the daughters of two of the victims.

Mr. and Mrs. Lester Mowery of Danville and their daughters had been joined by other family members, including the girls' aunt, Mrs. Don Graven of Akron, and her father, Isaac Parsons of Glenmont. Mrs. Mowery and Mrs. Graven decided to wade into a shallow part of the river. Unfortunately, they did not realize that they were walking up to an abrupt drop-off into an 18-feet-deep hole.

As the women fell into the deep area, they began flailing in the water. Lester Mowery and Isaac Parsons immediately plunged into the river to help. Unable to rescue the women, they were pulled underwater, too, as the Mowerys' daughters watched helplessly from the shore. Rescuers labored for two hours to find the bodies.

On May 6, 1938, a class outing from the Mount Vernon Academy ended in tragedy, according to a report in the Coshocton Tribune, when 15-year-old Youngstown boy Franklin Caulkins drowned two miles east of Millwood at Camp Kokosing, near the caves. It took three hours to locate the body, which was snagged with a grappling hook by Louis Kirk in 15 feet of water.

The last weekend of August, 1940, Elwyn H. Rector, of Columbus, drowned near Howard while fishing, according to another report in the Coshocton Tribune.

The early summer of 1951 was swelteringly hot, and a group of friends from Fredericktown went to Millwood to swim late on the evening of June 4. Lewis Z. Frazier, 21, drowned, according to the Mansfield News Journal.

An article in the Chillicothe Gazette stated that 13-year old Robert E. Miller, of Johnstown drowned near Millwood on a family outing in mid-July of 1965.

Chad Boudinot, a 15-year-old from Marengo, drowned Aug. 29, 1989 near Howard while his family was canoeing. According to a report in the Coshocton Tribune, the family had stopped to take a break. Chad waded into the river, fell into a deep spot, and never resurfaced. His body was pulled from the river later that day.

On July 11 of 2000, Adam Inlow, of Newark, was swimming with friends near Millwood when he went under. According to a report in the Mansfield News Journal, Inlow's body was swept under and wedged beneath a rock 10 feet below the surface. Inlow was the father of two children with a third on the way when he died. He was engaged to be married that fall.

When Inlow's friends first noticed him missing, they thought he had hidden from them as a joke. The search gradually became frantic and was compounded by not being able to reach help via cell phone due to the weak signal in the hills. Finally, the friends got into their car and drove west toward Mount Vernon until they were able to pick up a signal and call 911. Inlow's body was found the following day, just 100 yards from where he was last seen.

Just last week, Knox Pages reporter Grant Pepper detailed the accidental death of 40-year-old Mark Booth, of Mount Vernon. He was found approximately 4,500 feet downstream from where he was last observed after a tubing incident in Eastern Knox County. Local law enforcement responded to a call Thursday, June 6 at 5:04 p.m. concerning a possible drowning near Caves Campground. A 42-year-old woman hanging onto a tree branch was rescued, but Booth could not be located.

That's at least 10 victims in the last 100 years, and there may be other accidents that did not appear in the archives inspected. That toll will continue as long as people forget that the Kokosing is a powerful river, no matter how calm its surface may seem.