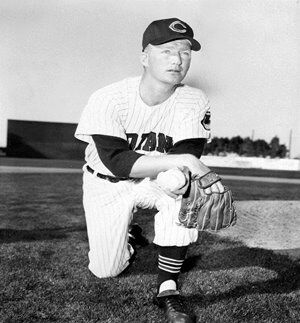 Herb Score was a lefthanded ace for the Cleveland Indians in the 1950s. 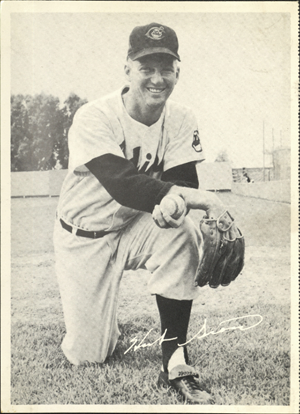 Herb Score was a member of the Cleveland Indians starting rotation in the 1950s. 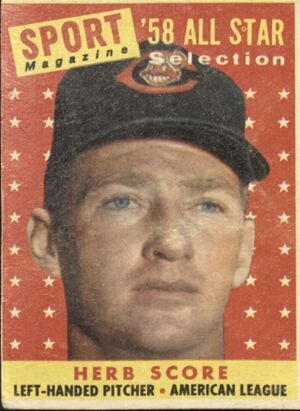 Score overcame adversity and injury from childhood to old age. At age 3 he was run over by a truck that broke his legs below the pelvis. Doctors were afraid he would never walk again, but the bones settled back into place on their own.

A few years later he contracted rheumatic fever and was bed ridden for 10 months.

In high school he fractured his ankle playing basketball and, with cast still on, had an emergency appendectomy.

Score started playing baseball at Holy Name of Mary School in Rosedale as an outfielder, but the team needed a pitcher and he was it. His mother and father separated and Herb and his mother moved to Lake Worth Florida. He threw six no-hitters for the Lake Worth Community High School baseball team and led the school to its only state baseball championship.

His pitching prowess soon spread far and wide and he was discovered by Cleveland Indians scout Cy Slapnicka. Herb signed his contract with the Indians on June 7, 1952 with a $60,000 bonus.

His first professional pitching season included 10 starts, with a 2-5 record. But he allowed only 37 hits in 62 innings. Control was his issue, as he walked 62.

In 1953, Score was sent to Class A Reading, Pennsylvania of the Eastern League. There he met his soon to be lifelong friend and roommate Rocky Colavito. At Reading, Score's record was 7-3, and he gave up only 64 hits in 98 innings, but still walked 126 batters. Yet again an injury cut short his year. While shagging fly balls he landed on his pitching shoulder and separated his collarbone from the joint. While off he completed his credits for Lake Worth High School and received his diploma.

In 1954, Herb, Rocky and their Reading manager Kerby Farrell moved up to Triple A Indianapolis. While the parent club in Cleveland won a record 111 games and went to the World Series in ’54, Score set some records himself. He produced a 22-5 record, gave up 140 hits in 251 innings, and had a league low 2.62 Earned Run Average (ERA). Score set an American Association record with 330 strikeouts, and gave up only 140 walks. He was named American Association’s Most Valuable Player, and Sporting News Minor League Player of the Year.

That sent Score to the Majors in 1955 and he was again outstanding. The lanky left was named Sporting News Rookie of the Year in the American League. He led both leagues with 245 strikeouts, breaking the rookie record of 227 set by the Phillies Grover Cleveland Alexander in 1911. Score held that record till 1984 when Dwight Gooden of the Mets struck out 276 batters. The southpaw finished the season with a 16-10 record and a 2.85 ERA, and was named to the American League All Star team, although he did not pitch in the game.

The 1956 season was another stellar year for Score. He posted a 20-9 record, led the league with 263 strikeouts, and had a team-beset 2.53 ERA. He was the first pitcher in the modern era to strike out over 200 batters in his first two seasons in the league. Score again made the American League All Star team and pitched a scoreless inning. But the Indians finished second to the Yankees -- as they had in 1955.

Then, on May 7, 1957, Score was struck in the face with a line drive off the bat of Yankee shortstop Gil McDougald. Score suffered a broken nose, lacerated right eyelid, damage to his right cheekbone and right eye. He was hospitalized for three weeks, but suffered vision problems and did not play again in 1957.

In 1958 he joined the Indians in spring training at Tucson, Arizona. He pitched well in April, but in early May in Washington he tore a tendon in his left elbow and sat idle for over a month. On June 14 he injured the elbow again and made only seven more appearances that year, finishing with a 2-3 record.

For a time in 1959 Score looked to be back to his old form. He was 9-5 by midseason, but finished 0-6 and the Indians had to settle for second place, this time to the Chicago White Sox.

In 1960, Score was traded to the White Sox and rejoined his old Cleveland manager Al Lopez along with former players Mike Garcia, Early Wynn, Al Smith and Dick Brown who he had played with in high school. Score went 5-10 and had a 3.72 ERA.

The 1961 campaign started with Score again in Chicago, but by mid-year he was sent to the minors with the San Diego Padres of the Pacific Coast League. His record with the Padres was 7-6 with a 5.10 ERA.

In 1964, Cleveland Indians General Manager Gabe Paul hired Score as a TV broadcaster and four years later he went to the radio broadcast booth. He was well respected and loved by Cleveland fans for 33 years of broadcasting with a low-key, no-frills, non-judgmental style which got him elected to the Cleveland Indians Hall of Fame and three Ohio broadcaster halls of fame. He retired from broadcasting in 1997 after the Indians reached their second World Series in three years.

His bad luck with injury and adversity did not end with his playing days.

In October of 1998, his car was struck and he suffered trauma to his brain, chest and lungs. His orbital bone was fractured as well as three ribs and his sternum. He was placed in intensive care and had a very difficult recovery, but managed to throw out the first pitch at the Indians Home Opener on April 12, 1999.

1955 American League Rookie of the Year