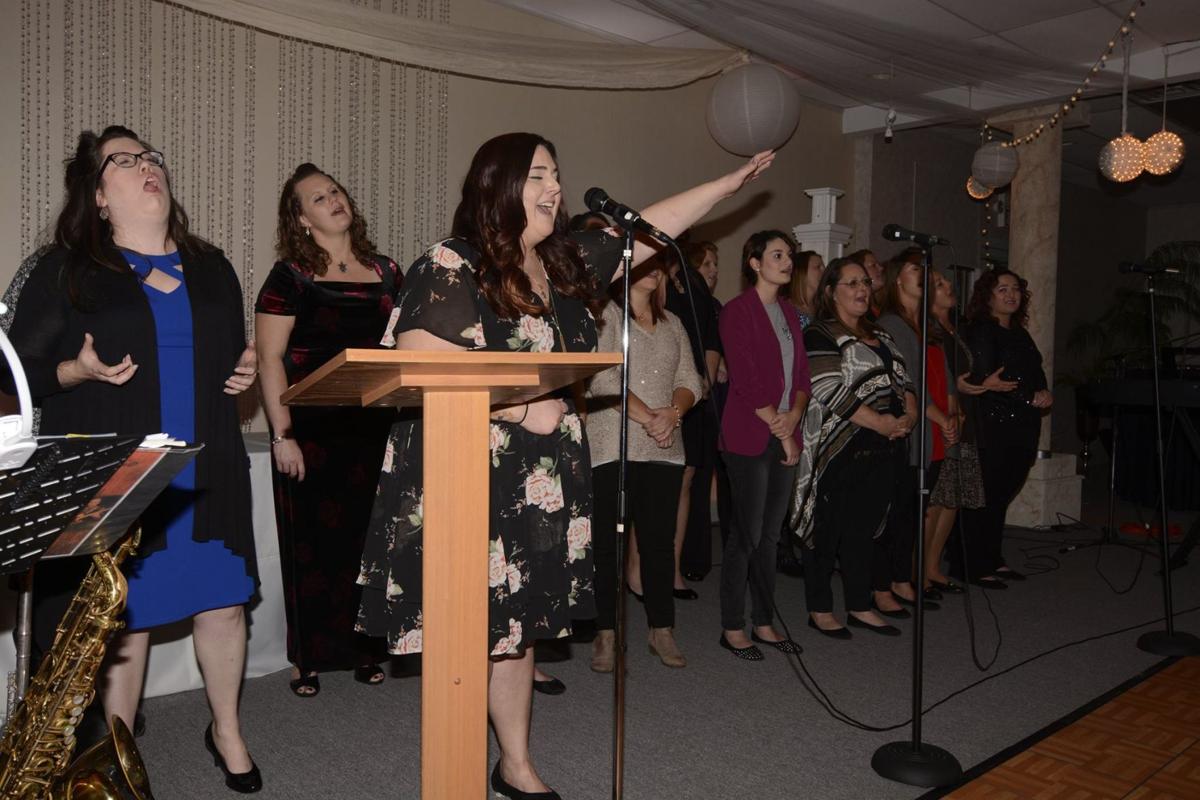 Erin Tuggle singing at a banquet hosted by Adult and Teen Challenge in Willard. Tuggle went into rehabilitation for heroin addiction three years ago. Now, this June will mark three years sober for her. 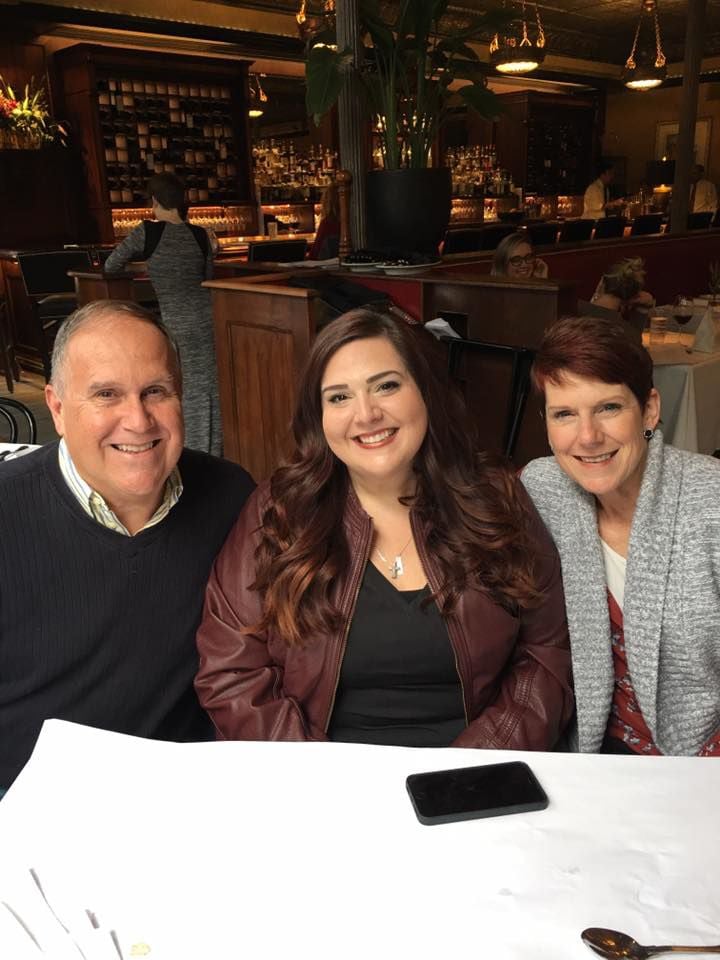 Erin Tuggle and her parents after her recovery at Adult and Teen Challenge. Tuggle now resides with her grandparents in Galion while attending The Ohio State University Mansfield campus as a social work major.

ONTARIO — Erin Tuggle, a social work student at The Ohio State University at Mansfield, recently went into recovery from heroin addiction. Today, she wants to share her story with others so they may receive strength, courage and hope.

Tuggle was addicted to heroin between the ages of 21 to 27. Today, Tuggle is 29.

As a young girl, Tuggle grew up in southwest Columbus. During high school, she started experimenting with different types of drugs. Even so, Tuggle kept good grades and after graduating was accepted into Bowling Green State University.

Tuggle recalled this time period as when her mental health began to suffer and depression started to creep into her life. She began feeling like she couldn’t get out of bed and eventually stopped going to class.

“I remember calling my dad at like 4 o'clock in the morning one semester. (I was) like ‘Dad, I'm going to fail out of all my classes, I haven't been to class in weeks and I don't know what to do. I'm not sure what's going on with me.’”

Tuggle received medical withdrawal from Bowling Green and moved back home to Columbus to get help for her mental health. Confused about what was going on with her at the time, she began to self-medicate.

The pain pills she took gave her a temporary sense of motivation and relief from her depression.

“I felt like it was like helping me. Obviously now (though, I know) it just pushes everything down and numbs it, (but) it's all still there and (drug use only) makes it worse,” she said.

Over the next few years, Tuggle recalled her drug use spiraling until eventually, she began using heroin.

Research suggests that misuse of prescription pain relievers may actually open the door to heroin use. According to the National Institute on Drug Abuse (NIDA), “some also report switching to heroin because it is cheaper and easier to obtain than prescription opioids.”

“You have all these boundaries, like (saying), ‘Well, I’ll never do that.’ And then you just keep going over these lines that you've set until there's really none left,” Tuggle said.

Although the opioid epidemic is commonly discussed in the mainstream media, many people don’t hear stories about those who are overcoming it, recovering and thriving.

Tuggle said she wanted to share her story with the community in an effort to help those who have lost hope.

“The life of an addict is very hopeless, day in and day out,” Tuggle said. “It's like, ‘this is what we have to do. There's no bigger calling on my life (and we’re) just trying to survive.’ (It’s) a tough monster to beat.”

Tuggle went in and out of short-term treatment facilities, but she said she couldn’t stay clean and needed something longer.

“I went down to Florida at one point, I have (gone) all over the place trying to get it right,” Tuggle said.

In 2017, she decided to try a year-long, faith-based program in Willard, called Adult and Teen Challenge of the Firelands. The program is designed to help people with any life controlling issue, but mainly focuses on those struggling with alcoholism and drug addiction.

“You learned to be disciplined and habitual in your daily life (at Adult & Teen Challenge). Like waking up, making your bed. Small things like that really change your mental state,” Tuggle said.

Tuggle believes the distance between Adult & Teen Challenge and Columbus, where she used to struggle with addiction, helped this rehabilitation program be the one that finally kept her clean.

Tuggle’s view of herself began to change the longer she stayed in rehab. However, she said what saved her the most was her faith.

“Through my relationship with the Lord, I was able to learn that I have so much value and all these great things that I didn't see before. I always doubted myself, I was always down on myself. So the realization of self worth and self love that came through understanding how much God loves me - that’s what did it,” Tuggle said.

Finding purpose through her faith and comfort in knowing that something greater than herself guided her, Tuggle is now in recovery. In June, she will be three years sober.

“I lost a lot of self worth throughout my addiction,” Tuggle said. “(Rehab) was the best thing I ever did. I definitely got myself back.”

Now, she lives with her grandparents in Galion and has returned to school after nearly a decade.

“I love it. I love it so much,” Tuggle said. “I love my Social Work classes, so I know I'm on the right path.”

Elaine Surber, Executive Vice President of Catalyst Life Services in Mansfield, said that "getting back to work or school is important as it can provide a routine and sense of stability."

For those currently struggling with addiction, Surber said to "take care of yourself first by eating healthy meals, getting enough sleep, taking medications as prescribed, exercise, and making sure you are getting support from family, friends, colleagues, as well as 12-step and/or faith based groups."

"We recommend continuing with a recovery management treatment plan and staying connected with your counselor, medical professional and peer recovery supporters," Surber said.

Tuggle said to “keep (your) hope and faith, and reach out because there's people that know what it's like to suffer and want to see you recover too.”

One day, Tuggle hopes to do one-on-one and group counseling with people struggling with addiction and alcoholism.

“The bottom line is addicts are all suffering from different trauma, different fear, different experiences that they've had throughout their life and not knowing how to deal with it," Tuggle said. “So helping people work through all that stuff, like someone else did for me, that's the end goal.”

For family members and friends of addicts, Surber said that "supporting and loving someone who is in active addiction can be scary and frustrating for family and friends. Addiction can make people you’ve known for years suddenly become a stranger. Substance use disorders are chronic illnesses, and you may not be equipped to deal with helping your loved one.

"Help yourself by learning more about substance use disorders and mental health, avoid shame and guilt, set healthy boundaries, provide love and join a support group geared towards families."