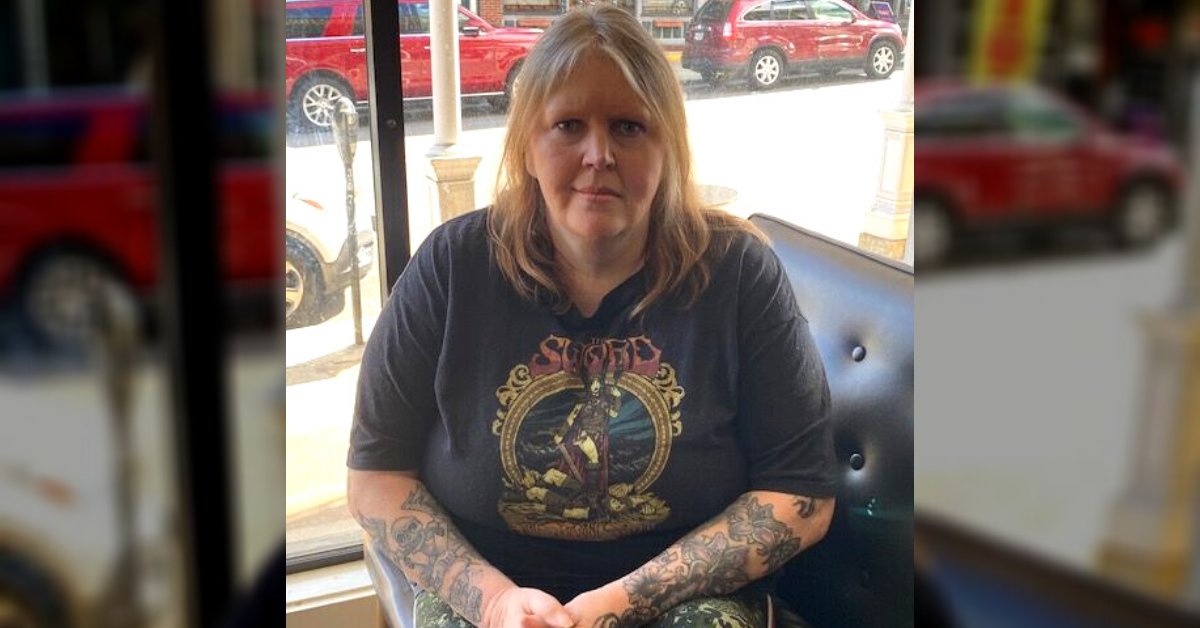 One year after being shot and on the brink of death, Alesia Litteral can now reflect on all she's been through and her purpose in life. 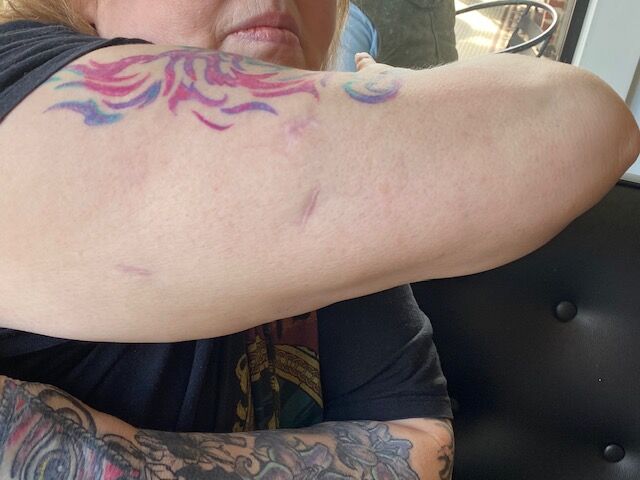 Litteral sustained many bullet wounds in her arms and upper body. 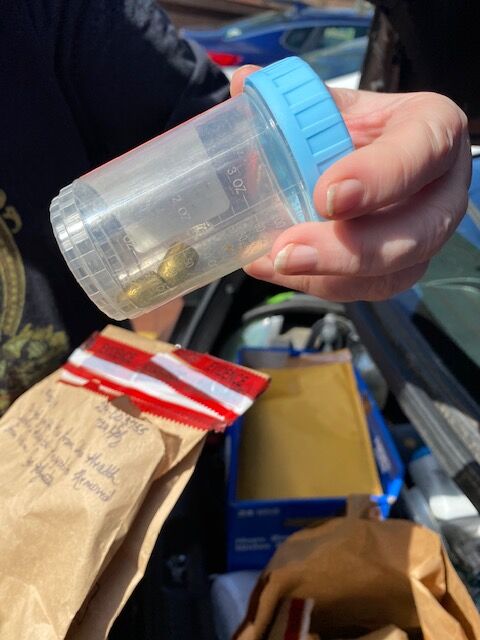 Litteral still has some of the bullets her husband shot her with, though some still remain in her body. 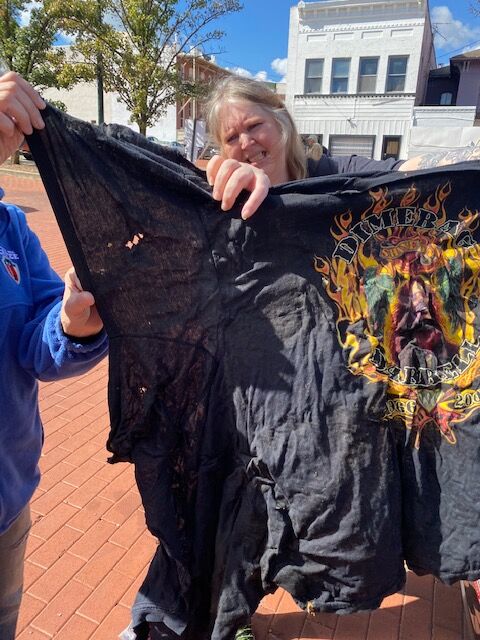 Litteral holds up the shirt she wore on the day she was shot. 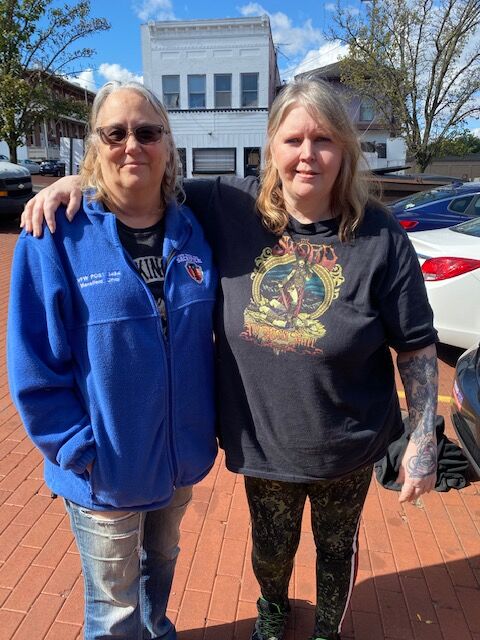 Lisa Manley has seen the hell her best friend has gone through and calls Litteral a "miracle."

MANSFIELD – Alesia Litteral, Madison Township resident, nurses her tea drink while sitting in a crowded area. On the car ride over to Relax, It’s Just Coffee, she had a severe anxiety attack, after which her best friend Lisa Manley had to calm her down.

Being around a lot of people isn’t Litteral’s thing. Not anymore. But despite her nervousness and the stress it puts on her, she takes back control of her emotions and makes it into the coffee shop with her friend alongside her. The only thing stronger than her anxiety is her determination to share her story.

On Aug 8, 2019, Litteral became a survivor of domestic abuse. Her husband, Ian, came home in a drunken rage and shot and stabbed her several times before killing himself in their bedroom.

“I’m killing you tonight,” he said in the midst of his angry tirade against her.

Their story started in 2000, when Litteral was 36 years old and already had a son from a previous marriage. Their relationship went off and on for 14 years until 2014 when Litteral invited him to move into her house. Soon after, though, he quit his job and relied on Litteral for financial support.

“I almost lost my house because I couldn’t pay my taxes because he kept taking all of my money or stealing my charge card,” Litteral said.

After quitting his job, Ian’s behavior got worse, and for the first time, Litteral noticed her husband’s unhealthy drinking habits. She said he would go through a 12-pack of beer in a day, drinking so much he developed myopathy in his fingers and toenails, putting him at risk of needing multiple amputations.

His violence against Litteral began in their final year together once his alcoholism began to show signs of affecting his brain. Litteral had taken him to neurologists, doctors, and treatment centers in previous years, and each time she was warned that if her husband didn’t quit drinking, he would eventually die.

“‘This is not my husband,’” she recalled herself saying the year before, and it was also then where she realized that he was already “dead.”

She kept the abuse a secret from most of her loved ones, only telling very few. Although, on the day she was shot, and in lieu of her husband’s threat, she notified a few friends, ominously saying that she loved them, and if she’d been killed, it was her husband who did it.

A one minute and 16 second voicemail Litteral left for a friend captured those heart-stopping moments that she thought would be her last. Several rounds of gun shots were fired, along with her blood curdling screams and pleas.

“I loved you so much!” she can be heard yelling after being shot.

Litteral has gone through a long series of trials, tribulations and great tragedy in her life.

When she was a little girl, she witnessed her father physically abusing her mother, causing her to have her first nervous breakdown at 6 years old. In 1985, her brother was murdered by his wife, and in 1993 she lost her father to leukemia. Almost 30 years later, in 2013, her mother passed away due to dementia, and she lost her son in the same year as well from a heroin overdose.

Through all of those tragedies, great losses and constantly being knocked down, Litteral chose to stand back up again. Having already lived through so much already, and by some miracle, she also found the will to keep herself alive that day.

“There's no doubt in my mind that (her husband) thought he killed me. He wouldn't have let me live,” Litteral said.

Once she regained consciousness, she stumbled over to her next door neighbor's house for help. After the ambulance arrived, she was transported to OhioHealth Mansfield Hospital, and her extensive injuries caused her to be placed in a coma for a week.

Manley never knew of Litteral’s abuse. So, when she saw several of her friends’ posts on Facebook about Literall’s condition, she was genuinely floored.

“I think (Litteral’s) a miracle, because she had a lot of friends praying for her,” Manley said. “For as serious as it was, she came through by the grace of God, and He has plans for her.”

Litteral needed someone to take care of her once she got out of the hospital, and Manley graciously accepted that role.

“I offered. I wanted to do it,” Manley said. “She’s been my friend for years and I told her I’d be there for her. That was the way I could help her, so that’s how I did.”

Compared to around the same time last year, which saw 167 individuals seeking shelter, there hasn’t been a significant increase. Despite COVID-19, the Domestic Violence Shelter continues to help anyone who needs it.

“I think it's important that people know that we are open, and if (they) need safe shelter, we can accommodate,” said Jill Donnenwirth, director of Community Based Services.

Litteral still lives in the same house one year later, though she secludes herself to one room, and she still grapples with her anxiety and PTSD. She continues to work through it by going to a psychologist 3-4 times a month and accepting the help she’s been offered.

“As soon as (the police) told me he was dead, I started living. I said, ‘God has my back, I’m good.’ So I just kept getting better and better,” Litteral said.

Despite everything she’s lost in her life, Litteral looks hopefully toward the future. She wants to help others who’ve been affected by domestic violence and share her story. So far, she’s given testimonials in church, and she’s housed other victims in her house who’ve personally reached out to her for help.

“If you've got those hairs sticking up on your neck, and you know something isn't right, don't stick it out,” Litteral said. “I don't care what you’ve got to do. Go to the Domestic Violence Shelter or wherever and get away from that situation. Once (the abuser) starts, it's not going to change.”

With this second chance at life she’s been given, Litteral wishes to help as many people as she can.

“Between your birth and your death, you want to leave with a good dash, you want to leave some part of yourself knowing that you've done some kind of good—make a change,” Litteral said. “I don't want to be remembered as that chick who was almost murdered by her husband.”