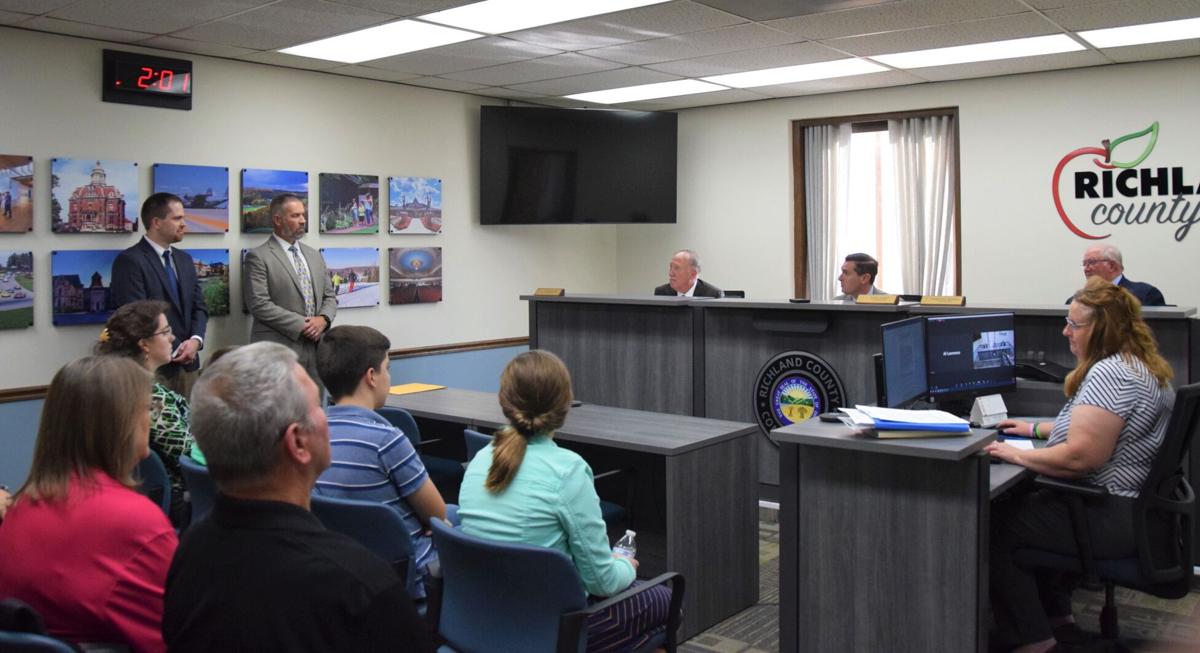 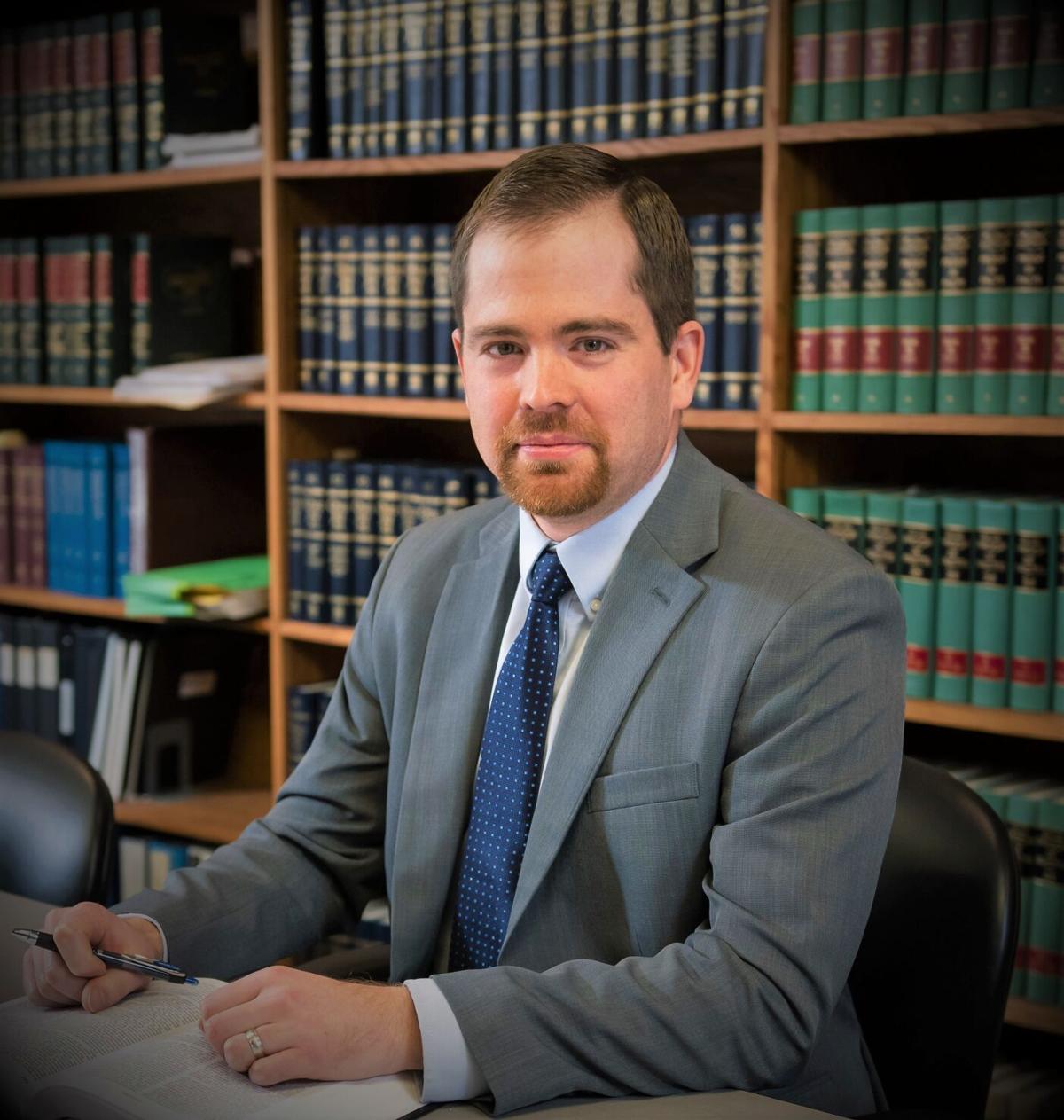 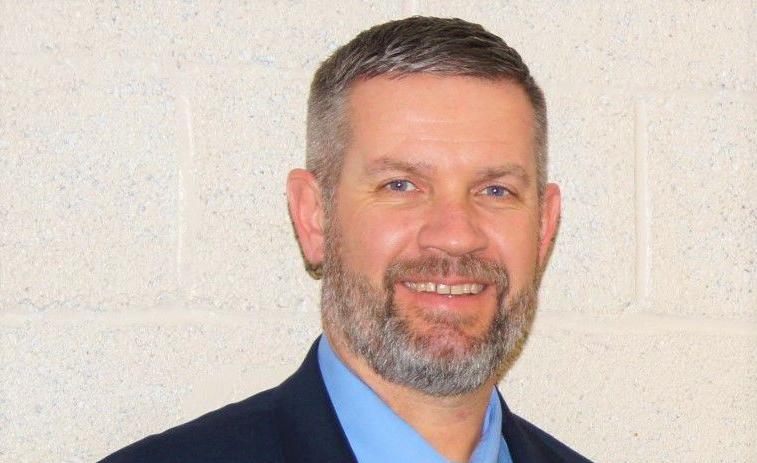 Joseph Petrycki was introduced Thursday as the new incoming Richland County Emergency Management Agency director. He retired from the City of Mansfield in June as the assistant police chief, serving 25 years in the department. (Richland Source file photo) 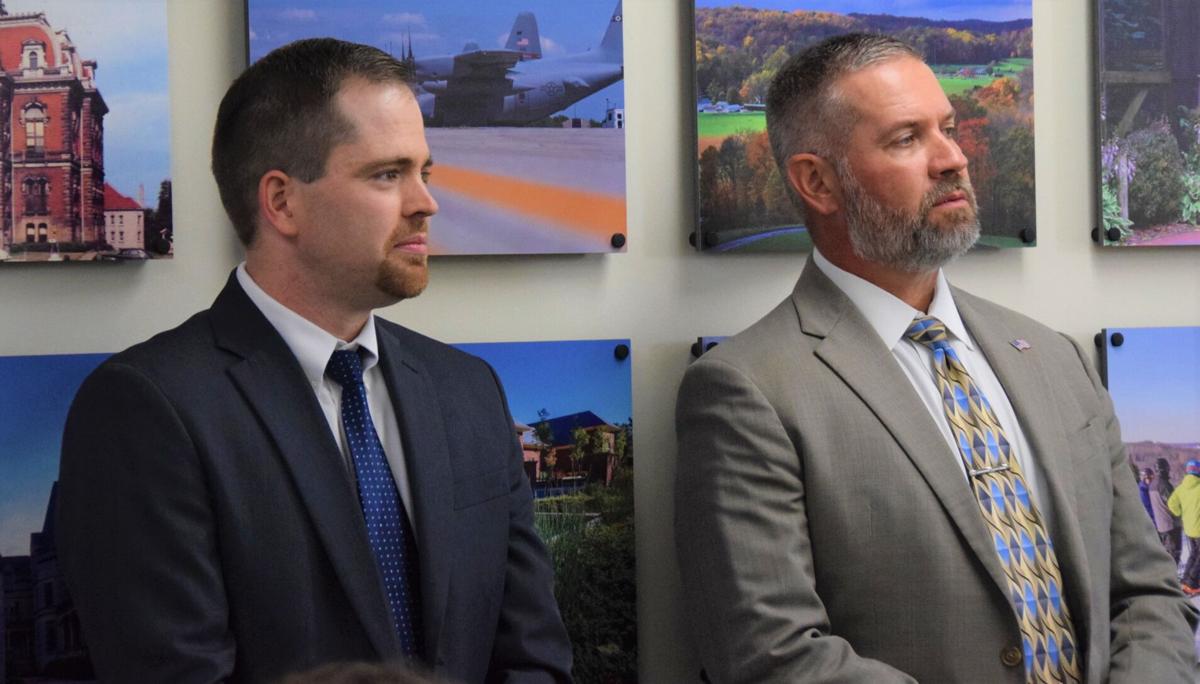 MANSFIELD -- Andrew Keller said he believes local government is the bedrock of the nation's democracy.

Introduced Thursday as the first-ever Richland County administrator, the 35-year-old Keller will now gain hands-on experience in helping run a local government that was formed in 1808.

Keller, an attorney who spent the last decade in the Richland County Prosecutor's Office, was one of two hires announced by county commissioners Thursday, both of whom bring the benefit of past public service.

Joe Petrycki, who retired from the Mansfield Police Department as the assistant chief in June, will become the county's new Emergency Management Agency director.

Also with prior military experience and the former commander of the METRICH drug task force, the 49-year-old Petrycki replaces Rick Evans, who has announced his retirement at the end of the year.

"We certainly didn't hire Andrew to free up commissioners (time). We don't want that and neither do the taxpayers," Vero said, instead citing Keller's knowledge of contracts and procurement efforts.

"This was an opportunity to bring in a subject-matter expert for Richland County. We want to be creative and proactive with those ARPA dollars. Hiring Andrew was a no-brainer (hire) for this stuff," Vero said.

Keller's ability to seek additional grant funds is a key element of his hiring, Vero said.

"It's not a big surprise to anyone that there is a lot of (federal and state) money currently out there right now and we want to bring in as much as we can for Richland County," Vero said, indicating Keller can also be a resource for municipalities, villages and townships around the county in understanding the ARPA process.

Keller will be paid $90,000 annually. Vero said any time Keller spends on ARPA fund efforts will be reimbursed under the federal allocation guidelines.

Of the 25 most-populous counties in Ohio, Richland County is one of just two that has not employed a county administrator, Vero said. Trumbull County is the other, featuring a board of deeply divided commissioners.

Keller, who spent most of his career in the prosecutor's office civil division, told Richland Source earlier this week he developed had a "great respect" for the current board of commissioners "through working with them on countless issues."

"For that reason, it was an honor to be asked to become the county administrator," Keller said. "But I think what sealed the deal for me was I share the same vision that this board has for Richland County.

"This board has what I call a stewardship mentality with respect to county funds, whether it be general fund money or grant funds. They don't view money in the county treasury as the commissioners' money or government money," he said.

Keller, who lives south of Hayesville in Ashland County with his wife, Amy, and their three children, said the current trio of commissioners view public funds as taxpayer dollars.

"So every decision they make, when it comes to county spending and disbursements, is seen through that lens. There needs to be a direct connection between an expenditure and a benefit to Richland County as a whole," said Keller, also the chair of the Ashland County Board of Elections. 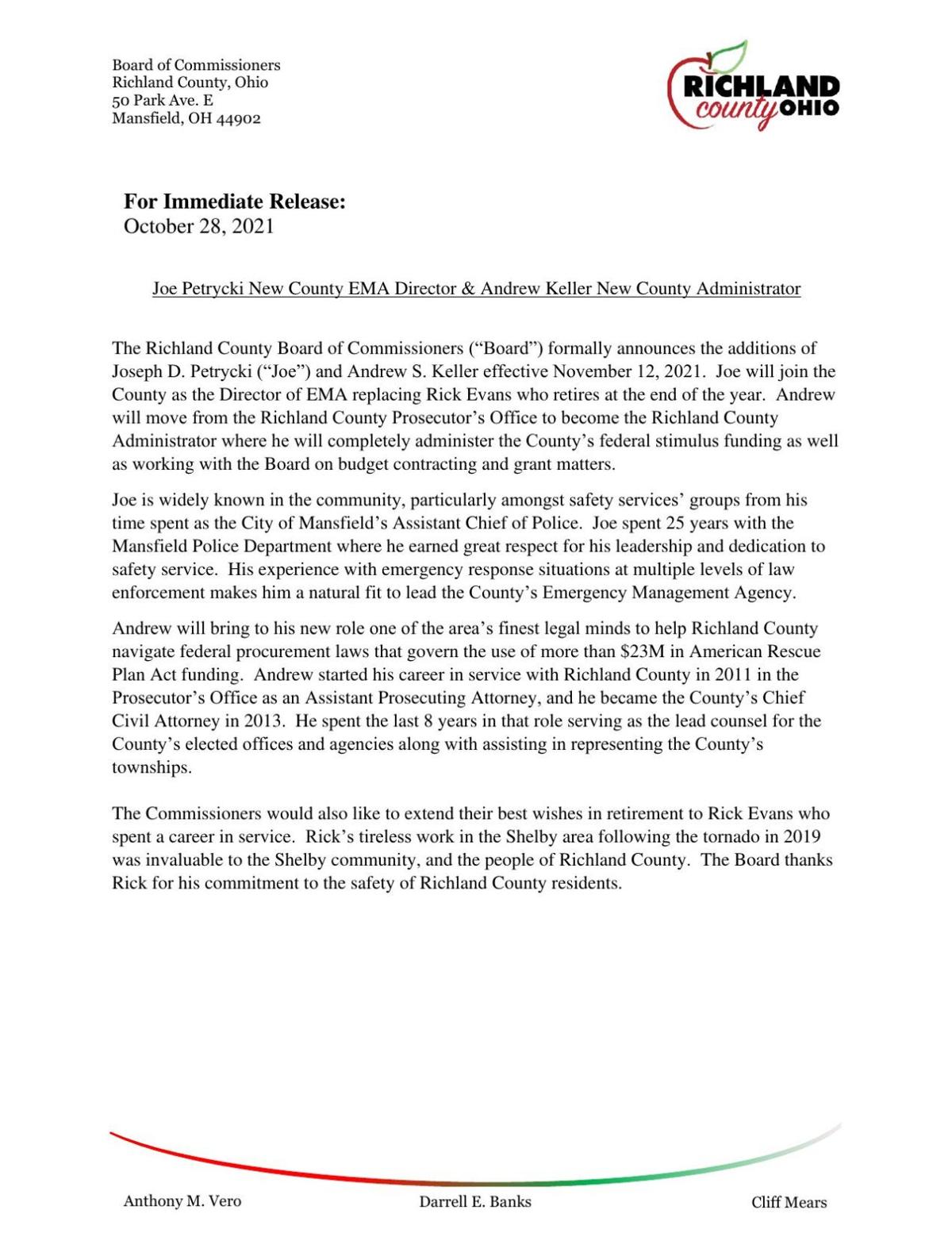 "I've always had a strong interest in local government and administration," Keller said. "I've been blessed to know for a long time what I enjoy and what motivates me. It's a blessing because it helps guide your decision making. I have been thankful to find a lot of purpose in local government."

Keller graduated from law school in 2011 and was immediately hired as a full-time assistant prosecutor by then-Prosecutor James J. Mayer Jr. He was promoted to chief of the civil division in 2013.

Keller will not have supervisory duties in his new role, though he is familiar with all county departments and elected officials in his role as legal advisor in the prosecutor's office.

"I can honestly say I've enjoyed working with the wonderful people around the county, even more than the (legal) work itself. This new position will involve just as much of that, if not more, and I look forward to that," Keller said.

"I intend to hit the ground running. Being from the prosecutor's office, you're always running," he said with a laugh. "I will begin working with the grant administration, contract review and preparation, and budget planning and analysis."

Keller said he has appreciated the "measured approach" the board of commissioners has used in allocating ARPA dollars.

The county, which received half of the funds this year and will receive the second half next year, has appropriated $1 million for a small business grant program and set aside $3.2 million to make up for projected loss revenue due to the pandemic.

Under current ARPA guidelines, local governments have four years to appropriate the money and six years to spend it.

"Even now, Congress is discussing a change to the law that would impact the eligible-use category for American Rescue Act Plan funding," he said. "It's important to the commissioners, being stewards of the money, to maximize these funds in way that provides the biggest benefit possible to the people of Richland County.

"So we are being sure to understand the lay of the land prior to making any decisions, let alone rash decisions," Keller said.

Infrastructure improvement around the county is one of his goals with ARPA funds.

"We have a lot of aging infrastructure that has needed to be repaired or replaced for many years and we haven't had the funds to make those improvements," he said. "We have a real opportunity here with the (ARPA) funds to make improvements that will support the county for years to come.

"This is more than just a shot in the arm. Long-term solutions personally are exciting to me, even more than temporary, short-term infusions," Keller said.

In his role guiding the county's Emergency Management Agency, Petrycki is tasked with coordinating and collaborating with agencies around the county, region and state to "develop and maintain a comprehensive plan to prepare for, respond to, and recover from all natural and man-made emergencies that may impact our county."

The veteran law enforcement officer, who will be paid $51,826 annually, said such work has been essential to his career.

"It's a matter of meeting and seeing what I can do them and what their agencies can do for EMA," he said. "It's all about collaboration. During my time in METRICH (a 10-county drug task force), I learned how to depend on and work with a lot of people.

"That's kind of what my mindset will be coming into this (EMA) position," Petrycki said. "I know (Mansfield Fire Chief) Steve Strickling and his assistant chiefs. I will meet with them and the the township fire chiefs, seeing what their priorities are. I look forward to open lines of communication."

Petrycki began his 25-year law enforcement career with the MPD in 1996. He made sergeant in 2008, lieutenant in 2014 and was selected as the assistant chief in 2019. He earned a bachelor's degree in criminal justice and sociology from Ashland University.

While with the MPD, the North Canton native worked in a variety of roles, including the community services bureau, major crimes, special investigations and METRICH.

Petrycki was a member of and later commanded the department's Allied Special Operations Response Team (ASORT/SWAT).

During his tenure, he earned awards for Officer of the Year, Military Service Award, Supervisor of the Year and the Legion of Merit.

His military experience came from 1993 to 1998 when Petrycki served with the 112th Combat Engineer Battalion with the Ohio Army National Guard.

"Being in public service for so long, it's just a calling for me," he said when asked how the county drew him out of retirement.

Petrycki said he will benefit from the opportunity to work with Evans for six weeks before he takes over the office.

"There is a lot I probably don't know and will need to learn," he said. "With my history of working on critical incident response teams, I think I have a pretty good foundation. I am looking forward to it."

The Richland County Park District may seek a property tax levy in 2022 as it works to open the Fleming Falls Nature Preserve.

Source Brand Solutions is hiring for an Account Executive