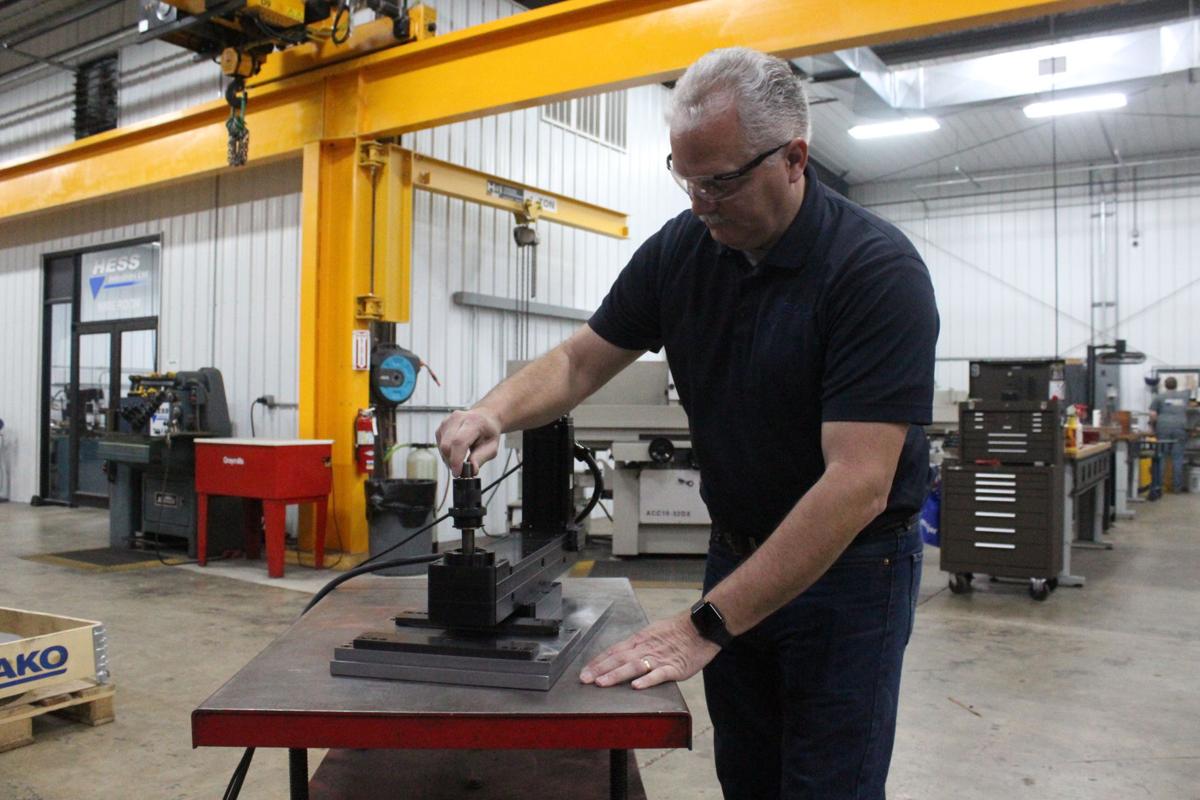 Mark Hess, founder of Hess Industries Ltd., tests an in-die tapping unit. The company produces the unit as a value added product for other tool shops around the world. 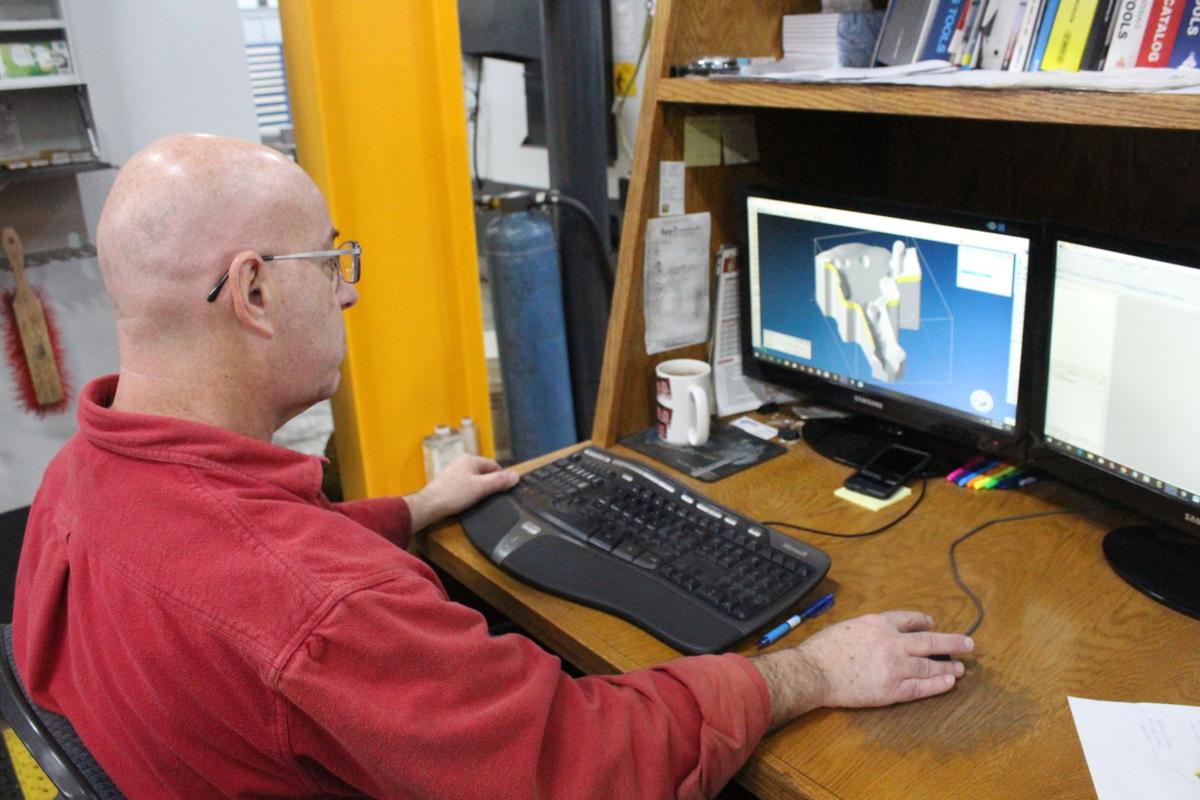 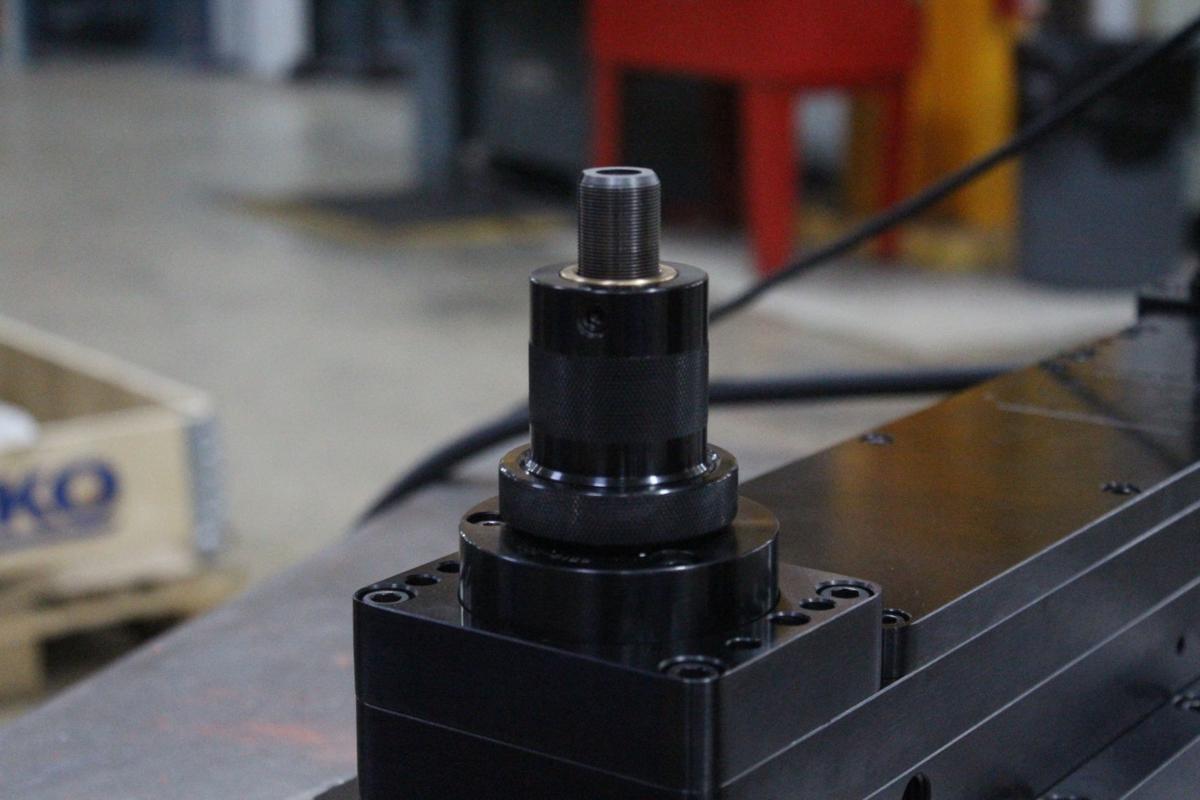 A close-up view of the in-die tapping unit that propelled Hess Industries to a global supplier. 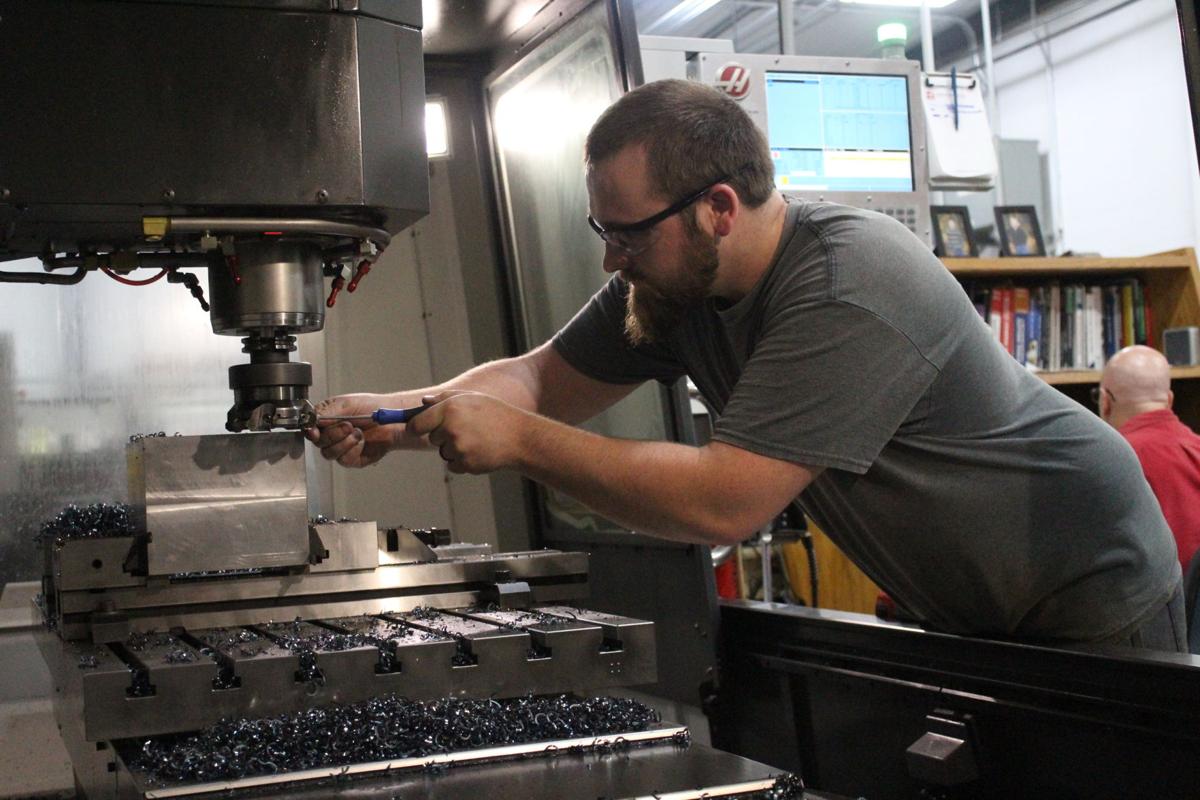 Jake Leonhardt changes the inserts on a CNC Machine inside the Hess Industries shop. 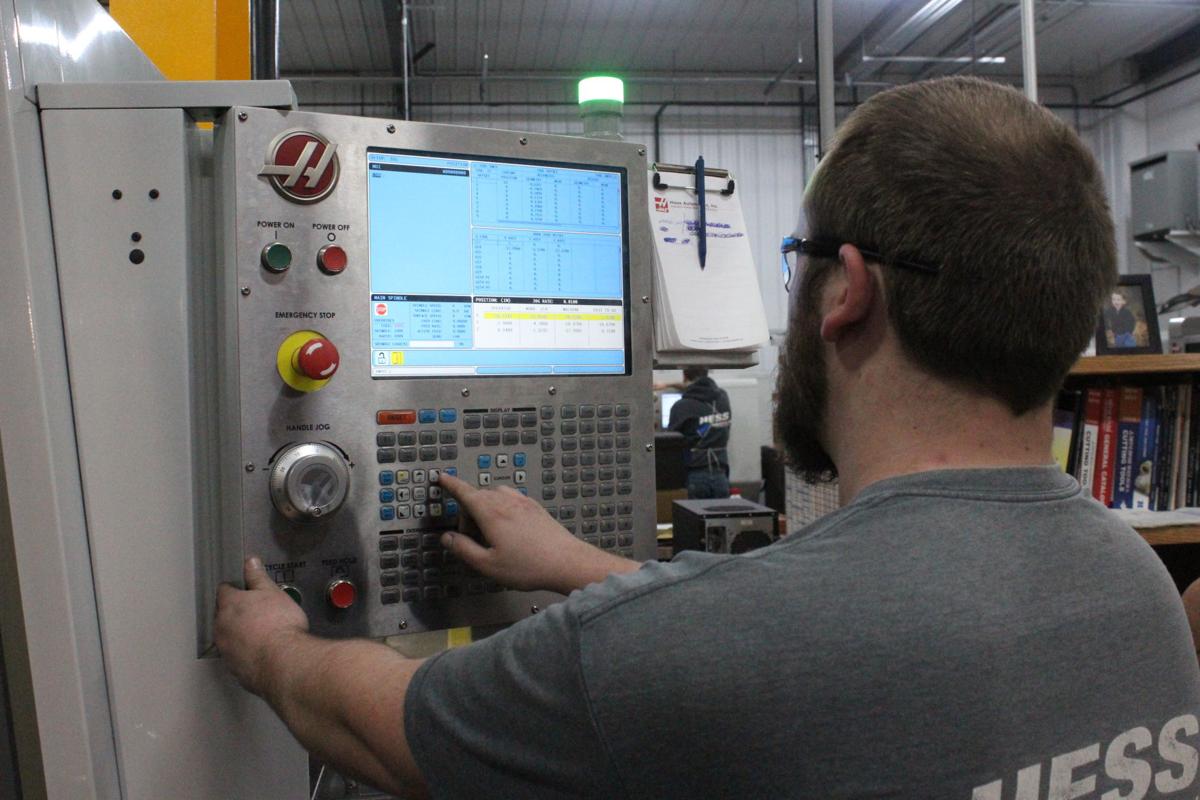 An employee at Hess Industries calls up a program on a CNC machine. Today's tool and die makers have to be comfortable adapting to rapidly changing technology.

MANSFIELD -- It’s easy to take for granted the numerous metal products around us. Phone chargers, pots and pans, door hinges are all so ubiquitous, it would be easy to assume they are near-effortless to make.

Yet all of these products owe their existence to the tool and die makers. They manufacture the equipment that is foundational to mass production -- the tools, molds and stamp dies used by other manufacturers to make goods. Any object that’s been cut, formed, shaped or molded out of sheet metal was made with tools and dies.

Inside Hess Industries Ltd., a tool and die shop in Mansfield, workers program machines to mill and heat treat metal, grind it down and meticulously slice it with electrically charged wires. Sometimes the products are large, other times they’re no bigger than a pinkie finger. In tool and die, precision is the name of the game -- employees are working with measurements as fine as 1/30th of a human hair.

Modern tool and die workers are skilled technicians, who are constantly learning and adapting to the industry’s latest technology. Coding, programming and virtual design have become essential skill sets.

“Today's tool and die shops are not your grandfather’s machine shop,” said Mark Hess, who founded Hess Industries in 2000. “They are technical centers that use state-of-the-art machinery throughout the entire facility.”

At the turn of the century, experts warned that the tool and die sector was dying. Hess Industries is a prime example that the opposite is true. Tool and die is not dying. It’s evolving.

Thriving against the odds

Hess defied industry trends when he opened his own tool and die business 20 years ago. Looking back, he describes it as a call from God.

“I had to really lean into my faith,” Hess said. “There was a huge risk that we could lose it all, but I really felt led by God and knew that he would take care of us through the thick and thin.”

Hess and his wife Pam sold their home and put all their personal equity into the business. Hess Industries opened in June 1999 in a rented workspace inside Braintree.

The company remained steady as the recession took its toll on the manufacturing industry. Hess believes staying ahead of the technological curve was a key factor in his business' survival.

“A lot of tool and die shops went out of business in 2008 because they didn’t grasp the modern tech,” Hess said. “We were able to thrive through all that. It wasn’t easy.”

While some tool and die shops were resistant to changes within the industry, Hess Industries was an early adopter of computer-aided drafting (CAD) and computer-aided manufacturing (CAM) technologies.

“What Mark does is he embraces new technology to try to always stay ahead of the curve. He was always up to speed on what the newest technology was,” said Tom Hutchison, Hess' business partner and president of Hutchison Tool Sales.

“When I look at the future of tool and die, I see more technology used to build the tooling,” Hess said. “In a way, it’s kind of less craftsmanship, but in another way it’s a different way of being a craftsmen and doing it in a 3D virtual world.”

Hess Industries integrated 3D solid modeling into its operations in 2002.

Every product Hess Industries makes starts with a virtual 3D blueprint. Through a process called computer-aided manufacturing, CNC machines can write program code based on the 3D model and create the physical part.

"Our CNC machines are capable of being programed to run unattended and allows our team to do other tasks while the machine is producing the parts,” Hess explained.

Rather than drawing out 2D plans, making the part, testing it and then tweaking it, having a 3D model means the part can be viewed from all sides while still in the concept stage and “tested” with other 3D parts without the need for a physical prototype. 3D models are also easier to share with clients, since digital plans can be easily transmitted across the world.

“It gives you more of a virtual look of what you’re building before its built,” Hess explained. “We can actually look at on a virtual screen, they can fit it in their virtual die and say ‘Yes, that fits.’”

Hess Industries makes a variety of products for local clients, with most of its business coming from the automotive, lawn and garden appliance and electrical industries. One product, however, gives the company a worldwide reach -- mechanical and servo in-die tapping units. When inserted into a die, the unit combines two processes into one by allowing dies to stamp (punch a hole) and tap (thread the hole) at the same time.

“A lot of our tapping units will make over up to 20 million hits and some people do up to 100 million. Some people will only run them a million parts in their life cycle. It all depends on the customer,” Hess said.

Hess Industries is one of just three companies in the world that make the product, which is sold through a partnership with Hutchison Tool Sales. Clients include tool and die shops in Australia, the Netherlands, Turkey, Argentina, Canada, Mexico, Ireland and South Korea.

“They’re a tremendous shop,” Hutchison said. “Anybody who’s ever worked with Mark would know that he’s a high-quality, character person who does what he says.”

Twenty years into operations, Hess Industries is still experimenting with new methods and technologies. Hess argues that it’s better to make mistakes and learn from them than to stay stagnant.

“You can’t be afraid to make a change, to try something,” Hess said. “A lot of our training is hands-on type training and trying and figuring out what doesn’t work. We build an environment where people are not afraid to lose their job by making the wrong decision.”

The latest addition to the shop is two 3D printers, which can print with both onyx and continuous carbon fiber. The company purchased them for the production of new in-die clinching units, but is already utilizing the tech elsewhere. Hess hopes to eventually purchase a 3D printer with the capability to print metal.

Such automation is sometimes feared as something that will eliminate jobs, but Hess believes its essential to operating efficiently at a competitive cost. It also allows workers to focus more on creative solutions.

“We can do more of the fun stuff and less of the more mundane things,” he said. “By having more high-tech solutions, we’re able to keep more jobs here in the United States and our jobs become more technical and less boring.”

“I don’t think (automation) would fully ever take over,” said Ryan, a tool and die maker who’s currently learning to code new equipment. “I think robots and the electrical world will help us do the jobs we don’t want to do. More than take our jobs, it’ll make our jobs easier.”