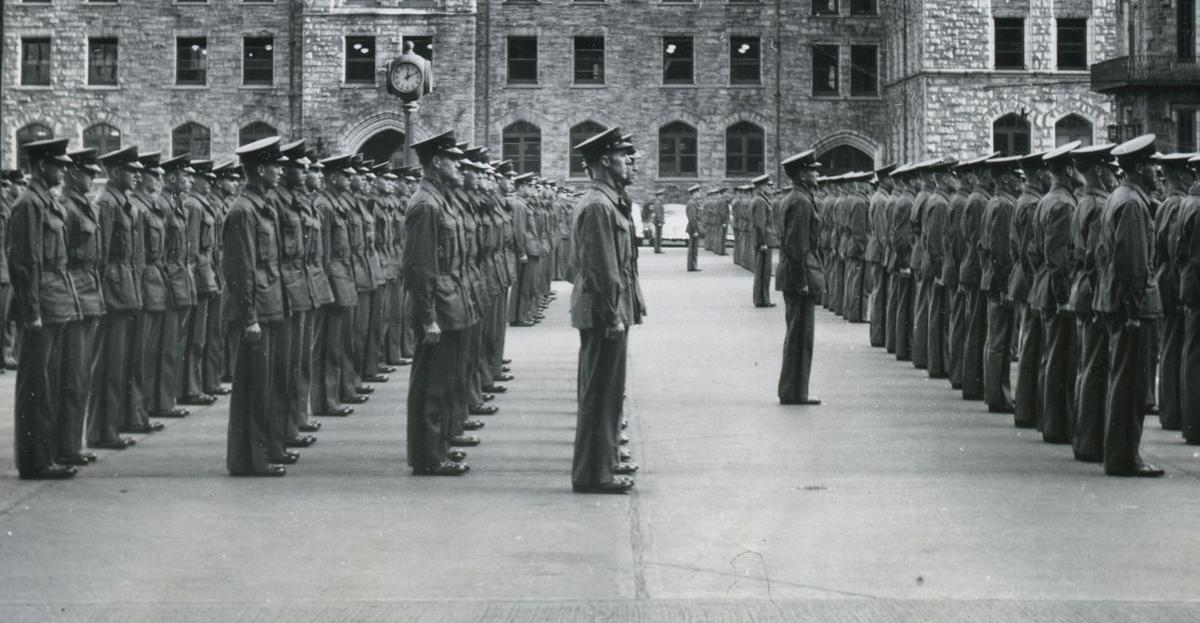 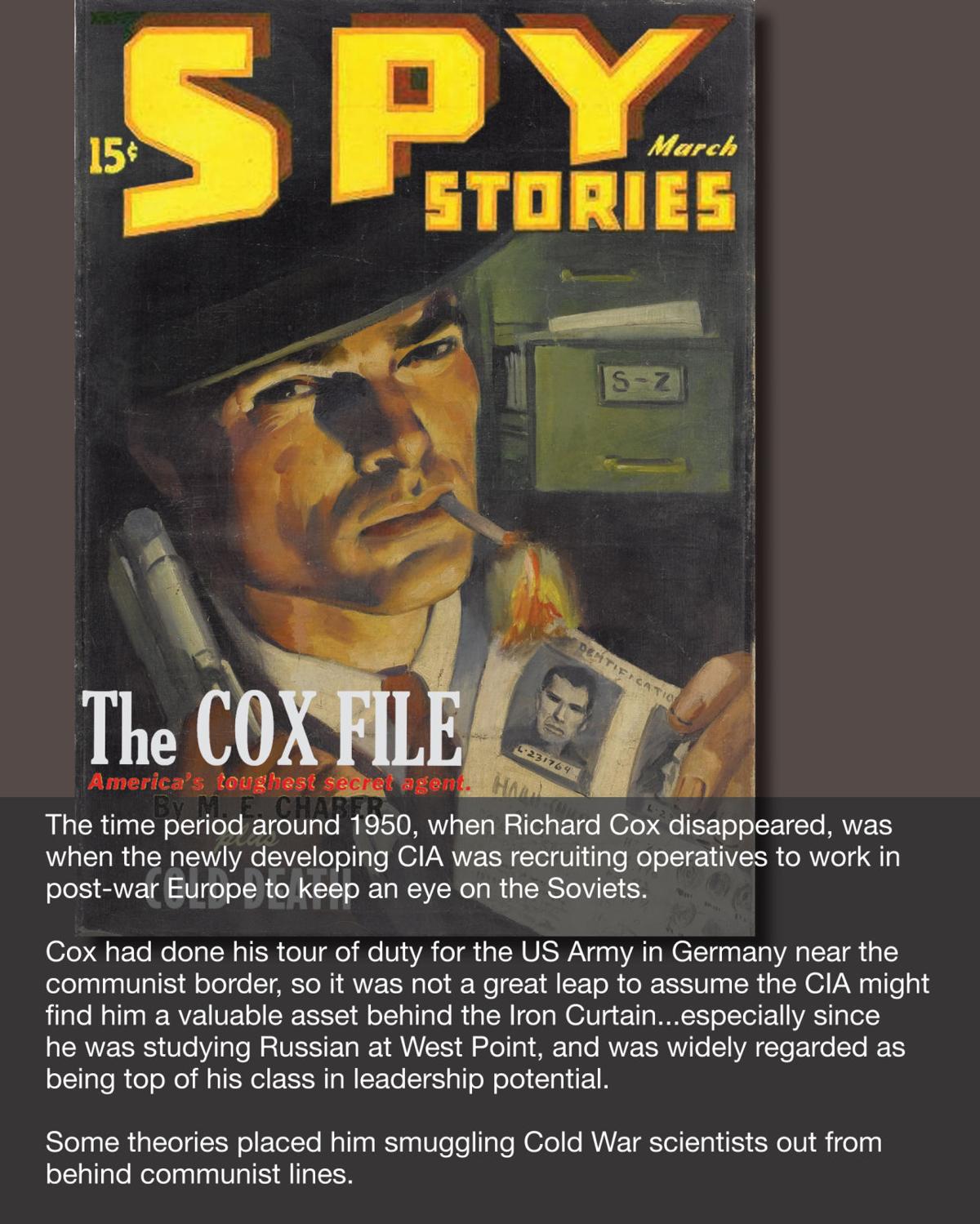 Some theories claim he became a spy during the Cold War. 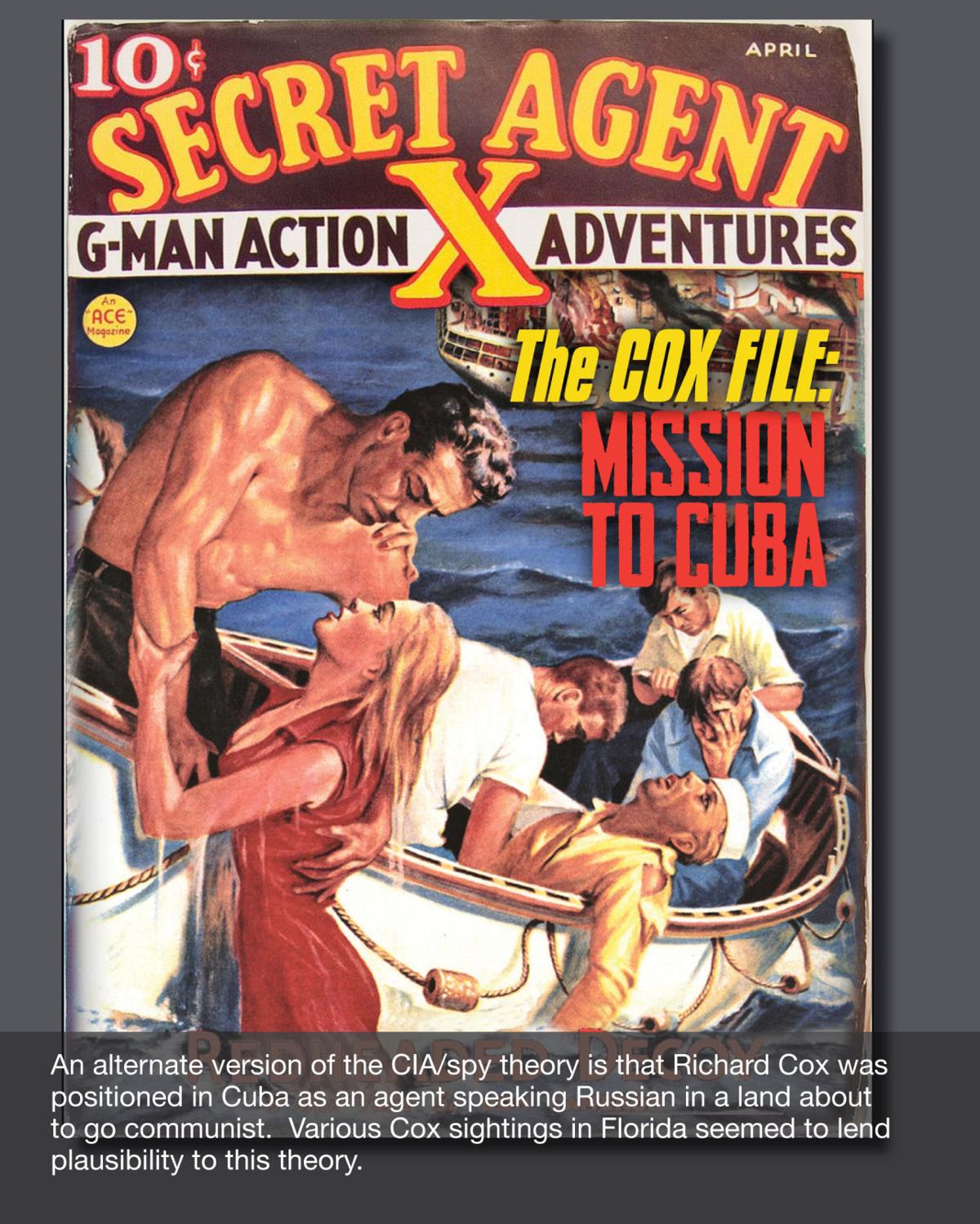 Some theorize that he became a US spy in Cuba. 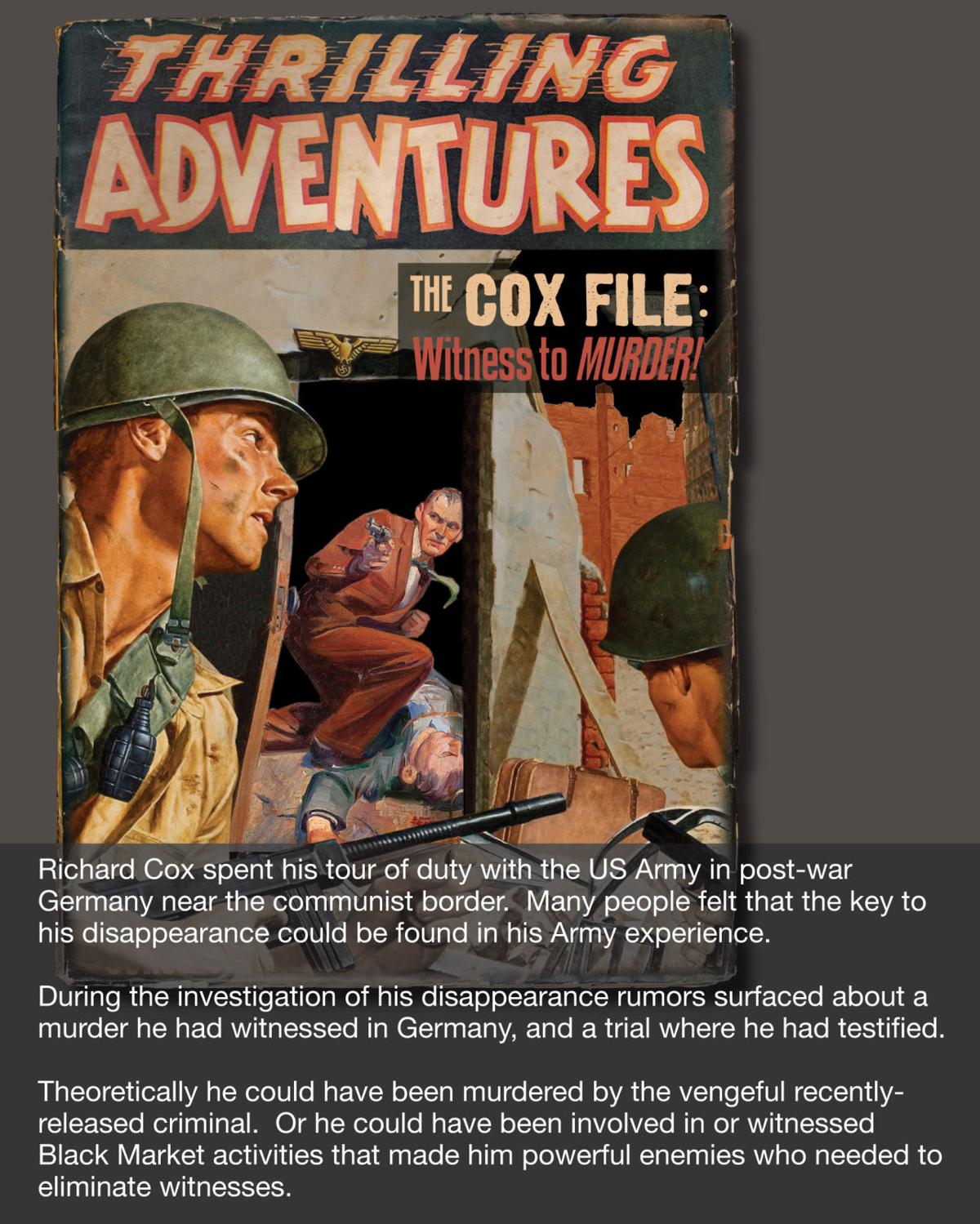 Many believe the key to his disappearance can be found in his US Army experiences. 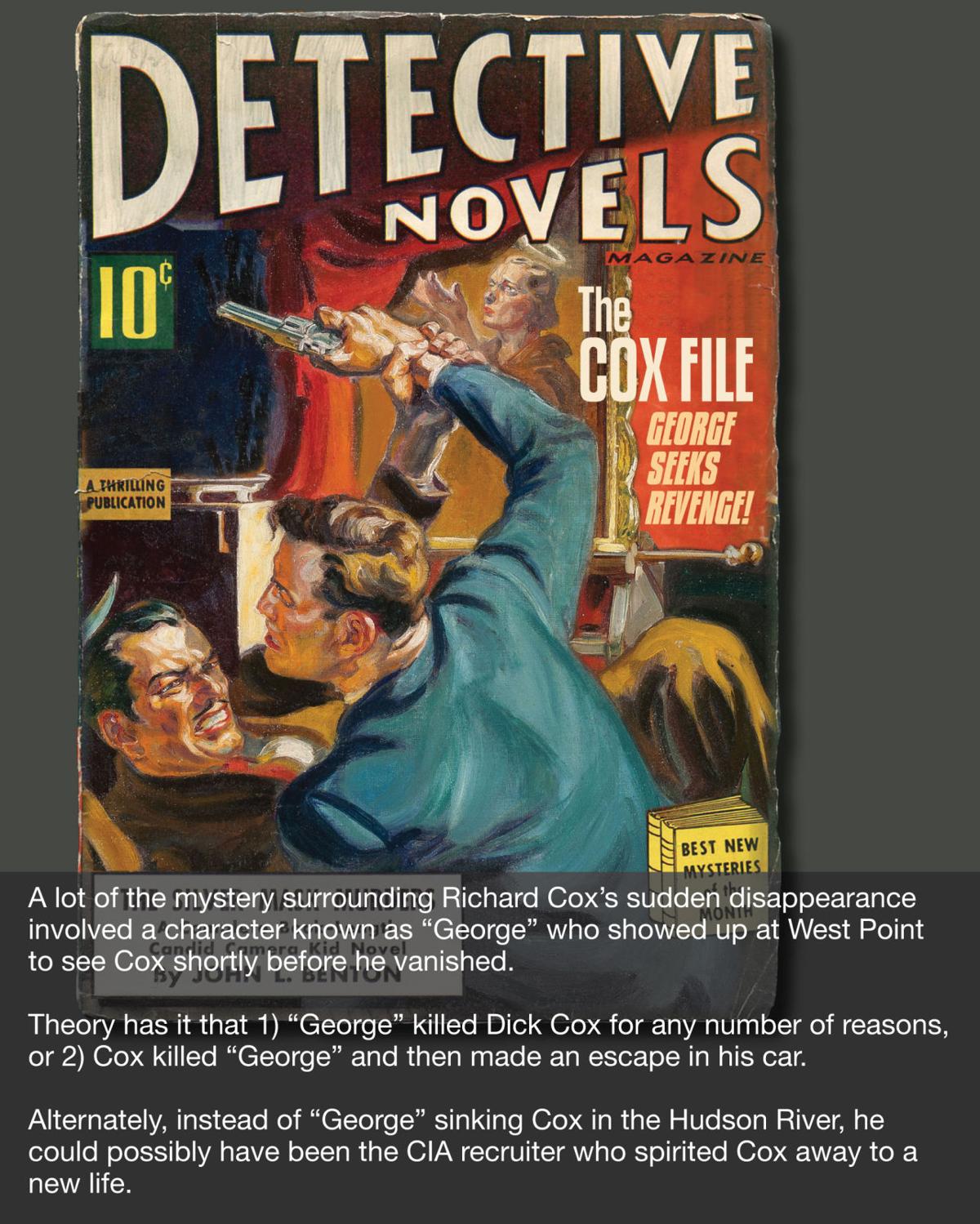 Many assume he was murdered. 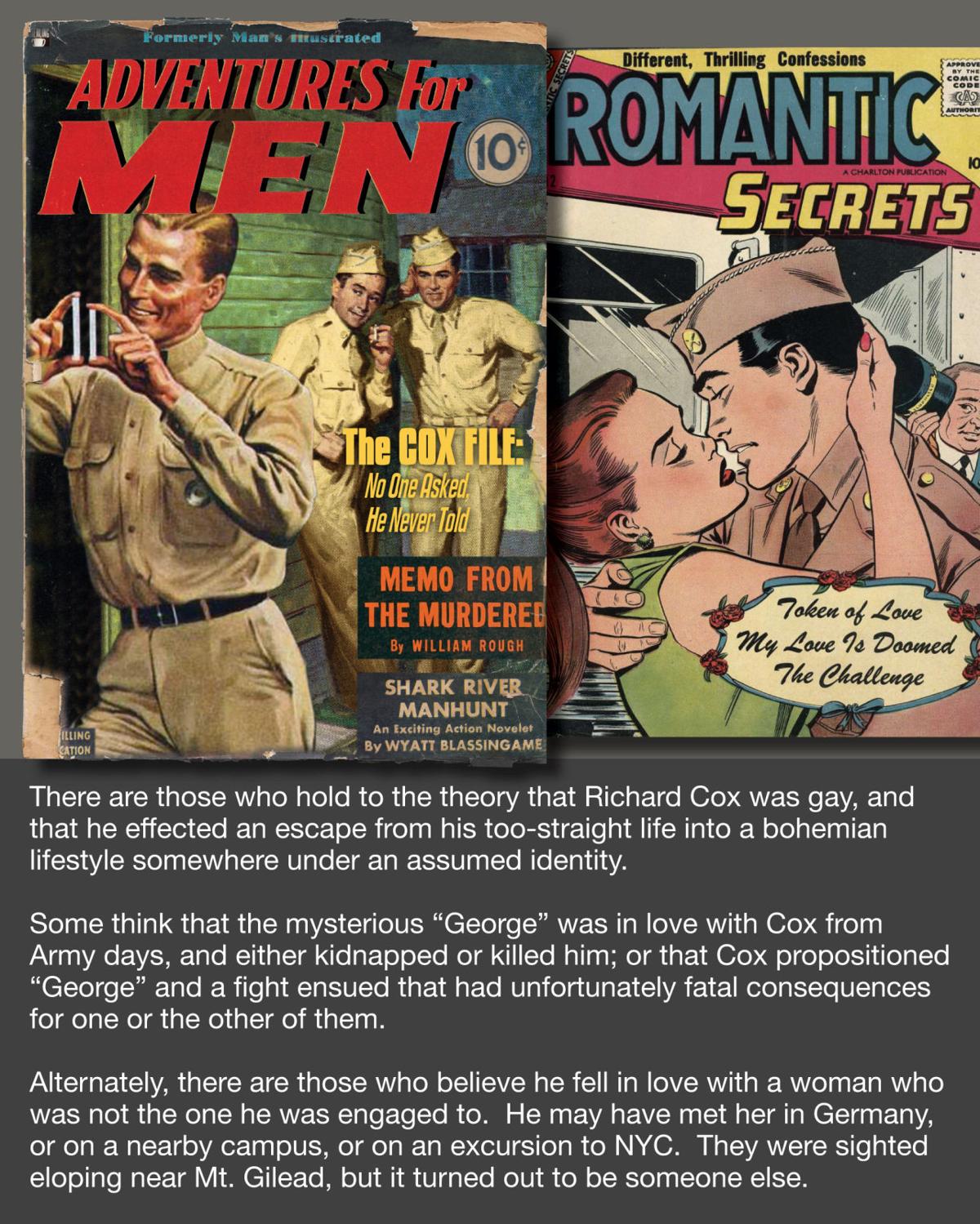 Some think he wanted to escape his pending marriage. 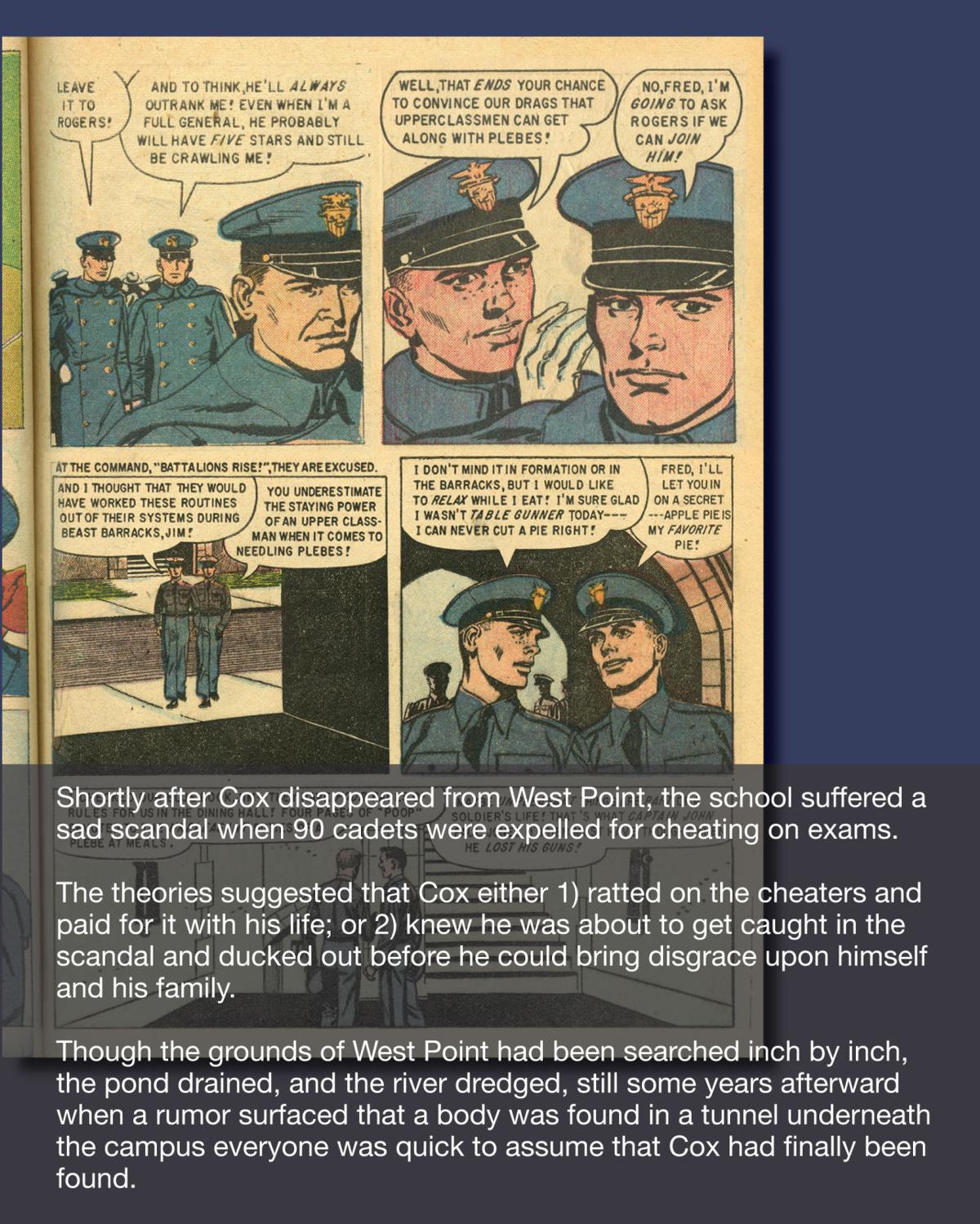 Some think the West Point cribbing scandal was responsible for his disappearance. 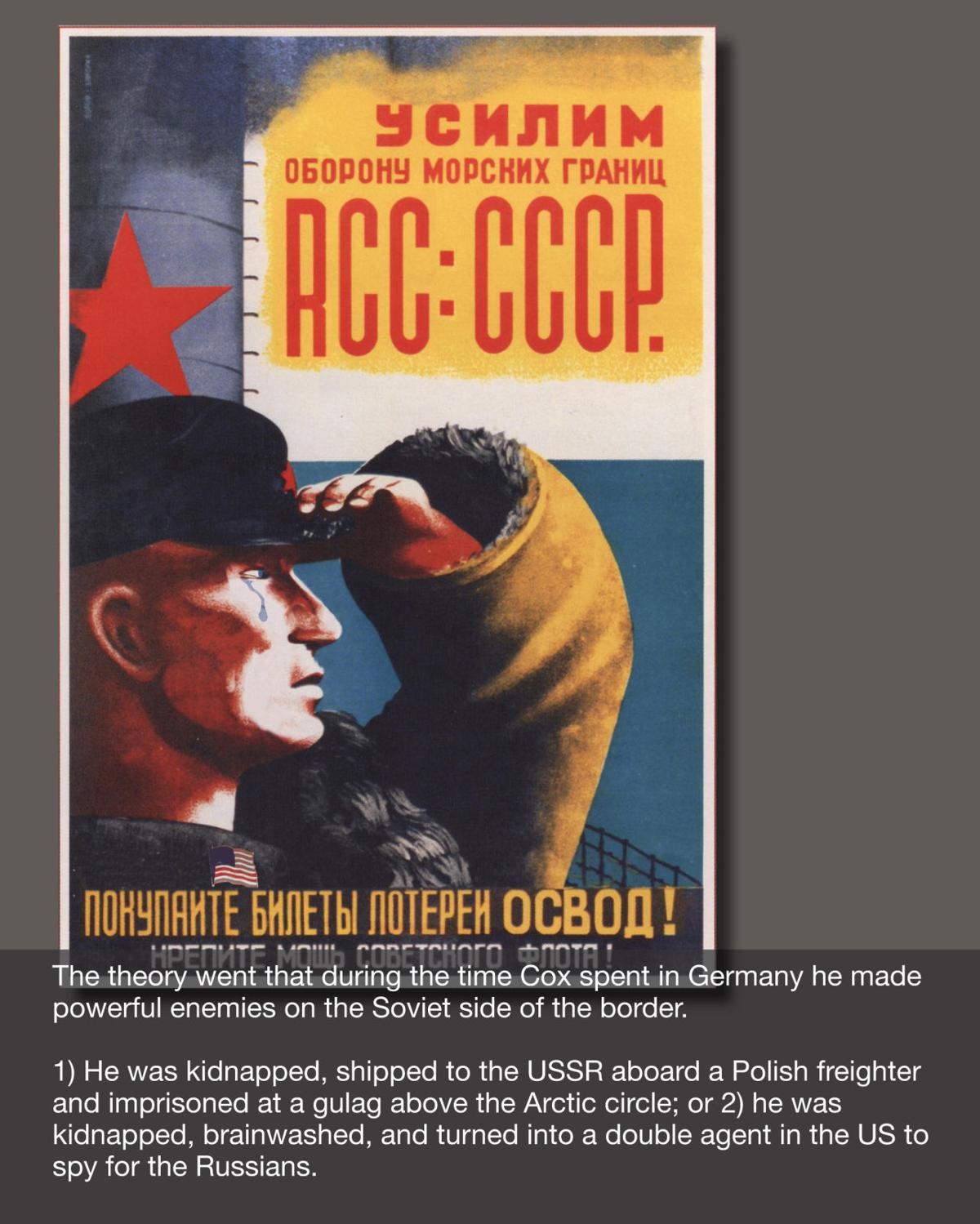 Some theorists consider the Communists responsible. 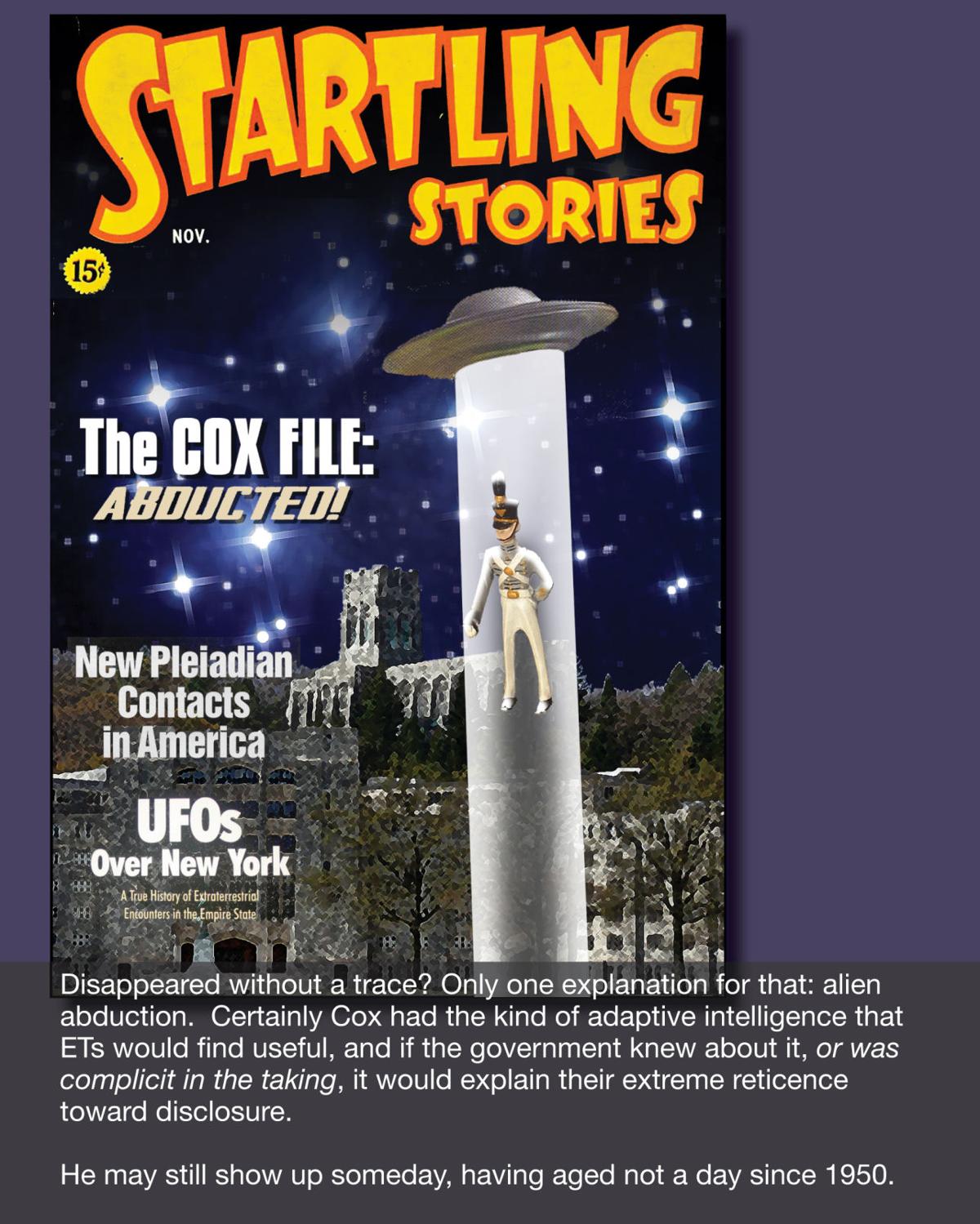 Some claim his disappearance can best be explained by alien abduction. 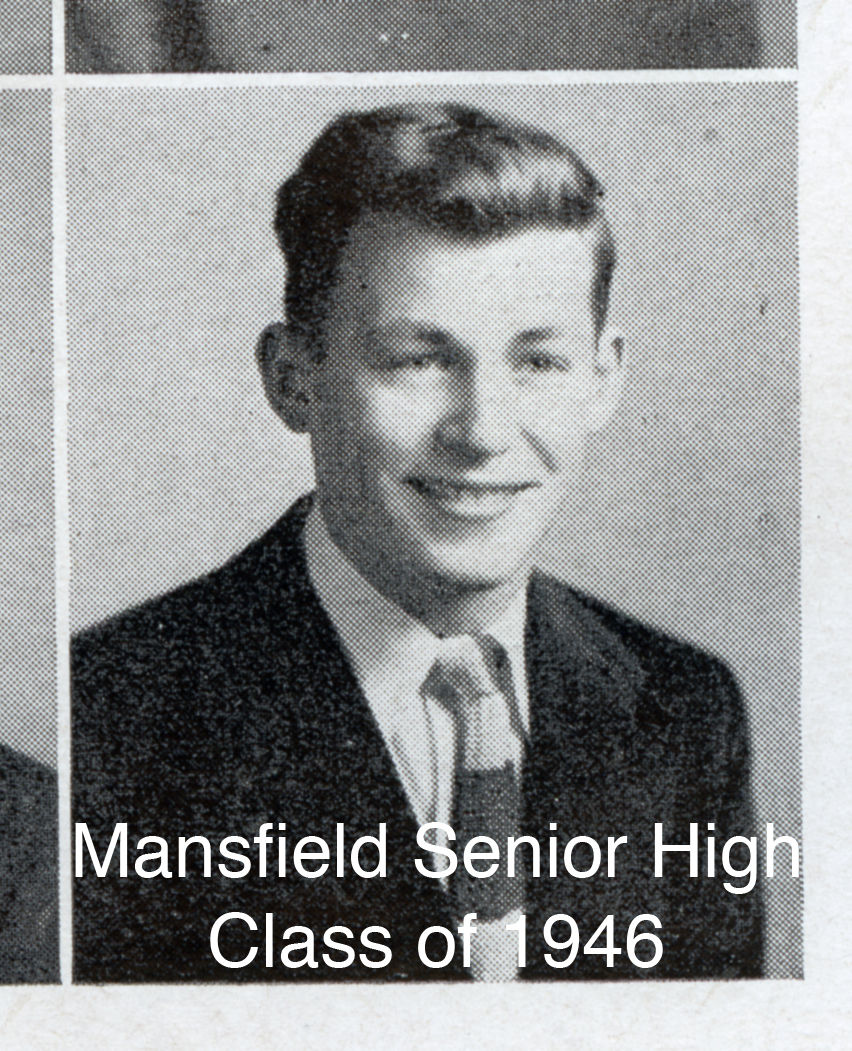 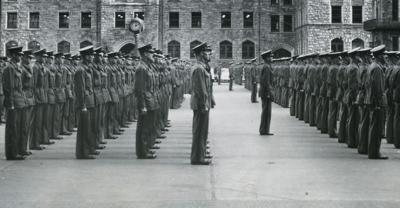 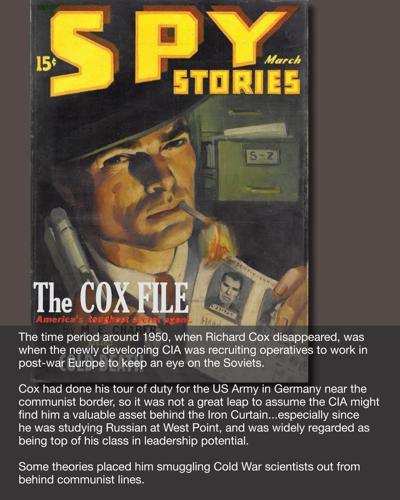 Some theories claim he became a spy during the Cold War.

Some theorize that he became a US spy in Cuba.

Many believe the key to his disappearance can be found in his US Army experiences.

Many assume he was murdered.

Some think he wanted to escape his pending marriage.

Some think the West Point cribbing scandal was responsible for his disappearance.

Some theorists consider the Communists responsible.

Some claim his disappearance can best be explained by alien abduction.

Editor's Note: This story was originally published on Richland Source in 2015. It is being republished on the 70th anniversary of the disappearance of Mansfield's Richard Cox, one of the most intriguing missing person's cases in United States history.

So if you are just walking in on this story let me bring you up to speed: a boy from Mansfield was a cadet at the U.S. Military Academy at West Point, signed out one evening to go to a restaurant on the grounds, and vanished into thin air.

He never signed back in, which triggered one of the biggest manhunts in U.S. history.

Look up the most famous missing persons cases of the 20th century and you find Amelia Earhart, Jimmy Hoffa, and Richard Colvin Cox of Mansfield, Ohio.

Dick Cox was born July 25, 1928. He grew up in Mansfield's Woodland neighborhood, graduated from Mansfield Senior, and earned an appointment to West Point.

He was last seen Jan. 14, 1950, when he was just 21 years old. No one really knows what happened to him after that night. Well, somebody knows and that’s what this is about.

During the first years of the Cox disappearance — while he would be presumed alive and absent-without-leave — the FBI, the CID, and the newly organized CIA, conducted an all-out nationwide search. Even after the seven-year deadline, when he could be officially declared dead, the investigation lived on.

Naturally a systematic fine-tooth dragnet like that incurred a ton of paperwork in a number of government divisions. For 15 years the agencies were quite secretive about their findings and theories, not only because they were pursuing delicate leads, but also because it was something of an embarrassment to them that after spending all that massive effort they still had nothing to show. Friends and family in Mansfield who wanted answers just got a runaround, and the Feds weren’t saying anything.

But in 1966 the rules changed when the Freedom of Information Act was instituted. Suddenly the Cox files were public property.

Within a couple decades of the Cox disappearance one of his Mansfield friends had become the Richland County Prosecutor, presumably with access to investigative reports. William F. McKee had been a schoolmate of Dick Cox, and the two of them had spent casual hours together both during and following their high school years.

In the law enforcement business McKee had proven himself coming up through the legal system, and he was well known and highly respected by the FBI. They had friendly, mutual cooperation on many cases of all levels — local and statewide. So when he was in the Ohio office of the FBI one day, and mentioned in an offhand manner to the Agent in Charge that he wanted to see the Cox file, he was hardly prepared for the response he got.

The Agent in Charge tried to play it off casually, but he visibly turned pale as his eyes darted around in desperation, scrambling for an excuse to stall the request. McKee was impressed…and he wasn’t too surprised when the files failed to materialize. This was about 1969.

About five years later Prosecutor McKee had occasion to send an assistant up to the FBI office for an extradition, and he asked the young attorney to speak with the Agent in Charge. “Tell him to get me the files on Dick Cox.”

Later the assistant reported that he had “never seen anything like it.” The FBI agent had been calm, professional, ordinary, until the young attorney brought up the Cox File. “Then he turned white and started shaking.” Needless to say McKee never did see the files, and it was clear enough that somebody up in the hierarchy knew something that they didn’t want to talk about.

A few years down the road in 1982 — after the whole process of obtaining secret files from the government had gone through the wringer of Watergate, the Pentagon Papers and other similar 1970s high profile national scandals involving obstruction of information — the procedure wasn’t so unusually difficult. An investigative reporter for the News Journal — presumably with the arm-twisting power of the press behind him — was finally able to land the files in Mansfield.

When the files arrived they were heavily censored with black-line redactions all over them, and missing 165 pages. It was a conspiracy-theorist’s bonanza.

There are some excellent published investigations on the Cox missing-persons case, the most incisive of which originated in Mansfield with the Jim Underwood/ Mansfield News Journal story of 1982. Theories of what became of him run an entire spectrum — officially and unofficially — from why he may have been murdered, to why the government wanted to hush up his alleged anti-communist secret spy activities. It is all fascinating material that could spawn several riveting episodes of the Twilight Zone.

If he died in 1950 when he disappeared, the story involves a relatively mundane sequence of forensic mysteries that narrow in significance as the years go by. But if he lived, it throws wide the doors of speculation and imagination.

Growing up in Mansfield, and having known and met many, many people through the years who knew Dick Cox, I have heard a lot of theories. I always ask folks what they believe happened to him. An enumeration of theories accompanies this article, in the form of 1950s-type tabloids, adventure magazines, comic books and other suitably appropriate fiction or non-fiction media.

Understandably, the possibility that Cox became a CIA operative is not something family and friends want to hear: it salves their broken hearts only to believe that he was killed and had no way to say goodbye.

Yet, we all can trust that if Dick went on to a secret life, he did so knowing the price to be paid by all who loved him.

If he was raised to love his country, if he was raised with values recognizing that in times of crisis the needs and survival of the nation take precedence over the emotions of one individual or one family or one community, then his metamorphosis from beloved family member into anonymous national servant should be seen as a valiant and noble sacrifice, and the suffering of his family and friends as simply the price of freedom.