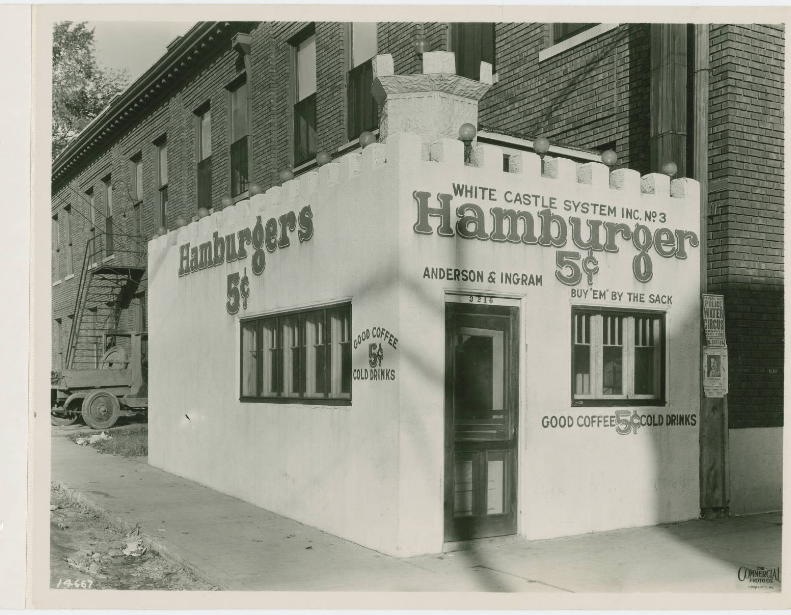 This is the exterior of an early White Castle in Kansas City, Missouri. 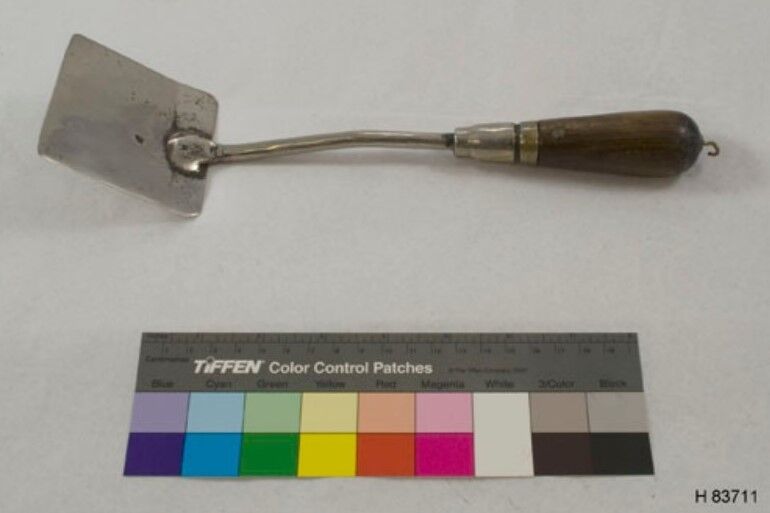 This is an original White Castle spatula.

When Walt Anderson and Billy Ingram opened the first White Castle restaurant in Wichita, Kansas, in 1921, hamburgers were not the quintessential American sandwich, and there were not chain restaurants selling hamburgers coast to coast.

As the company expanded east from Wichita to cities like St. Louis, Missouri, Chicago, Illinois, and Louisville, Kentucky, they encountered little competition as there were no other hamburger chains consistently serving 100% beef hamburgers cooked the same way at each location.

Though Anderson and Ingram may have enjoyed flying to their restaurants in the company airplane, it became necessary to move the company headquarters to a central location.

Where are the records that document this incredible story?

In 1995 the Ohio History Connection and White Castle formed a partnership to preserve their company history and make it accessible. The company transferred paper records, photographic materials, restaurant plans, advertising materials, company publications, and objects to be cataloged and stored long term at the History Connection.

The initial deposit of paper records consisted of boxes and volumes that occupy nearly a full range of shelves in Archives & Library storage. There have been several more transfers, including 45 boxes of photographs. The records came to the Ohio History Connection as they were organized by the company.

Our staff maintained that filing scheme because it is what archivists call the original order, and the company’s filing scheme makes sense. Over 600 museum objects are cataloged and stored at the museum collection facility, including the first spatula used by co-founder Walt Anderson to cook White Castle hamburgers.

What made the expansion of White Castle possible?

The company’s rapid expansion in the 1920s and 1930s was feasible due to a number of innovative business practices. As an early fast food chain, not all of the equipment they needed was available and they developed their own. The archives detail how White Castle created a paper hat worn by restaurant employees and formed a subsidiary, the Paperlynen Company, to produce them. Paperlynen even had its own custom hat folding machine.

To keep overhead costs low, the first restaurants were small buildings with five stools for customers. If a location was not profitable, it could be closed with a limited investment in the property. An employee had the idea in 1928 to construct pre-fabricated restaurants with steel frames and porcelain enamel paneled walls.

The restaurant designs, as documented by drawings and specifications in the archives, were based on the Old Water Tower in Chicago, Illinois. The beauty of the pre-fabricated restaurants was that they could be moved from location to location.

Records of another White Castle subsidiary, the Porcelain Steel Building Company, that was formed to build the restaurant buildings and other porcelain steel products are in the archives too. White Castle obtained patents related to the Paperlynen cap folding machine and the design and construction of porcelain steel buildings.

In the 1930s the company used inventive advertising techniques to attract new customers. A spokesperson who used the name Julia Joyce headed a campaign to appeal to women and convince them that White Castle hamburgers were appropriate for family dinners. The program even published menu books suggesting foods to serve with White Castle hamburgers.

Examples of the menu books and posters with slogans like “Give Mother the Night Off” are some of the more colorful pieces preserved in the archival collection. To facilitate carry out orders, White Castle developed their signature cardboard boxes for hamburgers to keep them warm and pack them in sacks.

In 1932 White Castle pioneered the use of coupons distributed in the newspaper. They kept records that tracked the success or failure of their coupon marketing campaigns until 1960. Marketing campaigns from 1960 onward increasingly focused on television commercials. When organizing a later transfer of materials, we found photographs of the late actress Carrie Fisher, also known as Princess Leia from Star Wars, on the set of a 1980s era White Castle commercial.

How did White Castle track so many restaurants?

In the archival collection are location/history files for each restaurant or Castle. The records are arranged in alphabetical order by name of the city where the Castle was or is located, then numerically within each city by Castle number. The files tell us when a Castle opened, the street address, type of building design, and when it was replaced, moved, or closed.

The photographs correspond to location/history files and contain photographs of most of the Castles organized by city and number. Long before it was possible to look for locations of Castles online, the company printed small, Castle-shaped booklets that listed the locations. There are 115 editions of the location booklet in the archives.

What can we learn about company managers and employees?

Archival collections do not include detailed personnel records as they often contain information that should not be publicly available. However, there are records in the archives that tell us about some of the people that have worked at White Castle and what it was like.

Cleanliness was important and employees, who were originally called operators, were given detailed instructions telling them how to dress for work. For years the restaurant operators were only men.

A selection of time books in the archives for Cincinnati employees dating from 1937 to 1952 show that during World War II the company began to hire female restaurant employees because of the number of men joining the armed forces.

Annual managers meetings are chronicled by meeting minutes and group photographs of those in attendance. Arranged in chronological order the minutes contain a history of corporate decision making. Photographs and company publications record many employee milestones and events, like employees’ anniversaries with the company, retirements and holiday parties.

Newsletters like the White Castle House Organ, published for internal and external distribution, the General Letter, printed for managers, and Homefront, written for staff at the Columbus headquarters, were used in the past to share information across the company. Today researchers can consult them for information about new hires, promotions, company benefits and company sports teams.

A unique publication in the archives is a 1926 issue of the Hot Hamburger, a newsletter that predates the others. Assistant Manager Jack White who worked in Kansas City contributed this poem that refers to the fact that White Castle hamburgers in 1926 cost just 5 cents.

Too small to buy vegetables.

Not large enough for the baker.

Hardly fit for the grocer.

But, believe me, when I go to a White Castle I am considered SOME MONEY.

How has White Castle continued to evolve?

In the 1940s rationing of food products put a strain on the company and restaurant expansion was limited during World War II. The 1950s brought competition in the form of new hamburger chains. When Billy Ingram retried to Florida in 1958, White Castle briefly opened a few locations in Miami.

They were closed in the 1960s because they were too far away from White Castle’s supply chains in the Midwest and Mid-Atlantic states. After hamburgers, coffee was White Castle’s second most popular product for many years.

Advertising posters even proclaimed the number of cups of coffee sold. French fries, the side dish most often associated with hamburgers, was not a permanent menu item at White Castle until 1959. The 1960s brought fish sandwiches during Lent and cheeseburgers to the menu.

White Castle has not continued to physically expand their restaurant chain beyond their established base of operations. Company representatives say they like the fact that going to a White Castle restaurant is a unique experience that is not available everywhere.

However, this does not mean that they stopped trying new ideas. White Castle introduced their line of frozen, microwave hamburgers through their subsidiary, White Castle Distributing, Inc. Now it is possible to get White Castle hamburgers in grocery stores all over the country even in you do not live near a restaurant.

White Castle has developed a cult-like following. In 2001 the company inducted the first group of White Castle super fans, known as Cravers, into the Cravers Hall of Fame. The Ohio History Connection was honored to host the Cravers in November 2010. White Castle was featured in the blockbuster film Saturday Night Fever in 1977.

Then in 2004 the entire plot of the movie Harold and Kumar Go to White Castle was about two friends driving to the restaurant to fulfill their cravings. Wedding parties have been known to visit White Castle restaurants. In 1991 they began taking reservations and providing table service on Valentine’s Day.

We have digitized a selection of the White Castle Archives that is available online in the Ohio Memory digital library. Here is a link to the White Castle Digital Collection. The Ohio History Connection and White Castle look forward to celebrating the company’s 100th anniversary this year and continuing our partnership for many more.