Despite the proliferation of movies such as “It’s A Wonderful Life,” which suggest otherwise, there isn’t an uptick in deaths by suicide during the festive time of year.

“Contrary to popular belief, depression and suicide rates do not rise around the holidays. The media often inaccurately reports such a link, and also tends to blame suicides during the holiday season on depression or anxiety directly related to the holidays,” Reed Richmond said, Health Educator for Richland Public Health, in an email.

“However, studies have shown that people tend to be less likely to commit suicide during the holiday season, perhaps because of an increase in available emotional support,” he added.

Richmond is correct. It’s a myth that people are more likely to attempt suicide during Christmas time, according to researchers.

Research has also shown that the holidays, with its social gatherings and general good will, which sometimes, isn’t extended at other times of the year, can actually serve as a buffer against suicidal thoughts.

While the holidays can be stressful for some, unfortunately, the “Holiday-Suicide  Myth” (as it   has become to be known among researchers),  has continued to persist, even years after being debunked by experts like the ones at the Centers For Disease Control and Prevention (CDC)  and  Dan Romer, a research director at the Annenberg Public Policy Center (APPC), at the University of Pennsylvania.

Since 1999, Romer has been analyzing the data that has been collected about newspapers (and other  media outlets) that have perpetuated the myth about the rise of suicides during the holiday season. He has further analyzed and written about his findings, over the past two decades, in hopes that the  media will, eventually, stop perpetuating the false-link between the holidays and suicidality.

In reality, November and December are the months with the lowest suicide rates, according to the CDC. Other than the month of February, which also has lower suicide rates (possibly because  as it has been suggested, it’s a shorter month), the rates tend to be lower during the winter months for a number of reasons including some people simply don’t have the energy due, in part,  to a decrease in sunlight, to follow through with plans to harm themselves, according to experts.

In fact, it’s the warmer months, such as May through August, that experts have noted they’ve seen an uptick in calls to suicide hotlines. The uptick typically starts around spring and peaks around fall.

In 2018, Richland County had one of it’s highest suicide rates on record in years, with 23 deaths, accoding to Joe Trolian, executive director of the Mental Health and Recovery Board Services.

“In 2019, we reduced that (to) nine, we then hit 16 in 2020 which (is) actually about average for Richland County, in the midst of Covid, was better (than), we were expecting. This year we have had eight suicides as of July 21,” Trolian reported in an email.

The CDC has defined suicide as: “death by injuring oneself with the intent to die” and it is the tenth leading cause of death in the U.S. It was responsible for more than 47,500 in 2019, which is  approximately 11 deaths per minute.

Furthermore, a suicide attempt is when someone harms themselves with  any intent to end their life, but they do not die as a result of their actions, according to the CDC.

Death by suicide happens across many demographics in the U.S. (and globally). The suicide rates also vary by age, sex and race, however, some groups (i.e. white and American Indian men)  have higher rates than others). In media portrayals, it’s often the George Bailey’s of  “It’s A Wonderful Life” of the world. It’s also a myth that African-Americans don’t attempt suicide that often.

Rates are actually on the increase among African-American males and Blacks, in general during the pandemic.

“This is difficult to track, because there is not a good database to track how many attempts are made but do not result in a completed suicide,” he said.

“However men  have a tendency  to use more lethally violent means (i.e. firearms, hanging) where women are more likely to overdose on medication or asphyxiation from carbon  monoxide. Dealing with different genders is always a critical part of addressing suicidal thoughts or ideation,” he added.

Trolian also noted (while elaborating that he was speaking in stereotypes), that women tend to be more vocal and willing to delve into feelings and talk through what is impacting the desire to end one's life, where men tend to shut down and exhibit less willingness to talk.

“However, discussing suicidality with both is crucial and acknowledging that when you are talking with someone, they are hearing even if they are not responding. It can be frustrating in a society that thrives on feedback,” he ended.

While some experts believe the pandemic isn’t necessarily a reason for a rise in suicide rates,  however, many have cited that since the pandemic stressors such as unemployment, quarantine ( and the isolation being away from people), for months at a time, have contributed to several of the risk factors for suicidal ideation.

Additional risk factors for suicidal ideation include substance abuse (regardless of the age or  demographic), mental health issues including depression, as well as childhood trauma or sexual violence. Additionally, a family history of violence or having a family member who has died by suicide.

“We have had this year, two teen suicides and one age 21, which is unusual for Richland County,” Reed explained in another email. “Over the last 20 years, we have averaged 15 suicides a year and most of the suicides have been males in the 50-70 age group,” he concluded.

Further data from the Vital Statistics Section of the November 2021 Health Report published by RPH showed: there  have been 10 deaths by suicide in Richland County year-to-date including one in September. The deceased ranged in age from 14-78. Several of the deaths by suicide took place at home while one happened at a correctional facility. The majority of the deaths were males.

One other item to note, Reed explained, “Is that deaths by drug overdose have dramatically increased since 2015, unless someone leaves a note claiming a suicide attempt, a death by drug overdose will be ruled accidental,” he said. 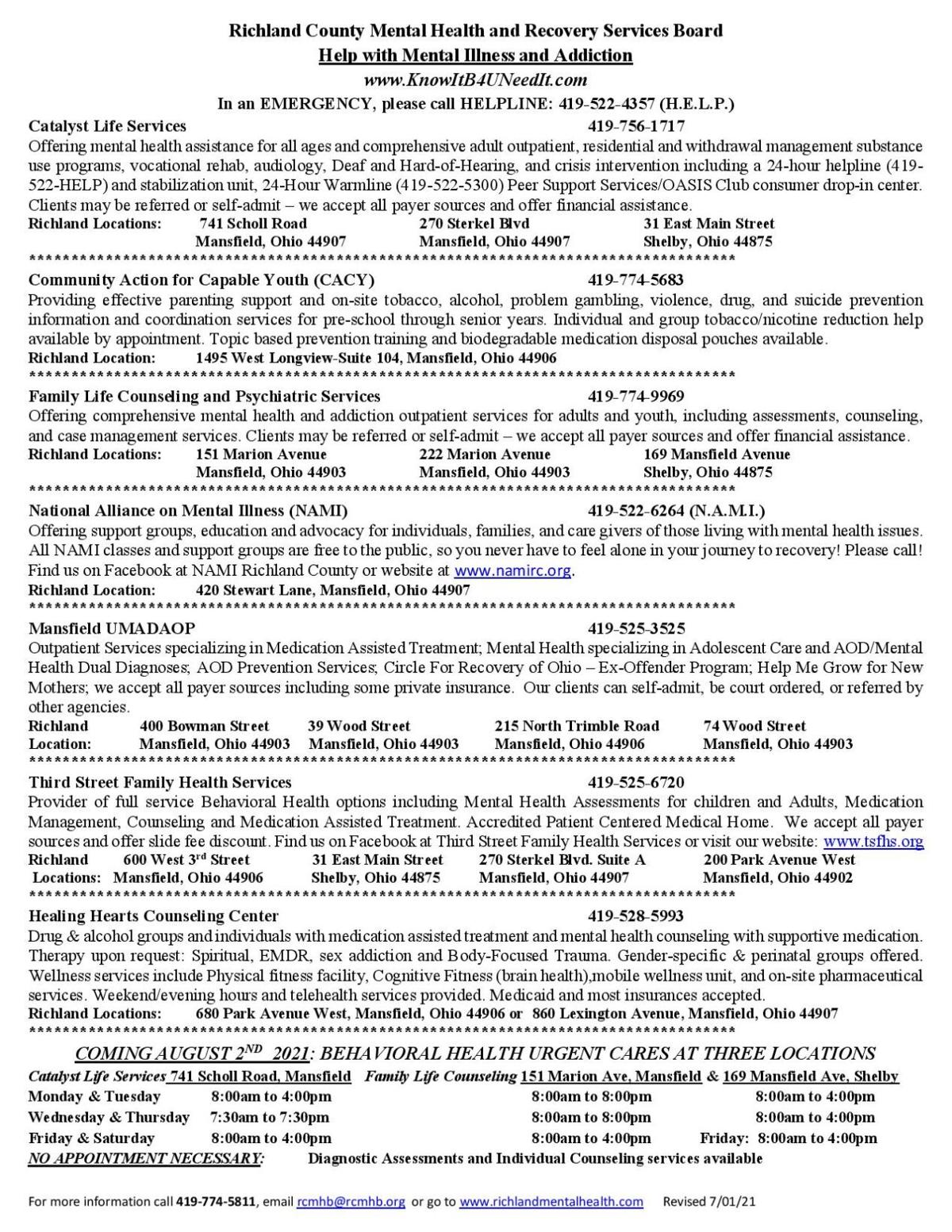 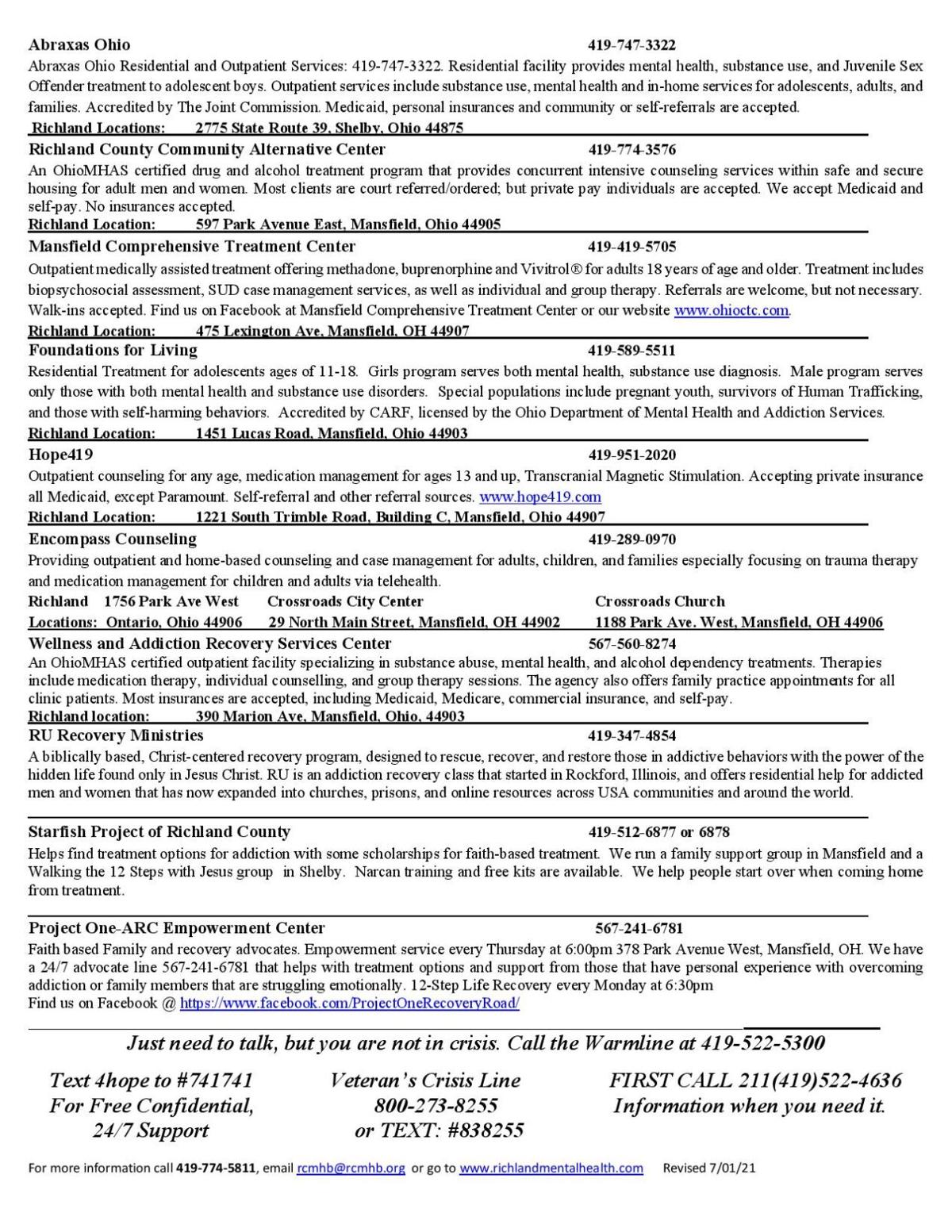 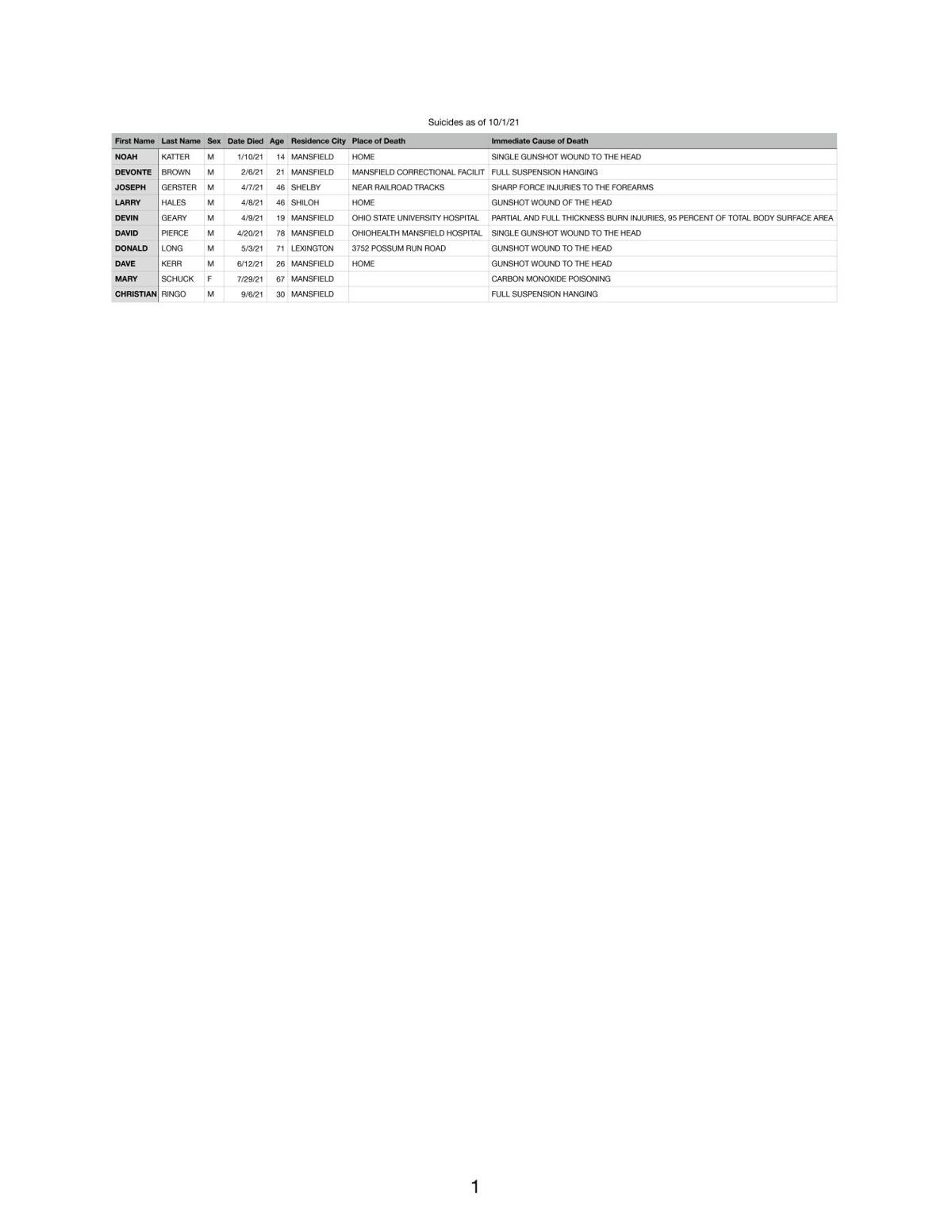 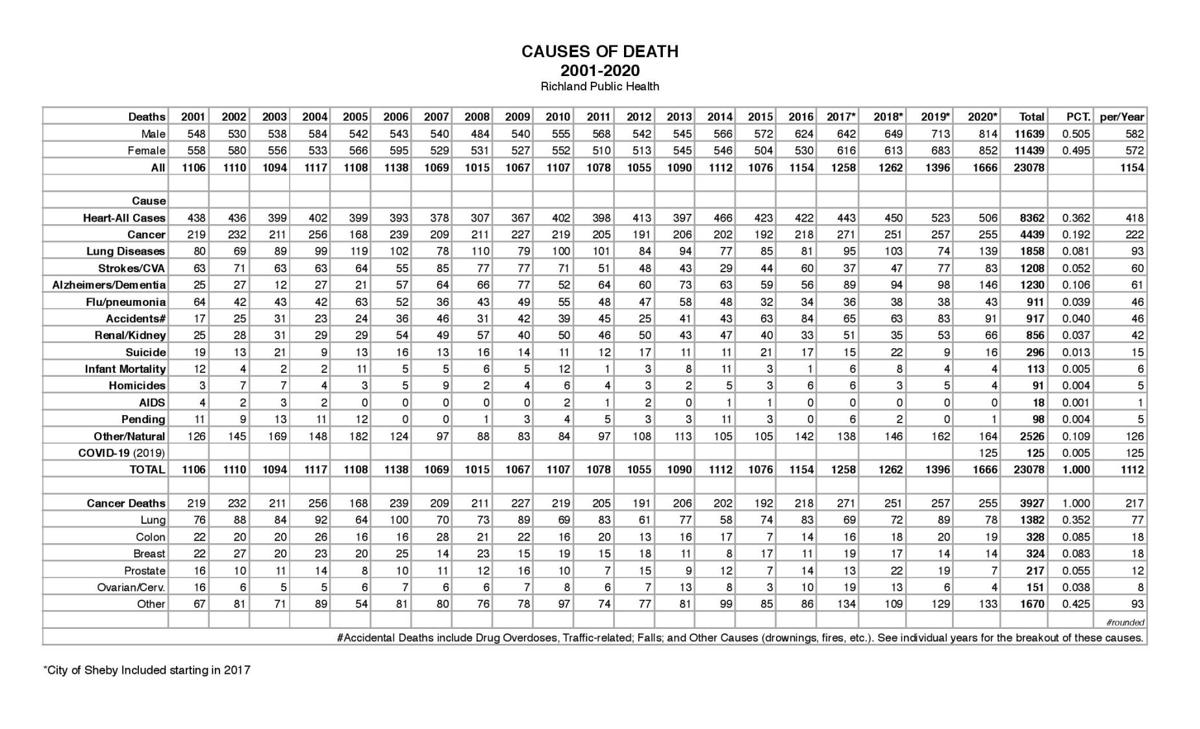 So why does the holiday-suicide myth persist?

In an article entitled, “Why The Holiday-Suicide Myth is Dangerous,” written by Leah Campbell in 2019, for Healthline Health News, she explored and uncovered some of the reasons why some of the myths surrounding suicidality often go unccorected?

While interviewing Dr. April Foreman, a PhD and Suicidologist, Campbell discovered some of the possible origins of the holiday-suicide myth in addition to why it often gets misattributed in newspapers and other news sources.

Campbell reported that the myth, may in part, have originated  from the  beloved 1946 holiday classic, “It’s A Wonderful Life,'' starring the late actor Jimmy Stewart as George Bailey, a businessman, who ponders ending it all, until he receives divine intervention from an angel named Clarence, and other such tropes.

The movie is usually shown around Christmas time and has been a favorite for decades.

Foreman, who is also a co-founder of Suicide Prevention And Social Media, pointed out that while “there is no one scientific reason for why people  (would) automatically assume suicide rates go up over the holiday,” stories like “It’s A Wonderful Life,”  have been being told for decades. And the real problem, she sees, with the movies (and similar tropes like it ) is that it doesn’t accurately portray what suicide and suicidality looks like in real life, she said.

Many of these feel good movies from “It’s A Wonderful Life” to more modern iterations of themes about time travel, where a beautiful or charming character goes back in time or to a former place in order to change a certain life-altering event, or to see what their life would be like, if they’d made a different choice or never existed at all, more often than not, has a happy ending.

However, those, who have ever had to deal with or is living with the grief of losing a loved one, who  has died by suicide (around the holidays or not), know it’s far more serious and complex issue than the anecdotal narratives present.

Romer would like to see more media outlets focus on creating more accurate articles about suicide awareness and prevention around the holidays, so people, who are feeling suicidal can get the help they need, regardless of the time of year.

Lately, i.e. 2018-2091, Romer, who has released the data he’s compiled about the prevalence of the suicide myth for the past 20 years (in news releases) and help to create guidelines for Journalists who report on the subject at: http://www.suicide.org has, fortunately, has seen a turn about in the reporting and has seen an increase in the number of newspapers debunking the myth since the 2016-2017 holiday season.

Nearly two-thirds of newspaper stories or 65 % of the articles, back then, had linked the holidays and an increase in suicide.

Romer has also warned journalists to be careful about the narratives they put out because of the possible contagion effect. It’s an effect where people believe that trends in suicide are up over the holidays because they saw it reported in their local newspaper. According to Reporting on Suicide.Org, over 100 studies worldwide have found that the risk of contagion is real and responsible reporting can reduce the risk of additional suicides.

Conversely, experts also advise against miminizing the notion that suicide attempts don’t ever occur over the holidays, even though, the rates are lower, they do happen.

So, in addition to being  more sensitive about stories media sources put out. Experts also advise everyone to be able to recognize the warning signs of suicide as well as for people to get comfortable with being able to talk about suicide. In addition to getting comfortable with being able to ask the uncomfortable questions about suicide. For instance, asking a loved one if he or she is experiencing suicidal thoughts?

Tessa Bianchi, a Licensed  Professional Clinical Counselor with New Directions and Student Life at OSU-Mansfield, has advice for people who are concerned that talking about suicide or asking questions about suicidal thoughts will put the thought in a person’s head.

“(No), it won’t,” said Bianchi, who provides counseling as well as educational workshops and presentations for students at OSU-Mansfield and North Central State College campuses and has a solid relationship with NAMI on Campus, which prioritizes student’s mental health

There are also other local resources available that can help.

“When we are addressing suicidality people just need to get help,'' cited Trolian.

“The attached pager is a great start. All agencies have a variety of clinicians and after a diagnostic assessment is completed, the assessor will try to match the individual  with the right clinician. However, we encourage people to access help as soon as possible if they are feeling suicidal,” he wrote.

“We have established two agencies (Catalyst Life Services  and Family Life Counseling) that are running Behavioral Health Urgent Cares. These allow access to services Monday through Saturday and many evening hours without an appointment. If a person is need they just have to walk in,” he added.

If you or someone you know is in crisis, please contact the National Suicide Prevention Hotline  at 1-800- 273-8255 or one of the local resources listed in the one pager.