SHELBY — Megan Owen is a healthy, thriving, 18-year-old from Shelby. It was only recently though, that she began to feel this way.

When she was 15-months-old, Owen’s mother switched her from breast milk to regular milk. She started to get very sick and lost weight.

The doctors thought it was just a cold, but she wasn’t getting better. Finally, they decided to run some tests.

The results troubled the doctors; it looked as though Owen had cystic fibrosis. They decided to do a sweat test, which measures the concentration of salt in a person’s sweat. 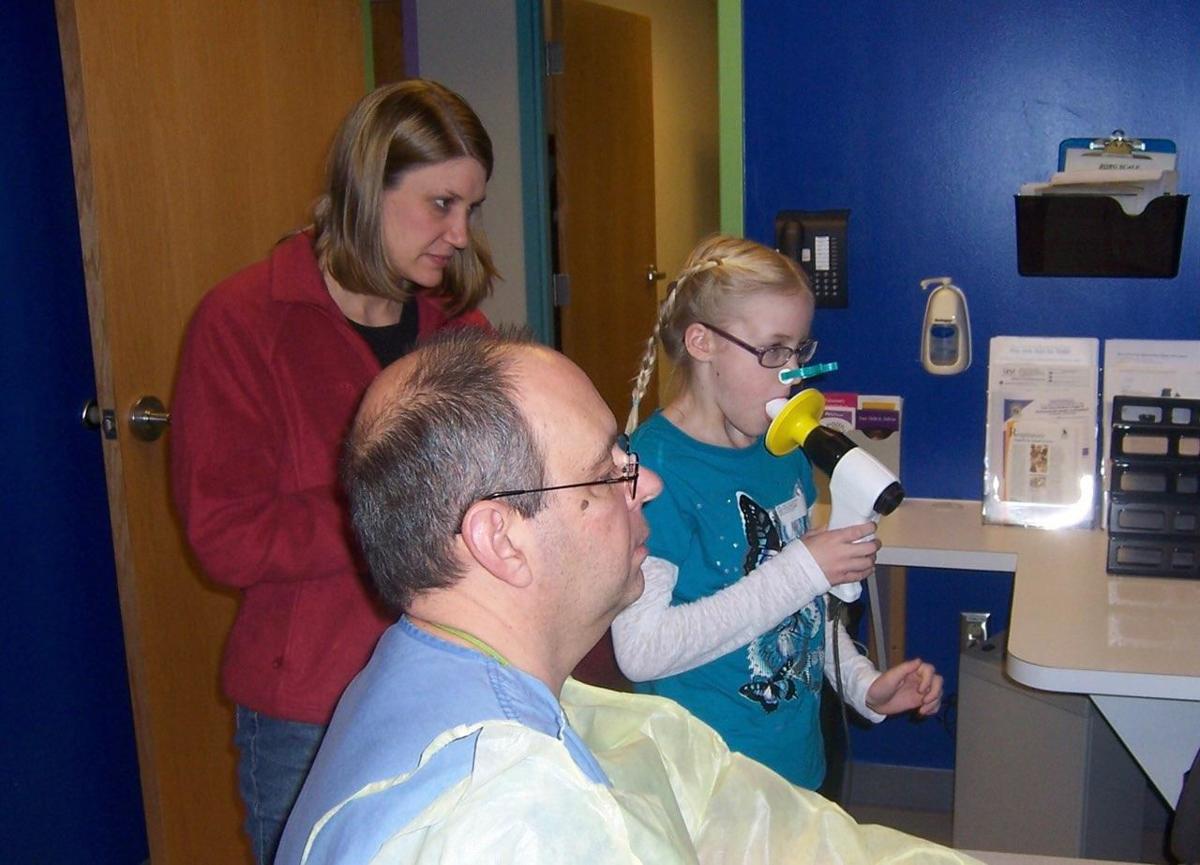 Megan Owen has spent most of her life in hospitals and around doctors and physical therapists; she has formed close bonds with many of them. Here, she is taking a pulmonary function test in order to observe the efficiency of her lungs. 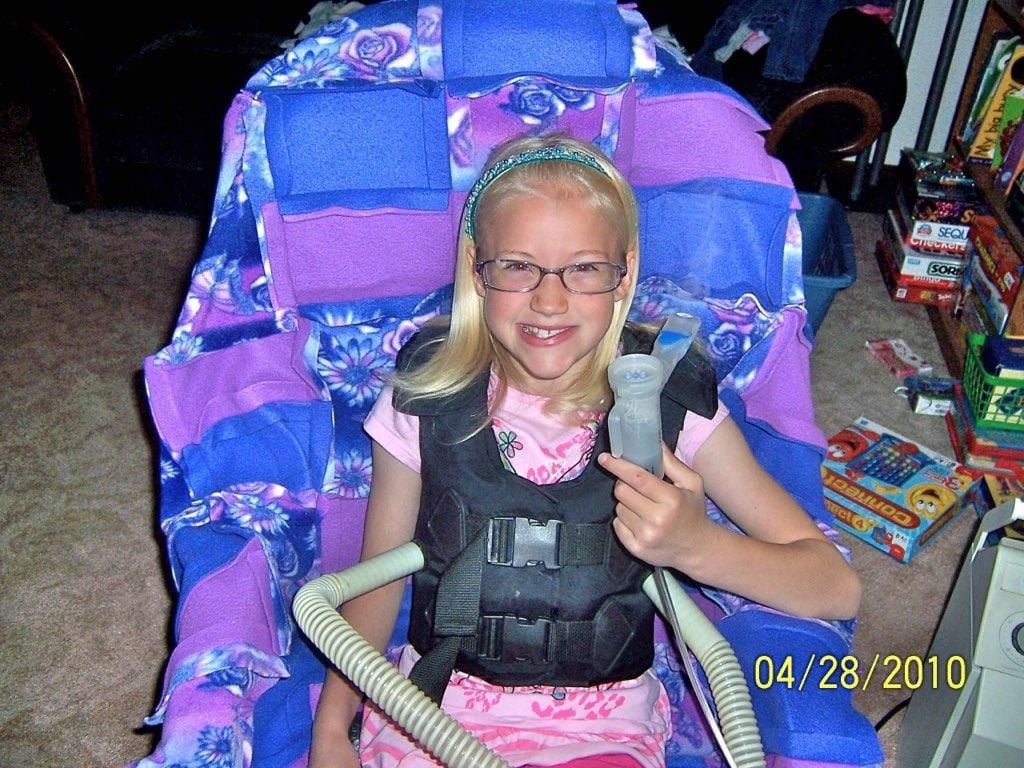 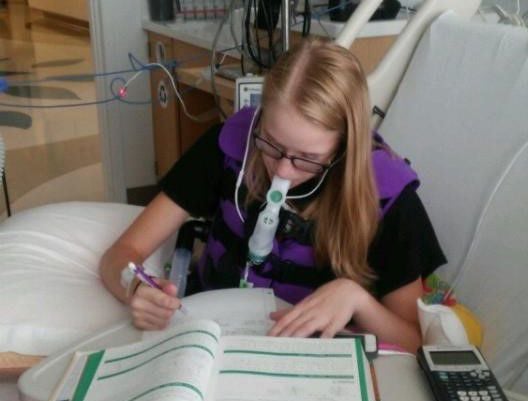 NCSC student, Megan Owen, was diagnosed with cystic fibrosis at a young age. Owen has done chest therapy throughout her life until recently.

Megan Owen's past with cystic fibrosis

Megan Owen has spent most of her life in hospitals and around doctors and physical therapists; she has formed close bonds with many of them. Here, she is taking a pulmonary function test in order to observe the efficiency of her lungs.

NCSC student, Megan Owen, was diagnosed with cystic fibrosis at a young age. Owen has done chest therapy throughout her life until recently.

This painless medical test is considered the “gold standard” when it comes to diagnosing cystic fibrosis (CF). The chlorine level of the sweat determines the diagnosis.

Those who fall in the middle range, “don’t show symptoms, but still carry the gene,” according to Owen. This is where both of her parents are. It was a complete shock; they had no idea they were carriers when Owen first showed symptoms of the recessive disorder back in 2001.

According to the Cystic Fibrosis Foundation Patient Registry, over 30,000 people are living with CF in the United States, and approximately 1,000 new cases of CF are diagnosed each year.

The projected life expectancy for someone with CF is 41 years.

Karen McCoy, M.D. and chief of the Pulmonary Medicine department at Nationwide Children's Hospital in Columbus, said that "in order to combat this illness on a day to day basis for our patients, we ask them to do an incredible amount of work. Amounting in sum to over 3 or 4 hours of actual therapy during the course of a day."

Even though Owen doesn’t find herself in any of these categories, CF has still affected her life in a major way. She has faced CF with courage, tenacity and grace, so much so that she was one of the 10 local students recognized for their courage by the McGowan Courage Award.

“My whole life, when I would get sick, I would be put in the hospital. How my doctors would describe it was (that) it was just a ‘Band-Aid.’ It wouldn’t stop the production of the mucus, it would just help (the symptoms). So I would get better, and then when my mucus would build up again, I would get sick again and it was a constant circle.”

Owen always had a strong relationship with the Lord, but cystic fibrosis made her doubt. She wondered how she was going to help change other peoples’ lives when she was trapped in a hospital bed.

Although she questioned why God would allow her to have CF, she kept her favorite Bible verse in mind - Romans 8:18, which states, "yet what we suffer now is nothing compared to the glory he will reveal to us later."

Then, in October of 2019, the FDA released a new drug called Trikafta. On Dec. 12, Owen started the medication.

She figured it was just another Band-Aid, like all of the other medications she had taken before. Although she felt better, she didn’t notice any major changes.

At her next monthly check up, Owen’s doctors used a pulmonary function test to see how well her lungs were working. A normal person reads around 100.

“My lung function went from 65 to 105 in a month. That never would have happened on antibiotics, never. I also gained 4 pounds in a month.”

She wanted to test her sodium again. This time Owen scored a 33 on the sweat test.

“So basically, I’m in a carrier state. I no longer have the symptoms of CF, but I still carry the gene.”

Owen said this was the point when she realized that this new drug was the real deal. She takes two pills in the morning and one at night, and although it isn’t a cure, it has helped Owen tremendously.

"[Trikafta] is in a class of medicines that we call cystic fibrosis transmembrane regulator (CFTR) modulators. That CFTR, that we all have and need to be healthy, is broken in people who have CF," Dr. McCoy said.

Furthermore, McCoy said that "when we introduce this type of a modulator, it is able to make the protein that constitutes the CFTR channel behave normally, more like people without CF. When we start using this drug, it's so highly effective at correcting the abnormality in the CFTR that within hours people start to feel better."

After about a month of taking the new drug, McCoy said many CF patients do not cough anymore or rarely do.

"This particular drug will ultimately work for about 90 percent of people who have CF. It is uniformly amazing medicine," McCoy said.

Although Owen has only used Trikafta for a few months, she said her doctors aren't describing it as a Band-Aid -- rather, it is literally stopping the production of mucus.

At her next appointment in March, Owen said her doctors plan to start taking her off of some of her medication, such as aerosols, which she no longer needs.

Owen had to have a feeding tube inserted which would give her body the extra nutrients it needed. She has had it ever since, but hopes to get that removed soon, too.

“They said if I am 121 pounds, then I can have it taken out. Right now I’m at 118. My mom said, ‘you’re going to be wearing bikinis this summer,’ I never thought she would say that,” Owen said giggling.

Dr. McCoy cautions those with CF that have reacted positively to Trikafta, not to stop any of their other treatments.

"We will carefully remove things that are burdensome to you, one at a time, so that we can get you to the point where your life is not so centered around being ill, it's more about being well," McCoy said.

Today, Owen is a thriving freshman at NCSC and was just hired at The Waterford at Mansfield, a senior living community. Owen has a heart to serve others and feels that is what God has called her to do.

She also recently applied to the nursing program at NCSC. Once she receives her nursing degree, she hopes to work with life-flight or as a trauma nurse for a large hospital like OhioHealth Riverside Methodist Hospital.

Her English teacher from Pioneer Career & Technology Center, Lindsay Neumann, said that "despite missing class due to her CF illness, Megan never missed an assignment or an opportunity to grow. Rather, Megan utilized her strong work ethic and her compassion to be an exceptional example of how a person will not be defined or limited to conditions that they cannot control."

Neumann also mentions that having Owen as a student of hers has been a blessing and that "the improvements of Megan's new treatments are encouraging as she continues to grow strong and inspire those she meets."

For those who are facing difficult times, Owen reminds them that there is always something good to come out of it and that God will never give us more than we can bear.