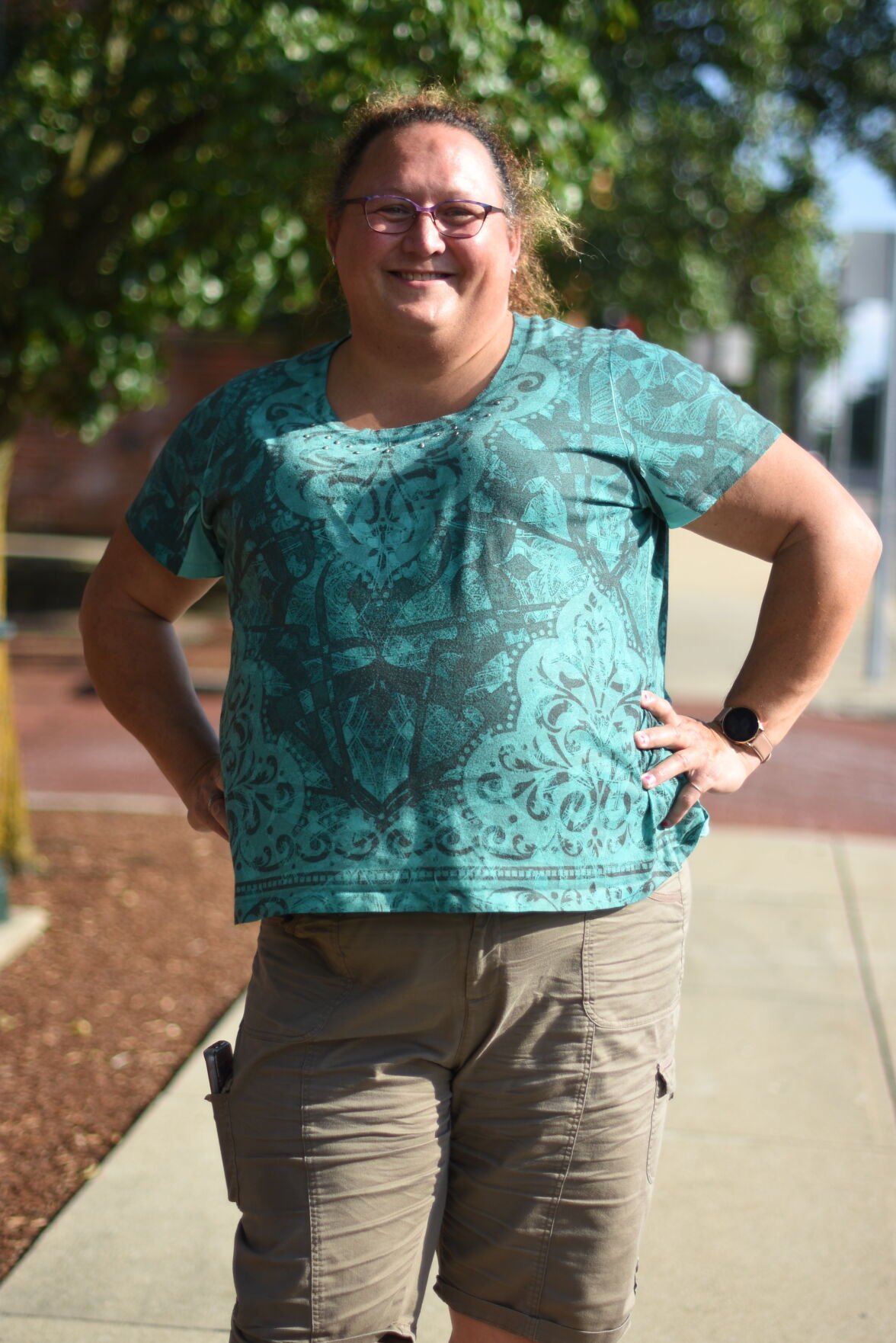 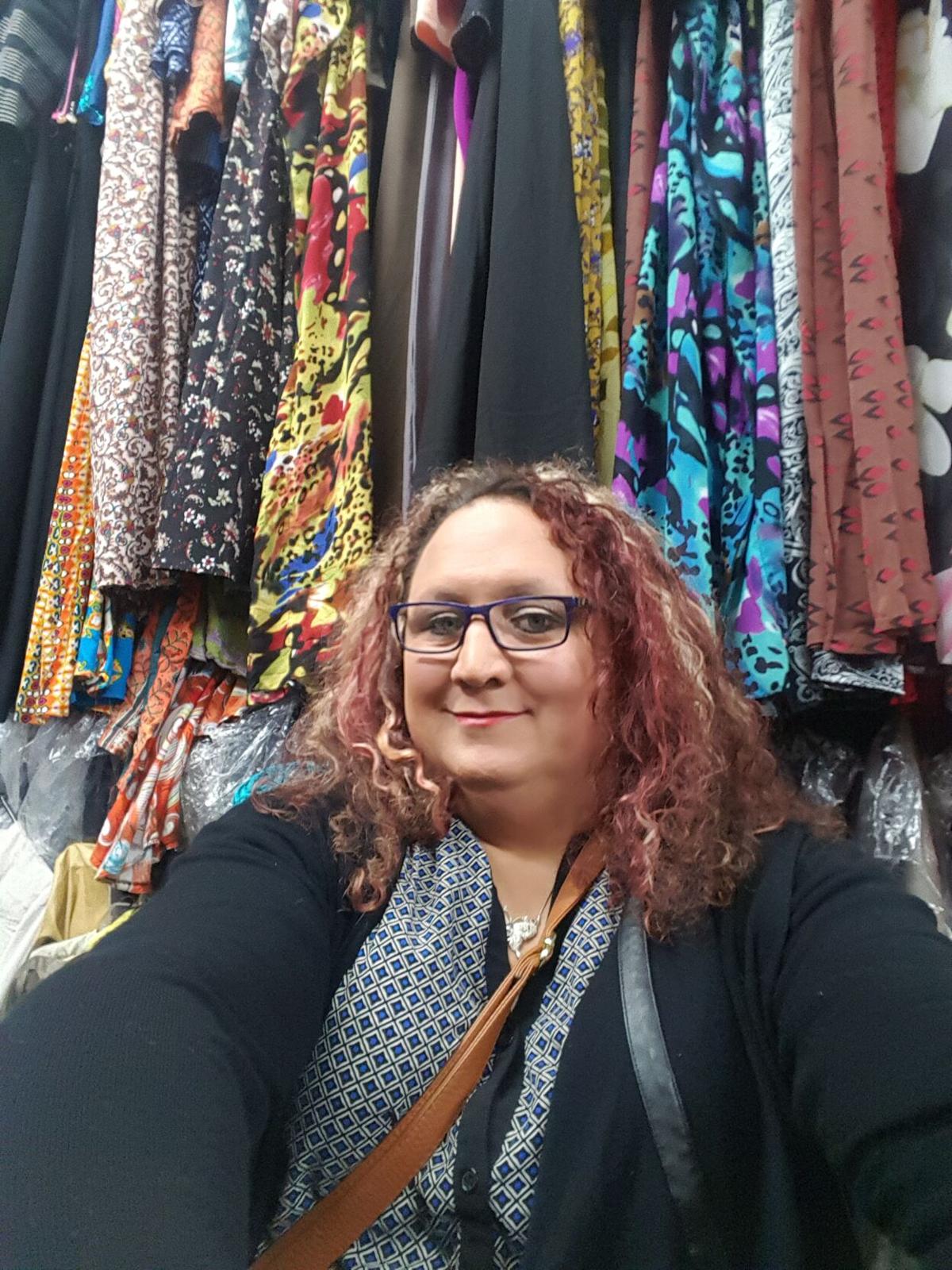 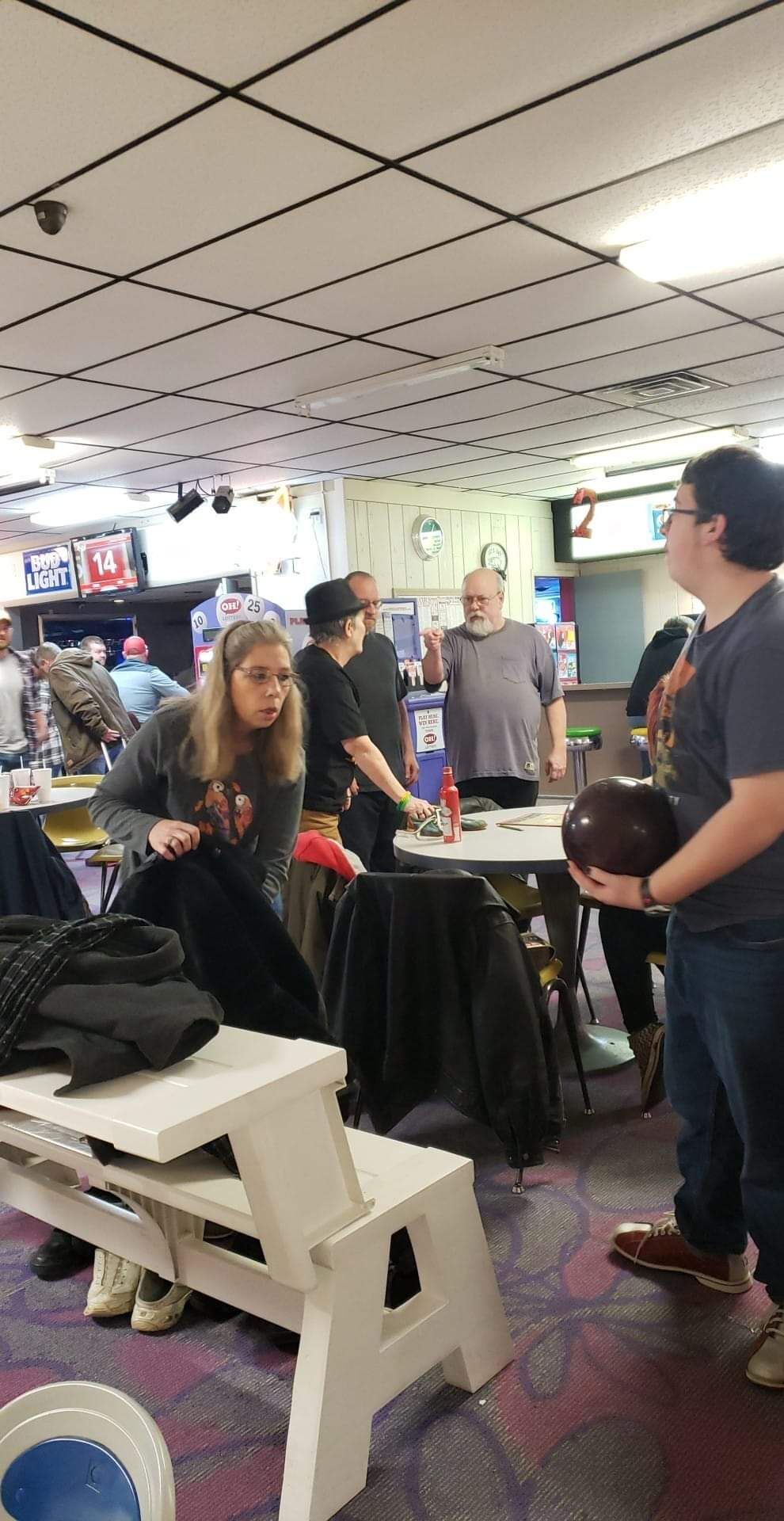 Bowling night was a big hit with the Acts 8 group before the pandemic arrived. 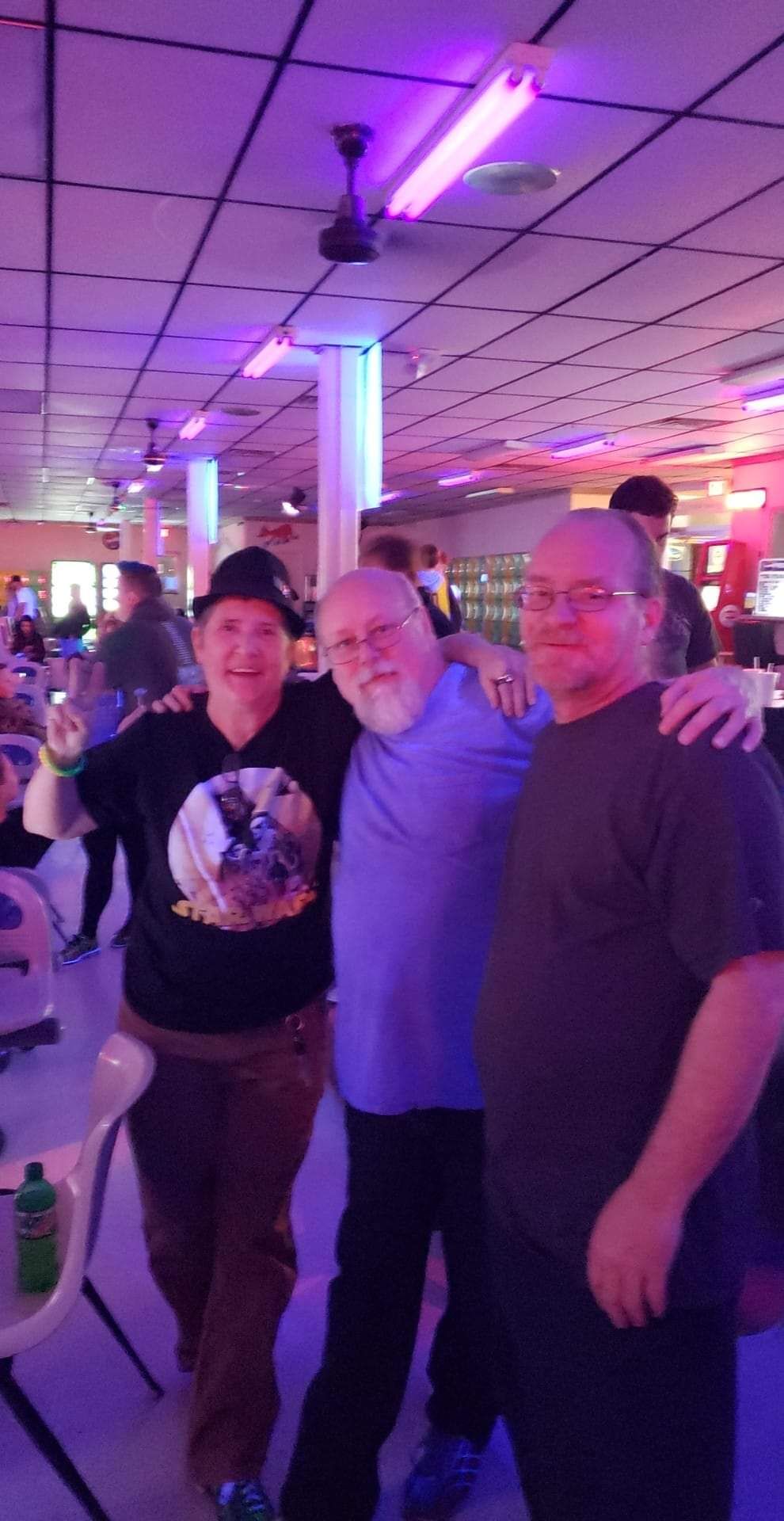 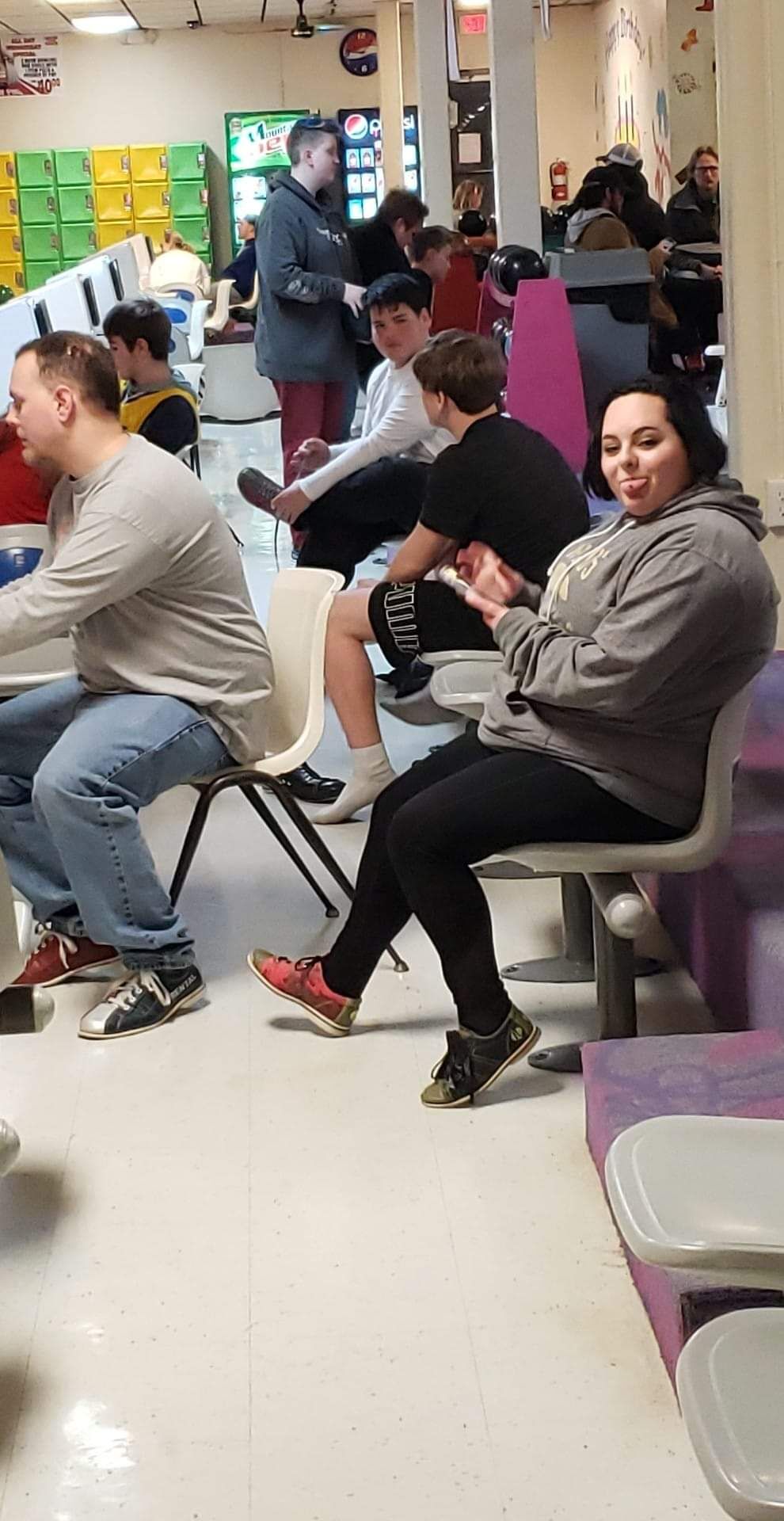 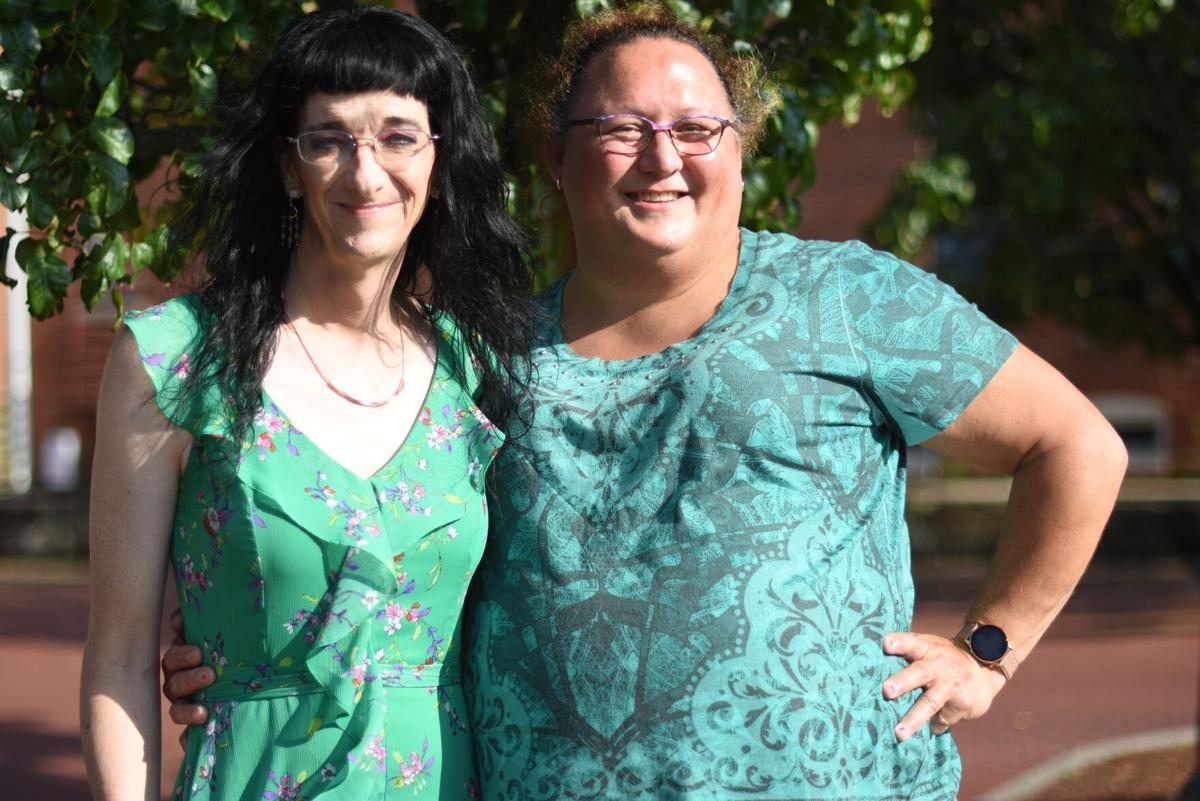 Sheila Matthews (left) and Kelli Quail (right) met in 2019 at the very first Transgender Day of Visibility event held in Mansfield. They both serve on the Mansfield Gay Pride Association. 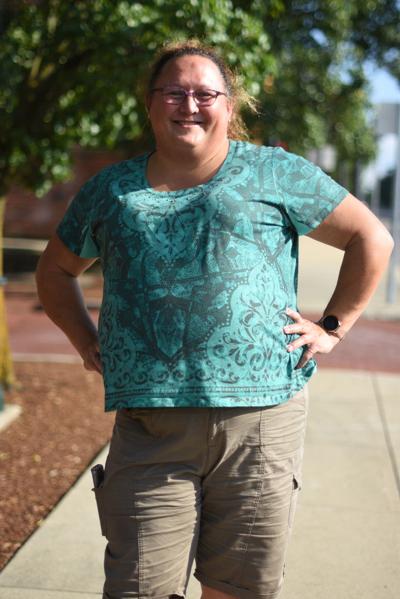 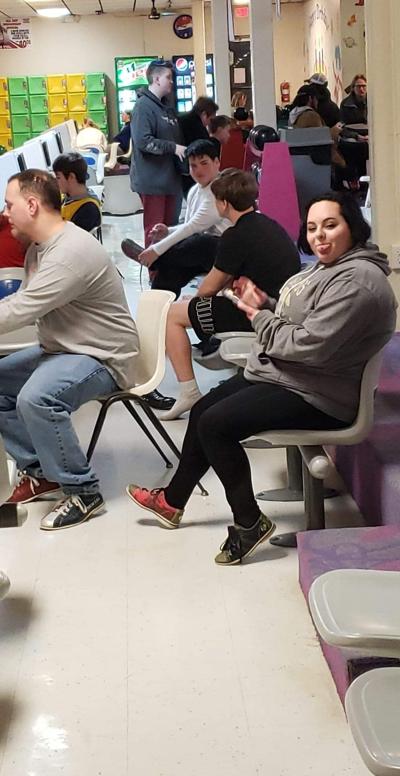 EDITOR'S NOTE: This story is Part III of an ongoing series about LGBTQ people and their allies in local religious communities. Part I featured Episcopalian priests from Mansfield and Ashland offering an inclusive message to LGBTQ people who have been hurt by religious rejection. Part II featured Nancy Shimer, a morah from Mansfield's Emanuel Jacob Congregation, sharing about her conversion to Judaism and her same-sex marriage.

SHELBY – In 2014, Kelli Quail seemed to be at the pinnacle of her work as a pastor. Following years of preaching the message of Jesus to inmates and serving as an associate pastor, she finally had her own congregation, and attendance at the church had more than doubled since her arrival.

But that October, Quail came to a life-altering realization. Despite wholeheartedly believing God would eventually “take it away,” and a lifetime of praying to change who she was, she was still transgender.

“I started praying really hard because nothing was making sense—because there was no horizon left for me to cross. I had done everything that I thought God needed me to do,” Quail said. “I just felt him say, in my soul, ‘No, I’m not taking this from you. I created you. Trust me.’”

Instead of feeling relief, Quail panicked. Despite knowing she was a woman from the time she was 6, long before knowing the word “transgender,” she had never planned on telling a soul. “I saw how people treated people that were like me, and I (thought), I don't want to be treated like that,” she said.

The prospect of sharing her gender identity at that point felt unbearable to Quail. She was married with five children and led an evangelical Christian congregation. It seemed inevitable she would face severe rejection and lose people she had loved all her life.

Over 40 years ago, the first—and only—reaction she had received to revealing her gender identity was negative.

“I put on my mom’s clothes and her makeup, and I’d look in the mirror (thinking), ‘this makes sense. I’m a girl,’” she said. “My mom didn’t react well, and it began a process of warning me that this needs to be buried. ‘We don't talk about it. It's bad. It's ugly. It's evil.’”

“This was 1977. There was no literature or education, especially in Bucyrus, Ohio, where I was born and raised.”

In her family’s church, Quail was taught that living as an openly LGBTQ person would be directly at odds with scripture and church doctrine. She loved her church and believed with enough effort, she could become a person the church would love, too.

“I knew that my faith was real,” Quail said. “So, I spent my whole Christian life working to be good enough.”

Not only did Quail continue to attend the church, but she also wanted to share her faith with others. She received her ministry certificate from Mount Vernon Nazarene University’s adult education program and began working in the ministry.

Until her realization in late 2014, she had quietly conformed, certain she would eventually no longer have anything to hide. Over the following months, she faced a silent, internal struggle, including recurring nightmares two or three times weekly.

“In the nightmare, I would confess who I was and what I was, and everyone that I loved would be in front of me, and they would all leave one by one. As they left, the light would turn out over them, and it would get darker and darker until the last person that I cared so much about would leave, and I would be left alone crying in the dark,” Quail said.

As her panic and fear increased, Quail thought her only option was suicide. One day, she went home with a clear plan to end her own life with a shotgun; unexpectedly, her ex-wife was in the house. They started talking, and Quail instead sought help from a therapist in Bucyrus.

“(The therapist) was the only person in the world I trusted to share this with,” Quail said. “She got me true medical research, verified, peer-reviewed resources, and that's when I discovered that what I was dealing with wasn't a spiritual issue at all.”

Quail was referred to a gender specialist in Columbus. As she learned more about her identity, she concluded she could, and would, come out.

“Aug. 1, 2017 was when I officially stopped living a lie and became the woman God created me to be,” she said. “In the meantime, the Church of the Nazarene had acknowledged that being transgender and/or transitioning is not a sin, which was huge for the church … But that being said, I was now a woman married to a woman, and they couldn't condone that.”

Once Quail began to live her life authentically, she sought a new denomination and dug deeper into scriptures she thought she knew well. “I had to go back and redo all my theology because I knew two things. One, I love Jesus with all my heart, soul, mind, strength and body. Two, that I was a female. My church told me those two can't coexist, yet here I am.”

Along the way, Quail met a former Wesleyan minister who is gay, and they started a new ministry called Acts 8 of the Shelby United Church of Christ. The group meets on Sunday evenings at 6 p.m. and prioritizes creating a space where LGBTQ people are comfortable, fully included and treated like family. Due to COVID-19, sermons are only live streamed at this time.

The name Acts 8 is based on the group’s overall message. “Philip was taken to the eunuch who was reading the gospel of Isaiah, and Philip explained it. (The eunuch asked), ‘Why can't I be baptized?’ and Philip baptized him,” Quail said.

“If you read the Old Testament, eunuchs can never be saved, but here we have a New Testament where God goes outside of man's boundaries and saves this one,” Quail said. “That’s what I would be called in the Old Testament—I'd be called a eunuch. So, we chose that as our name because that's who we are.”

“(Quail’s) pastoral message is a message of inclusiveness; she opens the door to Christ. Instead of setting up walls and barriers, she just opens the door and says, ‘come to him,’” Graham said. “We shouldn't be putting up barriers between the people that need Christ and Christ. We should be knocking those barriers down whenever possible, to bring people to him.”

Quail aims to make this ministry a place of healing. “We’re kind of like a halfway station where they can come in with other people that are LGBTQ,” she said. “Come in and worship with us and be loved by us and connect to your family.”

For Graham, taking communion at Quail’s house when the ministry first began was extremely healing, especially the first time it was offered. “When they passed out communion, I started crying because it was the first time, in my entire life, I'd done communion as myself. To feel that connection—I bawled, absolutely bawled. It was a very moving experience for me.”

“The church was never meant for you to be afraid of it,” Quail said. “Church is a place where you can come in and you can connect with other people in love. That's what church is about.”

Graham has also witnessed the peace Quail has found over the past several years. “Now that her insides and outsides match, and she's in harmony with herself, it's a truly wonderful thing,” he said. “(She is) one of the bravest individuals I've ever met in my life. She holds her head up high. And she does so with dignity and grace.”

Six years ago, Quail saw little hope for continuing her work as a pastor if she came out as transgender—yet what looked like the pinnacle of her spiritual journey was just the beginning. Her story sheds some light on the challenges of coming out as transgender in a small, religious community and living as an LGBTQ person of faith.

Quail’s ongoing journey of being true to herself has not been easy. Since coming out, she has lost lifelong friends, was fired from a job she loved and has had to completely redo her theology. But the internal peace she has gained since embracing her authentic self makes it all worthwhile, and she uses her story to share her faith with the community.

“I want to minister—that's where God called me—to the LGBTQ community, to tell them that just because you belong to the acronym doesn't mean you can't belong to Christ. They're not mutually exclusive,” Quail said. “God doesn't care about that. He cares about you. He wants you. He doesn’t care who you love, or what you look like or what gender you are. He wants you.”

For LGBTQ people of faith or allies seeking to better support them, Quail recommends reading the book Torn: Rescuing the Gospel from the Gays-vs.-Christians Debate by Justin Lee. General information about LGBTQ issues can be found at the Human Rights Campaign and The Trevor Project. Local pastors at open and affirming churches are also a great resource, including James Robinson at First United Church of Christ in Shelby and Karen Liddy at Peace Evangelical Lutheran Church in Ashland, who were both very helpful to Quail.