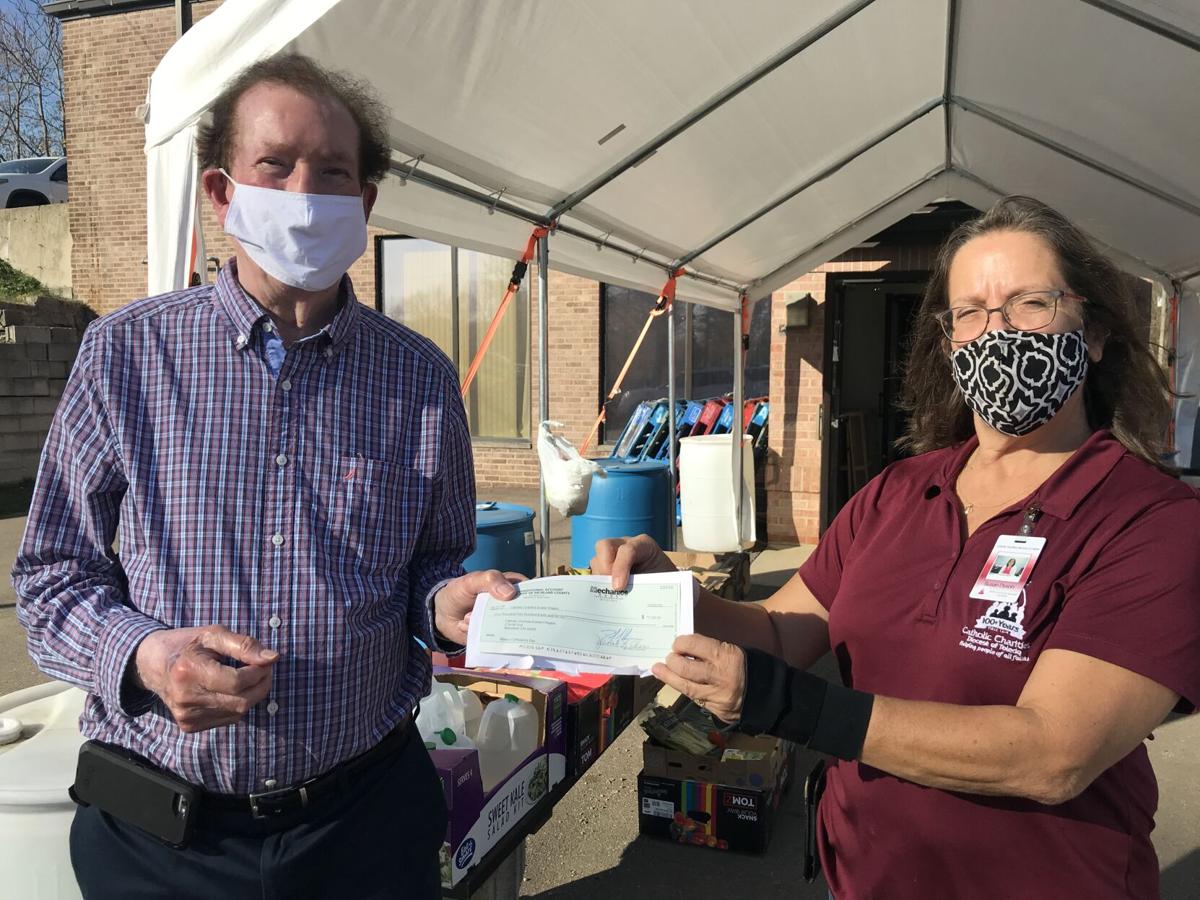 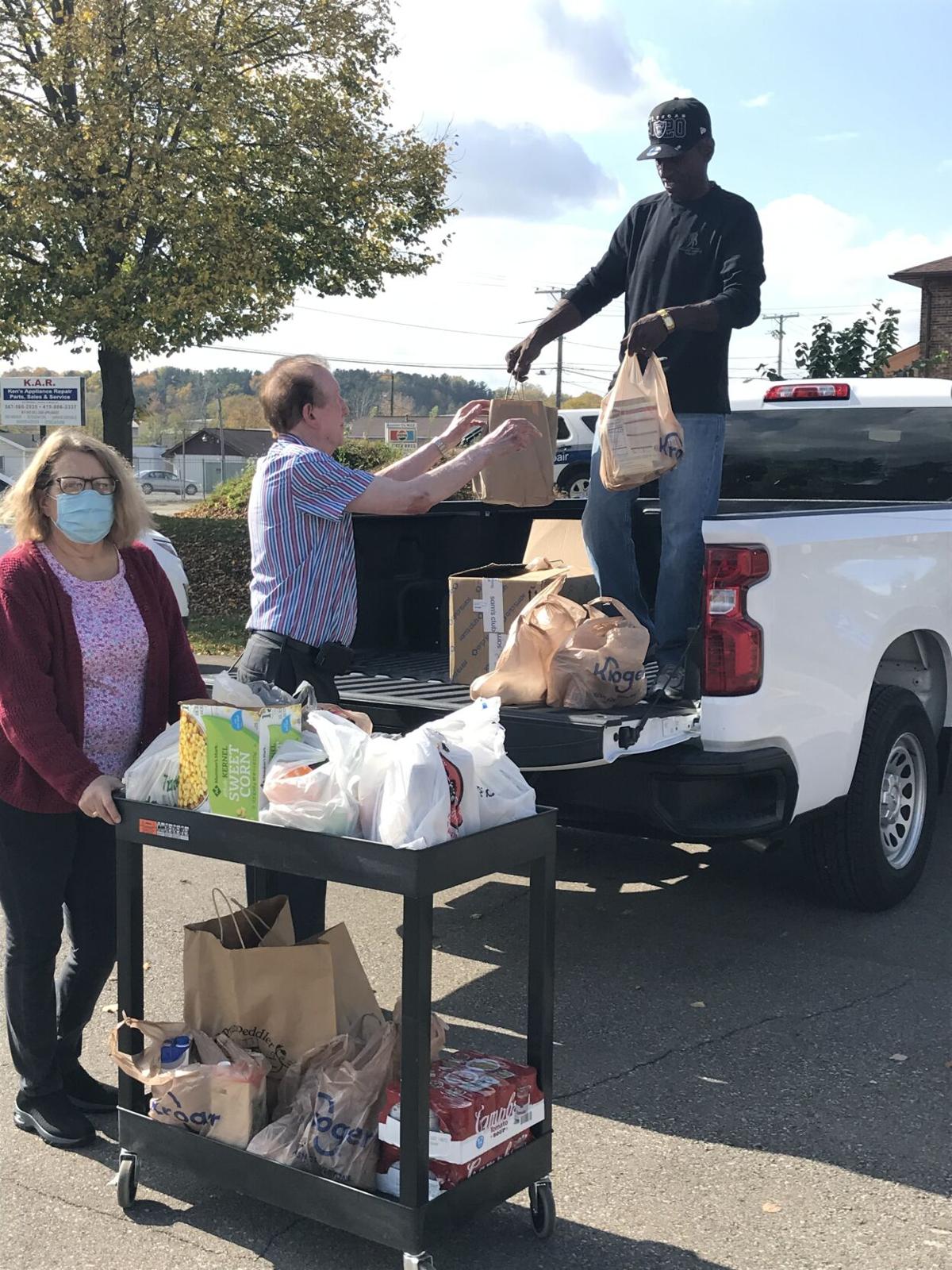 Stumbo helps load a man's truck with food and other necessities, courtesy of the food pantry at Catholic Charities. 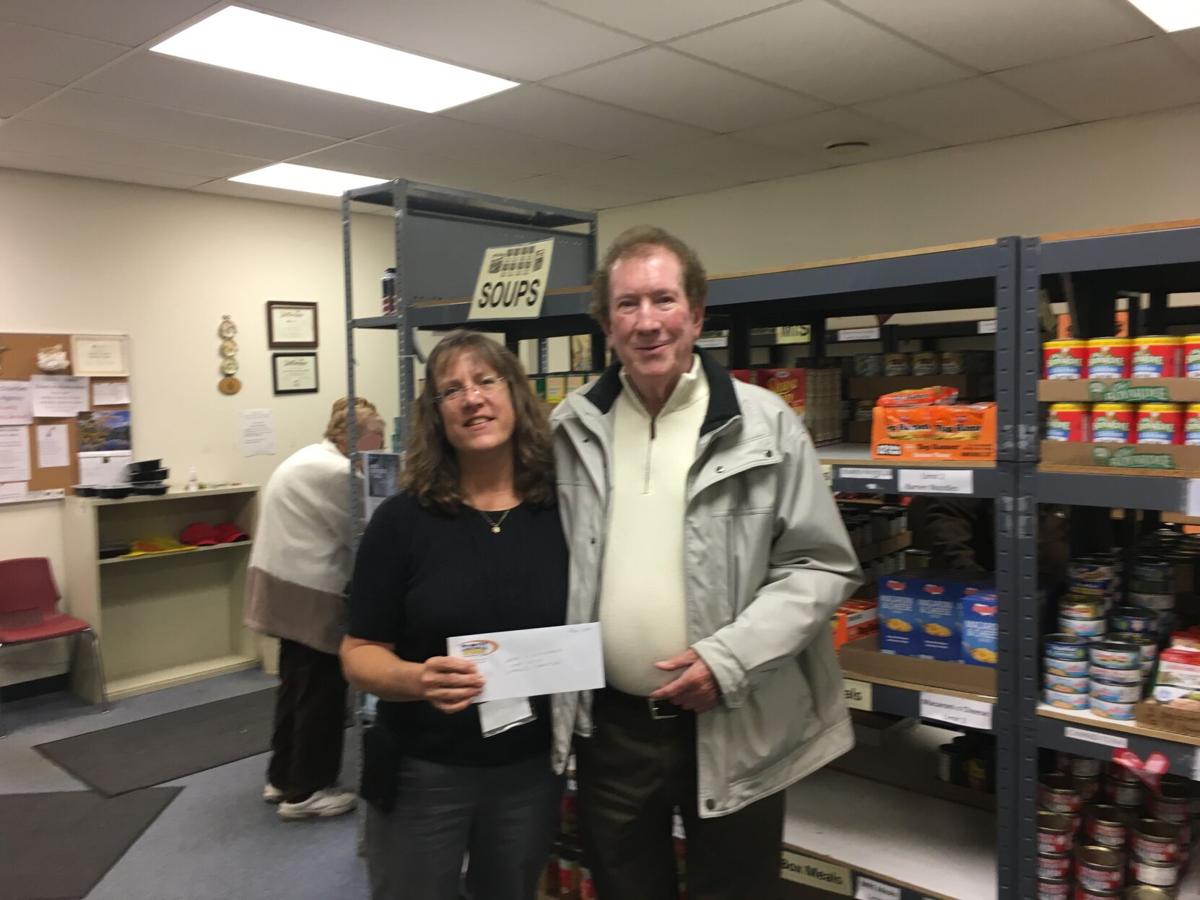 Susan Dyson and Doc Stumbo pose inside the food pantry.

SHELBY – Since 1985, Shelby resident Doc Stumbo, 83, has put his all into fundraising and giving back. His work over the past 35 years has helped Richland County residents receive, as well as give back.

After serving two years in the Vietnam War as a construction engineer, Stumbo moved to Shelby in 1958 after living in West Virginia all his life. He started working at General Motors, where he stayed for 42 years.

While in his line of work as chairman of the United Auto Workers in the 80s, Stumbo’s employer at General Motors wanted him to work on campaigns for United Way of Richland County and speak with agencies as well as the media.

Having never heard of the organization at the time, Stumbo took it slow and decided to check out what they do with the money they receive. He was not disappointed in his findings.

During his first three years running campaigns, Stumbo helped raise $300,000 each of those three years with his own committee of 14 people.

Seeing what a huge impact he had on the Richland County community, Stumbo was given a full-time job representing General Motors and showcasing what they were doing for the community. Once he left General Motors in 2000, he became public relations coordinator at Graham’s Auto Mall. His fundraising continued there for 20 years, where he was able to hand out $1,000 to communities and take all requests for donations.

Through his work with United Way, Stumbo was able to host fundraisers and walk-a-thons, travel around the county and influence others to give back. He would take busloads of people doing community service over to the Friendly House or Salvation Army to show what those organizations did and inspire them.

“We worked a lot of overtime—seven days a week and 12 hours a day,” Stumbo said, but in the end, it was all worth it for him and his volunteers.

Catholic Charities has worked with Stumbo on many projects over the years. Rebecca Owens, regional director and disaster relief coordinator for Catholic Charities Diocese of Toledo, can recall numerous occasions where Stumbo helped them. By conducting small food drives and making Saturday deliveries, he’s ensured the pantry remains fully stocked so that mouths are fed.

“He puts in an enormous amount of time serving the community and we have all been blessed by his servant's heart,” Owens wrote in a statement. “Years ago, when our office was located downtown, our pantry was much smaller, and we would oftentimes have to close the pantry due to no food.”

Stumbo is also willing to arrange for a vehicle from Grahams if Catholic Charities need help transporting food to the pantry, as well as referring area businesses and donors to the pantry if they are looking to make a donation to a nonprofit.

Although he’s not a Richland County native, Stumbo said it’s always been his home, and he couldn’t be prouder or more thankful to be part of such a giving community.

“I've never met an enemy. Everybody is wonderful,” Stumbo said. “And every time they see me, they want to know what I'm collecting for. That's been for 38 years, and people give and give in Richland County. I'll never get over how good they are.”

This article is brought to you by Parr Insurance.