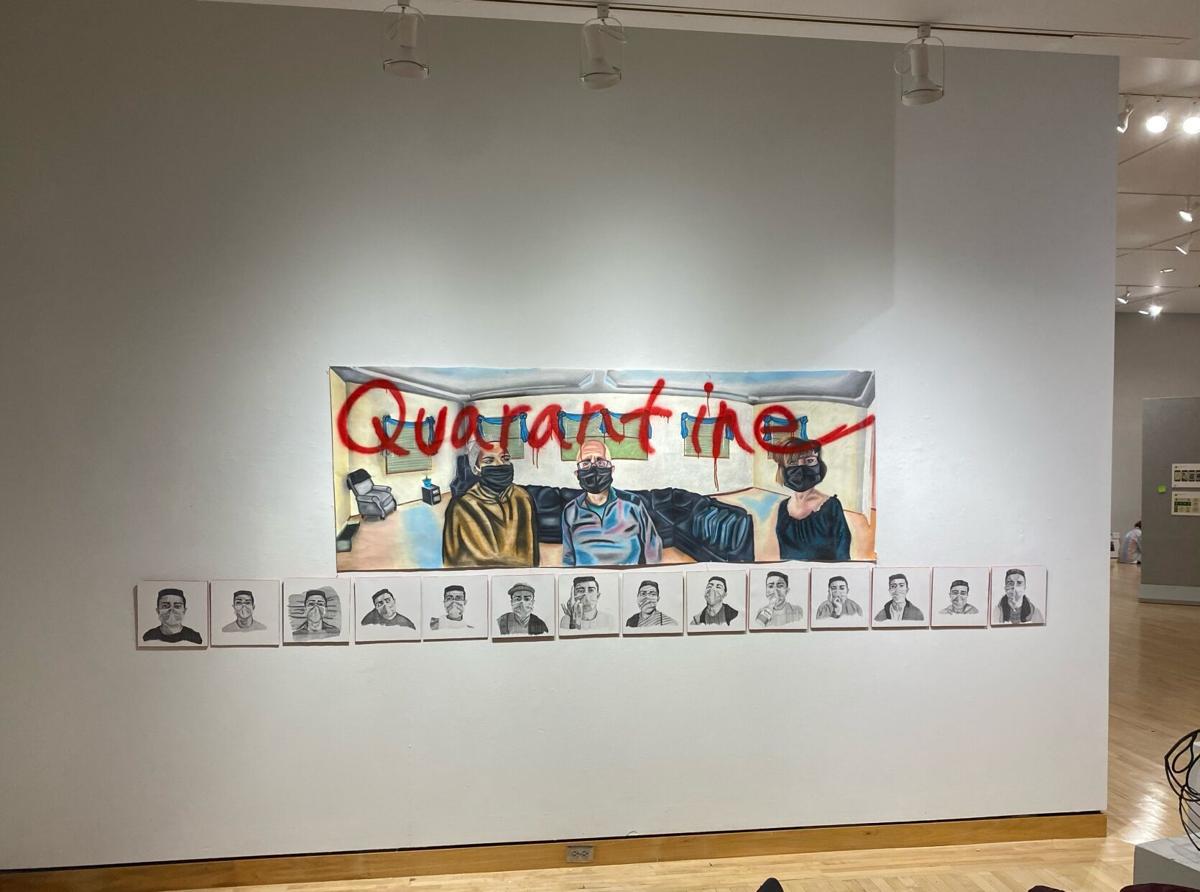 Tony Sansalone's artwork, "Stuck in Quarantine," on exhibit at Bowling Green State University during the 70th Annual Undergraduate Art & Design Exhibition. The work received "best in show" and a first place award in the drawing category. 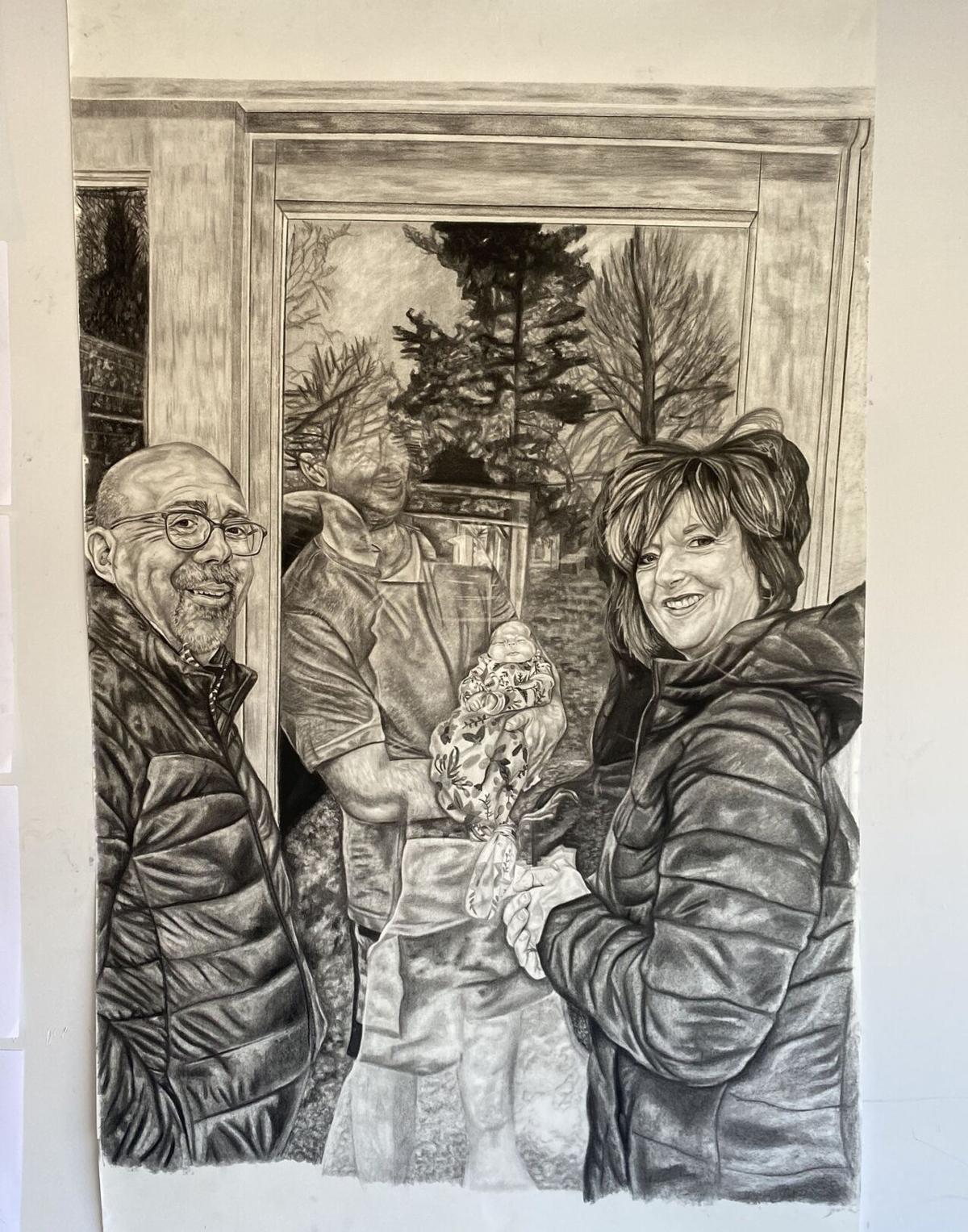 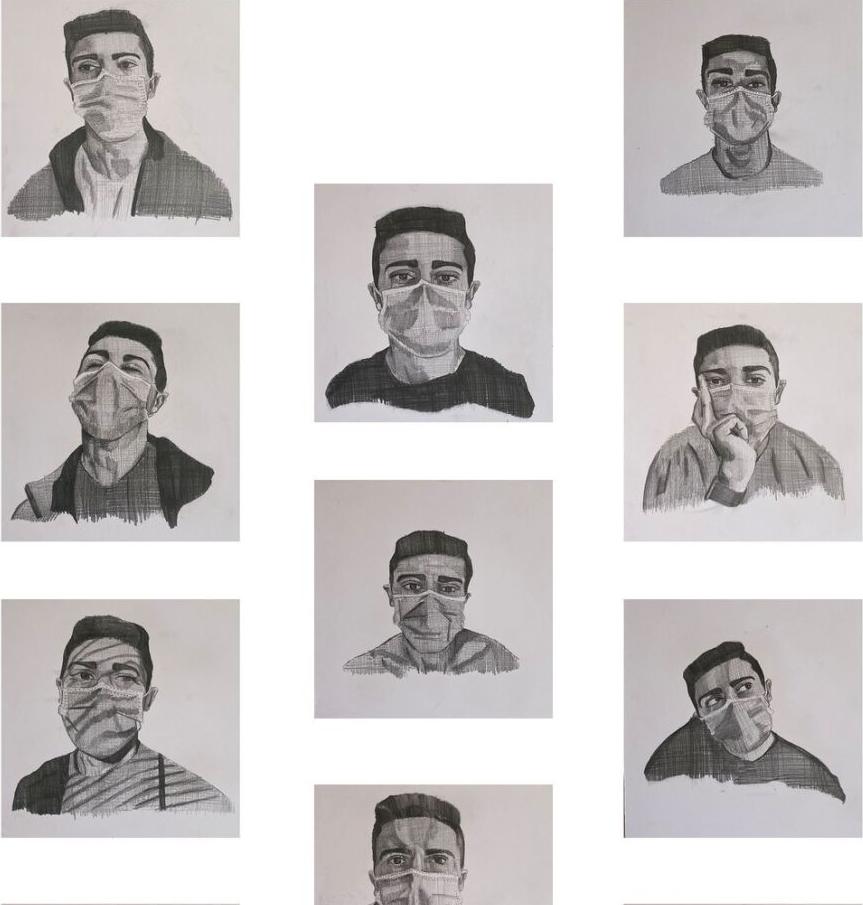 BOWLING GREEN -- Tony Sansalone wants his work to tell a story you can't ignore. That's why he chooses massive pieces of paper -- sometimes 10 feet in length.

“I like to work big because it adds this astonishing factor. It can be viewed anywhere in the gallery or in a show," said Sansalone, an art student at Bowling Green State University.

“I feel like the work I create kind of has a narrative to it. I want it to be the center of attention, the focal point or the elephant in the room. It’s just something so big you can’t get past it," he added.

Sansalone, an Ontario native and art student at Bowling Green University, had three works accepted into the show. Each depicted a different aspect of life during COVID-19 -- a series of self-portraits drawn during quarantine, meeting his newborn niece through a sliding glass door and the resounding plea of health officials to mask up in public.

“Last semester I was in a drawing class and we had to create a body of work,” he said. “I kind of wanted to have a COVID theme behind it. It’s just something we can all relate to.”

The show's jurors were Eric Zeigler and Dr. Mysoon Rizk, both professors at the University of Toledo School of Visual and Performing Arts.

"When making the difficult decisions for awards, we considered not only a work’s technical proficiency, but also its conceptual capacity and aesthetic ambitions," a jurors' statement read. "Often, a deciding factor hinged on how such conceptual complexity engaged in dialogue with the history of art."

Sasalone's “Family Separated by COVID” is a charcoal drawing of his parents bundled up in winter coats to meet their granddaughter for the first time.

The piece is five feet tall and Sansalone estimated it took between 100 and 120 hours to complete.

“My brother actually had a kid at the end of March. It was right at the beginning of COVID, so nobody really knew what was going to happen,” he said. “It was something pretty personal, capturing a moment like that.”

“Stuck in Quarantine” contrasts a colored panoramic view of Sansalone visiting his parents in their living room with 14 self-portraits in black and white.

Sansalone had to quarantine shortly after visiting his parents, who tested positive, so he drew one portrait a day to capture his moods, which ranged from anger to exhaustion.

“It was miserable. It was just so boring,” he recalled.

“Wear a Mask” features the faces of his family and friends, all masked, with the work’s title spray-painted in bright red on top.

“When I was doing it, there was always something that was missing. It was just these people wearing a mask on this 10 foot piece of paper,” he explained.

“There’s nothing like spending a hundred hours drawing something that you have an intimacy with and a closeness too, something so precious that you've worked on so long, and then to completely change it in a matter of seconds,” he said of the sudden decision.

“It added a level of shock factor and a massage and it added to the narrative,” he said.

Sansalone also made an intentional choice that the masks would be the only portion of the drawing done in color.

“I wanted that to be the primary focus, just to wear a mask,” he said. “I didn’t have a political intention, but unfortunately it is considered political ... So not everyone is going to agree with the message, but that’s OK.”

Sansalone graduated from Ontario High School in 2018. He is majoring in studio art with a minor in printmaking.