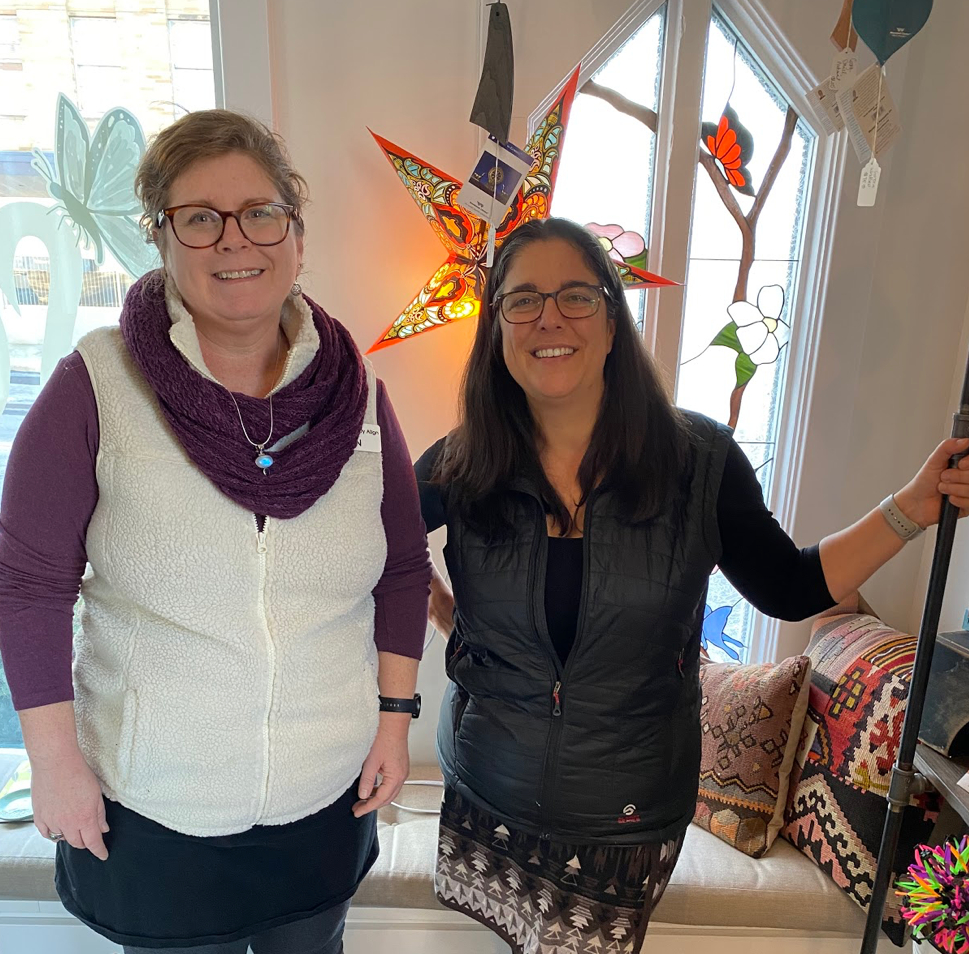 Director of Operations Jennifer Blue (left) and Founder of Mind Body Align Annamarie Fernyak (right) hope other teams will join in a little soft competition against them for the 10,000 steps a day challenge. 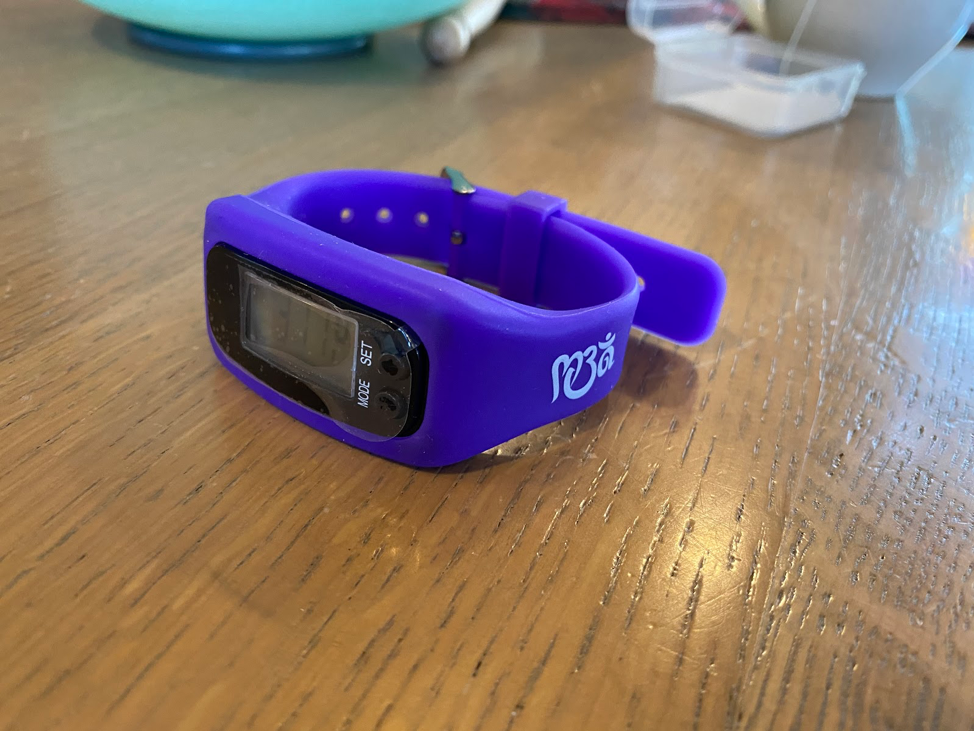 Each contestant will receive a free MBA-branded fitness tracker after registering to make sure they're reaching their 10,000 step goal each day. 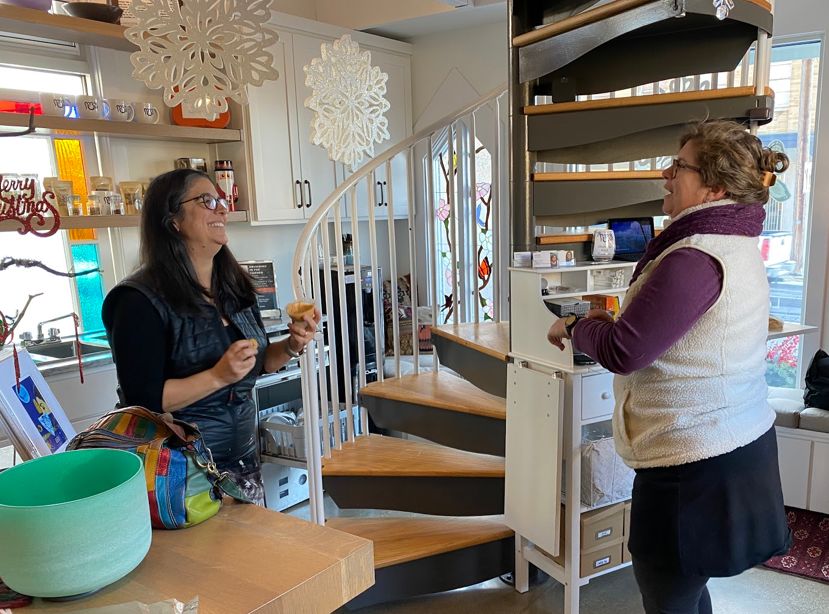 Founder of Mind Body Align Annamarie Fernyak enjoys a snack while getting her steps in with Director of Operations Jennifer Blue.

MANSFIELD - Annamarie Fernyak, founder of Mind Body Align, power walks in place alongside her co-worker Jennifer Blue in the tiny kitchen located inside of The Butterfly House. She casually chews on a chip with some dip in hand while trying to build up a sweat.

“I’m aware of the irony here,” she says with a laugh and continues on.

As she heads into 2020, Fernyak’s committed herself to walking 10,000 steps every single day in January. After giving it even more thought, she decided to give other people the opportunity to join her campaign to start the new year off the healthy way.

“I set it up so that I walk more, and I did it because I need to be held accountable to my own goals, and I know that if I have these other teams out there that I’m kind of competing against, in a soft competition, that I’ll do it,” Fernyak said.

In order to participate, you must register online with a team of no more than five and join the 10,000 Step Challenge group on Facebook. Each registration will come with a free MBA-branded fitness tracker. The challenge can be done on your own, but Fernyak suggested working with a team.

Awards and recognitions will be given out at the end of the challenge. The individual closest to 10,000 steps each day and who most faithfully records their steps will receive a wellness gift basket to help continue their journey (valued at over $150). For the corporation with the most teams, a free Coffee Talk will be brought to their workplace by the team of Mind Body Align.

Weekly prizes will be given out to whichever team shows the most creative ways they get their steps in, as well as the team that’s the most inspiring.

Fernyak wants to bring movement to the forefront of people’s minds again, including herself.

“I’m so focused on my business that if I don’t set goals other than business goals, all I’ll do is business. It’s what I do, it’s kind of the lifestyle for me, so I have to set goals for fitness and nutrition and things like that,” Fernyak said.

Although 10,000 steps may seem like a lot, Mayo Clinic states that the average American walks 3,000 to 4,000 steps a day — or roughly one and a half to two miles — and that they should aim toward reaching that desired goal.

“If you start with a goal of walking 10,000 steps by the end of January every day, and you actually walk a little bit more each day toward 10,000 steps, you will be walking 10,000 steps each day,” Fernyak explained. “But if you say, ‘Tomorrow I’m going to walk 10,000 steps’ and right now you’re only walking 2,500 steps on average that’s just not an achievable goal. I mean, it’s achievable, but you’re not going to be able to maintain it.”

Fernyak noted the power that comes with setting goals and achieving them, but even more than that, having that moment of self discovery.

In preparation for the contest, Fernyak has already been going out for walks with friends for two hours throughout the week and schedules hikes and walks with her husband on the weekends.

Wanting to hold up the values of her company, Fernyak hopes other people will see this competition as something fun and a way to stimulate conversation and encouragement for them to get out and walk more starting Jan. 1.

“If it’s there and I know it’s something I want to achieve, I actually have to schedule it into my life,” Fernyak said. “It’s not just going to happen because I want it to happen, it’s because I make it happen.”