MANSFIELD – Around 6 p.m. on Wednesday evening, about 30 people gathered by the gazebo in Central Park for the Mansfield Gay Pride Association’s second annual Transgender Day of Visibility event. The first event was in 2019, but it was cancelled in 2020 due to the coronavirus.

International Transgender Day of Visibility takes place annually on March 31, and it is a time to celebrate transgender and gender nonconforming people for the courage it takes to live openly in their communities. It is also a time to raise awareness about discrimination and violence transgender people continue to face.

Before the event began, people huddled quietly together in groups and talked amongst themselves. Many seemed to know each other well and exchanged enthusiastic greetings.

President of the Mansfield Gay Pride Association Kelli Quail shared why her organization puts on this event and what it means to her personally, as a transgender woman.

“It’s about not living in fear any longer. It's about being seen, being recognized, being visible and showing the world that we matter, we're here, there's nothing to be afraid of,” Quail said. “And for me, it's just about taking the power of my life back.”

Positive Progressions Program Lead Sheila Barone said, “(Transgender Day of Visibility) is also to show the cisgender population that we do exist and only want the same things they do – love, shelter, job, medical care, family and to not be murdered for who we are.

“It's also a way of celebrating our successes as a community, such as Leyna Bloom being the first Black, Asian trans woman on the cover of Sports Illustrated or Dr. Rachel Levine being the first Senate-confirmed appointee that happens to be transgender.” 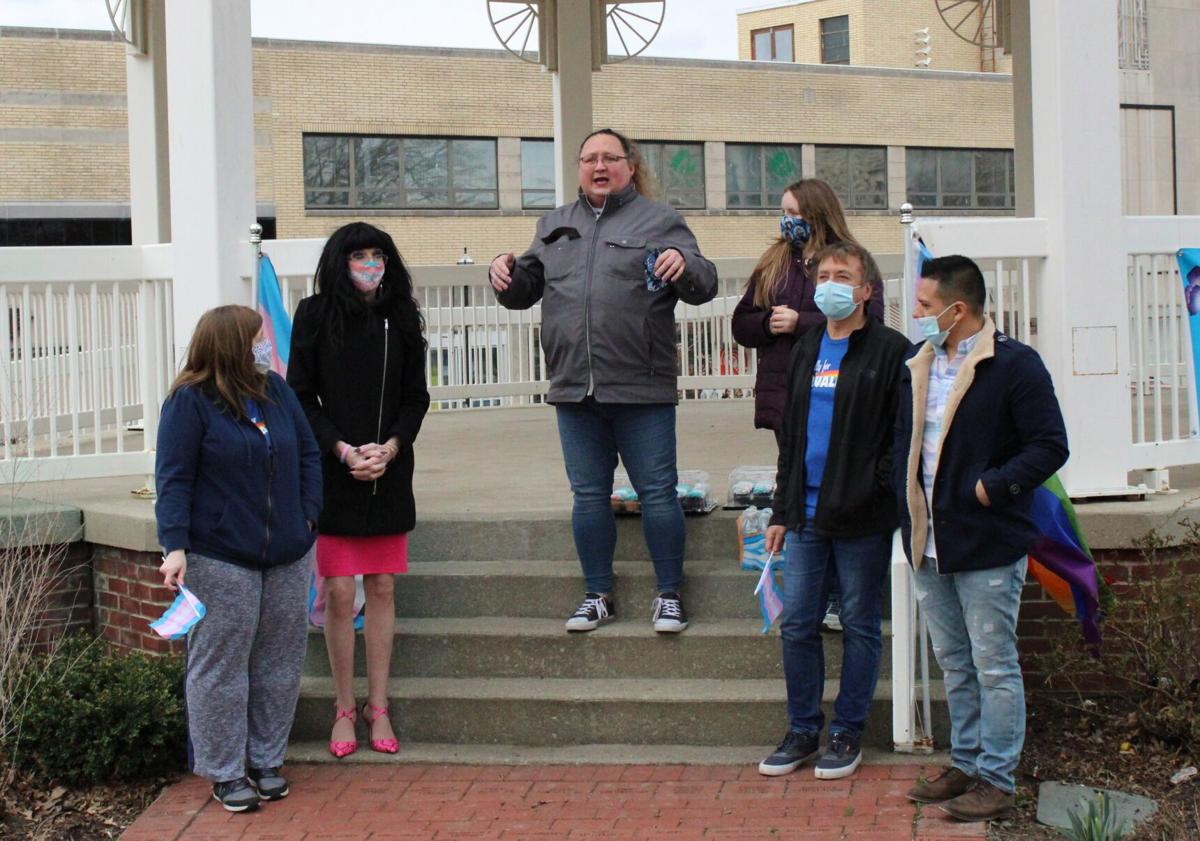 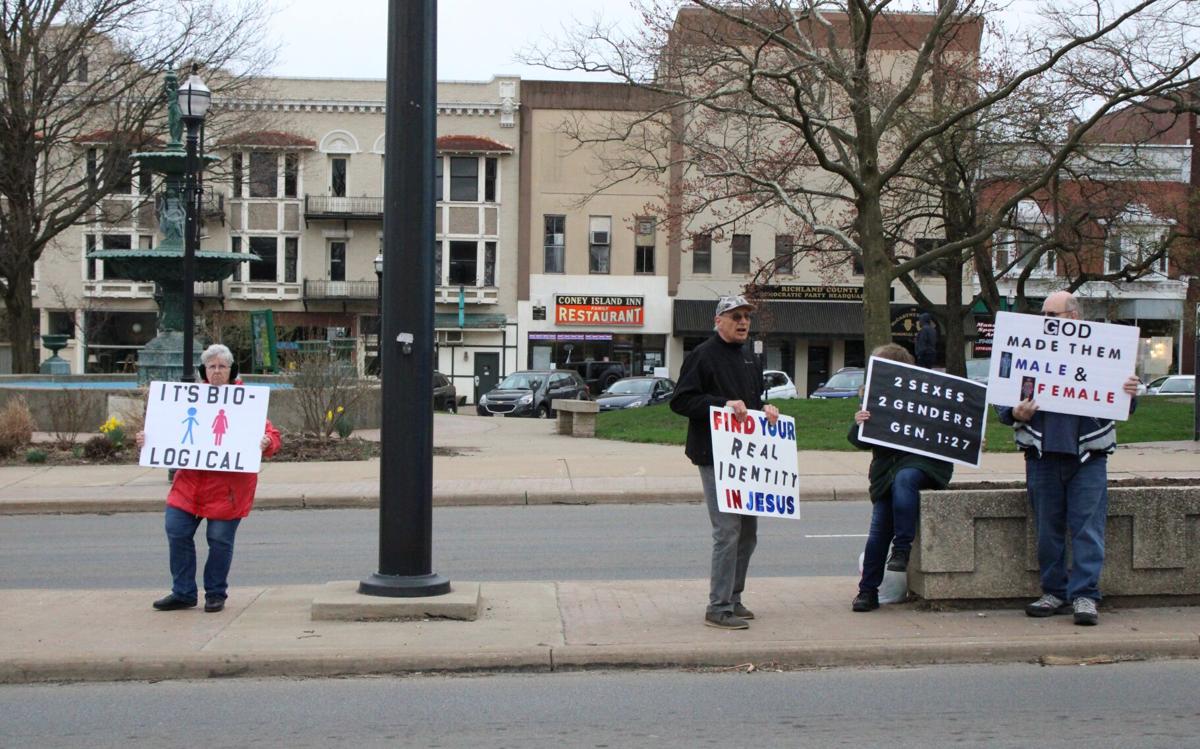 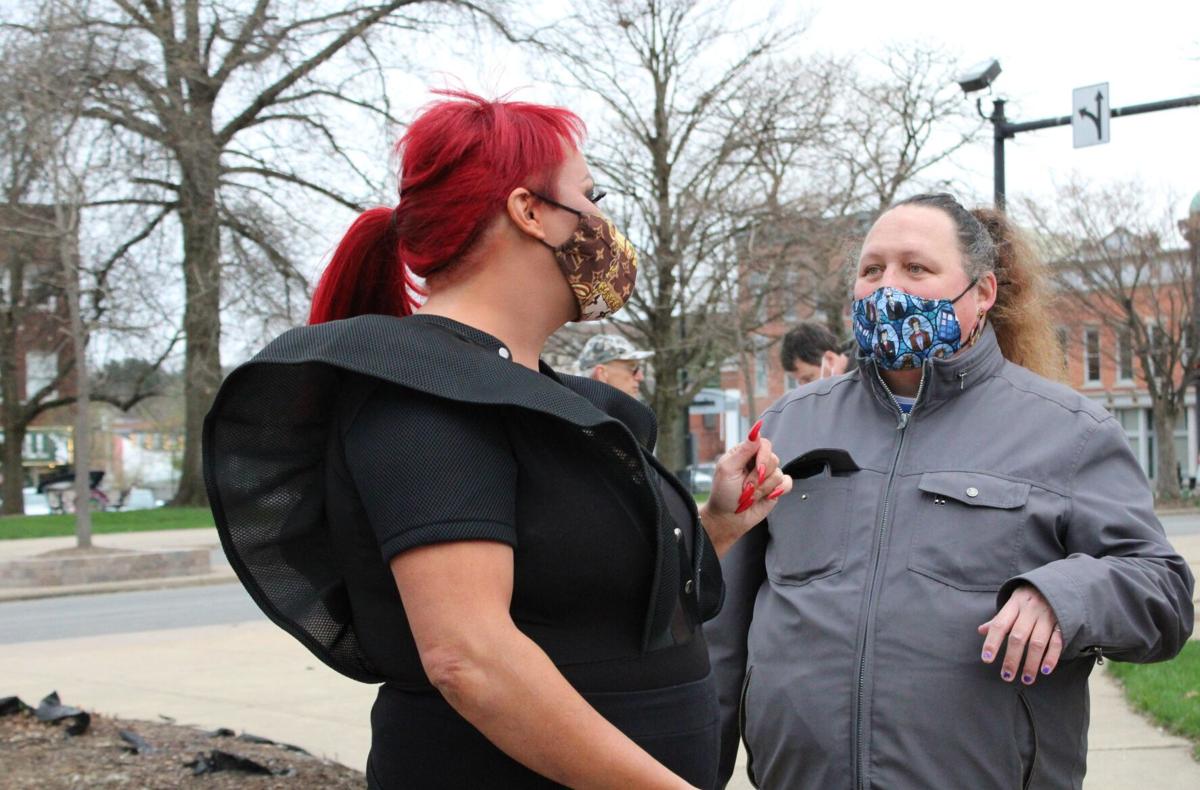 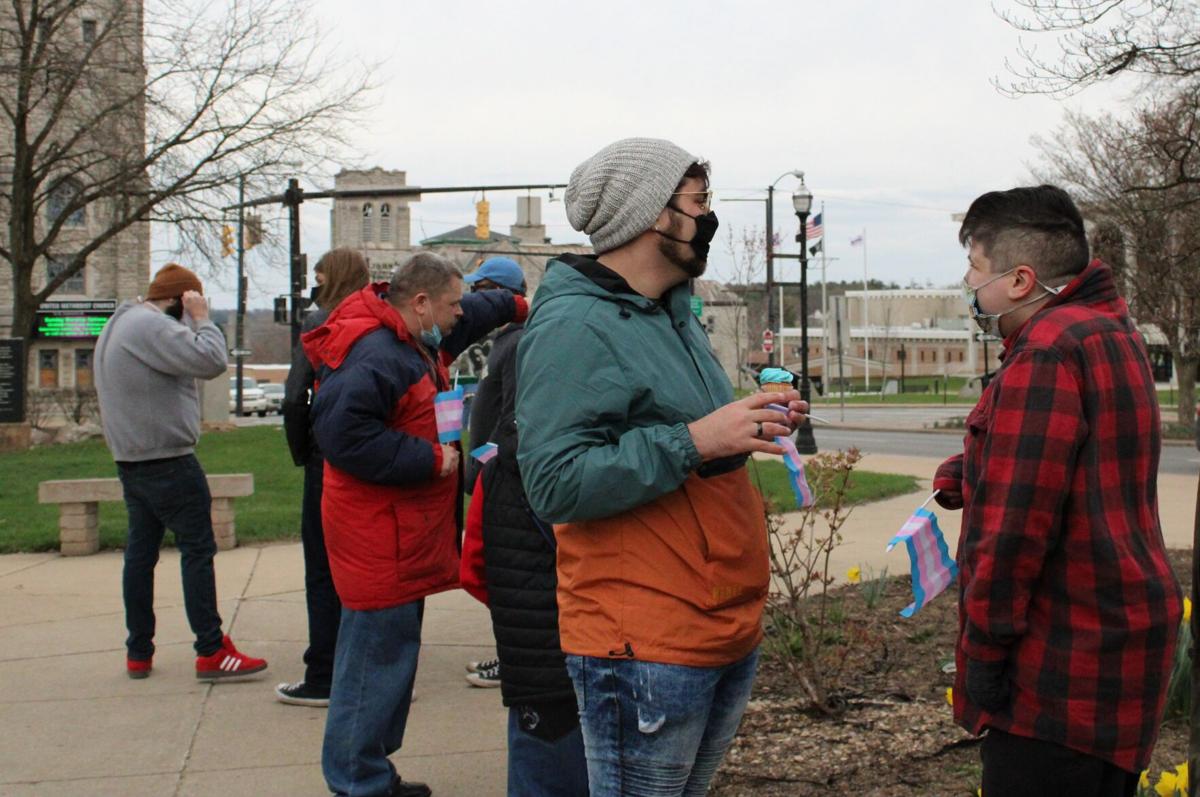 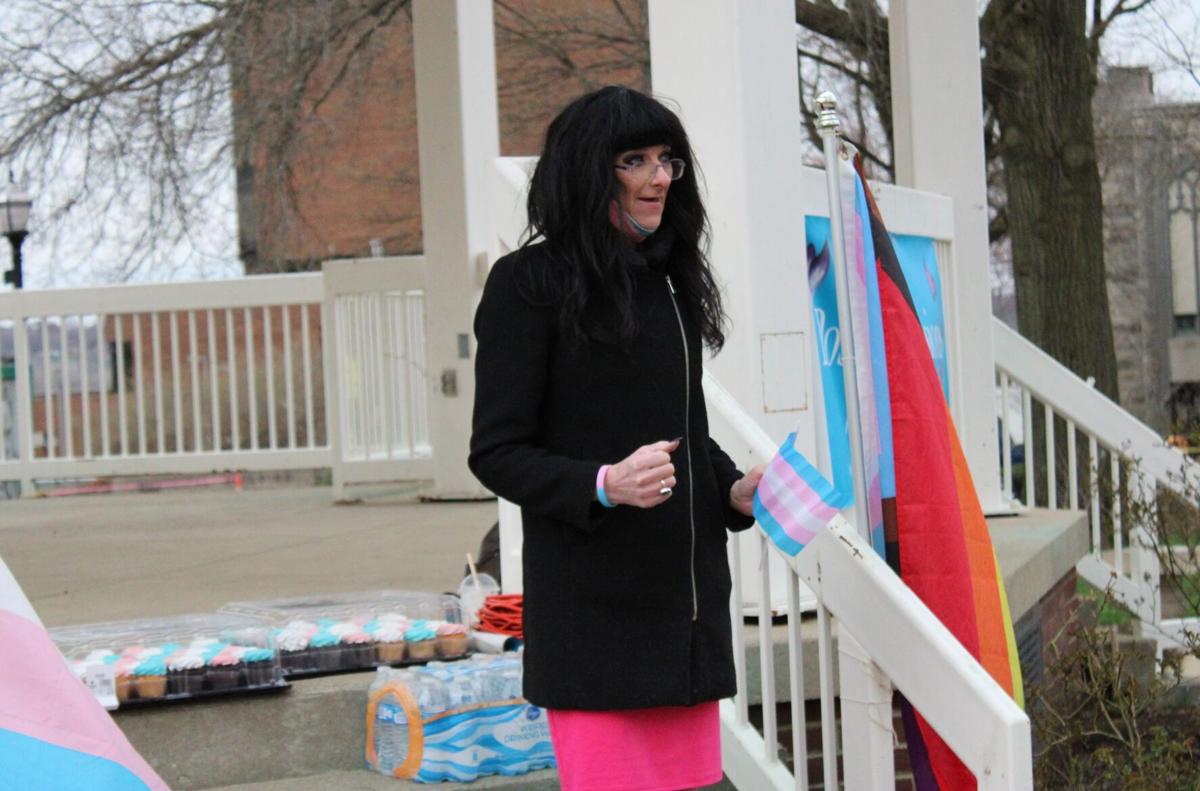 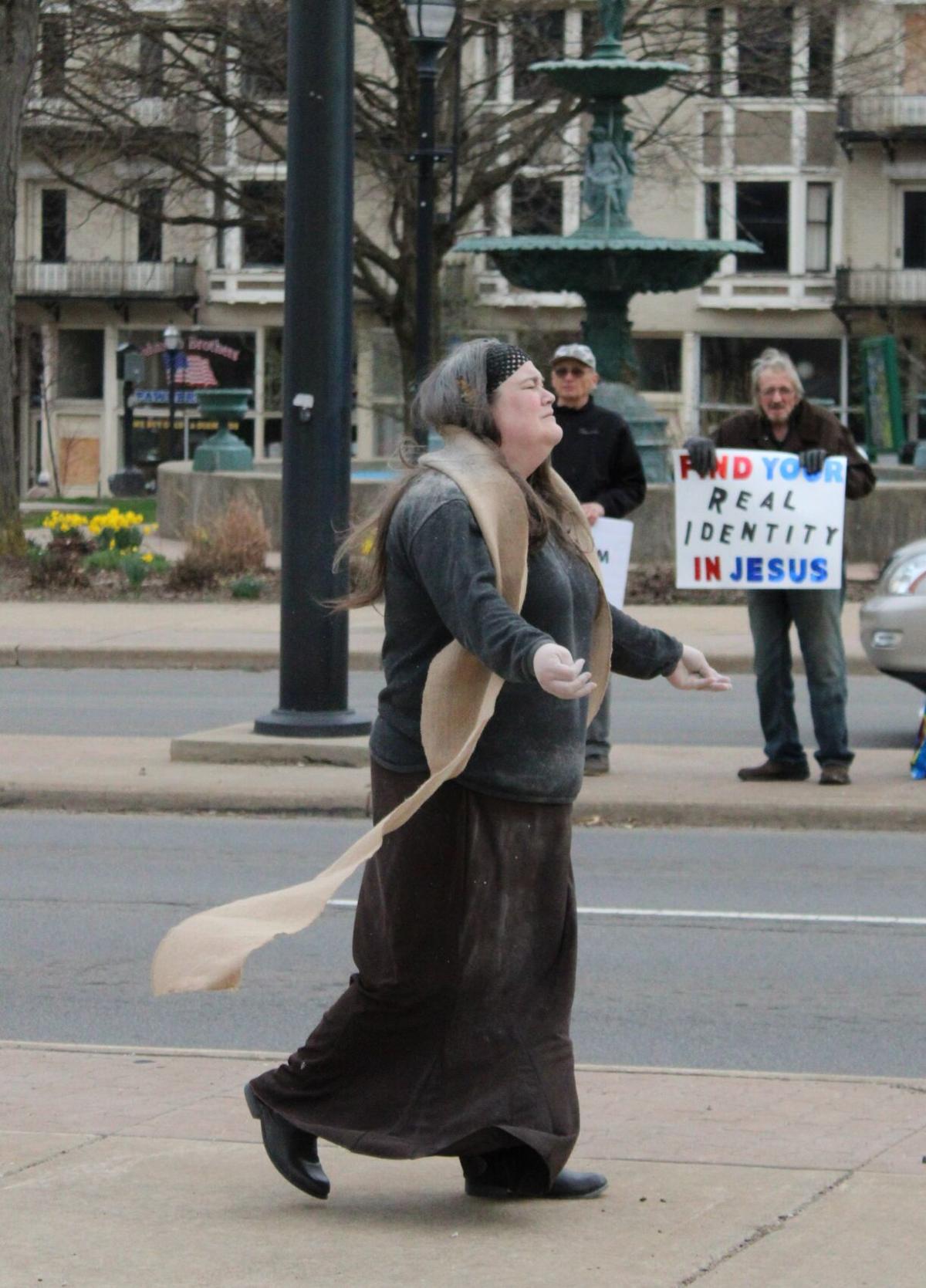 Four protestors arrived and stood on the median strip of Park Ave, holding signs with the following messages: “It’s biological,” “Find your real identity in Jesus,” “2 sexes 2 genders Gen. 1:27” and “God made them male & female.”

Joshua Koehler, who is running for Mansfield City Council Ward 1 and attended the event as an ally, approached the protestors and asked them some questions about their beliefs.

"I asked them, 'Do you not think that gay people and transgender people deserve to live in America just like you?' They said, 'Well, we're not here to debate that with you. We're just here to express our (First) Amendment,'" Koehler said.

"If elected, I'll be the first openly gay elected official on the city council. I want to come out support my friends and the community and just let them know that there are elected officials and people that are running that are here. They're listening. They care about them," he continued.

Quail started the event by reading today’s proclamation about Transgender Day of Visibility by President Joe Biden. It was the first U.S. presidential proclamation in history commemorating this day.

In her speech, Quail talked about violence against transgender people, the legislative battles they are fighting and suicides in the transgender community.

“In 2014, by the grace of God, I survived a suicide attempt. I should have been dead. Two weeks after mine was a young girl named Leelah Alcorn. She was 17, from Cincinnati, Ohio, and walked out in front of a semi truck because she can no longer go on with the torture that was occurring at home and in school,” Quail said.

“Her life was snuffed out simply because people didn't want to accept her. That's why my middle name is Leelah. When I changed my name, I did that to honor her, because now I get to live the life that she never got to. I committed myself to fighting the fight for transgender youth and individuals who no longer are able to fight on their own,” she continued.

According to results from The Trevor Project’s 2020 National Survey on LGBTQ Mental Health, over half of transgender and nonbinary youth have seriously considered suicide.

Barone delivered a short speech after Quail’s, thanking the crowd for their support and love and urging them to live authentically and “lead with love.”

“The reason this day is important to me is because I know who I am. And if me being visible makes it easier just for one person to be who they are, it's worth getting the aggravation that I've had,” Barone said.

“It's not just about those that can look, quote unquote, passable,” she continued. “There are plenty of people who are gender non-conforming, non-binary, or intersex. There's no one way for you to be trans, and I don't think society gets that. They expect us all to be these ultra feminine, ultra masculine types. We're not.

As Quail and Barone spoke, a woman paced back and forth on the sidewalk, loudly wailing and reciting Old Testament biblical scriptures. She wore a sackcloth and threw ashes in the air. She refused to give a comment.

A man named Dave Hartz stood at a distance, quietly observing the event. He goes to Taylortown Community Church in Shelby and came to pray. He said he does not personally know any transgender people, but he has met them before in a work environment and he believes their “lifestyle” is sinful.

“I’m hoping they would just see that God does love them and created them to be a certain way and to fulfill a purpose,” Hartz said. “God doesn’t want to see any soul tortured and go to Hell … I want to see them saved.

“I’m not targeting a group. I’m targeting people to be saved for God’s kingdom.”

Jasmyn Webb, owner of the Beauty Bar, said she was thrilled to see events like this taking place in Mansfield.

“This is definitely a progression in the right way, for trans youth and trans folk in general, to be able to be themselves and come out,” Webb said.

“I love Mansfield, and people here have always been open to me, but being a transgender woman here, I didn't know any other transgender folks here when I moved here (seven years ago)," Webb continued. "So, to see others coming out now, and being okay with themselves—it’s just awesome.”