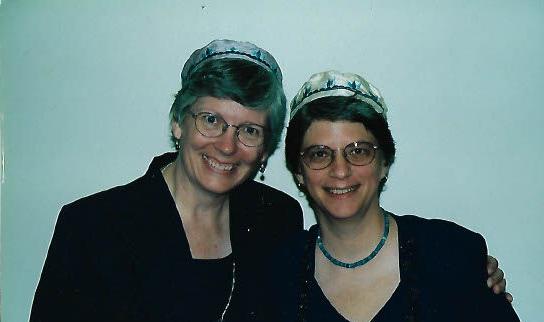 Nancy Shimer and Joan Friedman at their commitment ceremony in 2003 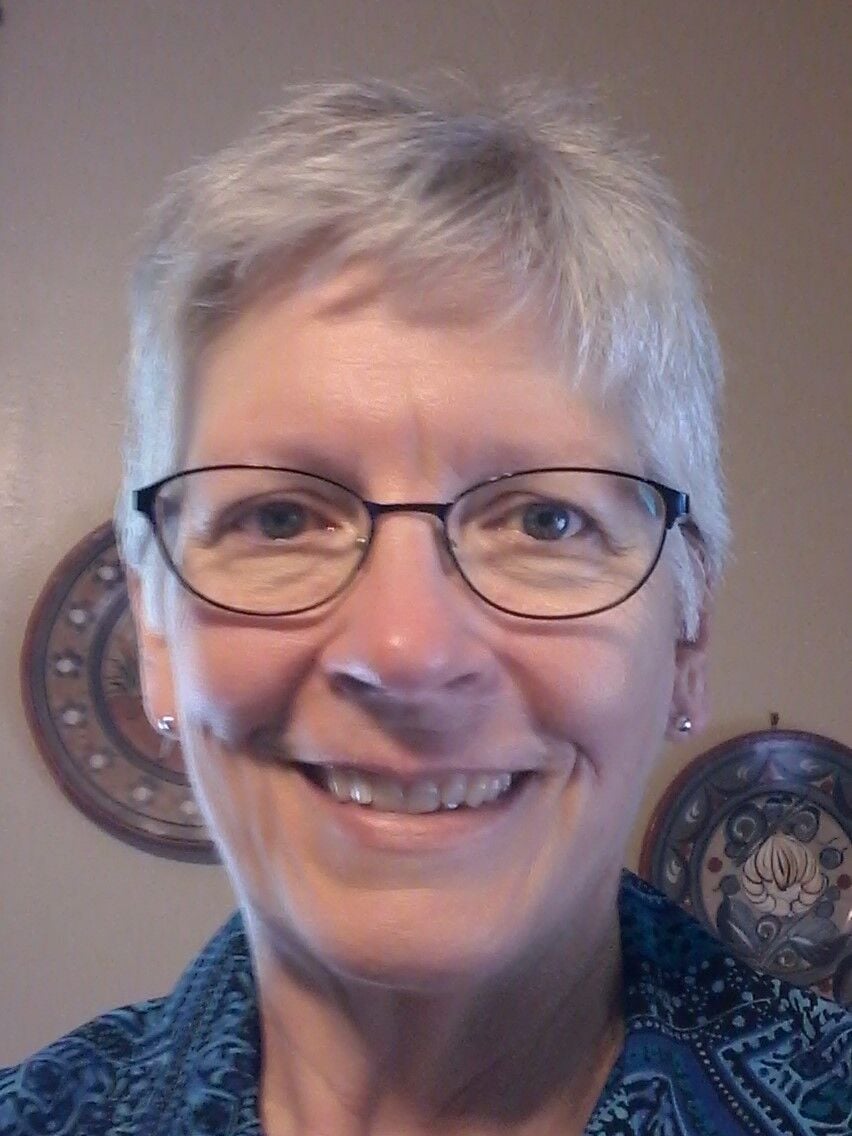 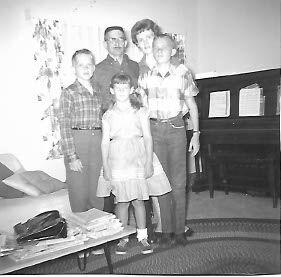 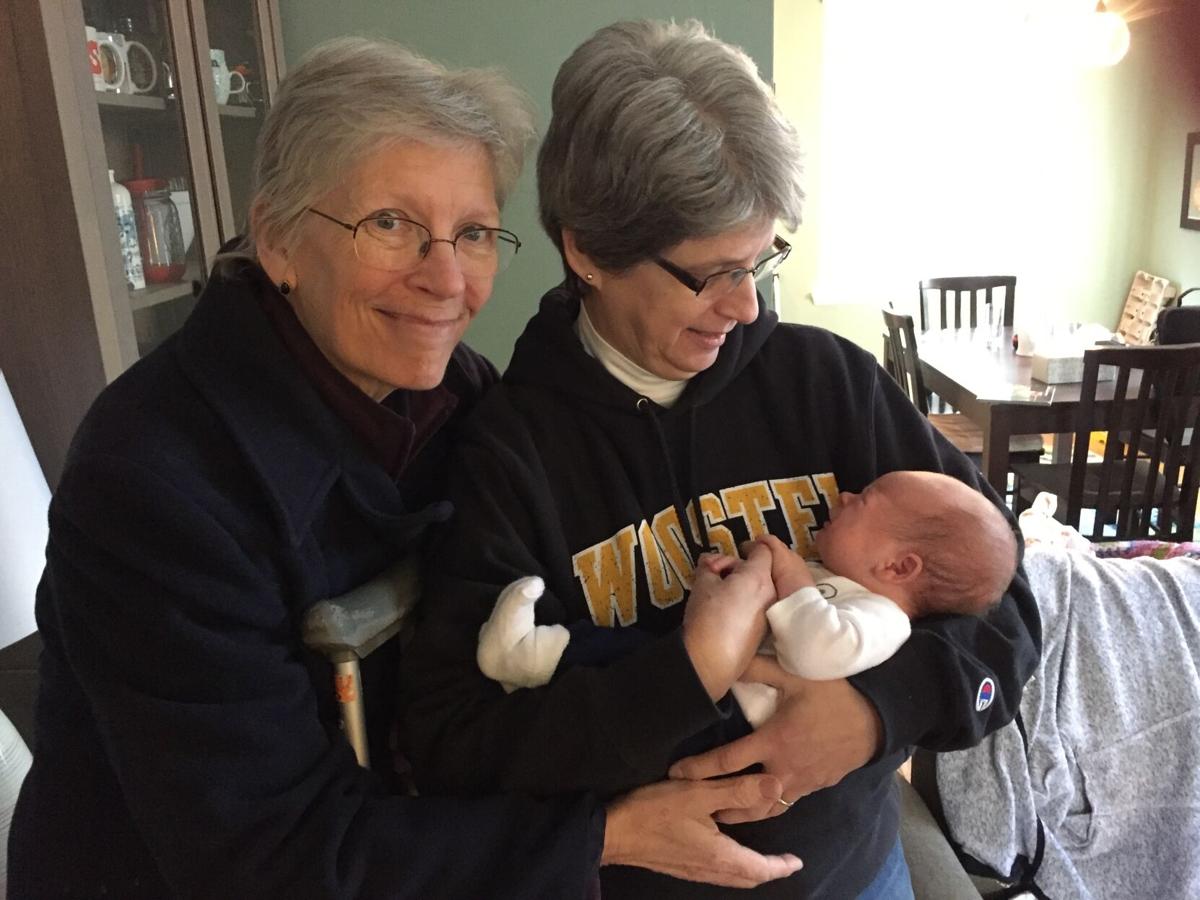 Nancy Shimer and Joan Friedman with their grandson, who is now 5. He and his little sister call their grandmothers "Savta Nan" and "Savta Joni." Savta is the Hebrew word for grandmother. 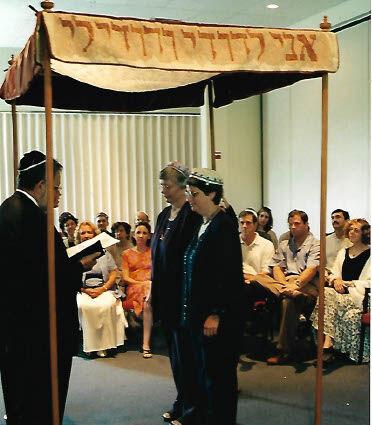 Nancy Shimer and Joan Friedman at their commitment ceremony in 2003

Emanuel Jacob Congregation is located at 973 Larchwood Rd. in Mansfield

EDITOR'S NOTE: This story is Part II of an ongoing series about LGBTQ people and their allies in local religious communities. The first story in the series featured Episcopalian priests from Mansfield and Ashland offering an inclusive message to LGBTQ people who have been hurt by religious rejection.

Shimer lives in Wooster with her spouse, Rabbi Joan Friedman, who teaches at the College of Wooster. Shimer joined Emanuel Jacob 15 years ago as a cantorial soloist (song leader) and a Hebrew instructor in the Torah School. Members noticed her contagious enthusiasm right away.

“When Rabbi Oppenheimer retired, people had been so pleased with how Nancy was working with the Torah School that they wanted to ask her to take on this role,” Congregational President Paul Hyman said. “She just leapt in and introduced a number of new things, like ways of celebrating different holidays.”

The celebration of Hanukkah is just around the corner, beginning on Thursday, Dec. 10. Shimer is adapting their annual gathering to a virtual platform to prevent the spread of COVID-19.

“I’m going to Zoom lighting the menorah so we can all kind of do that together and say the blessings together and maybe I’ll sing a song or two,” Shimer said. “Zoom doesn't work for singing together, unfortunately, so they'll just have to mute themselves and sing along with me.”

“Hanukkah is traditionally more of a home-based holiday. There’s no special service where you get together in the synagogue for Hanukkah. What you would (normally) do is have a regular Friday night Shabbat service and add a few readings for the holiday.”

“Our congregation, as many modern congregations do, has a big party. We light the menorah, and we sing Hanukkah songs, and we eat the traditional foods as a community. While it’s sad we can’t have our party, from a very traditional religious point of view, this is not a big deal.”

It is clear Shimer has a gift for education as she shares about her faith and work. A Jewish teacher for close to 40 years, she has taught a variety of subjects every age level from preschool to adult education since converting to Judaism as an adult.

Her parents were former Christians who raised their children without religion. “We did celebrate Christmas because it's beautiful and my mother loved it. We always had a Christmas tree,” Shimer said.

Shimer was exposed to different religions and encouraged to learn about the Bible as an important part of western culture. “I had cousins in town who I would stay over with and they would go to church on Sunday morning,” she said. “(And) I had a babysitter for many years who was quite devout.”

“I had some friends who were Jewish,” Shimer said. “They were all really cool people, and I would go to their houses during Passover. They let me have matzah (unleavened flatbread).”

Years later, Shimer met with a rabbi before marrying her first spouse, who was culturally Jewish but not religiously observant. “It felt like a homecoming to me,” she said. “The more I learned, the more it felt really familiar.”

After almost a year of studying with a Conservative rabbi in Ithaca, New York, Shimer officially converted to Judaism. She had already earned her master’s degree in education, and was offered a job teaching in the rabbi’s school. This launched her lifelong work as a Jewish educator.

Shimer and her first spouse had two children together before divorcing many years later due to personal differences. She was working as the education director at a large Reform school in New Albany when she met Joan Friedman. Friedman, ordained in 1980, was among the first women rabbis.

“She was working on her Ph.D. then and doing Scholar-in-Residence Weekends as a side thing, which is common among Jewish congregations in the United States,” Shimer said. “They'll have a scholar with some particular specialty come for a whole weekend, attend services and do study sessions.”

Friedman came to Shimer’s school for a Scholar-in-Resident Weekend when they met for the first time.

“It was love at first sight,” Shimer said.

“The second weekend that Joan came to my congregation in New Albany had to do with LGBTQ issues. It was a whole weekend devoted to ‘what is the history of that?’ and ‘what is the biblical scholarship on that?’” Shimer said. “At that time, that was really important, and it was very educational for people. I think we're kind of beyond that.”

Some people were surprised that Shimer was dating a woman, but there was no internal struggle for her to accept her own sexual orientation. This may largely be attributed to her parents, who never perpetuated homophobia in their home.

“I remember they had a friend who was openly gay, which was pretty amazing at the time. They just told me, ‘Oh, that’s Paul and his partner, and they’re in love,’” Shimer said. Born in 1953, she also remembers her father taking her to a civil rights demonstration when she was 7 or 8.

In 2003, a year after they met, Shimer and Friedman formalized their relationship with a commitment ceremony performed by a Conservative rabbi from upstate New York. He was at risk of being kicked out of the Rabbinical Assembly for performing a same-sex marriage, but he knew Friedman well and did so anyway.

According to the Human Rights Campaign’s website, the Union for Reform Judaism adopted a resolution in support of civil marriage for same-sex couples in 1997. It took the Conservative Jewish community longer to accept, but by 2013, the Rabbinical Assembly released a statement in support of same-sex marriage.

“My mom wasn't able to attend our commitment ceremony, but she was very supportive and regarded Joan as a daughter,” Shimer said. “My dad passed away in 1991, before I had met Joan, but I'm sure he would have loved her.”

Ten years later to the day, after same-sex marriage was legalized in New York, the same rabbi performed a small, intimate marriage ceremony for Shimer and Friedman.

“The thing to understand is that there is a very, very, very ancient tradition in Judaism–going back at least 2000 years–of rabbinic interpretation. What does that mean? They never assumed that you could just take a text at face value,” Shimer said. This tradition has been applied to many of the Torah’s laws, from homosexuality to capital punishment.

“There's a passage in the book of Numbers where a man is caught gathering firewood on the Sabbath, which was prohibited,” Shimer said. “The elders go to Moses and say, ‘What do we do?’ and Moses asked God and God said, ‘Take him out of the camp and stone him to death.’”

“Even though (the ancient rabbis) believed it was the literal word of God, and they couldn't change any of it, through their interpretations they often end up dealing with what, even back then, they considered problematic texts. It was language. Language on its own is not always easy to understand.”

For those interested in reading further about rabbinic interpretation of scriptures on homosexuality, Shimer recommends the book Wrestling with God and Men: Homosexuality in the Jewish Tradition by Steven Greenberg, an Orthodox rabbi who came out as gay after struggling for years with his sexuality.

“As far as I'm concerned, his arguments are completely squarely within the tradition in terms of the way he's looking at the texts,” Shimer said. “He's not throwing stuff out. He is exploring exactly what does this mean, and where's the context? He does exactly what rabbis have done for thousands of years with the text."

Shimer is open to discuss this subject with congregants, too. “If they ever felt the need for some kind of special discussion like this question of, ‘How do you reconcile scripture with being gay?’ they know they could just reach out to me,” she said.

Over the last few years as Emanuel Jacob’s spiritual leader, Shimer has worked closely with families in her congregation.

“She’s still teaching in the Torah school, so she has more contact with the kids and the families that have children,” Hyman said. “She’s introduced practices that are more family oriented.”

In Mansfield, Shimer also does community outreach whenever possible. She has worked for several years with the Director of Pastoral Care at OhioHealth Mansfield and Shelby hospitals, Rev. Faith Proietti, to connect the local interfaith communities.

“We do a big interfaith thing every year for Yom HaShoah, which is the Holocaust memorial service,” Shimer said. “Unfortunately, this past spring we weren't able to do it because of COVID, but that always gets a really, really nice group of clergy from different churches and different groups.”

Given pandemic restrictions, Shimer, Hyman and other congregation members remain eager to discuss Judaism with the local community remotely. They prioritize educating others about their faith and are not motivated to convert anyone who approaches them with questions.

“Judaism is not a proselytizing religion. We do not believe that people have to be Jewish in order to be in good with God,” Shimer said. “We believe God made the world in such a way that he speaks to different people in different ways.”

“There's a lot of misinformation out there about Judaism. To the extent that people want to know, we are very happy to meet with people and make recommendations for resources or to serve as a resource."