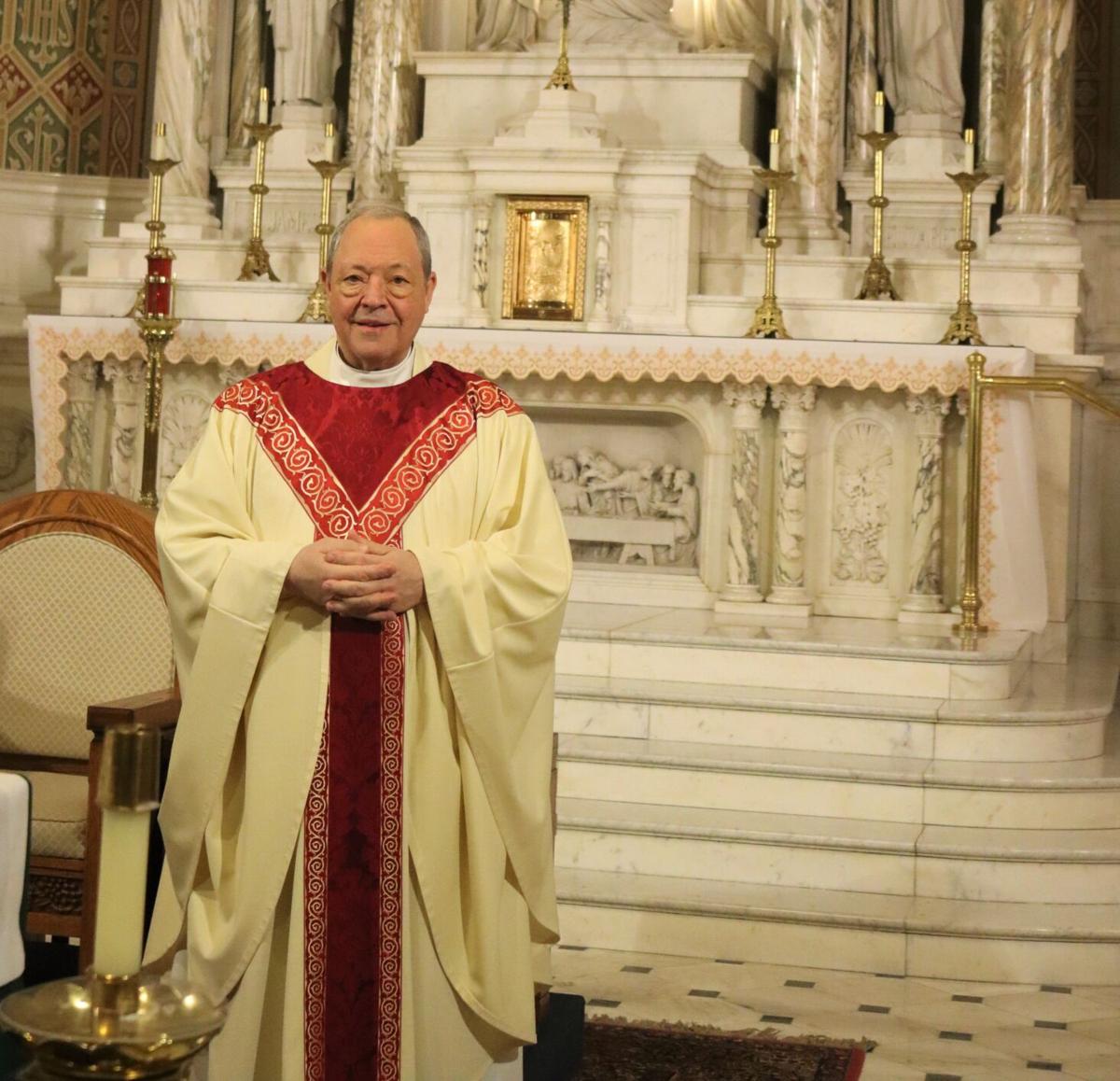 Rev. Gregory Hite has announced he will leave Mansfield St. Peter's at the end of June, after 10 years of leading the 175-year-old parish and school. (Submitted photo) 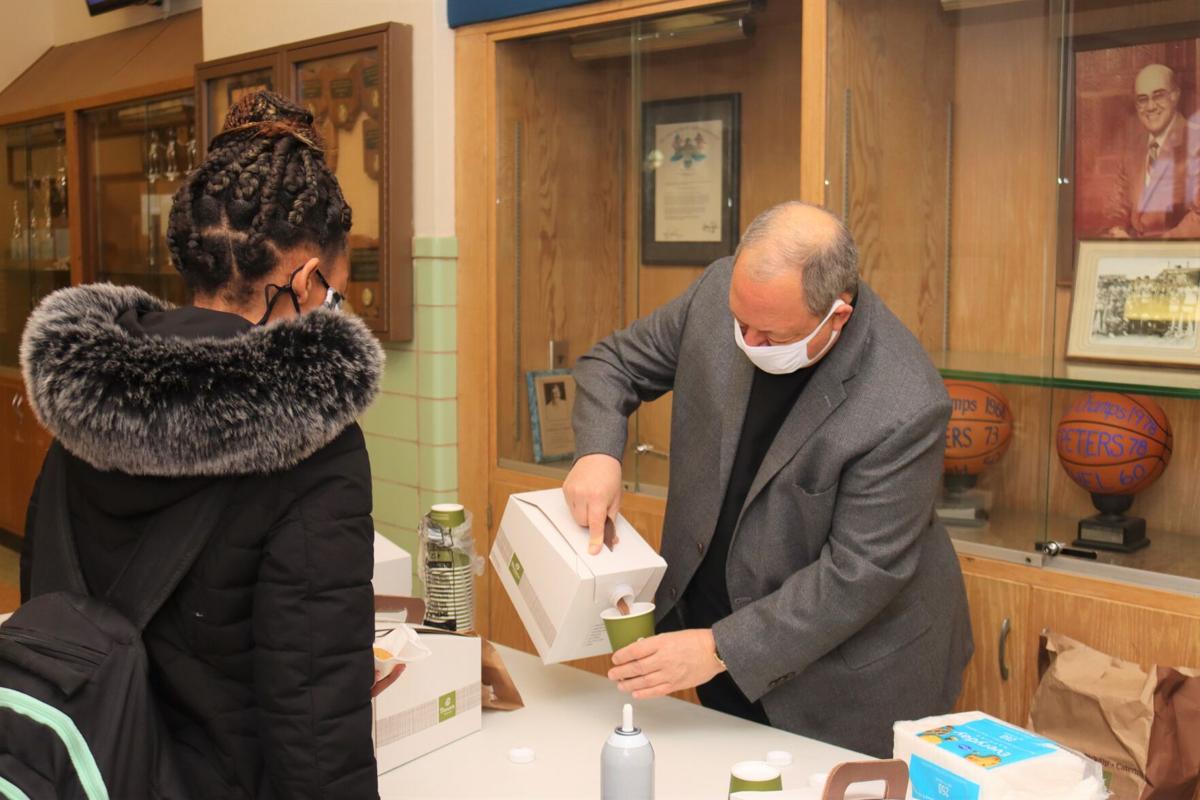 Rev. Gregory Hite pours cocoa for a Mansfield St. Peter's student during a recent event. Hite will enter "senior status" at the end of June, leaving the 175-year-old parish and school after 10 years of leadership. (Submitted photo) 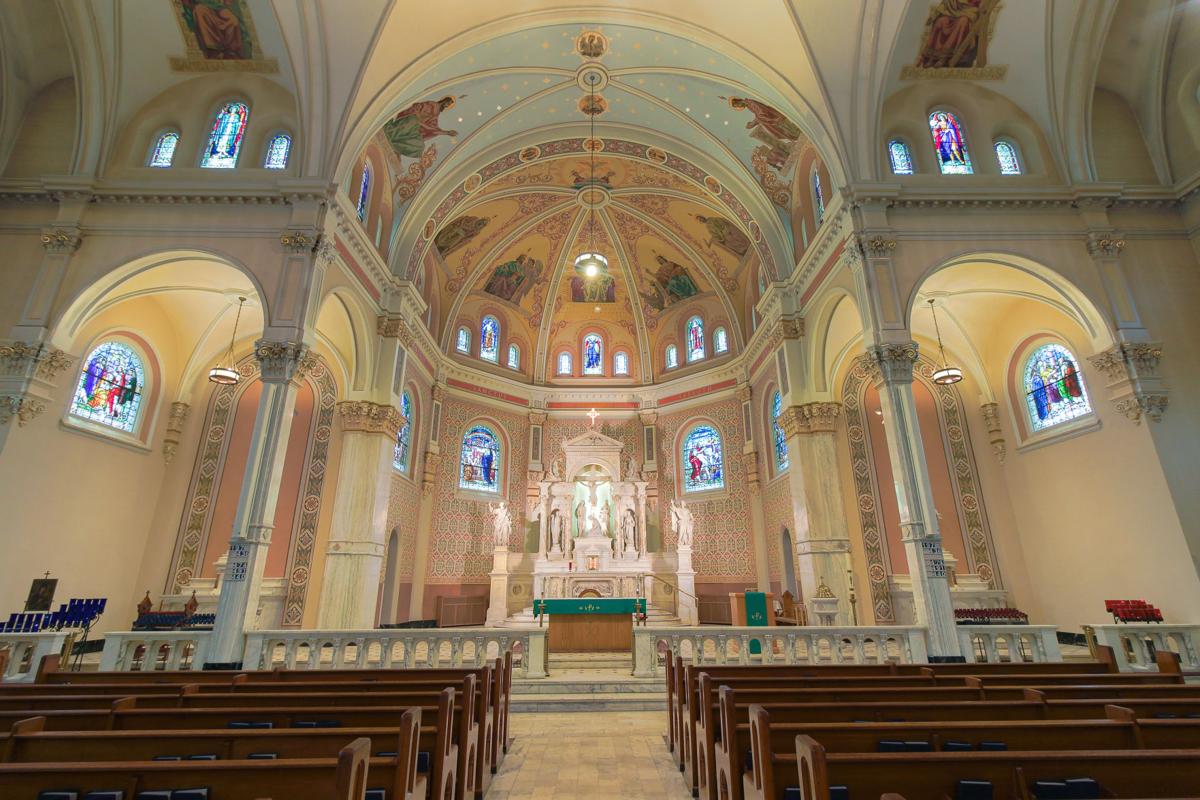 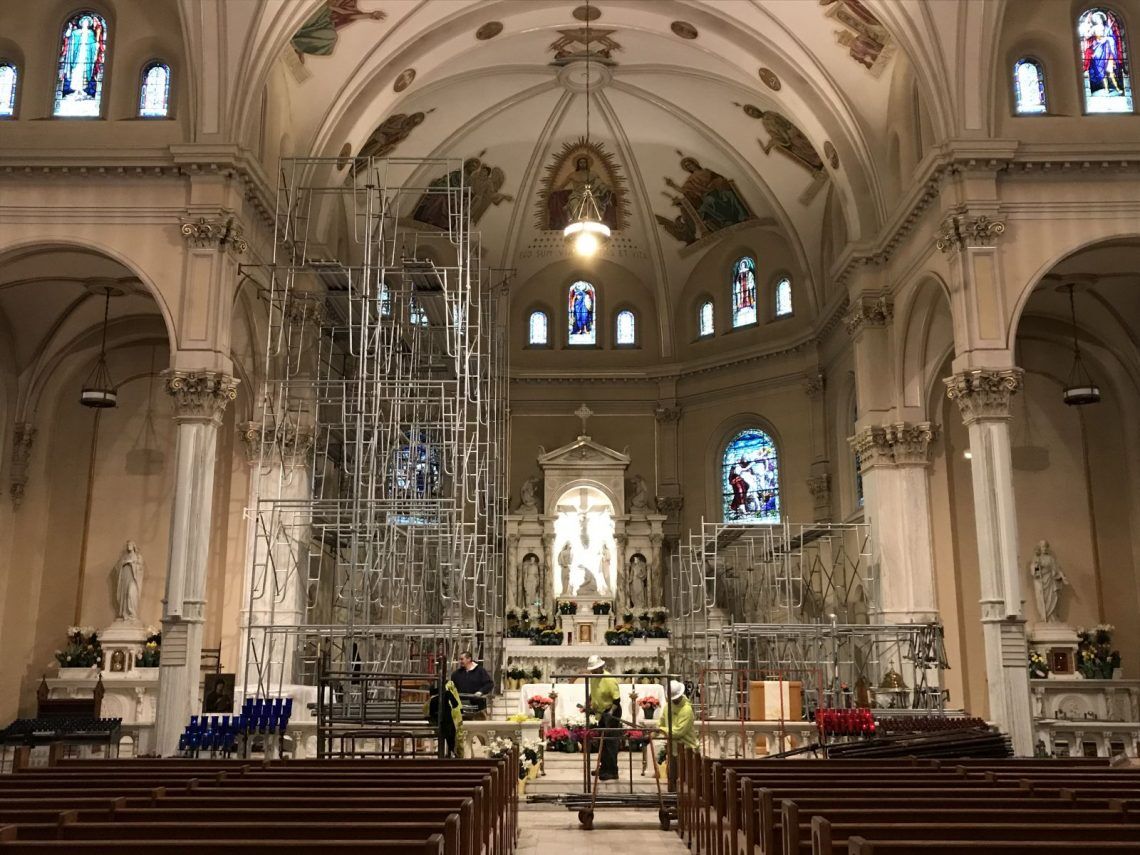 Services continued inside St. Peter's during the restoration efforts.

MANSFIELD -- St. Peter's Catholic Church was about $1.5 million in debt and badly in need of a physical facelift when the Very Rev. Gregory Hite became pastor 10 years ago.

The debt has been repaid to the Toledo Diocese and a successful $2.7 million capital campaign has fully restored the 175-year-old downtown Roman Catholic Church.

As he prepares to leave the parish and active ministry to enter "senior status" at the end of June, the 65-year-old Hite credits the dedication and devotion of parish members for the decade-long turnaround.

"Whatever I achieved here is a result of the commitment of the generous and sacrificing people here at St. Peter's," Hite told Richland Source. "There was a lot of pride in the history of our parish and they want very much to keep the faith alive."

Hite, ordained at age 26 and who will soon mark 40 years in the priesthood, said all he needed to do was be honest with parish members.

"I think the folks here responded (to paying off the debt) realizing that we had to do something now if we want to continue to survive. In faith, they made the sacrifice to keep the parish and ministries going (in the community)," Hite said.

The debt was paid off with parish donations, tough budget decisions and help from the Monsignor Dunn Foundation, named for the former Mansfield priest who died in 2012.

The capital campaign, named "Preserving Our Past, Preserving Our Future," was launched in 2015, utilizing the services of EverGreene Architectural Arts of New York City.

Hite made it clear from the start of the effort that the massive restorative effort would be a pay-as-you-go-effort. The plan was to spend no money until the parish had received it.

"I just kept trying to keep the people and the diocese informed every step of the way. We did not want to go into debt again," Hite said.

The work was floor to ceiling, including pews, stain glass windows, sound system, pipe organ and intricate work above the high alter and side walls that required massive scaffolding for months.

Masses and other services continued inside the historic church during the entire effort, the first significant renovation since a fire at the church in 1991.

"As I look back, it was important for me to continue to worship in the space where we were working," Hite said. "I wanted people to see how their donations were being spent, the work being done, seeing how their money was being used for beautiful things in their church."

Hite, whose four-decade career as a Toledo Diocesan priest includes five years as pastor at Mansfield St. Mary's on Ashland Road, said he was not surprised to see his parishioners support the work.

"One of the things that I have come to appreciate here at St. Peter's is a new meaning of the word faithful. Folks here are very supportive and they love their parish.

"We have people who show up Saturday at 5 p.m. for Mass, people with canes, who probably should not be out in the winter weather, but they are here. The Mass means everything to the faith, to their life," he said.

"I have never experienced (that commitment) at other parishes, not to that depth. It's not to say I haven't enjoyed other parishes, but the depth of commitment and the respect for the history and pride of the church ... it's a grace to have been associated with this community of faith for the last 10 years," Hite said.

The veteran pastor recognizes a church like St. Peter's and its towering twin spires is unlikely to ever be built again.

"I feel a certain responsibility to have maintained it because it really is the temple of God. What I tried to do on the inside was a create a sense of the grandeur of God, the majesty of God, a sense of transcendence that I am afraid many of young people will never understand," he said.

"When you walk in here, you are walking into another place, you're not in the world, you are crossing the threshold into sacred. With the gifts and support of the people of the parish, we have tried to capture and enhance that," Hite said.

The COVID-19 pandemic of the last 11 months has taken a toll on Hite, just as it has everyone in Ohio. Attendance at Mass has suffered and Bishop Daniel Thomas granted dispensation from attending weekly services.

Hite labeled as "divine intervention" that the capital campaign was largely complete before the pandemic roared into Ohio in March 2020.

"It has put a strain financially on us, and also from a psychological and spiritual standpoint. People are just tired of wearing masks and not being able to socialize. They are tired of not being able to hug each other or offer the sign of peace. I think that once we hopefully get back to a normal state of affairs people will be more comfortable in returning," he said.

"It's been the worst (experience of his career). One of the greatest concerns is when we get a sick call, we don't know if we're going to be able to get into the hospital or not, depending on what state they are in at that point. The most we can do sometimes is to call and pray with people over the phone.

"Weddings were delayed, but they are rescheduling in the hopes that spring and summer will be different. A young couple doesn't want to wear masks at their wedding," he said.

When he departs Mansfield in a few months, Hite will move into a parish in Rossford, invited there by Rev. Anthony Recker, ironically the first associate priest Hite ever helped to train.

The diocese has already asked him to fill in for a vacationing priest for two weeks later this summer.

"I don't think you ever retire from being a priest ... you're a priest forever. As long as you can continue to serve, if you're in decent health, I look forward to being able to do that. And I can do it without the administrative responsibilities, which is the nicest thing about it, really," he said.

Hite will preside over the occasional Mass, wedding and baptism. But it will be a slower pace, one that allows him to read, do some gardening and engage in deeper prayer.

"I am just looking forward to the opportunity of slowing up a little bit and taking a change of pace to re-energize myself," Hite said.

"I have minimal health concerns, but they're still concerns. I just want to make sure I continue to take care of my health. I am very grateful God has given me this opportunity."

And he will not miss the many administrative duties that come with pastoring a church the size and scope of St. Peter's, including his work as superintendent of the school.

"I think it's time for new leadership here at St. Peter's. I believe I have offered what I can," Hite said, who has been involved in Catholic education throughout his priesthood as a teacher, religion department chair and school principal.

Hite first served at St. Mary’s Catholic Church in Sandusky before pursuing graduate studies at the University of Dayton and at the Catholic University of America in Washington D.C. He then served as associate pastor and high school principal at St. Wendelin in Fostoria.

"I have always felt that the youth in our community need to experience the person of Christ, and that they be able to do it in different ways," he said. "Combining the theology and the education and teaching in the classroom was always kind of important to me."

"I think there are two challenges. I think there is a societal challenge. We live in an ever-changing society where the element of faith is at risk -- with our young people, with families, with the institution," he said.

"The other challenge is financially, to be able to continue to have and operate a school. Salaries and benefits are about 85 percent of our total costs and it doesn't get any cheaper.

"I think many families are forced to examine their priorities. For those who believe a faith-based education is very important for their families, they are here. If they feel that through their own example as parents, that their children can get the same faith formation, it's not breathing in that Christian atmosphere all day.

"Financially, some people cannot afford it. Ed Choice does give us an opportunity to open our doors even further, to embrace the children and the youth of our community here in Mansfield. We're fortunate in Ohio to be able to do that. Not every state has that kind of opportunity," he said.

Future of the church

Hite's move into senior status comes at a difficult time for all organized religion, including the Roman Catholic church.

"I think any pastor's challenge, and it's certainly been a challenge for me, is how do we attract more of our community back to the active practice of the faith? When I was growing up, there were some very clear rules. It wasn't a question of whether we were going to Mass ... it was which Mass are we attending?

"I don't think our society is better off for it ... the (decline) of the value of religion in our society. Nothing surprises me (anymore), absolutely nothing. I have said I am going to have that put on my headstone.

"In some ways, I am glad I am as old as I am. The younger priests are going to be serving in a very different church than what I grew up in. I don't feel that I have the gifts to be able to give to that. I will do what I can, but I was trained differently. I came from a different church, you know. And now there is a new paradigm.

"I suppose that's one of things that eventually led to my decision to retire. It's time for someone else to take on the leadership of this age. But if I can help out by having Mass, anointing the sick on occasion, doing a wedding here and there, I am happy to do that.

"But I need to get caught up in my own prayers. I have a lot of time to work on that before I go to meet the Lord."