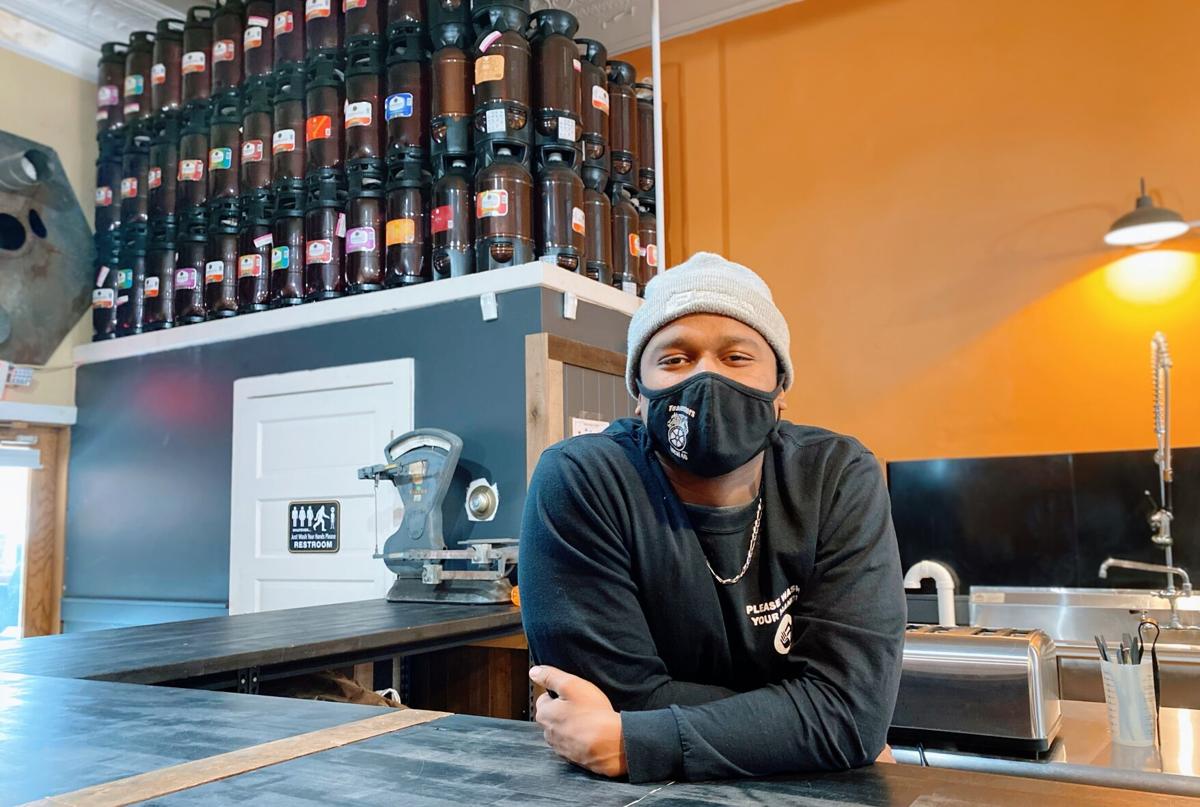 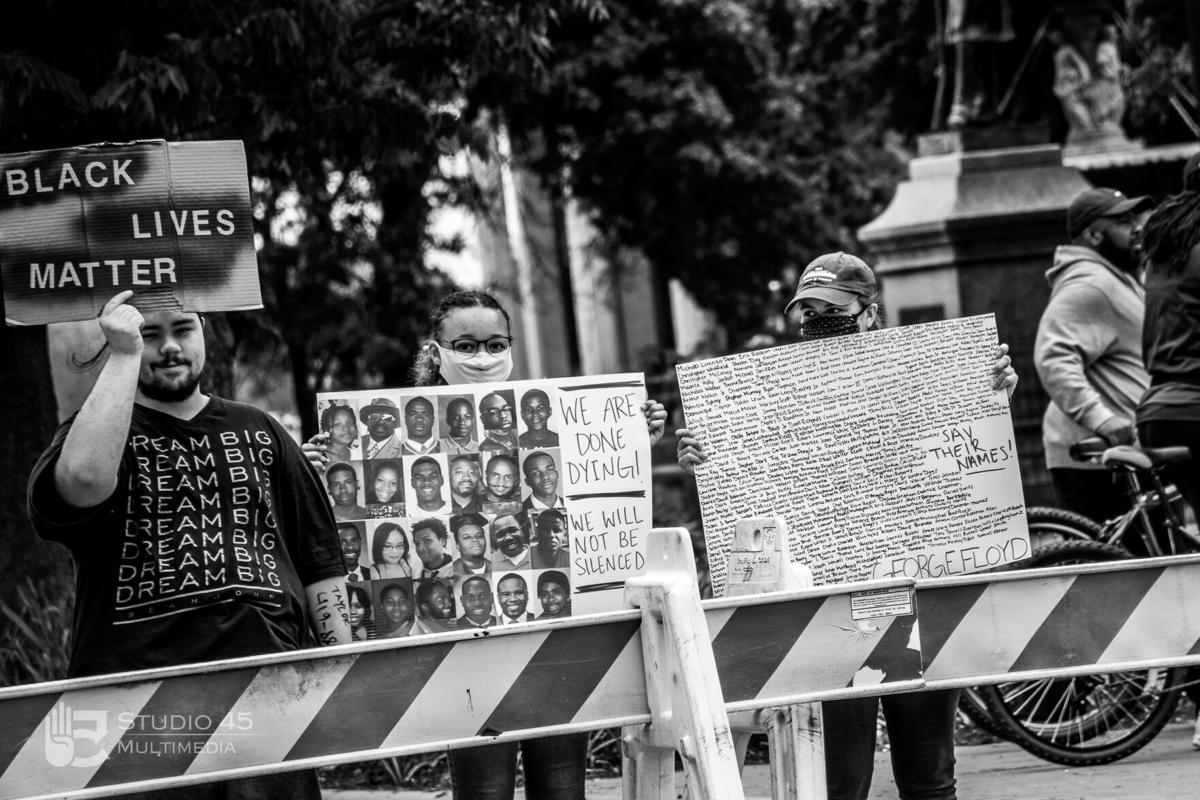 Daniels was amazed by the amount of work many protestors put into creating their signs. He believes the signs themselves are works of art. 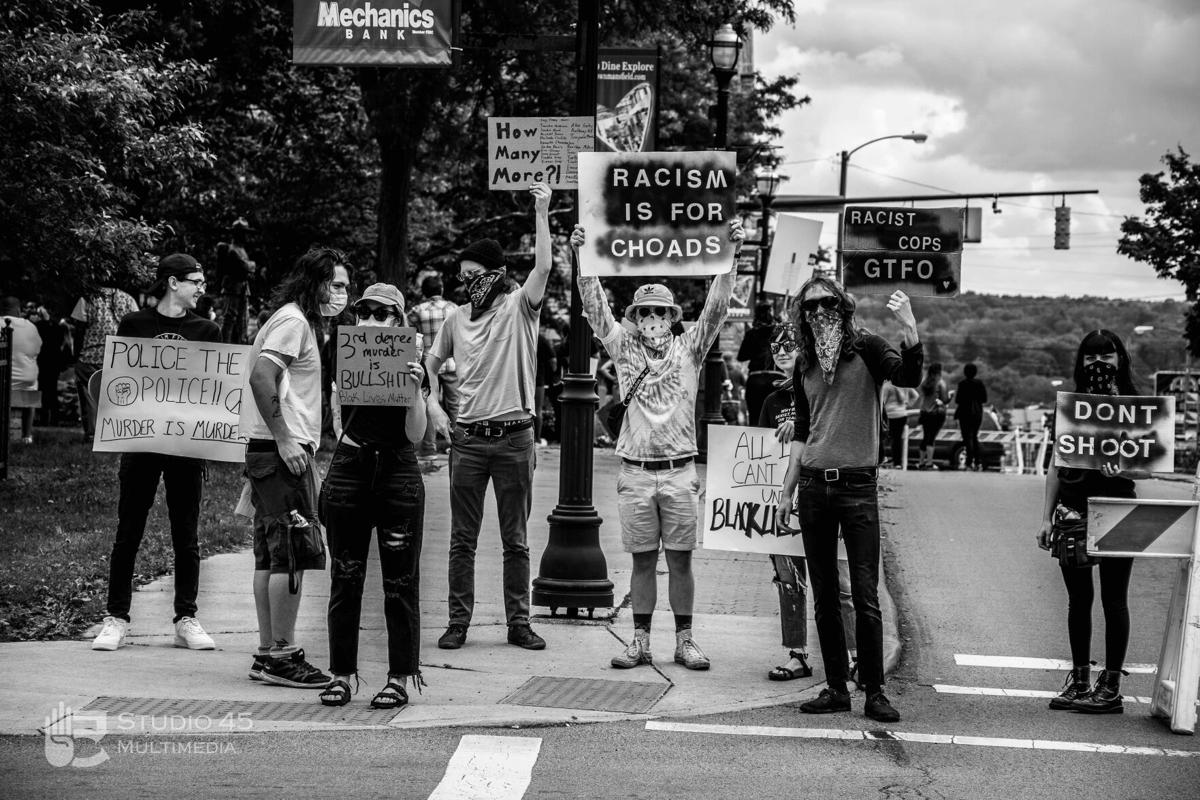 This is one of Daniels' favorite images from his Mansfield Black Lives Matter photo series.

MANSFIELD­ – Braxton Daniels III’s photography has been a staple to the Mansfield art scene for years, but his upcoming exhibit is different from anything he’s created in the past.

Behind the counter at 3rd Cup Tea, Daniels brewed tea and shared insights into his latest project, including why he hopes no future artist will ever need to repeat its message again.

Daniels’ Feb. 18 virtual exhibit for the Ohio State University at Mansfield, titled “Black Lives Still Matter,” will include images from 2020 Black Lives Matter protests in Mansfield as well as historical images from the American civil rights movement in the 1960s.

“The protests have died down, but it's not an issue that's been resolved in any way just because we're not hearing about it,” Daniels said, explaining his use of the word ‘still’ in the title. “Not only just Black lives, but human lives, and the human rights issue in general.”

By comparing images of the two movements separated by six decades of time, Daniels hopes his exhibit will foster productive conversation about the ongoing work toward racial justice in America.

“The comparison of the photos is just staggering. It seems like (the photos from the 1960s) were taken with the photos that I took. That's alarming,” Daniels said. “We're still here, fighting and battling the same fight, fighting the same war right now.”

This is Daniels’ first project aimed at addressing social issues, which has never been his style of work since he is an introvert who prefers to stay away from crowds.

The series of photos took him out of his comfort zone in terms of style and genre, too.

Daniels has only shot one other project in black and white. For “Black Lives Still Matter,” he made this stylistic choice to mirror the monochromatic tones of historical images.

This is also Daniels’ first experience with photojournalism. While some people write stories with words, he notes that is not a skill of his; instead, he uses his camera to write stories. This time, he used a camera to capture the unfolding story of an important historical moment.

“We hopefully never have to revisit the situation—hopefully we never again have to have a protest for awareness that the lives of African Americans matter,” Daniels said. “So, I had to take that opportunity. It was like a one-shot deal.”

“I think that's what photography is all about: still images capturing a moment.”

The Ohio State University at Mansfield’s Diversity and Inclusion Coordinator, Tiffany Mitchell, has worked with Daniels on art projects in the past, and she reached out to him about working together on creating this exhibit.

“We are celebrating Black History Month on campus, and I wanted to find a way to incorporate the art department,” Mitchell said.

“Braxton's artwork is phenomenal. He inspires a lot of people through his art, and his personality is amazing. He's very talented and his work definitely needs to be displayed, so any opportunity that I have to work with Braxton, I take advantage of.”

Some of Daniels’ favorite images from the exhibit are of white Mansfield residents holding signs at the protests. He notes one major difference from the 1960s images to those taken in 2020 is the presence of many more white people standing in support of the Black community.

On a personal level, Daniels has firsthand experience with the challenges of growing up as a Black person in America. He told a few stories about his own family, from Andalusia, Alabama.

“I went down the Carolinas and visited with (my grandpa), and he would share stories of what roads he had to take to get home. Different white people down in that city weren't too fond of him,” Daniels said.

“My uncle had to move from Alabama to L.A. because he was in love with the wrong person at that time. My mom traveled here, with one bag and my brother, just to escape down south.”

Daniels notes blatant and violent racism is less common in today’s protests than in the past—“People are not bringing water hoses out and siccing dogs after us,” he said—but he has plenty of stories about the challenges he and his little sister have lived with, from enduring racial slurs to extreme anxiety surrounding being pulled over by police officers.

More than anything, Daniels hopes the events of 2020 will help people to really delve into difficult conversations about race and unconscious biases. He recommends beginning with watching Emmanuel Acho’s “Uncomfortable Conversations with a Black Man” on YouTube.

“It’s bad, and it's not America—this is not our justice system at all, and it never should be. At the same time, how do we change that? How does the police force regain the trust of its citizens?” Daniels asked.

“I don't want a kid my age, in 20 years, to take these pictures. I think that's my biggest thing: we don't want to revisit this at all. I hope there's never another protest from a wrongful killing of anybody.”

“Generations from now, hopefully I can say, ‘Look, this is what we had to go through, and it's no longer an issue.’”

Daniels’ virtual art exhibit “Black Lives Still Matter” will be hosted by the Ohio State University at Mansfield on Thursday, Feb. 18, at 7:00 p.m., including a discussion with Ohio State art faculty John Thrasher and Kate Shannon. The public is welcomed to join through this link.