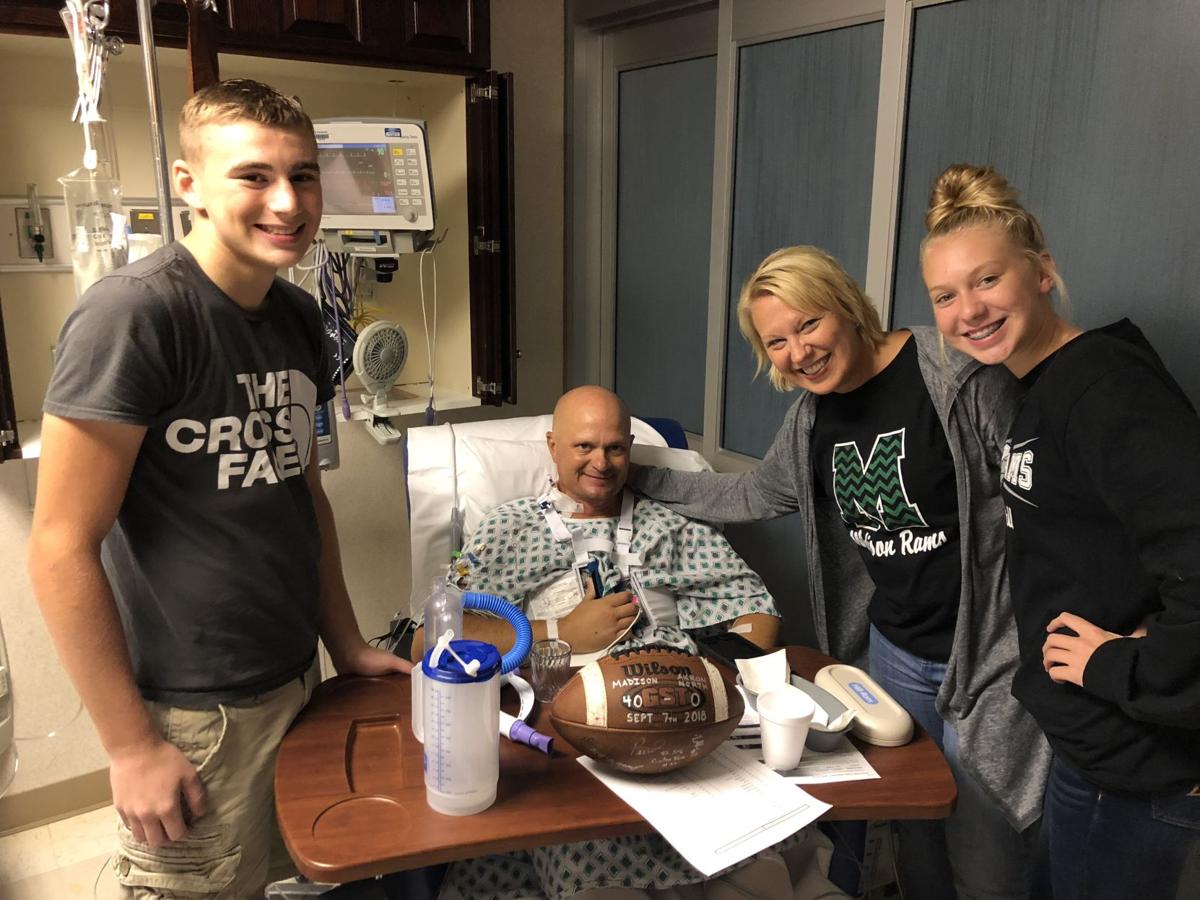 Jeff Barrett recovers from his emergency surgery with his family by his side. 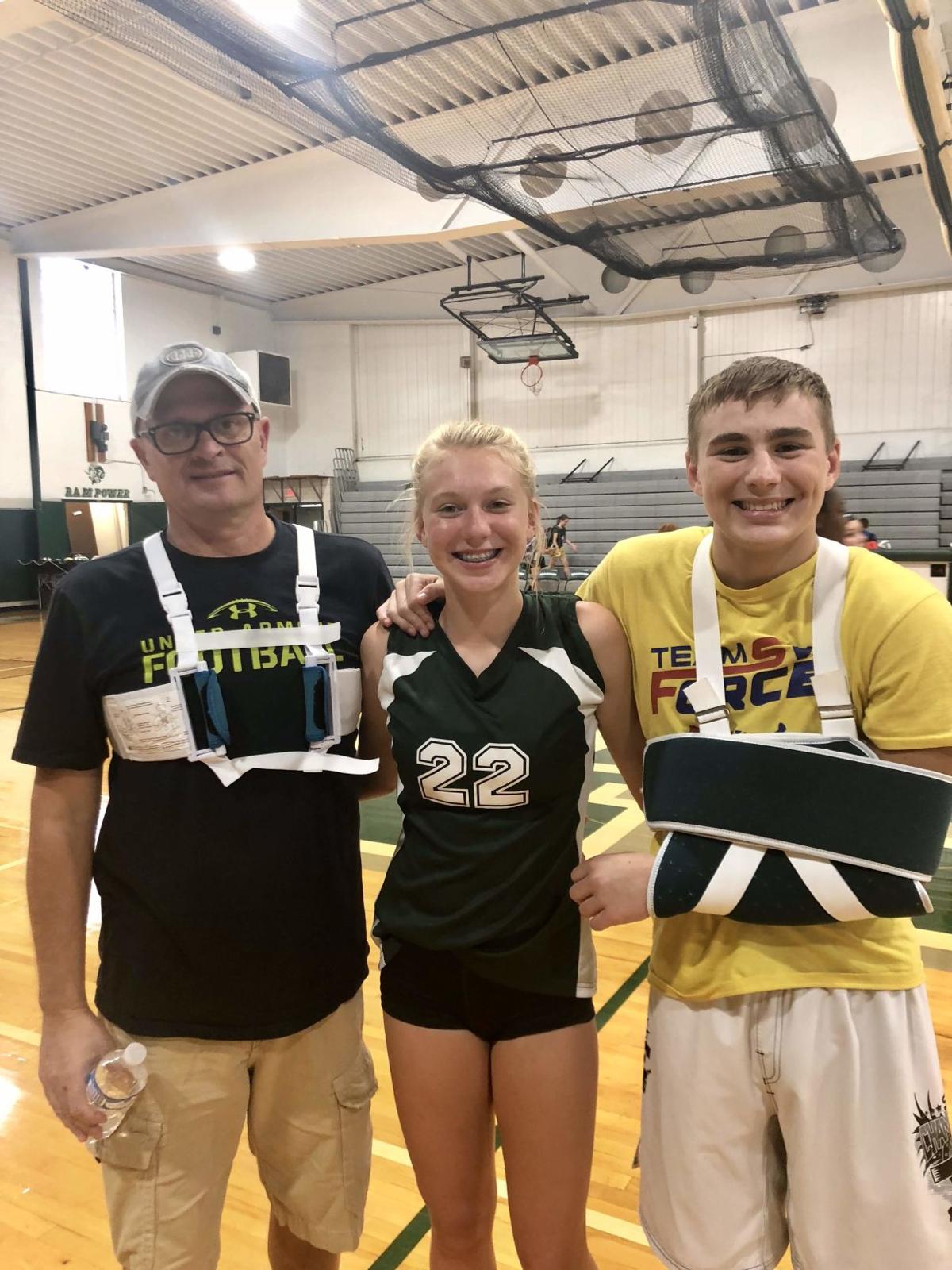 Jeff Barrett attends his daughter Hope's volleyball game along with his son Nate after an emergency aortic dissection that placed him in the hospital for two weeks. 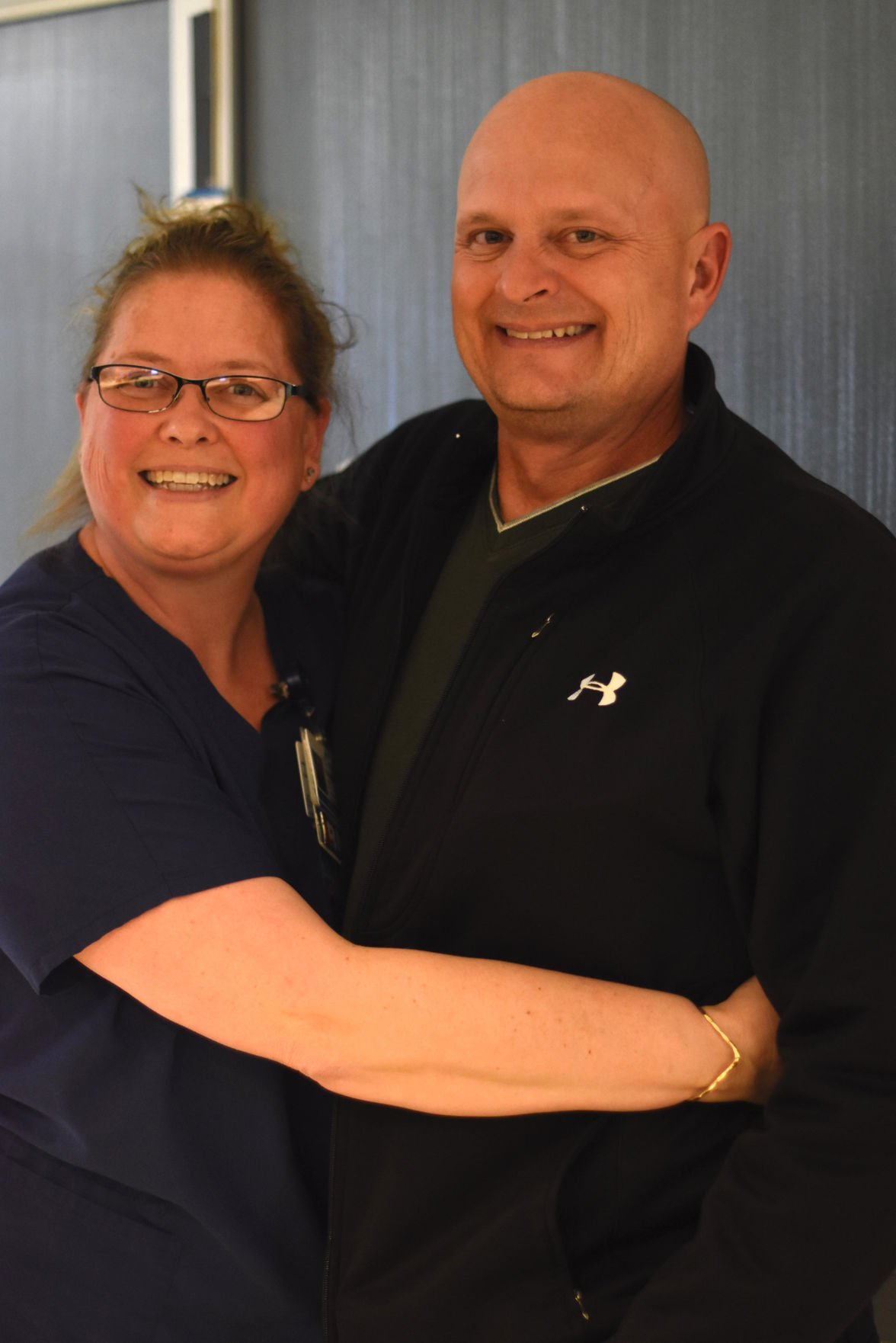 Pamela Snow, a registered nurse, aided Barrett in his recovery after his surgery. 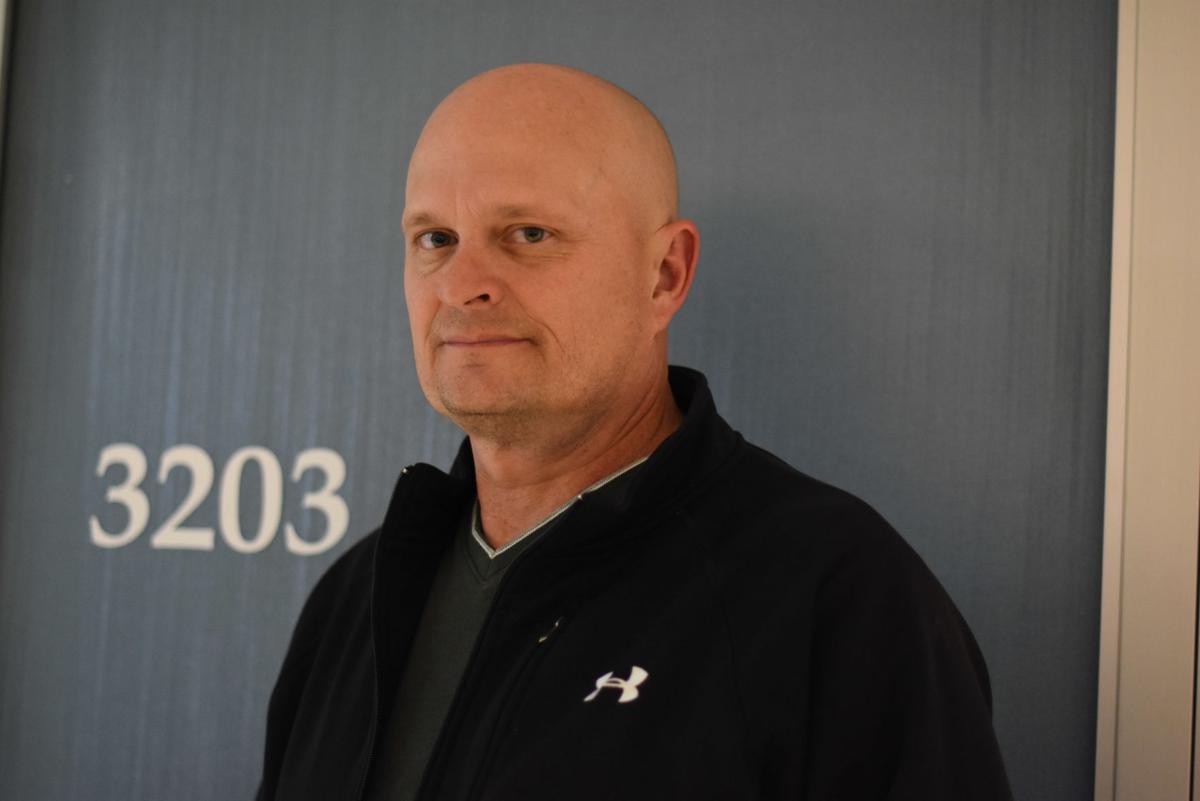 Jeff Barrett stands in front of the same room he occupied while staying at OhioHealth Mansfield Hospital.

MANSFIELD - On Sept. 4, 2018, Jeff Barrett was rushed to OhioHealth Mansfield Hospital by his wife after a sleepless, sick night.

What they thought was the flu turned out to be far worse than they could have imagined.

After getting to the hospital, Barrett proceeded to have intense chest and back pain.

Thoracic surgeon Dr. Jose Norberto, MD started working at OhioHealth Mansfield Hospital a month prior and had just returned home late at night from a trip he took overseas. When he received a call from another cardiologist about needing an assist on a patient, he quickly jumped into action.

Together, Norberto and his team did not have an initial diagnosis for Barrett since he only presented with chest pains, but after sending Barrett through a CAT scan, they discovered he had an aortic dissection—a tear in the inner layer of the large blood vessel branching off the heart (aorta).

“Most people don’t even make it to the hospital. That’s how serious it is,” Norberto said.

An aortic dissection is dangerous because it can leak outside of the vascular system, which could potentially lead to death from bleeding, as well as affecting the function of the heart by blocking the coronary arteries or the function of the aortic valve.

“That’s one of the most difficult and dangerous emergencies that we, as cardiologist surgeons, have to face once in a while,” Norberto said.

After that discovery, Norberto told Barrett and his wife, Robin Barrett, of the severity of the issue, and Mr. Barrett agreed to proceed with an emergency operation.

Although Mrs. Barrett grew reasonably concerned, Norberto and his team put her at ease by walking her through the entire procedure and giving her updates throughout the surgery.

“It’s just a whirlwind of emotions, but it was definitely a terrifying experience having it happen, but we were very blessed to have Dr. Norberto and his staff because he’s a priceless human being,” she said.

“I know surgeons sometimes get a bad rap, but he’s not one of them. He’s unlike any other surgeon I think I’ve ever met. He’s just a good guy.”

Normally 2,000 aortic dissection procedures happen every year in the United States, which Norberto had only seen and performed 25-30 times in his career, and with an 80% mortality rate, there was no room for error.

“What happens is that, because of the weakness in the aorta—which is the biggest artery of our body coming out from the heart—there is a tear that occurs that allows blood to get inside the wall of the vessel,” Norberto said.

“It’s like if you have a pipe that breaks inside the wall of your house and then you have water in places there shouldn’t be.”

Norberto and his team needed to do a tricky and complex maneuver where they had to accomplish replacing the area where the tear occurred and redirecting a blood clot back to the center of the vessel.

The weakness of the aorta can make it difficult to sew, according to Norberto. What he ended up having to do was use a dacron graft—a tube in procedures in order to sew the aorta—to attach two ends together: the proximal end, which is closest to the heart; and a vessel that goes to the brain (the trickiest part).

In order to do this, Norberto and his team had to stop circulation completely by placing Barrett under hypothermic circulatory arrest, lowering his temperature to 17 degrees Celsius in order to sew without the risk of blood getting in their line of vision.

“It’s basically as close to death as you can be without being dead,” Norberto said.

Barrett, who’d been heavily medicated and lacked awareness after his CAT scan, woke up after a few days of being in a medically induced coma and had no idea where he was. All he knew was that he survived.

“This is such a dangerous condition in any patient that they become very sick after surgery, but he did well,” Norberto said.

Barrett started cardiac rehab after his recovery. Prior to his aortic dissection, he was in great shape and known as the guy who could carry everything, according to Mrs. Barrett. With new limitations placed on him, he quickly realized he couldn’t move as fast or do the same things he previously could.

During a six month check up, blood clots were found in Barrett’s lungs, leading to him having to spend another couple of weeks in the hospital—coincidentally enough in the same room he first stayed after his first procedure. This time, though, he was cognizant of everything.

“In a way it was kind of a blessing because I got to actually be in good health and talk to everyone in the ICU,” Barrett said.

One year later, Barrett is back to living his life, continuing to be an assistant coach for Madison High School, eating healthy and keeping his blood pressure under control.

“I think he takes absolutely nothing for granted,” Mrs. Barrett said. “I feel like it’s a second lease on life and he definitely is taking full advantage of that.”

The Barrett family previously dealt with another life threatening issue when Mrs. Barrett was diagnosed with cancer, which she luckily survived.

“From my ordeal to his, we have this huge support group of human beings in Mansfield, Ohio,” Mrs. Barrett said.

Going through both of their life-threatening experiences, the Barrett family received an enormous amount of support from the Mansfield community. Barrett couldn’t recall a day where no one visited him.

Pamela Snow, a registered nurse who also knew Barrett because her children attend Madison High School, spoke highly of him with tears in her eyes and a lump in her throat.

“It was an absolute pleasure to watch Jeff come (into the hospital) in the condition he was in, go through surgery and the recovery process,” Snow said. “To watch him walk out of here, unfortunately to have to come back, but then able to walk out again with renewed life—being able to see him on that football field, on the softball field, is wonderful.”

Norberto commends the Barrett family for their strength and said he’s grown close to them. Since Barrett’s procedure, he’s had to do the same procedure again within the same year, which also came out successful.

“This is an operation that we know how to do; we have experience with it, but we don’t advertise it because it’s a big deal. And if I don’t have to do this ever again, I’m fine with it—that’s how intense it was,” Norberto said.

Unlike Barrett, who had a ton of emotional support and love from others, the other patient didn’t have that same kind of support. Barrett was contacted by an OhioHealth employee who asked him to come and offer some advice and encouragement to the patient.

Norberto said the success of Barrett’s operation came from teamwork and efficiency even though he hadn’t worked at OhioHealth Mansfield Hospital that long.

“Being able to operate with a team that was just getting to know me, it was very reassuring, and that made me very pleased and very happy with the organization,” Norberto said.

Having grown closer to the family since the surgery, Norberto said it was a special pleasure to get to know them.

“They are such a nice family in this community and it was nice to meet them and be there for them,” Norberto said.

With his second chance of life, Barrett does not plan on wasting it and remains indebted to the team that gave him the chance to live to see another day.

“It’s awesome; blessed,” he said about his life, a hint of emotion behind his voice. “Those people are my heroes. Every one of them.” 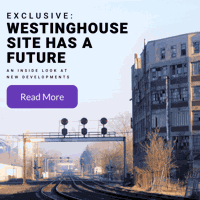