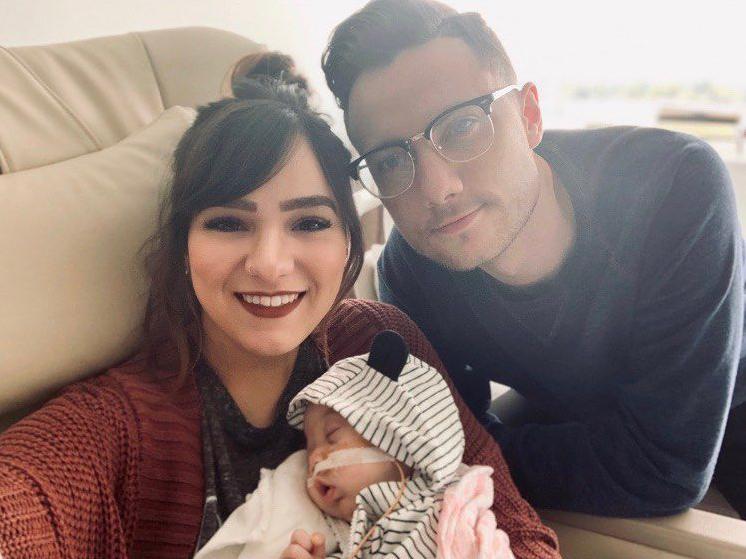 Talon and Jordon Baker smile with their daughter Ophelia. 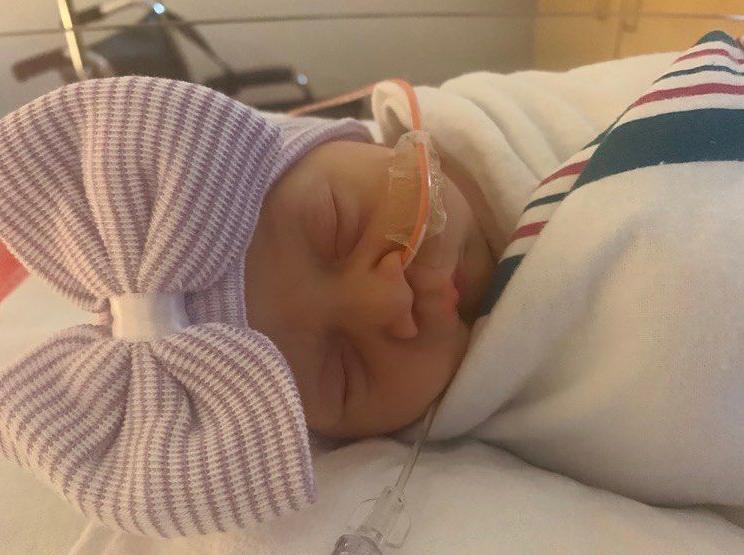 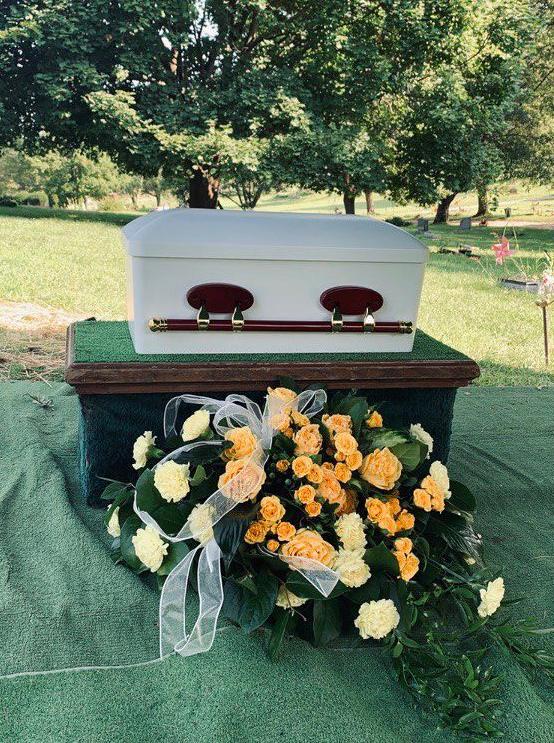 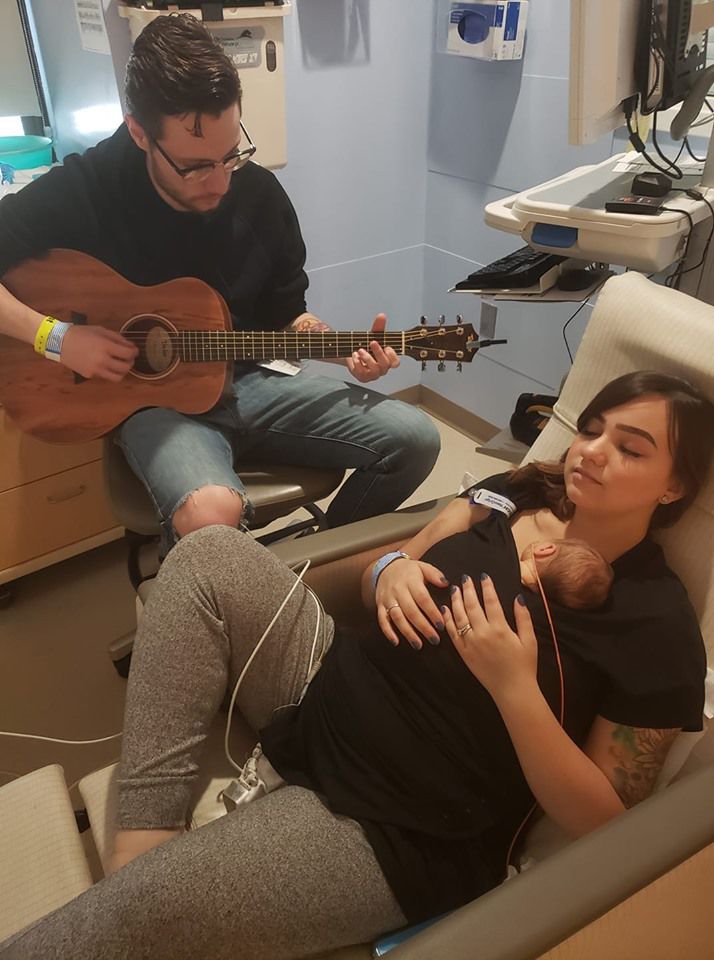 The Bakers sing worship songs together in Ophelia's hospital room. 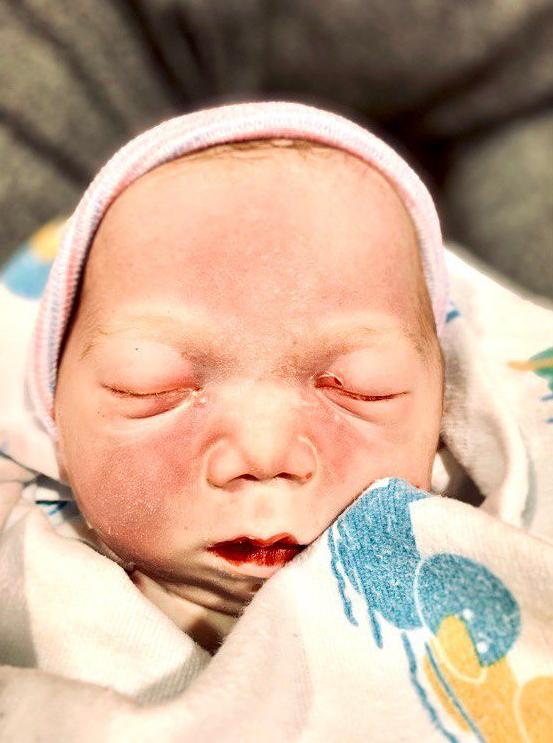 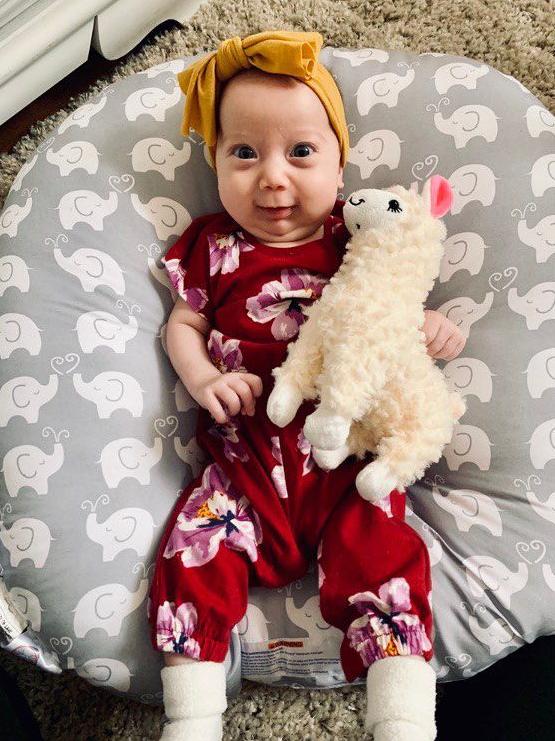 “Each new life, no matter how brief, forever changes the world.” — Author unknown

MANSFIELD — Jordon and Talon Baker are determined to keep the story of their little girl, Haddie Wren, alive.

The Mansfield couple believes it would do more harm than good to hide it.

“We don’t want to be ashamed of sharing her story or the impact of her life just because she’s not here with us now,” Jordon said.

Haddie was born stillborn on July 15, 2019. Talon was 38 weeks along in her pregnancy with twin girls.

Just days before her scheduled delivery, Talon noticed Haddie wasn’t moving around in the womb.

Using a fetal doppler that she had at home, she said she was able to pick up two different heartbeats, which alleviated some of her fears — that, and knowing she was scheduled to see the doctor the next day.

During her appointment, the doctor was able to find Ophelia’s heartbeat, but had trouble detecting Haddie’s. He encouraged Talon to go to the hospital, where she was hooked up to a monitor to record the babies’ heartbeats.

“The machine was like right next to my head so I couldn’t exactly see it, but I was sitting forward a little bit and I saw them pick up Ophelia’s heartbeat, and then when they put the ultrasound on Haddie, I saw just a flatline,” Talon recalled.

Doctors proceeded with an emergency c-section. The umbilical cord was wrapped around Haddie’s neck four times.

Following the surgery, Talon underwent a blood transfusion — before having the chance to hold Ophelia, who was transported to Nationwide Children’s Hospital because of health complications.

Ophelia spent the next 70 days in the NICU at Nationwide. Ophelia was born with Pierre Robin sequence, a condition in which the infant has a smaller than normal lower jaw (micrognathia), a tongue that is placed further back than normal (glossoptosis), and an opening in the roof of the mouth (cleft palate), according to the National Institutes of Health.

During her stay in the NICU, Ophelia underwent two tongue-lip adhesion procedures for the management of airway obstruction. She is slated to have the surgery reversed at 8 months old. She will also have cleft palate surgery when she’s 15 months old.

The Bakers praised the care that they had been given at OhioHealth Mansfield Hospital, Cornerstone OB/GYN and Nationwide Children’s Hospital.

They were happy to report that Ophelia, who will turn 3 months old on the 15th, is adjusting well at home.

“We couldn’t have asked for it to go better,” Talon said.

She described her daughter as smiley, sweet and feisty.

“When she’s hungry, she lets you know,” she said with a laugh.

When the Bakers announced the delivery of their daughters on social media, they accompanied their post with an image that had the phrase, “He is faithful” written on it.

Through this journey, the Bakers have trusted in the Lord, believing that He’s good all of the time — even in hardship.

“We have never blamed God throughout this whole process, and we’ve never felt like He took her from us,” Talon said. “We both felt like God was grieving as well. He was going through the same emotions that we were, and I think that was one of the things that made us feel really, really close to Him.”

Although it’s hard not to ask why or how this happened, the Bakers have tried not getting fixated on those questions.

“I think that kind of thinking leads to so much disappointment, frustration, and confusion. And really for us, ultimately what we have to trust in is that He is good. This happened, and there’s nothing that we can do to make it not happen, but we trust that He’ll make something beautiful out of it,” Jordon said.

Already they’ve seen what an impact their journey has had on others — some who have been in similar situations said it’s helped them grieve, while others have said it’s brought them closer to the Lord.

Two verses that have stood out to Jordon through all of this are Romans 8:18 and 2 Corinthians 4:17.

“Both of those talk about how our light and momentary sufferings will pale in comparison to eternal glory,” he said.

He admitted, “It’s super hard to keep that perspective sometimes, but we find ourselves wandering back to it and then it feels okay again.”

Peace that surpasses all understanding

While Ophelia was being treated in the NICU, Jordon and Talon were right there with her, spending 12-15 hours each day in her room — which wouldn't have been possible, they said, if it weren’t for the Ronald McDonald House, which provides a place for families to call home so they can stay close by their hospitalized child at little to no cost.

Together the couple would sing worship songs and praises to God in the hospital room.

“Every day that we were in the NICU, I had my guitar with me and we would be worshipping, and we would have this tension of experiencing supernatural joy in a time when we shouldn’t be experiencing joy,” Jordon said.

“I have peace today. I’ve learned that God’s presence is attracted to brokenness. He has and always will be my comfort, in the good times and the bad.

“The Lord reminded me this morning that my girl is more alive than us that are still on this side of eternity. Jesus is taking such good care of her, I trust Him to be as good of a friend to her as He’s been to me.

“As I was walking up to my house, a little brown bird flew right past my face and perched itself on our fence. It let me come up and place my hand by its feet. I think that was God's way of telling me that my little Haddie Wren (wren means songbird) will always be watching over us.”

The Bakers always envisioned their daughters would be in some form ministry, and though Haddie never had the chance to minister to and serve others herself, her parents believe her story will reach people in a way that’s life-changing.

“We’re very adamant in sharing about Haddie,” Jordon said. “I believe that she is more alive than the rest of us.”

October is Pregnancy & Infant Loss Awareness Month. In 1988, former U.S. President Ronald Reagan declared October as a month to recognize the unique grief of bereaved parents in an effort to demonstrate support to the many families who have suffered such a tragic loss, according to Star Legacy Foundation.

“I would love, if anything, that sharing this story...(encourages) other parents to share stories of their babies that they have lost because there seems to be such a stigma, or an angst or awkwardness of sharing about babies who have passed,” Jordon said.

“For us, at least, it would do us more harm not to share about her.”