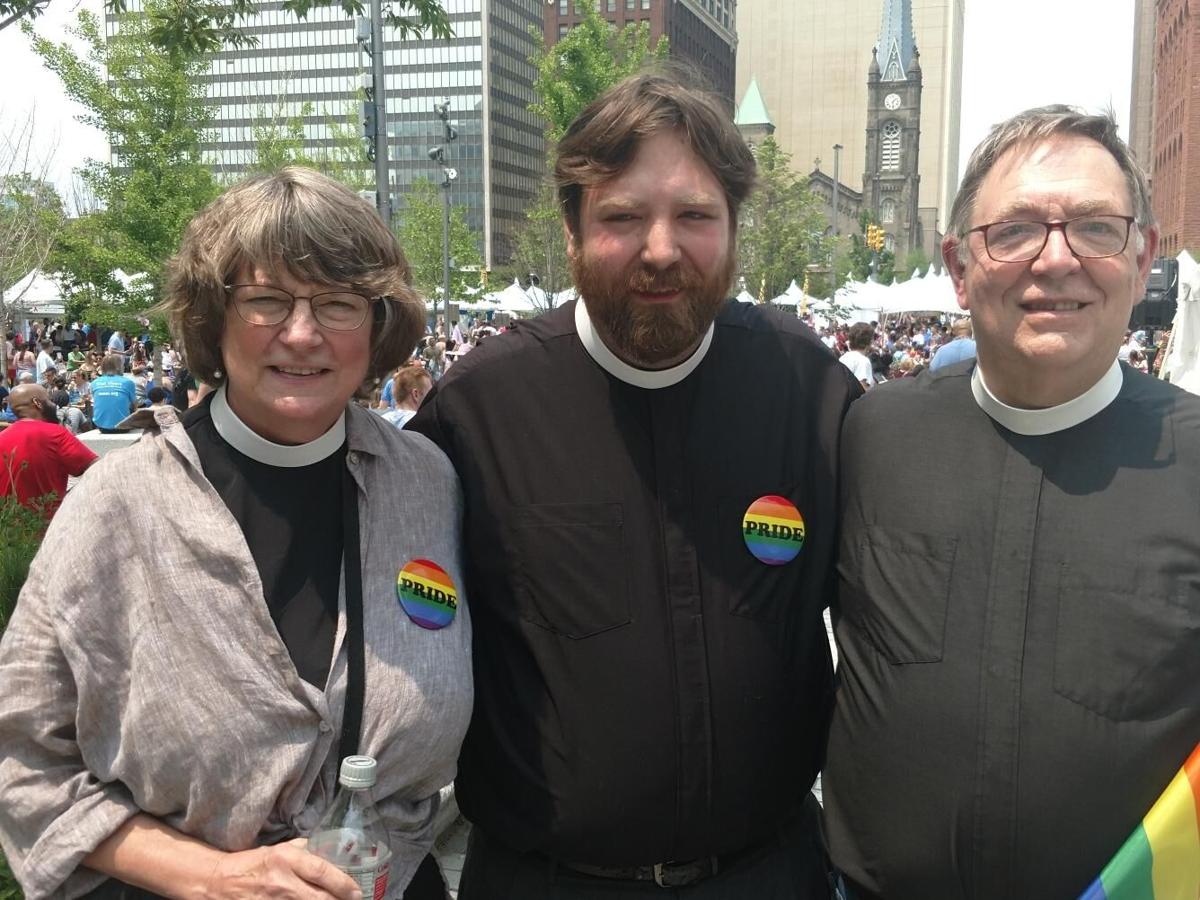 Kay and Joe with their son, Stephen, at Pride in Cleveland on the afternoon of Stephen's ordination. Stephen is the priest in charge of the Episcopal Church of the Good Shepherd in Lyndhurst. 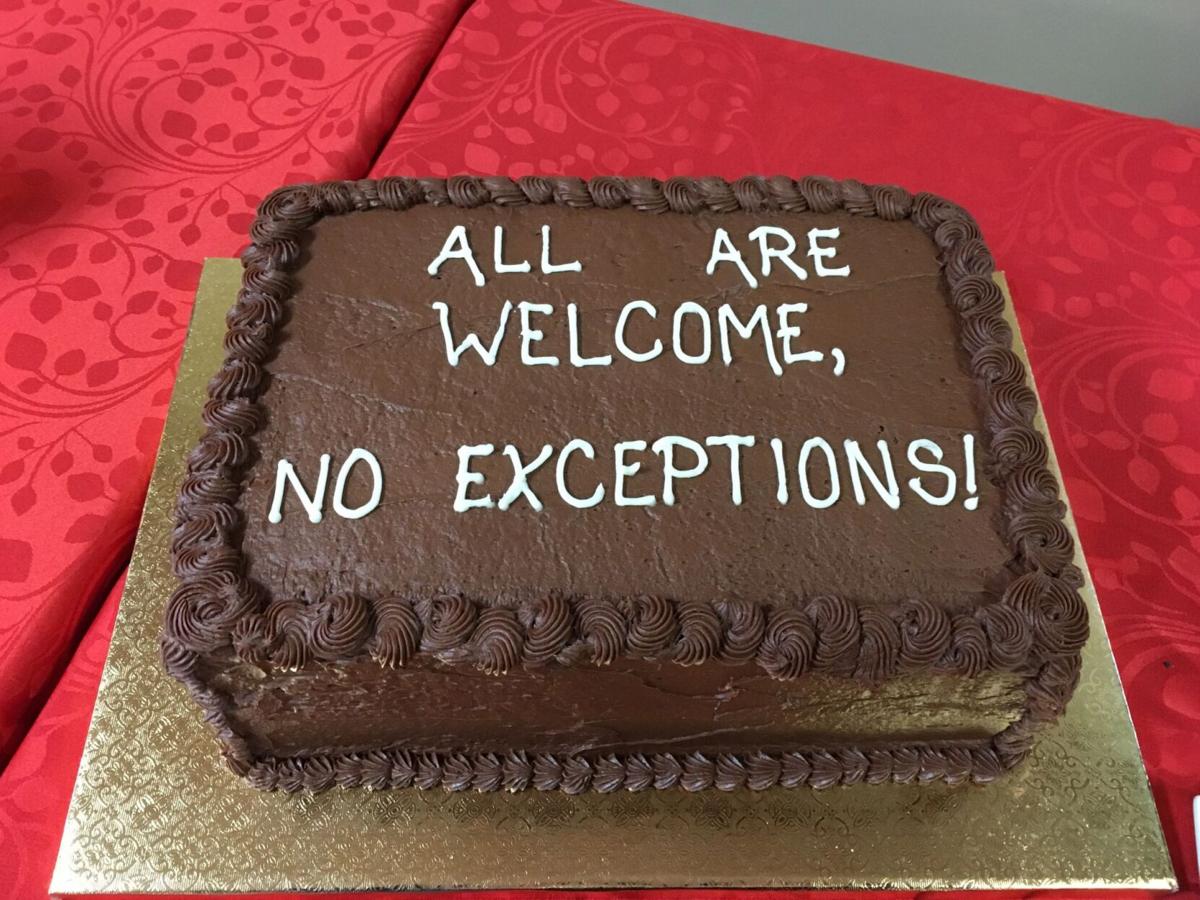 A cake with "All are welcome, no exceptions!" written on it. 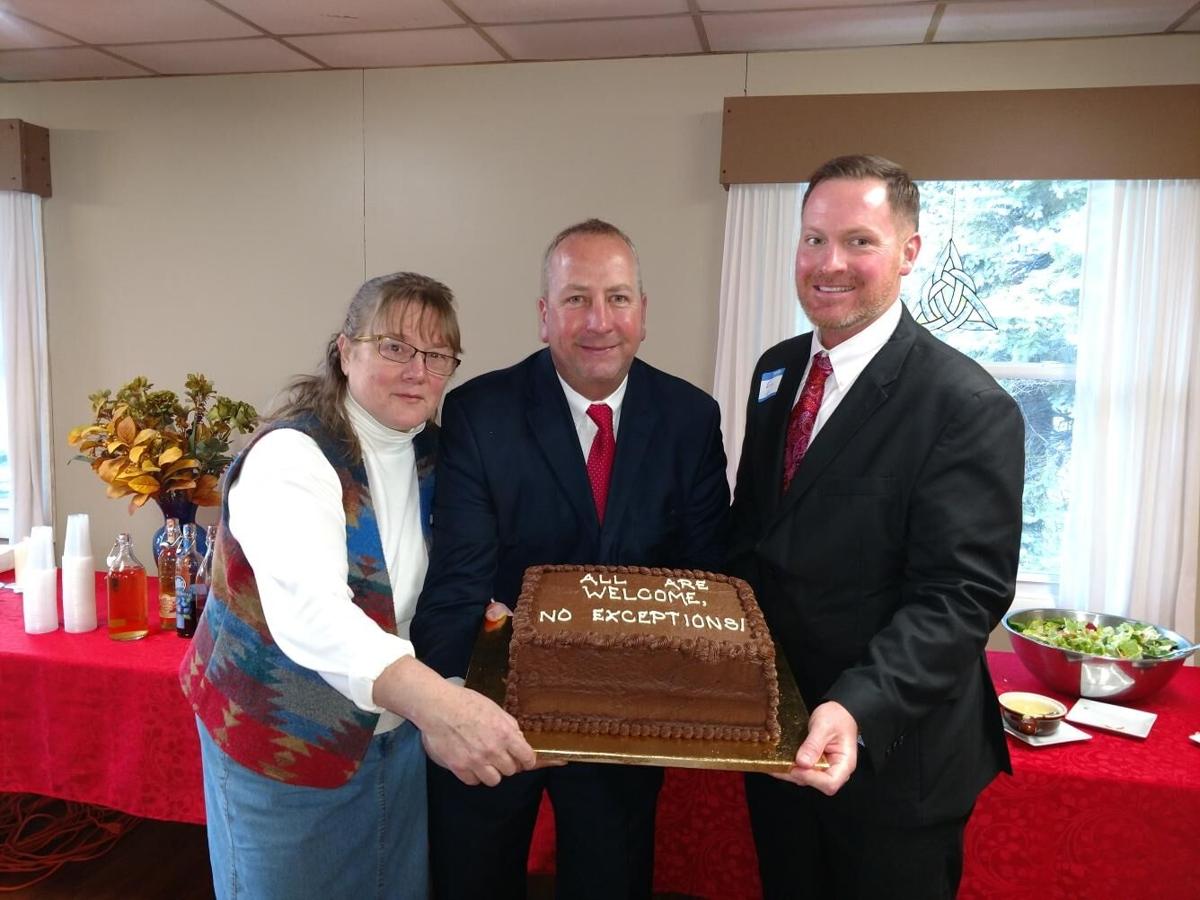 EDITOR'S NOTE: This story is Part I of an ongoing series about LGBTQ people and their allies in local religious communities. The first in the series features Episcopalian priests from Mansfield and Ashland offering an inclusive message to LGBTQ people who have been hurt by religious rejection.

MANSFIELD – Next March, Joe and Kay Ashby will celebrate 40 years of marriage. Like most couples, they have not agreed on everything over the years, but one thing they have always been in agreement about is the inclusive love of God—no exceptions.

The Ashbys, who are both Episcopalian priests, want members of the LGBTQ community who have been hurt by religion in the past to know two things: “We’re sorry, and that was the church. That was not God.”

“We’d love to be a place where people who have been hurt by the church can hear a message of God’s love and we can begin the healing process,” Joe Ashby said. “It is so hurtful to see people destroyed by that which should affirm their personhood.”

Although the Episcopal Church began ordaining women to the priesthood in the late 1970s, Kay Ashby had to go through three dioceses and nearly 10 years passed before she was ordained, almost a decade after her husband. Her experience prompted both of them to notice others who are treated differently simply because of who they are.

As the Ashbys witnessed gay candidates for the priesthood who were denied ordination, it sparked empathy in them. They remembered how Kay had felt when she experienced gender barriers while waiting to be ordained, and they said, “Wait a minute. Why are they experiencing what we went through?”

The couple delved in to better understand scripture regarding homosexuality. “Language is not the same always, and (there were) even socio-political reasons for some of the questions around homosexuality, particularly in the Old Testament. So the scripture is not as monolithic a statement as it might have been considered in the past,” Joe Ashby said.

In September 2006, Joe Ashby was called to be rector of Grace Church in Mansfield. Prior to their arrival in the area, the church had lost some members due to disagreement about accepting openly LGBTQ people.

Fourteen years later, the Ashbys have witnessed some increasing understanding and acceptance for LGBTQ people locally. They believe societal change and growing familiarity have both played a role.

“As more folks have come out of the closet… people have gotten more used to it and actually found they probably knew someone they didn’t realize (was gay), that they were real folks,” Joe Ashby said.

However, Kay Ashby recognizes that LGBTQ people still do not feel welcome in a lot of local churches. Seven or eight years ago, St. Matthews added clear, supportive language to their website. “We have to go by what we believe,” she said.

“(Acceptance) didn’t happen overnight,” Joe Ashby said. “The day that the Supreme Court passed same-sex marriage, our national convention was meeting, and it was at that moment that they stopped and voted to affirm same-sex marriage. It wasn’t until then that we actually put it officially in our canon for the whole church. So it’s been a long struggle.”

Although they lost members over this issue in the past, recently, members have joined their churches because of the inclusive atmosphere. “Most people we have gained in recent years are families [with] gay or lesbian children or gay and lesbian people,” Kay Ashby said.

Mansfield resident Bobby Rhea began looking for a local church about three years ago. He sought a traditional feel for worship and an open, inclusive atmosphere. He called Grace Church, and Joe Ashby answered.

During that first conversation, Rhea learned about the Episcopal Church’s progressive support for the LGBTQ community, people of color and women’s rights. “That’s what drew me in,” Rhea said. He has attended Grace Church ever since.

Ron Sermak and Eric Jones moved to their Cinnamon Lake home in 2016. Soon, an internet search brought them to St. Matthew’s Church in Ashland. “It was the only open, affirming church that had a website,” Jones said.

When Sermak and Jones called St. Matthew’s, Kay Ashby picked up the phone right away. “From that point on, we went there. Everybody walked up to us, talked to us, wanted to know who we were. It was a really fantastic experience,” Sermak said.

“It’s not like this is a gay church. It’s not,” Sermak said. “Whoever you are, wherever you are in your life, you’re welcome there.”

Sermak was raised Catholic and also appreciates Kay Ashby’s invitation to share traditions from other churches and religions. “She’s very open to that, and highly encourages it,” he said. “We’re very lucky.”

Joe Ashby notes that an inclusive atmosphere does not mean every member of the church feels the same way. “We’re not all of one mind; not everyone’s agreed,” he said. “We try to talk about it. We are inclusive, and in that sense, we make space for those who disagree, even, but we will treat each other with respect.”

For anyone struggling to reconcile inclusivity with their understanding of scriptures, the Ashbys recommend one thing above all else: simply having conversations. “Find some LGBTQ folks that you can have a conversation with. A lot of the time, we’re fearful of that which we have not experienced or encountered,” Joe Ashby said.

In both Mansfield and Ashland, the Ashbys and their churches are working on plans to support the local LGBTQ community more directly.

Grace Church is currently signing an agreement to house Love On a Mission, a local organization that supports LGBTQ people, primarily teens. “We're really excited about that as a very concrete way of saying this is a safe place,” Joe Ashby said.

Before COVID-19 brought gatherings to a standstill earlier this year, St. Matthew’s Church planned to host monthly potlucks for the LGBTQ community and their allies. They still plan to host them in the future when it is possible.

“Just to come together… as a support group and a safe place,” Kay Ashby said. “Have a meal, maybe some music.” She added that these will be casual gatherings given how people have been hurt by the church in the past.

“The love of Jesus is broader than any of the definitions we put on one another,” Joe Ashby said. “Listen to the message of scripture, which is the inclusive love of God. That’s all we can say--we’re sorry, but let us try again."