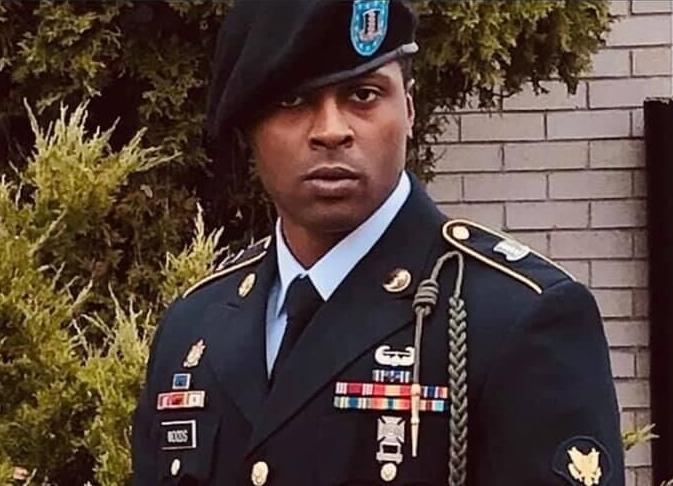 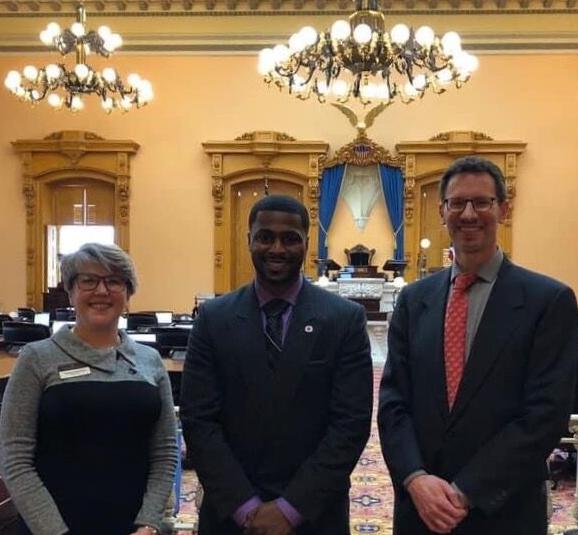 Woods at the Ohio State House with Teresa Purtiman, attorney and owner of Purtiman Legal Services, and Dr. Norman Jones, Director and Dean of The Ohio State University at Mansfield 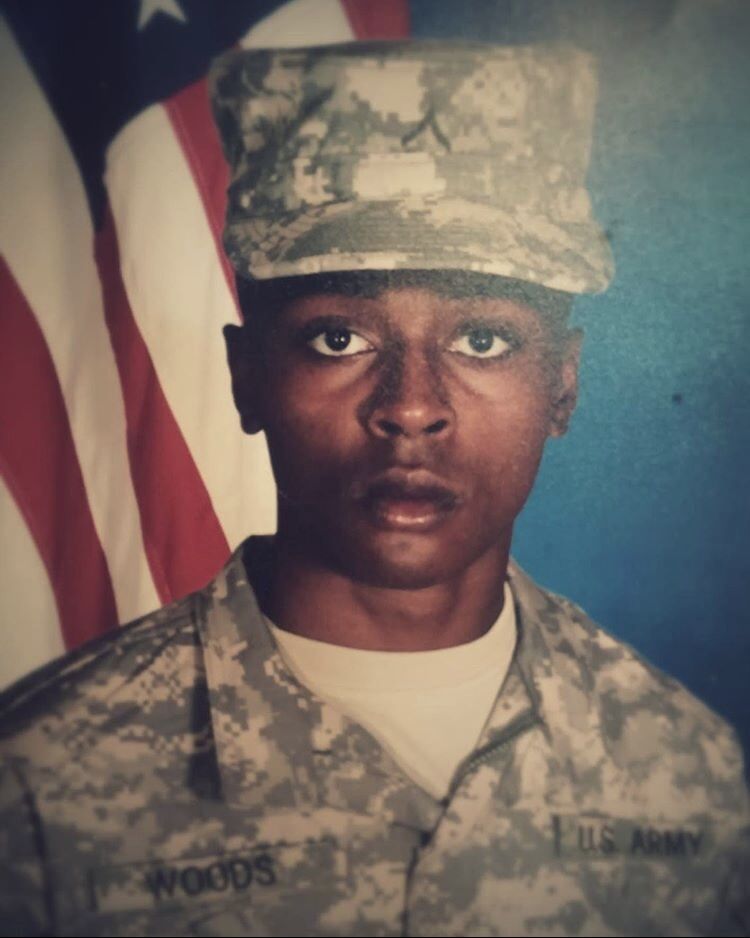 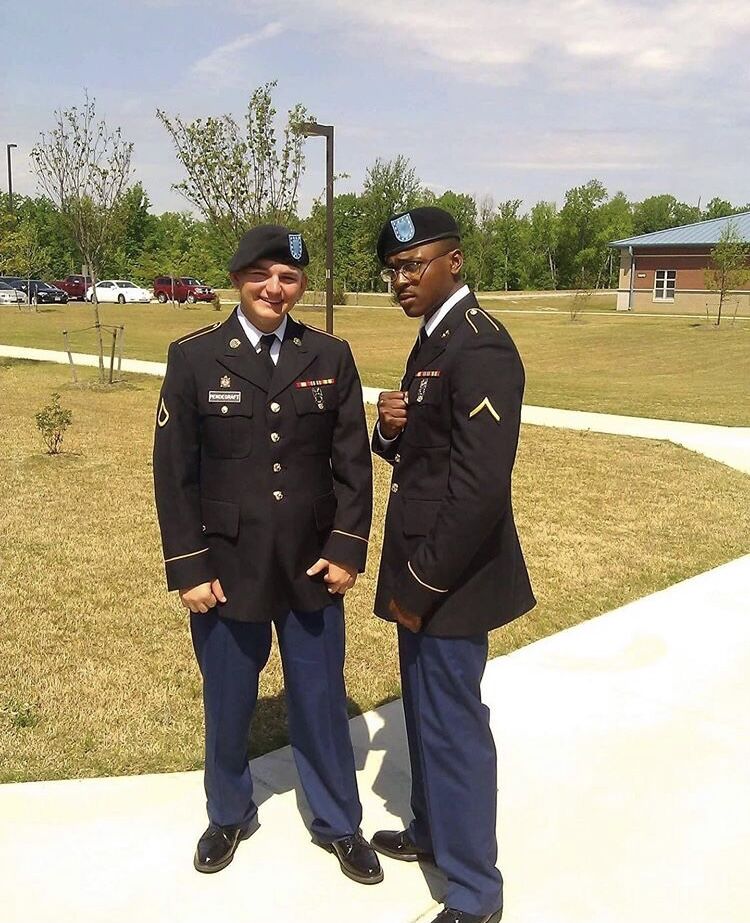 Woods with another soldier at AIT Graduation in April 2012 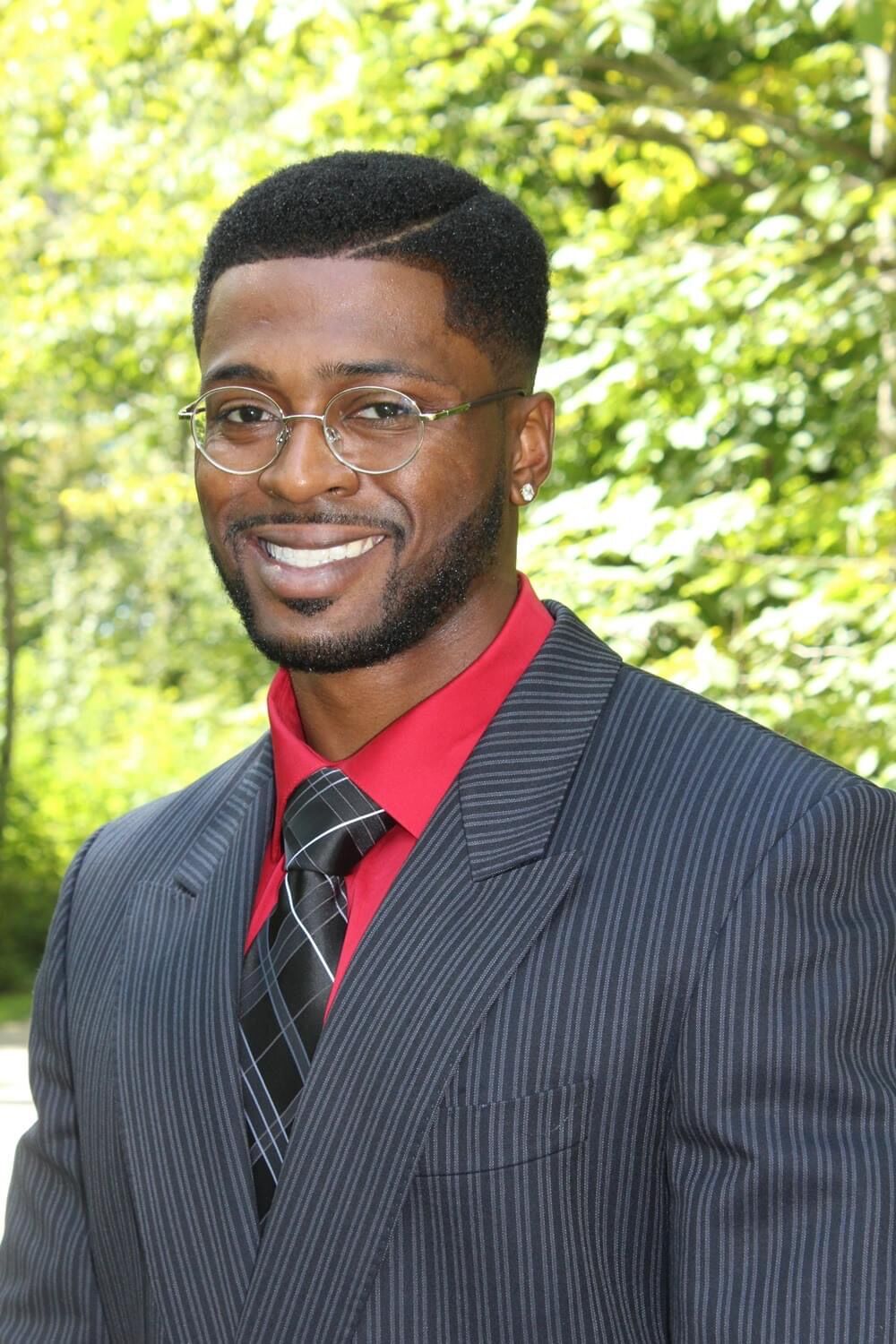 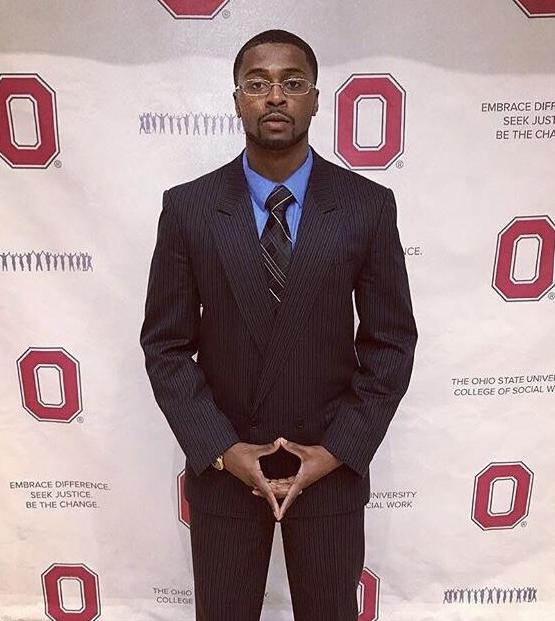 Posing at the College of Social Work Scholarship Dinner in March 2019.  Woods was awarded a $16,000 scholarship for veterans studying social work who plan to work with veterans and active duty troops through clinical social work.

MANSFIELD—Mansfield resident and U.S. Army veteran Antwan Woods takes a short break from his work interning with the U.S. Department of Veteran’s Affairs for a Zoom interview. Sitting in his parked vehicle to chat, he possesses a kind, open demeanor and exudes confidence as he speaks about his past military service and current work advocating for others.

Woods served in the U.S. Army from March 2011 until April 2017. After basic combat training and advanced individual training to be a small arms and artillery repairer—or, “in civilian terms, basically a weapons mechanic”—he was stationed at Camp Red Cloud in South Korea. At Camp Red Cloud, Woods was placed on the 2nd Infantry Division Taekwondo Team.

“Not only did I get to work with different United States soldiers, but also Korean soldiers. I made some long-lasting friends,” Woods said. “When I graduate with my master's, I plan on going back to South Korea and visiting some of my friends.”

After a year overseas, Woods was stationed at Fort Campbell, Ky., where he served with the 101st Airborne Division. He graduated from Air Assault School here, an impressive accomplishment.

“It's one of the toughest courses in the Army with [around] a 55 percent pass rate,” Woods said. “I had an injured hip, and we had to do a 12-mile ruck march to graduate, within three hours or less. I finished in two and a half hours. I was pretty hurt, but I earned my wings, and that was one of the proudest moments for me.”

As a squad leader at Fort Campbell, Woods supervised 20 soldiers, ensuring they repaired weapons correctly to guarantee mission readiness for the unit. These were weapons of all sizes, from the smallest to the largest, including cannon tubes that attach to tanks.

Shortly before his military service ended, Woods enrolled in classes at The Ohio State University at Mansfield. However, college was not always a feasible option for him.

Born in Cleveland, Woods moved to Mansfield as an infant when his grandmother adopted him. Following his high school graduation, he was unsure what direction his life would take.

“I was attempting to enroll into college, but I didn't know a whole lot about college,” Woods said. His grandmother was unfamiliar with financial aid options and unable to help. “She thought I was going to put myself in a lot of debt and really mess myself up.”

Instead, Woods enlisted in the Army the following year. When his service ended, the GI Bill for Veterans provided him with financial support to continue his education.

This spring, Woods graduated from Ohio State with his bachelor’s degree in social work. Dr. Norman Jones, Dean and Director of Ohio State’s Mansfield campus, said, “Antwan Woods is a natural leader with a strong sense of responsibility and an unwavering seriousness of purpose.”

“I was constantly in contact with the students and professors and staying engaged, whether student veteran organizations or social work organizations,” Woods said. Engagement with his college community helped to mitigate common stressors veterans experience adapting to civilian life.

Jones said, “[Woods] distinguished himself not only academically but also by serving his fellow students in multiple ways, most prominently as the student representative on our campus Board. In that role, he hosted student lunches that helped our administrative team better understand the needs of our current students, including student veterans.”

Woods advocated for other students’ needs at a state level, too. “He was an important voice in Board meetings, and he helped represent Ohio State Mansfield and our students in meetings with state legislators,” Jones said.

During these years, Woods also mentored a local child through a now-retired program with the North End Community Improvement Collaborative. This mentorship lasted for over two years.

“He was a really good kid, but he didn't necessarily have a good direction in life,” Woods said. “Instead of dropping out of high school, he's now thinking about either enrolling into college or joining the United States Air Force.”

Today, those interested in mentoring a local child can reach out to Mid-Ohio Youth Mentoring. This organization matches children with mentors willing to volunteer just four hours per month. According to their website, “There are currently more than 65 kids in our community waiting to be matched to a mentor.” Most of these children are in Richland County.

Woods notes his passion for social work kindled during his year in South Korea, where he witnessed a human trafficking problem firsthand.

“There were a lot of women from the Philippines that thought they were signing a singing contract with somebody within Korea, and then they ended up getting forced into sex trafficking. That really bothered me because I couldn't do anything about it.”

Although Woods initially planned to use his social work education to specifically address human trafficking, over the years, he saw career options with many ways to help others.

In his current internship with the Chalmers P. Wylie Veterans Clinic in Columbus, Woods works with veterans suffering from post-traumatic stress disorder (PTSD) and substance abuse disorders. He does intervention with female soldiers who acquired PTSD through military sexual trauma.

Now, Woods is an Ohio State graduate student working toward his master’s degree in social work. He just submitted an application for a doctoral program. “I guess I like the pain and suffering of studying,” he joked.

But Woods’ pursuit of higher education is deeply important to him on multiple levels. “What triggered it was the current climate that we’re in, in 2020, with regards to social injustice,” he said. “As an African American, (in our population) we are typically robbed of our education, specifically our ancestors.”

Woods explains African American boys are disproportionately placed in special education. “It reinforces the labeling theory. … If they feel like they're not good enough to achieve and accomplish things, that’s directly correlated with the school-to-prison pipeline and high school dropout.”

Ultimately, Woods wants others to believe in themselves like he has learned to do. His life philosophy is, “If you believe, you can definitely achieve. Perpetual optimism goes a long way.”

Looking to the future, Woods plans to re-enter the army as a clinical social work officer.

“Twenty-two veterans per day, on average, commit suicide,” Woods said. “That's about 8,030 per year. And with my experience being on active duty, soldiers didn't really have that mental support of social workers, so I feel like I’m doing a just cause, kind of like giving back to my community, by re-entering the service as a social worker.”