Mike Noser, 39, views life differently after trying to end his own at 28 years old.

The survivor of an attempted suicide considers each breath he takes a gift, especially now that he’s able to breathe without the assistance of a tracheostomy tube.

“I thank the Lord that I did (survive), I really do, because life is worth living and so many people don't recognize how valuable life is,” Noser said. “Lots of people succeed when they try and take their own life, and I feel bad for those people.”

Noser, a Lexington graduate of 1997, said he had a good life growing up with his loving, adoptive parents. He played soccer, liked fishing and hunting.

As a teen, he began using drugs recreationally. He ended up in the hospital one night after taking LSD with a friend who overdosed on the drug. By his early 20s he was hooked on prescription pills like OxyContin and Valium.

After graduating from high school, he studied at the University of Toledo for a year and then returned to Mansfield where he worked different jobs. His most recent employment was at Bearing Distributors, Inc.

The day everything changed

“I was at my then-girlfriend’s house and I don’t know what happened, but I decided I was going to end my life,” Noser recalled.

“I remember sitting in our neighbor’s yard, putting my back up against the tree that was about five or six inches in diameter, loading that shotgun, which I think we were planning on moving somewhere, and putting it in my mouth and pulling the trigger.”

To this day, Noser doesn’t know what led him to take such a drastic measure.

“But I didn’t succeed, and I thank the Lord every day that I didn't succeed.”

Following the incident, Noser was transported to the hospital where he was stabilized and treated for the next two or so years, he said.

His parents were told that he may not remember them coming out of surgery.

His doctor removed some bone and skin from his back to put on his face, with the eventual possibility of giving him a prosthetic eye and nose.

“But all that bone ended up getting infected, so the doctor had to remove it. So unless a miracle happens, I don't have any prospect of getting a prosthetic nose or eye because there's really no bone here,” he said pointing to the left side of his face.

Breathing and eating were made possible with the help of a tracheostomy tube and feeding tube.

“I couldn’t talk for the longest time because my mouth was packed full of gauze,” he said. “I couldn’t eat for about three or so years.”

Once he was cleared by his doctor, he moved into Oak Grove Manor where he met his girlfriend, Gina. He later moved to his current residence, Dayspring.

“I feel very fortunate that I found a place out here; Dayspring is awesome,” he said. “It’s the best place for me to be. They take care of all my medications, I get fed three meals a day, couple snacks, we get to go on fun outings. I have a lot of good friends here, too. That makes a big difference.”

Thankful to be alive

Every day he’s reminded of the fateful decision he made over a decade ago. And every day he’s thankful to still be alive.

“I thank the Lord every day that I'm able to wake up and open my eye, breathe, talk, eat, walk around in my own power, have a sound mind and love people,” he said.

Something that never sunk in prior to his attempted suicide was just how much he’s loved, especially by his parents, he said.

“They’ve stuck with me through thick and thin,” he said. “I put them some real grief and they still love me like crazy.”

The sad reality is suicide is on the rise. According to Richland Public Health’s preliminary report, there were 21 confirmed suicides in Richland County last year, “which is significantly higher than what we’ve seen,” said Joe Trolian, executive director at Richland County Mental Health and Recovery Services Board.

“We've been on an upward spike for the past few years and it's not just Richland County — it's across the state and frankly across the country,” he said.

One of the reasons for the increase has to do with the opioid epidemic, Trolian said.

“In fact, our coroner has stated that he's now looking at doing deeper level drug screens on individuals that commit suicide because he's finding one of the reasons behind people committing suicide is that they've been in and out of treatment and nothing seems to be successful. They're just giving up,” Trolian said.

“We've been very fortunate in Richland County that we've not had a suicide under the age of 18 for quite awhile and are hoping that we stay that way,” he said.

He said it doesn't seem to be impacting a specific economic or social level. “It seems to be across the board,” he said.

Here’s what to look for:

What you can do

Don’t be afraid to ask if you suspect a loved one is considering suicide.

“Ask the direct question: Are you thinking about killing yourself,” Trolian said. “It's one of the hardest questions to ask, but I've never had somebody to lie to me.”

If the answer is yes, “You need to be able to stay there and continue talking to them and try to encourage them to get help,” Trolian advised.

Richland County is home to numerous agencies that can help people. 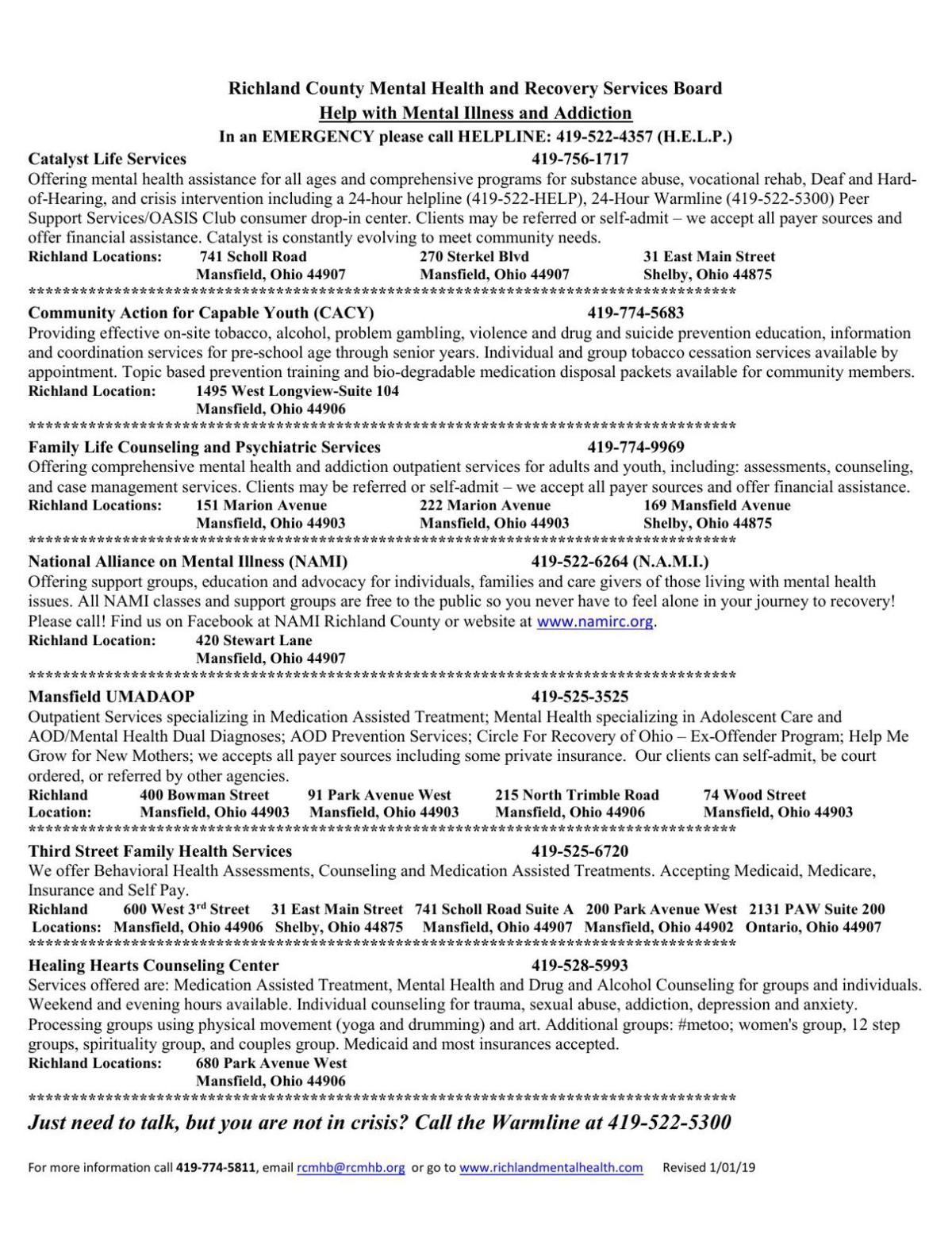 Life is worth living

“And I'll tell you from firsthand experience: it's no fun going through recovery from an attempted and survived suicide. I was hurt, hurt bad for years and you know, I’m still not perfect, but I’m as good as I can get for now. And that again is a blessing.”

Noser hopes to someday get his own place with a pond and some land and to marry his girlfriend.

“And I would like peace in my soul and happiness. I’m already getting there,” he said.

He believes the key to peace and happiness is caring for others.

“You do for others and then all of a sudden it’s done for you,” he said.

One of the ways he intends to help others is by sharing his story.

“If it helps just one person, it’s worth it,” he said.

From the outside, Danielle (Dani) Leedy looked happy. She was 33 and successful, 33 and beautiful, 33 with a great job, loving family, two dogs and a nice apartment in Washington DC, but just like so many others across the United States, she was wearing a mask.