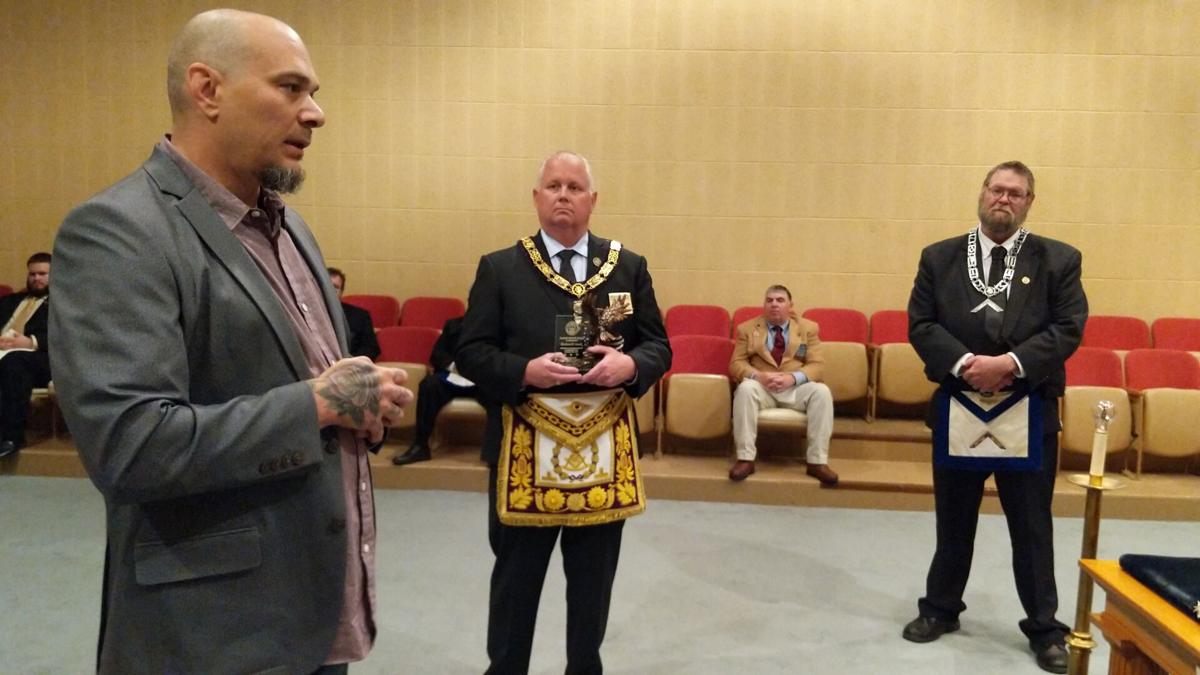 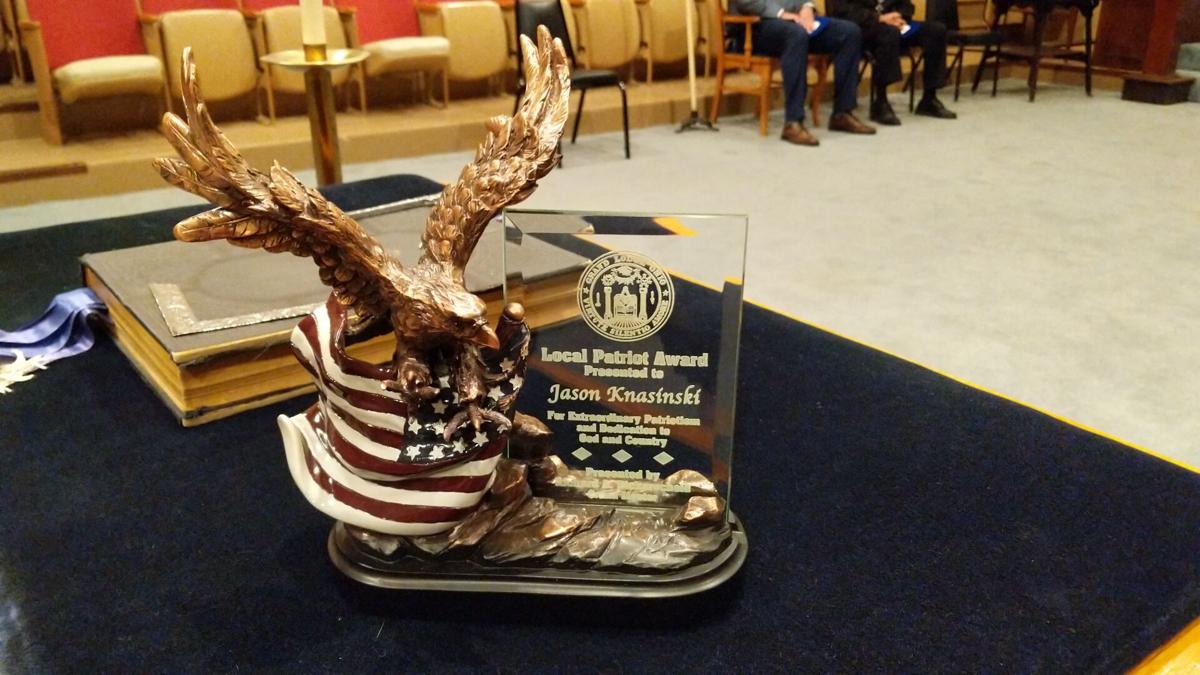 The Ohio Patriot Award is presented by the Ohio Free Masons.

MANSFIELD -- Jason Knasinski was nearly dead when strangers found him lying unconscious in an alley covered in snow.

“I don’t know if I passed out drunk or if I tripped and fell to be honest,” Knasinski said.

That was nearly four years ago. Knasinski, a retired Army veteran, was homeless and dependent on alcohol to get through the day.

Today, he’s sober and running his own transitional home to help those facing similar struggles.

Knasinski was honored Wednesday with the Ohio Patriot Award, an award presented to a military member or veteran who has contributed substantially to their community.

Knasinski was nominated for the award by Jon Sanders, worshipful master of the Mansfield Masonic Lodge #35, and selected from a pool of 17 candidates put forth by lodges in the 20th Masonic District. Grand Master Rich Dickerscheid presented the award.

The lodge is located right across the street from the parking lot where Knasinski once lived.

“I just hope that (this award) can show others that it's not over. It's never really over,” Knasinski said. “You can always change your focus and you don't have to wind up in a parking lot across the street forever.”

Knasinski grew up in Mansfield and did two tours in Afghanistan before being honorably discharged due to an injury. Upon his return, he began working as a computer programmer.

“I'm a United States Army Infantry veteran. I don't talk about that a lot because it kind of led me down a dark road,” he said. “It led me to depression and drinking a lot, losing jobs and trouble with the family led me to homelessness here in Mansfield.”

Knasinski couldn’t get into any of the local, government-funded shelters because he didn’t have a proper ID. So, he lived outdoors and slept in parking garages. It wasn’t until Knasinski woke up in the hospital that things began to change.

Hospital employees treated him for hypothermia, then told him how to get to the The Kenneth Wright Home (formerly the Harker Street Warming House), a community shelter run by Angie Henke. Unlike other shelters, there was no ID requirement.

“Angie is the one who helped me, who gave me a spot to get out of the cold and to eat. She helped me get sober,” Knasinski said.

The road to sobriety wasn’t easy. At one point, he got drunk and Henke kicked him out of the shelter. When he did get sober, he suffered intense withdrawal symptoms.

“Apparently, I had drank myself to the point where if I stopped drinking, I’d have seizures,” he said. “I nearly bit my tongue in half. I fell and got staples in my head.”

Nevertheless, Knasinski continued the fight with help from Henke.

“Part of the soldier’s creed is never give up, never quit. So I decided not to quit,” he said.

Knasinski eventually became a house manager at the The Kenneth Wright Home.

Now he runs his own facility, Jason’s House of Hope.

"Jason gives his life, he gives everything to help," she added. "If a guy calls in the middle of the night, he'd go or just talk to them. He can put himself where they are because he's been there."

The home was donated to Henke's non-profit, Reaching Out, and is located on Vennum Avenue. When Knasinski started working on the house, it was “down to the frame.” The floors were missing, there was no electricity, even the copper pipes had been ransacked from the walls.

Community members came through by donating funds, materials and labor.

Jason's House of Hope is a transitional home for men leaving shelters who have obtained employment. The men rent a bed in the fully-furnished, barracks-style home for an affordable fee in order to build rental history.

The intent is not to provide long-term housing, but to help residents transition to finding a place of their own. The average resident stays for about six months.

“Shelters are meant for short-term basic needs -- get out of the cold, shower, shave -- but if you’re really trying to get back on your feet, you need time to get your ID, to find services, get a job, to save money -- first month's rent, deposit,” Knasinski explained.

The shelter is community-funded, so Knasinski can accept residents without ID. But there are other requirements for staying at the house. Fighting, drinking and drug use aren’t tolerated. Neither is partying. Each month, the residents elect a house manager who helps ensure that everyone is pitching in with chores and following the rules.

The home is currently at full capacity with a waiting list. Knasinski continues to help at Reaching Out and is rehabbing a second facility on Newman Street that he purchased for $325.

The home will operate under Knasinski’s non-profit, Stronger By Choice. He hopes to open even more transitional homes in the future.

“I chose to be stronger. And there are people in Mansfield, Ohio that choose to do the same. But they need help,” he said. “I looked around and I couldn't find anybody to give them that help, so I decided to do it myself.”

Daily Heroes: Reaching Out provides hope for the homeless

EDITOR'S NOTE: Richland Source asked readers to nominate heroes from the community in the fight against the coronavirus using our Open Source …