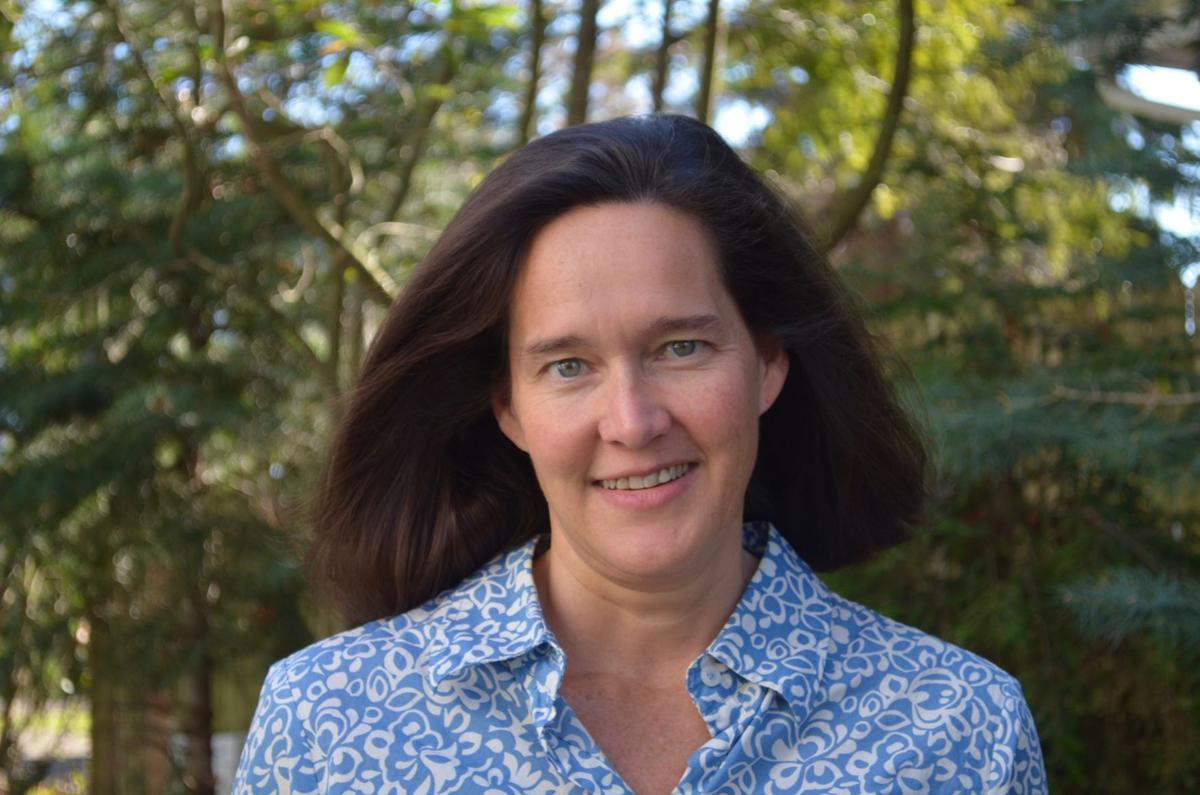 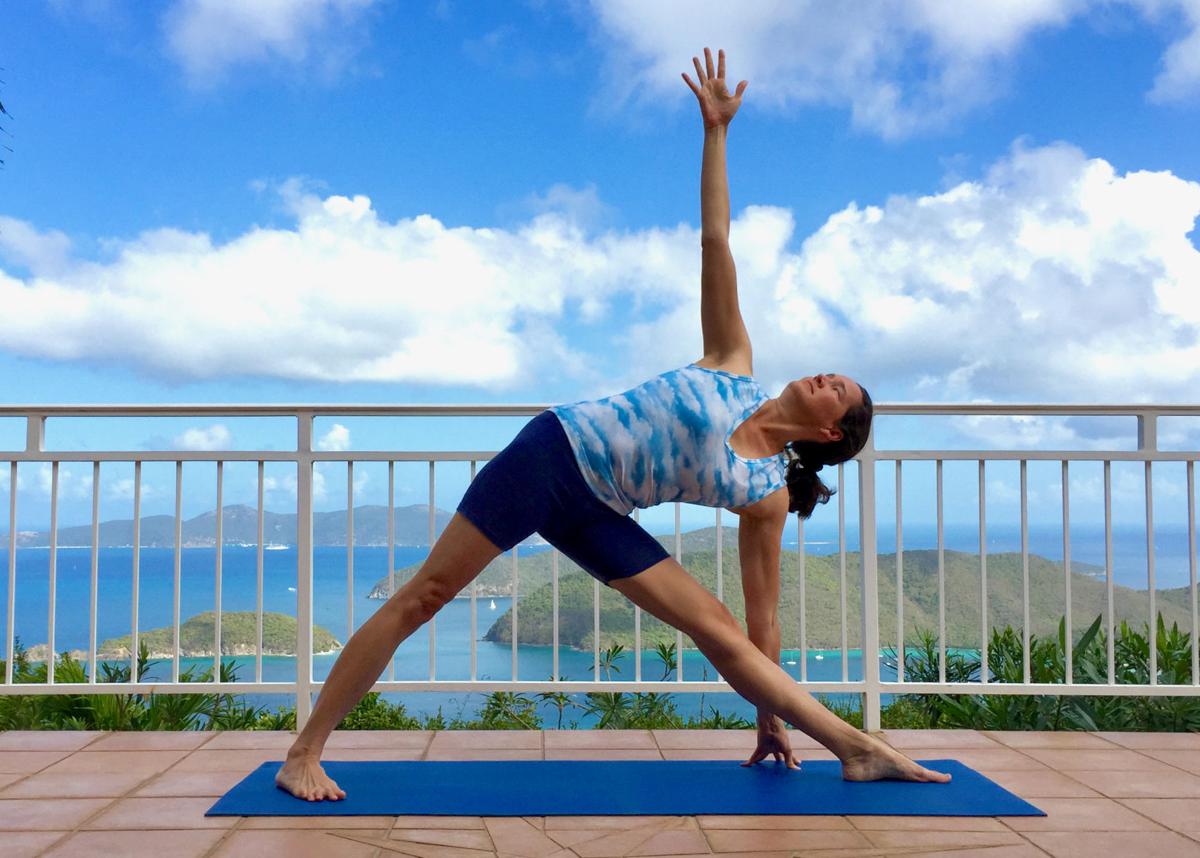 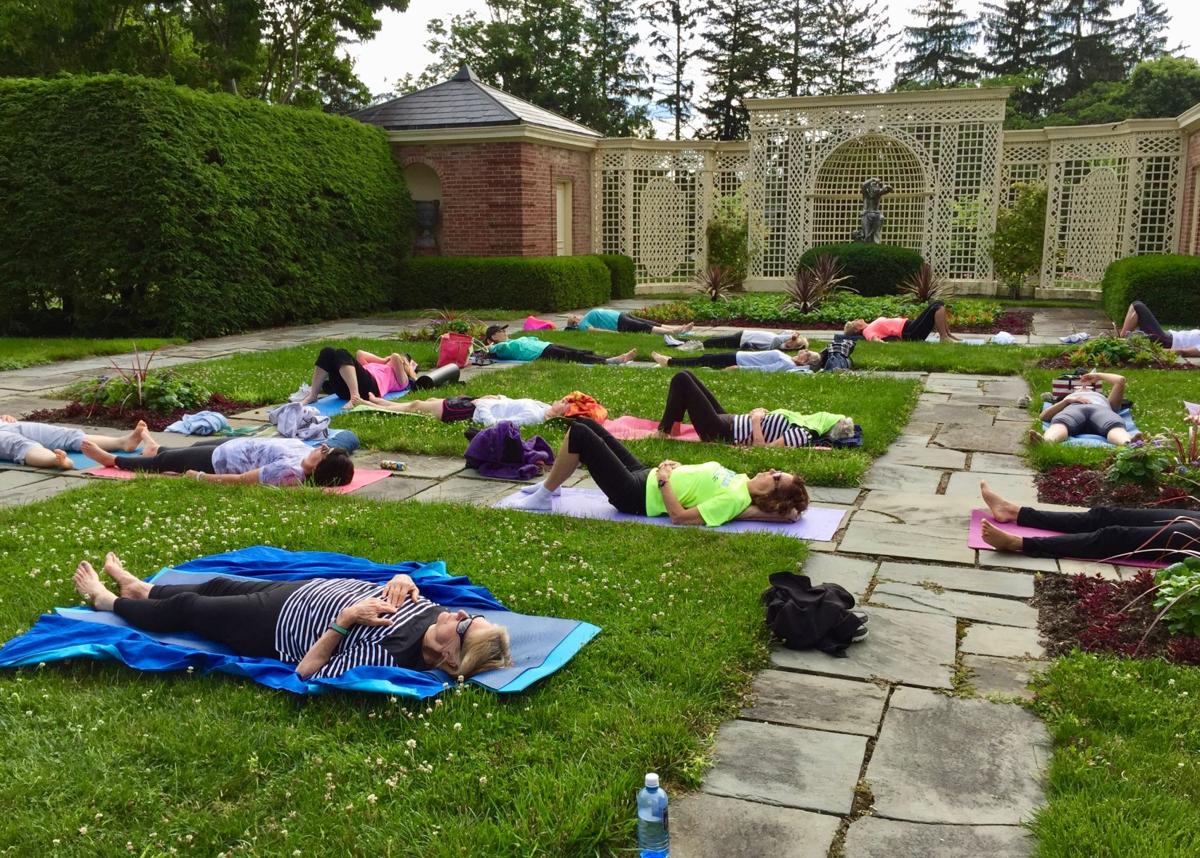 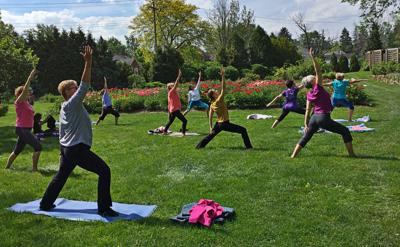 Mats of various colors lay sprawled across the floor as conversations carry on among what appear to be longtime friends.

The excited chatter comes to a close as Claudia Cummins takes her cue at the front of the class.

Cummins greets her yoga students with a smile, wishing them a happy vernal equinox.

“Let’s make up our own spring sequence,” she says while looking at notecards with student-requested yoga poses written on them.

The ceiling lights are turned off and rays of sunshine stream through the windows of First Congregational Church.

In a hushed and soothing voice, Cummins guides everyone through the poses, making smooth and gentle transitions from one movement to the next. She encourages everyone to move at their own pace and offers alternative poses to suit all levels.

For a single pose, no position may look exactly alike from mat to mat. But it doesn’t matter. The class means more than doing a perfect warrior pose.

“The most meaningful part of it is the community,” Cummins said.

Getting hooked on yoga

Cummins, 52, was introduced to yoga while working as a business reporter in Washington, D.C. She previously worked as a White House aide, “which, on paper, is definitely my career highlight,” the Mansfield native said.

It was through her position in the White House that she realized her love of writing, so she decided to get a master’s in journalism (her undergraduate degree is from Harvard University).

She started practice yoga to relieve stress from her hectic reporting job.

“It was so stressful and I couldn't leave my job behind at the end of the day,” she said. "At the same time, I was a runner, not a fast runner, but a recreational runner. I kept injuring myself and I thought, ‘This isn't right. I'm doing something for my health and yet I keep getting injured.’”

She stumbled upon a flyer for a free introductory yoga class and fell in love with yoga from her first downward facing dog pose.

“I don't know that I would've come back home if it hadn't been for my yoga and meditation practice,” she said. “Something about the practice gave me a stronger inner compass, a sense of what was really important to me.

“I spent a lot of my early years trying to live up to the standards and ideals of others, trying to be good enough in the eyes of the greater world. And when I started practicing yoga and meditation, I began to look inside more enthusiastically at what's important to me.”

Her definition of a successful life drastically changed. Instead of focusing on job titles, her attention turned toward forging meaningful relationships with others.

“What I learned was it’s my relationships with others — that’s the most meaningful part of my life,” she said. “And it turned out my deepest relationships were here in Mansfield.”

Since 1995, Cummins has taught in just about every banquet hall, church basement and community center in Mansfield.

“It feels like a vocation to me,” she said. “When you find something that you love so much and that has helped you so much, the natural inclination is to want to share it with others in the hopes that it will enliven their lives, too. So that's why I continued doing it and what's most gratifying about it for me.”

Adelle Morley, 80, of Mansfield, has followed Cummins since she first began teaching.

“I think that we are so blessed to have this beautiful soul here to teach us,” Morley said. “I just love it.”

“It makes my day every week when I come here. I wouldn’t miss it.”

“She has a way with her voice of just taking you wherever she is. It’s wonderful.”

Murray said she’s tried doing yoga at home, but it’s not the same.

“I can’t get myself where she can get me — just leaving everything behind and enjoying the moment. That’s what’s great about it,” she said.

Keeping her love for writing alive

Cummins has continued to write, with work featured in “Yoga Journal,” “Yoga International,” “Harvard Magazine,” as well as the the anthology “Spirit on the Move.”

For two years she served as a contributing editor of “Yoga Journal,” authoring its "For Beginners" column.

She’s also written two books, “Illuminations: Inspiration for Happiness and Peace,” and more recently, “Inside Out and Upside Down: A Yoga Journey.”

She wrote her recent book with her two sons, Liam and Graham, in mind.

“Someday if they wanted to know what craziness their mom was up to, or maybe if they're looking for a little inspiration or insight, they might turn to it and not even necessarily pull out a yoga mat, but see here's one way to be happy in the world,” she said.

Teaching with students in mind

Cummins has embraced a fluid and adaptive approach when structuring her classes — which wasn’t originally the case.

“When I started yoga, I would come to class with a script, which is probably not a bad thing for a beginning teacher to do,” she said.

While studying with Angela Farmer, a fellow yoga instructor, she was struck by her organic and improvisatory style.

“That really interested me, so I started showing up to class with an idea of what might happen, but also a willingness to look around, listen and see what I think the people in front of me need,” she said.

“I don't know at the beginning of class exactly what the journey is going to be like, which makes it a lot more fun for me and for my students.”

One of her goals is to make clear to her students that the poses are guideposts.

“Really, they lead us inward to our own inner teacher who can say, ‘My legs should be closer together,' or, ‘I should breathe here,’” she said.

Just because you may not be able to bend a certain way shouldn’t keep you from practicing yoga, she insists.

“She gives you not only permission, but encouragement to to do what is good for you,” said Jenny Knight, 69, of Mansfield, who has been taking Cummins’ classes for over 20 years.

“I think on paper my classes say they’re about yoga or about meditation, and they are, but they're also about building community, which is what yoga and meditation are about in the end anyway. They're about connection, about relationship, about understanding one's relationship to the greater world,” Cummins explained.

Her “secret aim,” she called it, is to build a little community of support.

Cristine Sutter, 67, of Mansfield, described it as a sisterhood.

It’s not uncommon for students to go out to lunch together after class or check up on each other if they’re a no-show.

“It does feel like a circle of friends,” Cummins said. “And the beauty is there's so many different people from all walks of life and you get to be a part of this circle of friendship just by showing up. You don't have to earn a right in it at all.”

Getting Started With Yoga

Learn more about the health, happiness and wellbeing in body, mind and spirit yoga practices seek to cultivate.