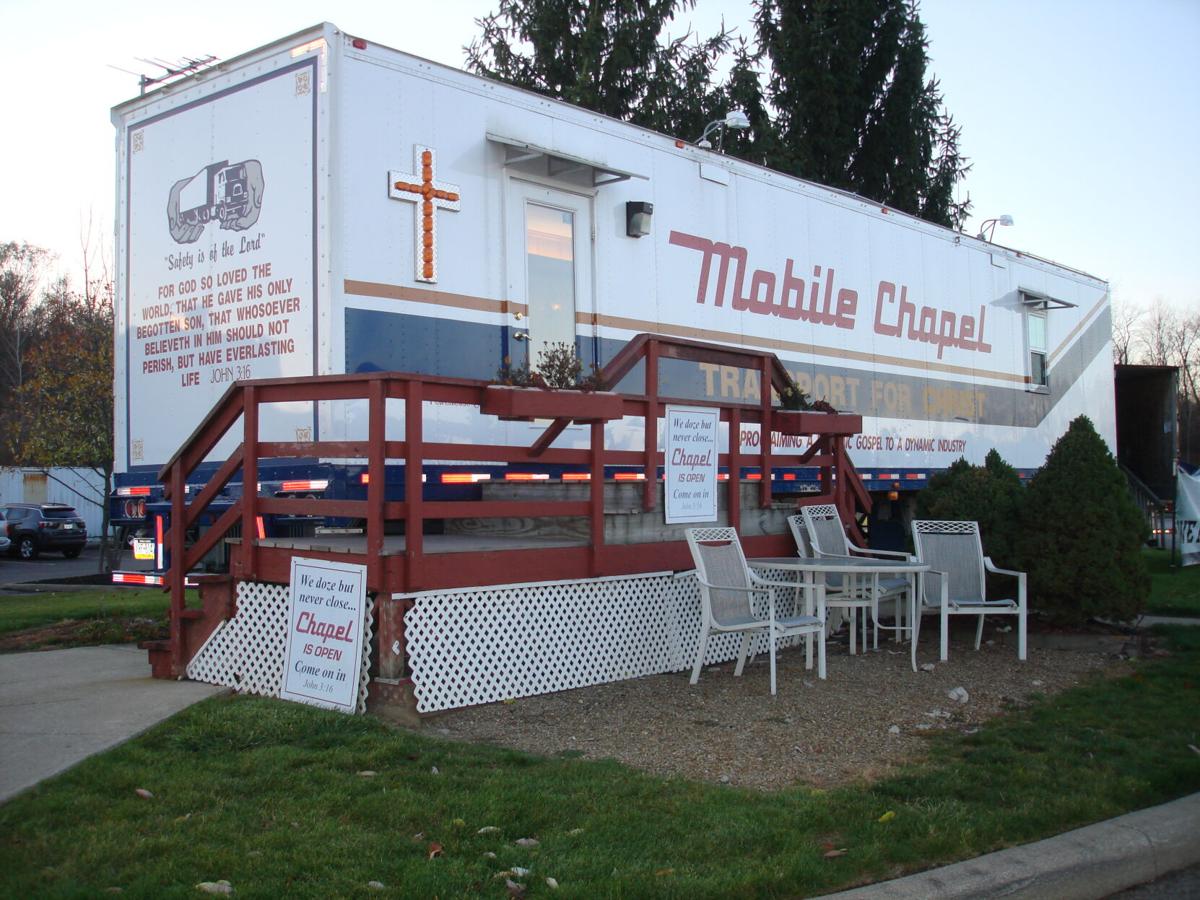 A mobile chapel run by TFC Global sits outside a truck stop. 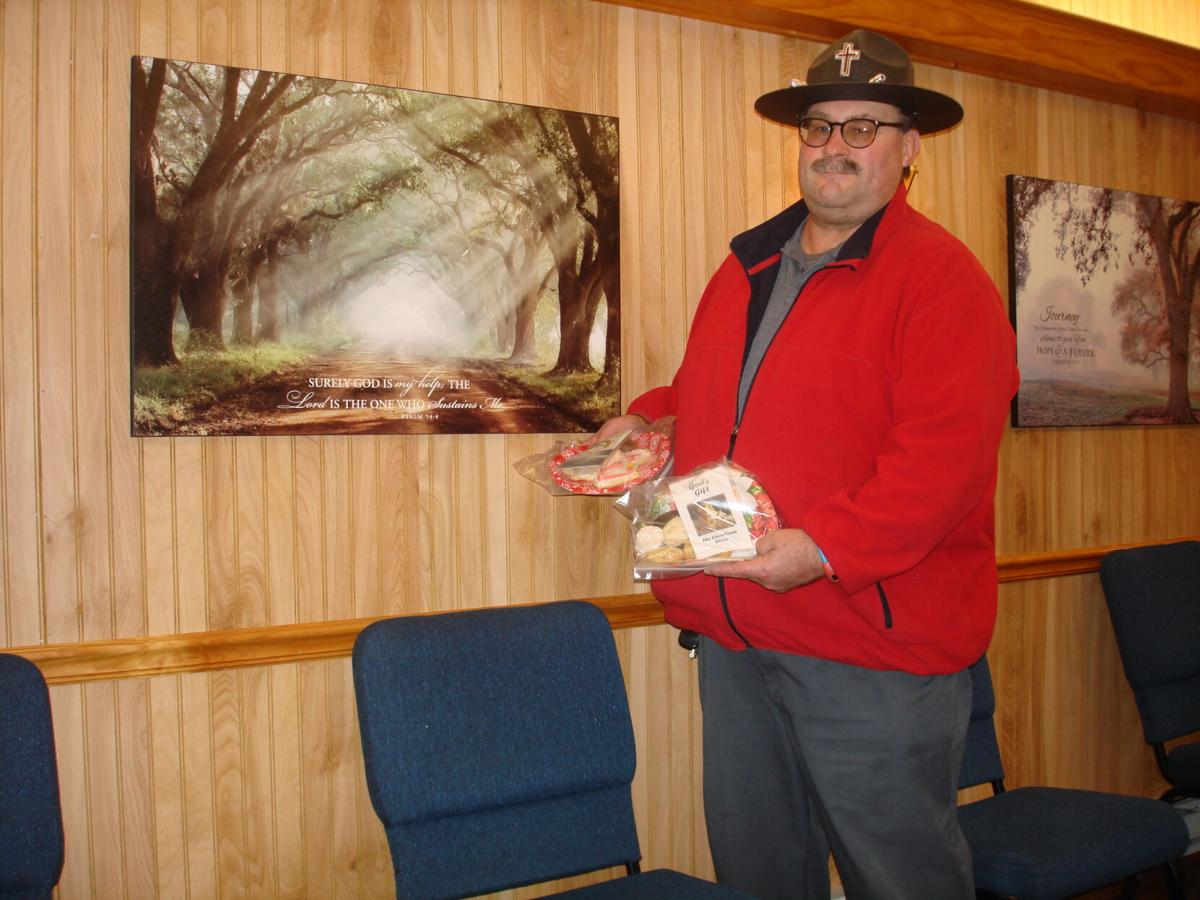 Rev. Stanley Wertz inside a mobile chapel, showing off a plate of cookies made for local truck drivers by members of Trinity United Methodist Church.

MANSFIELD -- Rev. Stanley Wertz’s mission field is anything but ordinary. Like most ministers, he spends time praying with people, leading services and counseling those who are hurting, but none of it happens in a traditional church building.

Instead, Wertz works for TFC Global, a non-profit, non-denominational ministry that serves truck drivers and their families. Founded as Transport for Christ, the ministry operates out of semi trailers converted into miniature chapels, parked at truck stops throughout the country.

Wertz began his ministry with TFC Global in July 2019 as an associate chaplain at the Lodi TA Travel Center.

“It was a smooth transition. I enjoyed what I was doing at the truck stop -- ministering to the truck drivers as they came through the chapel and being able to be a witness and to minister to them on an individual basis," Wertz said.

During his time as a chaplain, Wertz spent most of the day at truck stops -- walking through the parking lot and meeting with anyone who wanted to talk.

“It's wonderful to be able to minister not just to drivers themselves, but the whole community around the truck stops," Wertz added.

During his time as a truck-stop chaplain, he spent many hours wandering through the lot, greeting truck stop employees, drivers and their family and friends.

Wertz said it's a misconception that truck drivers make decent money and enjoy an adventurous life out on the road.

The reality is that many earn low wages and spend most of their free time at truck stops, since they aren't allowed to drive their trucks off the lot during their breaks.

Workers are given 8-hour breaks every 11 hours and required to take a 34-hour break every eight days, but they can't always arrange their routes to be home with their families.

“You wish you were home for family, but it often doesn’t work out that way,” Wertz said. “That kind of lifestyle doesn’t lead to being home much because wherever those hours expire at is wherever you better be sitting.

"It may be three weeks or three months before a driver gets home to their family and friends.”

A big part of working as a truck-stop chaplain is simply being there for workers who spend so much of their time alone.

“I’ve been able to talk to individuals about their relationship with God and to help them acknowledge some of their frustrations and overcoming some of their emotional stresses of the day," he said. “Just sitting and being a listening ear, giving some advice and praying with them."

Wertz hasn't been in ministry long. The Mansfield resident felt God's call to switch careers and attend seminary in 2014, when he was 50 years old.

After almost two years as an associate chaplain, Wertz was recently promoted to TFC's District Manager in the Great Lakes region. His new role is to provide leadership and support to chaplains in truck-stop chapels throughout Michigan, Wisconsin, Ohio, Indiana and Illinois.

He will also oversee the regional rollout of training programs for chaplains.

TFC chaplains are trained to watch for warning signs of human trafficking and provide resources for potential victims. They also lead weekly sessions of Celebrate Recovery, a Christ-centered 12-step program for those struggling with addiction.

Wertz received his call to ministry later in life. In 2014, he felt God calling him to the Methodist Theological School, so he quit his job at the age of 50 to forge a new path.

Prior to that, he had worked for the soil and water conservation district and later the State of Ohio. He spent 15 years teaching GED and career technical courses at Mansfield Correctional Institute.

Despite the twists and turns his life has taken, Wertz has no doubt he's in the right place.

“Every individual is made in God's image and we need to demonstrate that compassion to every individual, at every stage of life, in every condition," Wertz said. "That's what inspires me everyday is being the hands and feet of Christ to those in need, especially those drivers who live a life of solitude out on the road and give an important service.”