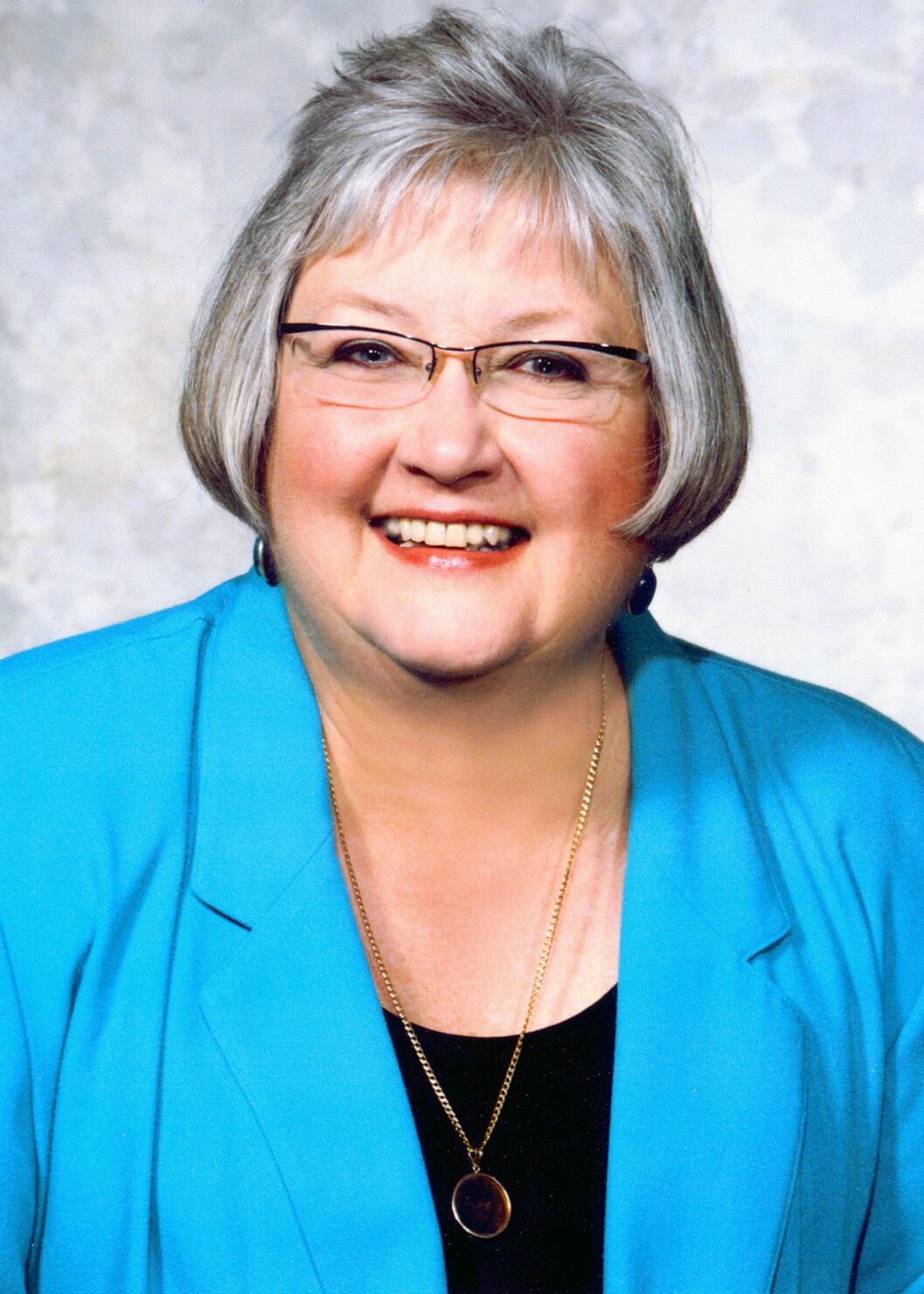 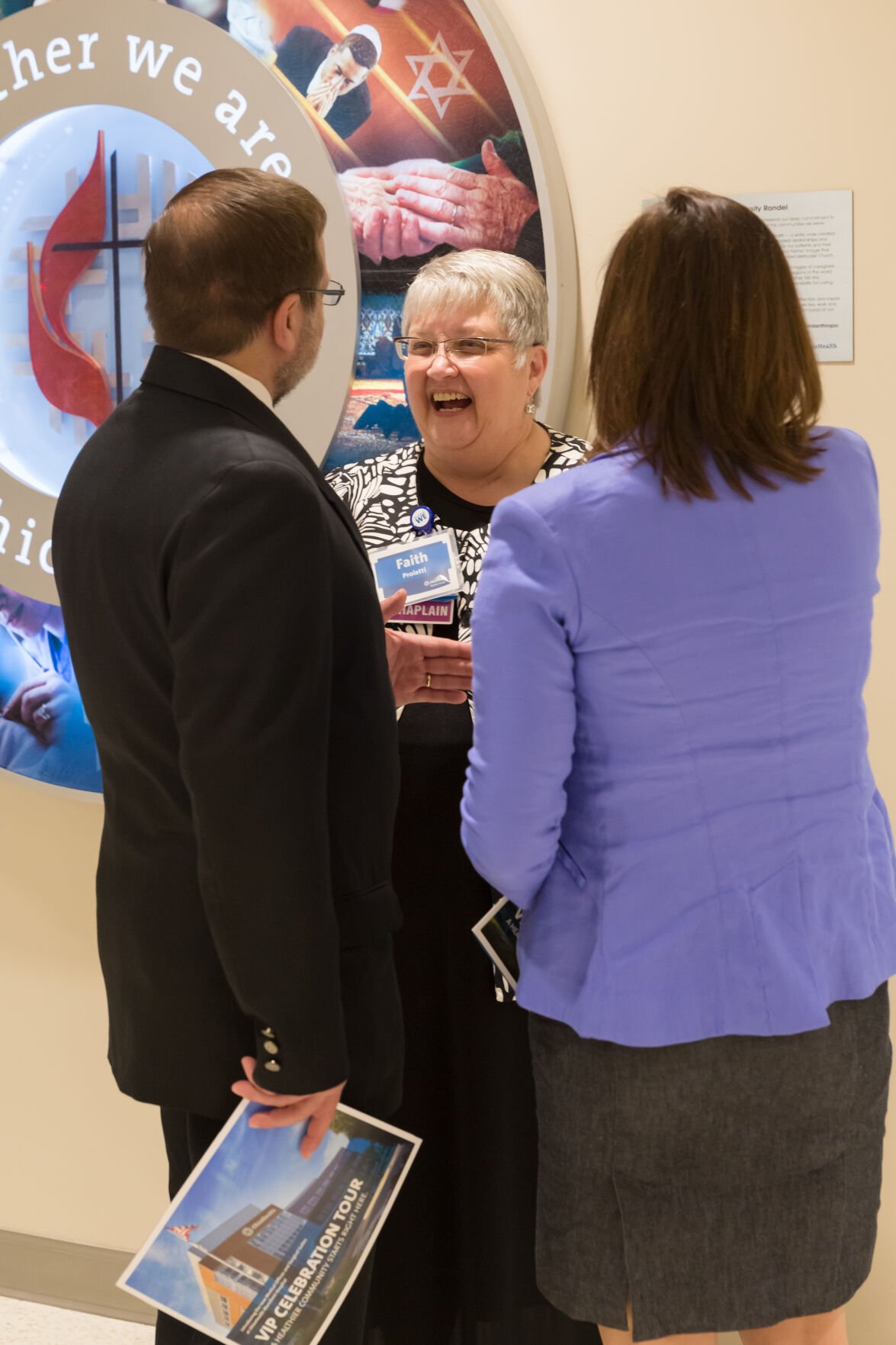 In 2015, Proietti attended an opening event for the Medical Offices at OhioHealth Mansfield Hospital in order to bless the new space. The blessing is for patients, who will be cared for, as well as for the caregivers. 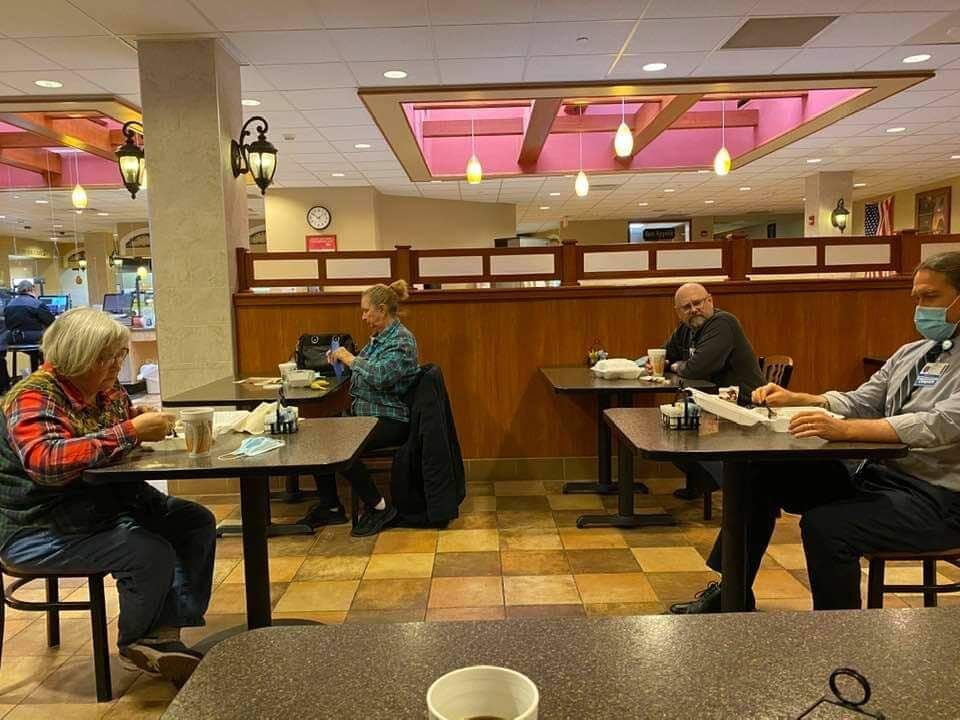 Proietti and her team have met once a month for breakfast during the pandemic to check in with one another.

MANSFIELD — After 26 years of caring for the spiritual and mental well-being of patients and their families, Pastoral Care Manager of OhioHealth Mansfield and Shelby Hospitals Faith Proietti will retire at the end of the year.

Proietti began her career at Mansfield General Hospital, in 1994 as a bereavement coordinator for hospice. From 2000 to 2011, she served as a staff chaplain until she was asked to take over as Pastoral Care Manager from 2011 to 2020.

“I have to be honest and say that I truly have loved my job and being in Pastoral Care and being a chaplain, and I couldn't ask for a better journey than I've had. It's (been) amazing,” Proietti said.

Proietti first began her career working in the hospice part-time while earning two master’s degrees, one in counseling at Ashland University and another in divinity at a Methodist school in Delaware. She also went on to do a doctoral study in a Presbyterian Seminary in Pittsburgh.

While working in the seminary and earning her counseling degree, Proietti became interested in the hospice program and went on to earn a Master of divinity degree. Part of the requirement in order to graduate was to do a clinical pastoral education class and be ordained as a minister.

She took a class for four months at a clinic and would spend nights there as the only person on-call. As the primary point of contact, she answered trauma calls and took immediate care of individuals in difficult situations such as pre-surgery, post-surgery and mental unwellness.

“I got hooked,” Proietti said. “That's all I thought about when I would come home. That's where I wanted to be; that was where my heart was. And I felt that every time I was there, doing that job being a chaplain, I was at the love of my life.”

The Pastoral Care Program at Mansfield and Shelby Hospitals allows chaplains to be a source of support, guidance, companionship and hope during a hospital journey.

By referral or through the family’s wishes, chaplains can assess the patient and discover their primary needs, whether it's psychological, emotional, relationship-wise or even their own faith or tradition.

“Usually people bring a lot of baggage with them,” Proietti said. “They don't leave everything at home. And so we are there to be that support system to say, ‘What are you in need of and what can we help you with? And what's most important to you?’”

In her early career as a hospice bereavement coordinator, Proietti brought suicide and cancer support groups to the hospitals, the latter of which she resonated with the most after surviving her own cancer in 1995.

Cancer was not the only adversity Proietti overcame. She was born prematurely, weighing only three pounds when she arrived. When the doctor told her parents that she would not live, her mother said a prayer and asked God that if there was some way he could use her on this earth to ‘please do.’

Despite not being able to eat much those first few weeks of her life, Proietti survived and went home as a healthy five-pound baby. The miracle of her life made it obvious for her parents to name her ‘Faith.’

Having earned multi-state educational degrees and learning about other faith traditions and cultures, Proietti’s been very prepared for her job and working alongside two other chaplains, Phillip Green, a Buddhist/Christian and Hannah Wilson (Church of the Brethren).

Mansfield and Shelby Hospitals see a diverse group of patients of different races and faith traditions, including Muslim, Amish, Jewish, Christian, Catholic and more. Chaplains are there to respect those traditions and help those patients by connecting them with their religious leaders, or even if they have no faith at all.

“It's an open slate, and an assessment to see what they're in need of at the time,” Proietti said. “And sometimes it's a prayer. Sometimes it’s just sitting with them and holding their hand. Sometimes it's to hear a last confession. Sometimes it's to reunite family members that haven't talked (to the patient) in 20 years, depending on what your needs are. And so that's what we're there to do, if we can, with their permission.”

For Proietti, it’s an honor to be invited into any person’s space and be a part of those sacred moments of their lives.

She recalled a time where she helped a woman who came in for cancer surgery. Thinking the patient would want to talk about her concerns or fear, Proietti was surprised to hear her say that all she could think about was the 10 cats she had left at home.

“I had to connect with a social worker and her family members… to make sure, before any other discussion happened (about the patient’s surgery), that her 10 cats were being taken care of,” Proietti said.

After connecting with a neighbor and ensuring the patient’s cats were in safe hands, Proietti was able to reassure her there were no other personal issues to worry about.

Shelby Mayor Steven Schag, who’s worked with Proietti over the years, only had high praises for her work as a chaplain and the level of comfort she’s provided for patients.

“Rev. Faith Proietti was perfectly gifted for her role as (Pastoral Care Manager),” he wrote in a statement. “She had a sincere passion to provide for the spiritual welfare of hospital patients and staff. She had a real concern for individuals, a cheerful countenance and an ability to communicate on every level.

“She highly valued the important component of spiritual ministry provided by volunteer chaplains in the continuum of care provided to every patient. I certainly wish her all the best in her retirement years.”

Although working in the pastoral care department can have its highs and lows, Proietti was able to get through it with Green and Wilson in the program. Together, they would support each other and talk through tough cases or ordeals their patients were going through.

“I have two wonderful chaplains, and they are the strength of this department. And they certainly emphasize everything that we want to present to OhioHealth in this hospital and community. They are just wonderful, wonderful people, and I will miss that,” Proietti said.

As she approaches the final weeks of her employment with Mansfield and Shelby hospitals, Proietti can only look back with fondness and appreciation for her colleagues and the patients she’s worked with.

She will miss the once a month breakfasts with her co-workers, the prayers they would share with and for each other, the laughs and the tears. She will especially miss the continual opportunity to walk into a space and be in a sacred moment with a patient or associate.

“I'm being allowed to share with them the intimacy and the concerns that they may have. And to me, that is such an honor and privilege to have that opportunity that very few get to do,” Proietti said.

Once retired, Proietti’s initial plans are to start downsizing her house—putting her engineering skills to good use—and selling her current home, as well as volunteering in animal shelters.

For giving her the best 26 years of her life, she extends her thanks to OhioHealth.

“It has been a dream come true, and I don't know many people that get to live out their dreams like I have,” Proietti said. “I wasn't sure that I would be celebrating 26 years, but it has been an awesome journey... And I wouldn't trade it for anything in the world.”