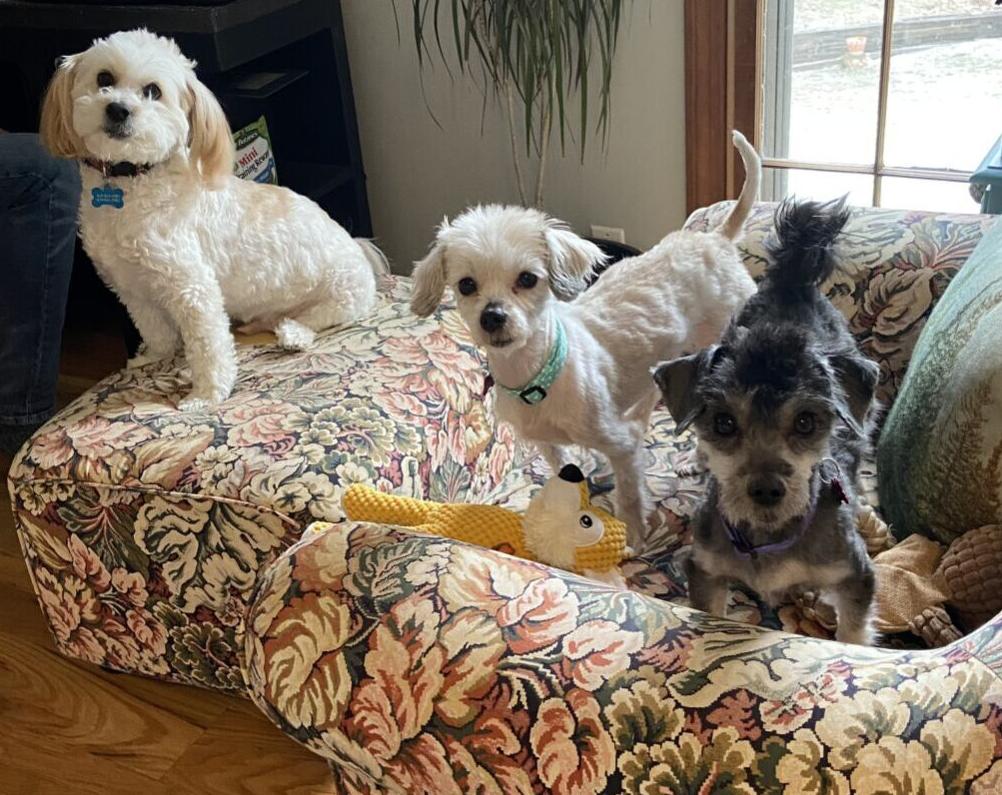 Opal and Olive pose for a picture with their new brother, Oscar, who was adopted by the Mitchells a few years ago. 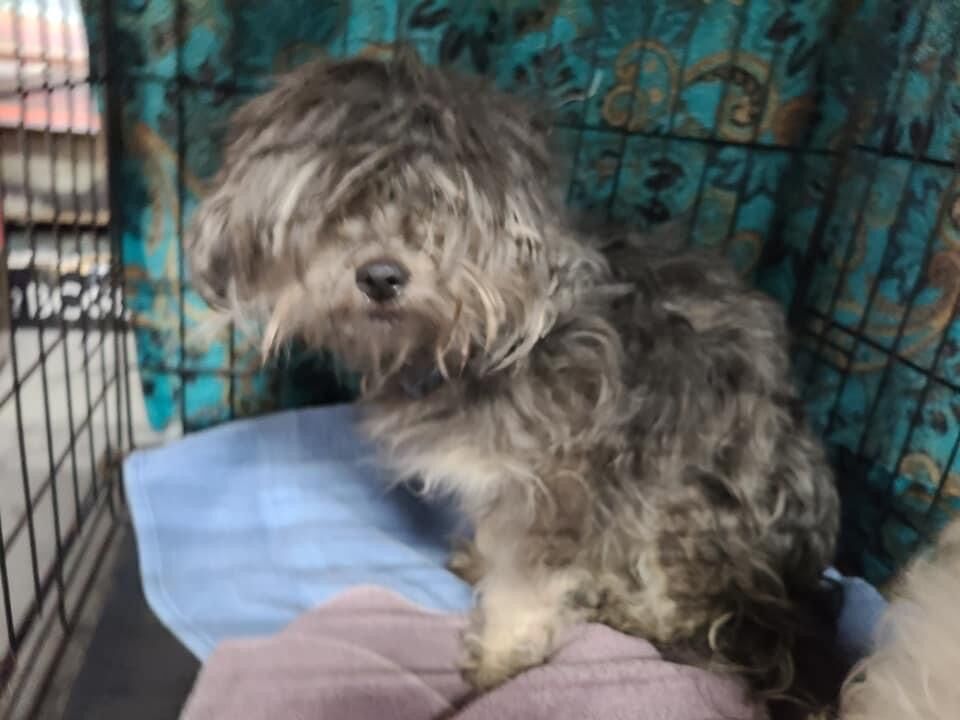 When Julie Mitchell and Amber Cyrus first rescued the dogs from the Mohican woods, their fur was completely matted and covered their eyes. 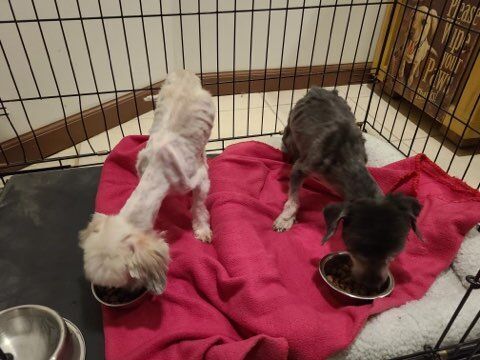 Opal and Olive eating their first meal at the rescue. 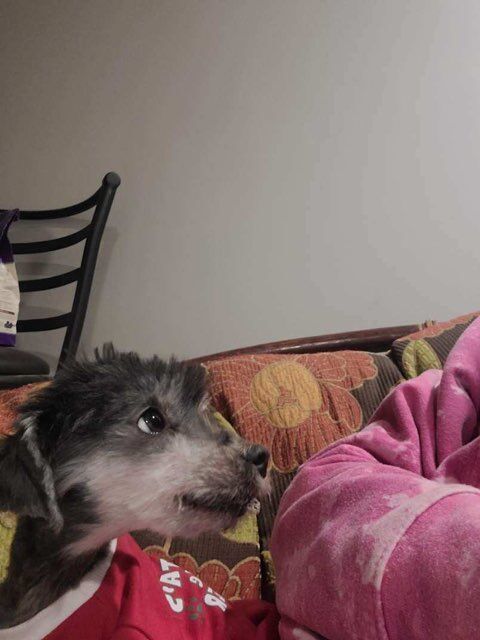 Olive at the rescue. 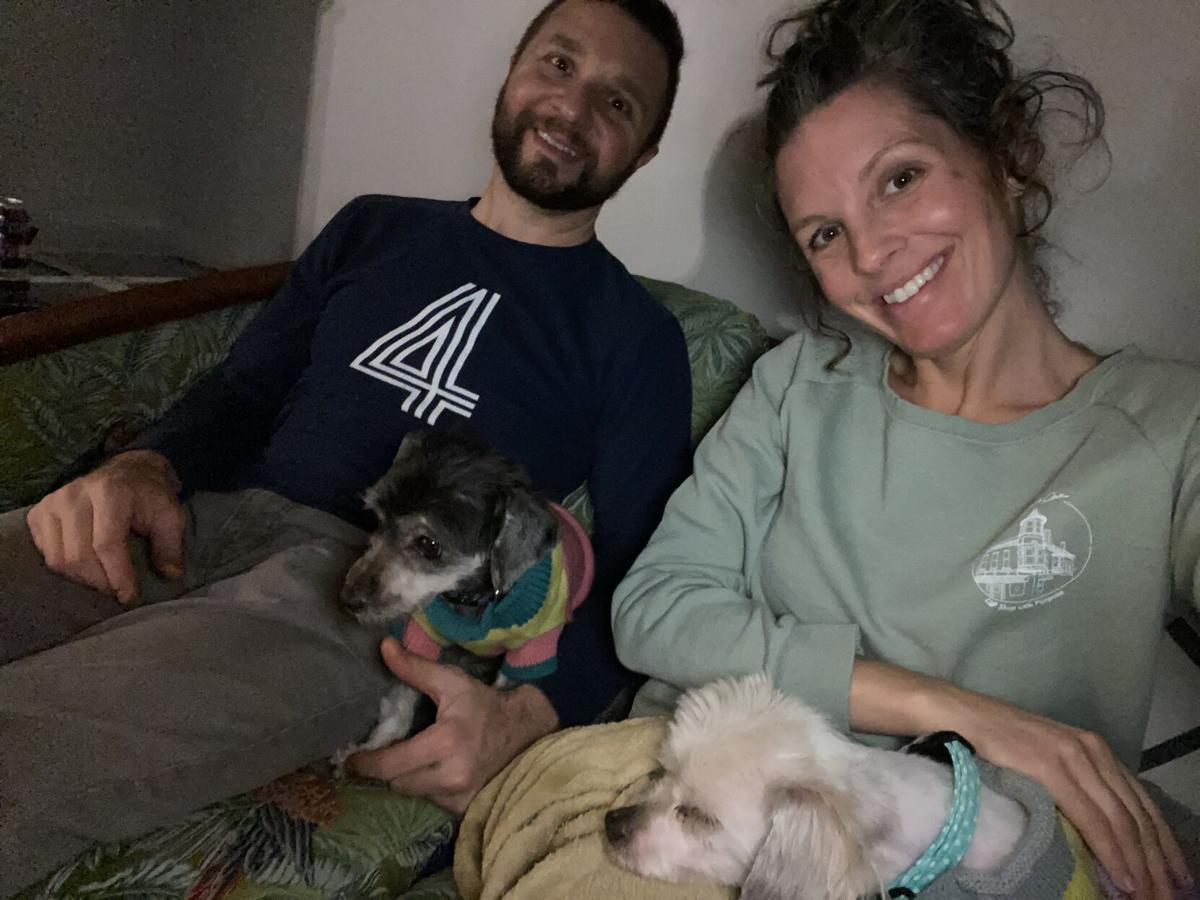 ASHLAND – On a snowy winter day, Fig & Oak Owner Julie Mitchell and her friend, Amber Cyrus, went for a trail run in Mohican State Park. About a mile and a half along, they spotted two small dogs trotting toward them. At the sight of the women, the dogs turned around and began to run in the same direction.

Assuming the dogs were off-leash pets belonging to a family up ahead, Mitchell and Cyrus listened for someone calling for them. After about a mile of running behind them, it became apparent no one was with them in the woods.

When the dogs suddenly veered from the trail and darted up toward Hickory Ridge, the women chased after them, hoping to look at their tags and get owner contact information.

Once they caught up with one of the dogs, Mitchell and Cyrus were horrified to discover the shape she was in: her hair was grown out and matted, and they couldn't even see her eyes. She was obviously afraid, nipping at Cyrus, and she wore a collar but no tag.

“We were like, ‘Oh no, now they're separated, and we have to get the other one because I don't think she'll survive out here,’” Mitchell said. “I chased her for maybe a quarter of a mile until I found her. She had started under a branch and was stuck in thorns because her matting was so bad.”

The women called a park ranger for help and headed back to the car to warm up. On the way back, Mitchell feared the one she carried may have died. It felt as though her heart had stopped beating.

In the car, the frozen dogs began to thaw in their laps, and the women discovered just how dirty they were: the smell was overpowering.

“The groomer seemed to think it wasn't like running-in-the-woods-for-weeks-or-months dirty. It was more like neglected dirty. They seem to think that they weren't in the woods that long, which I believe because it was a very cold day. One started having signs of hypothermia from being out there,” Mitchell said.

“They were just completely submissive and quiet and just laying there. (Cyrus) kept trying to give them water, but they wouldn’t take it.”

A park ranger picked up the dogs and transported them to a veterinary clinic in Copley, where they were scanned for microchips. He then contacted Angela Pleat, the owner of AJ’S Search and Rescue, an animal rescue organization in Akron.

Pleat took the dogs into her home and reached out to one of the rescue’s foster moms who is a dog groomer. She came over that night to shave and clean up the dogs and assess their condition.

“When we shaved them down, they were literally bones,” Pleat said. “They'd been living in filth. I mean, they were definitely just mistreated. They were not taken care of, and then they were dumped. They would not have survived out in that cold weather.”

They also discovered several dead ticks on both dogs. The white dog had walking issues after they first shaved her, so x-rays were arranged to make sure there weren’t permanent issues with her knees, hips or legs.

For dogs of their age and breed, a health weight would be between 10 and 12 pounds. When Pleat weighed them that first night, they were approximately 4 pounds, 14 ounces and 5 pounds, 9 ounces.

Back in Ashland, Mitchell could not stop thinking about the dogs. She and Cyrus had shared a social media post asking community members to contact them if they knew who the dogs belonged to, which was quickly shared far and wide.

“I wasn’t sure I’d see these little girls again, but my heart wouldn’t stop thinking of them...and so we waited,” Mitchell shared on Fig & Oak's Facebook page.

When the ranger sent Pleat’s number to Mitchell, she reached out right away. Pleat recalls receiving many messages from Mitchell in those first days following the rescue. While she could tell Mitchell cared deeply about the dogs, she took the necessary precautions to ensure the Mitchell family would be a good fit. They filled out an application to adopt and waited to hear back.

“Once I found out who they were from their application, everything was good. They’re great people. Phenomenal people,” Pleat said. The whole Mitchell family drove up to visit the dogs one day, and they officially named them Olive and Opal.

Before Olive and Opal were ready to leave the rescue, they needed to gain some weight and receive medical treatment. In most situations, Pleat said she would keep the dogs until they were fully recovered, but she knew they would benefit from moving into their forever home sooner than later, and the Mitchells will bring them to Akron for needed veterinary appointments.

“I get updates every day,” Pleat said. “There was no reason for them to not go into their forever home where they can get adjusted.”

Mitchell reports the pups are at 7 and a half pounds and 9 pounds now, scarfing down their meals and showing continual improvement in their health. She is thrilled they were able to bring both dogs into their family and keep the bonded pair together.

“It’s like monkey see, monkey do,” Mitchell said. “They have to do everything each other is doing and check on each other and cuddle next to one another when they're sleeping.”

Olive and Opal now belong to a loving family of four humans, John, Julie, Jayden and Joel Mitchell, one other canine named Oscar and a bearded dragon named Bartholomew.