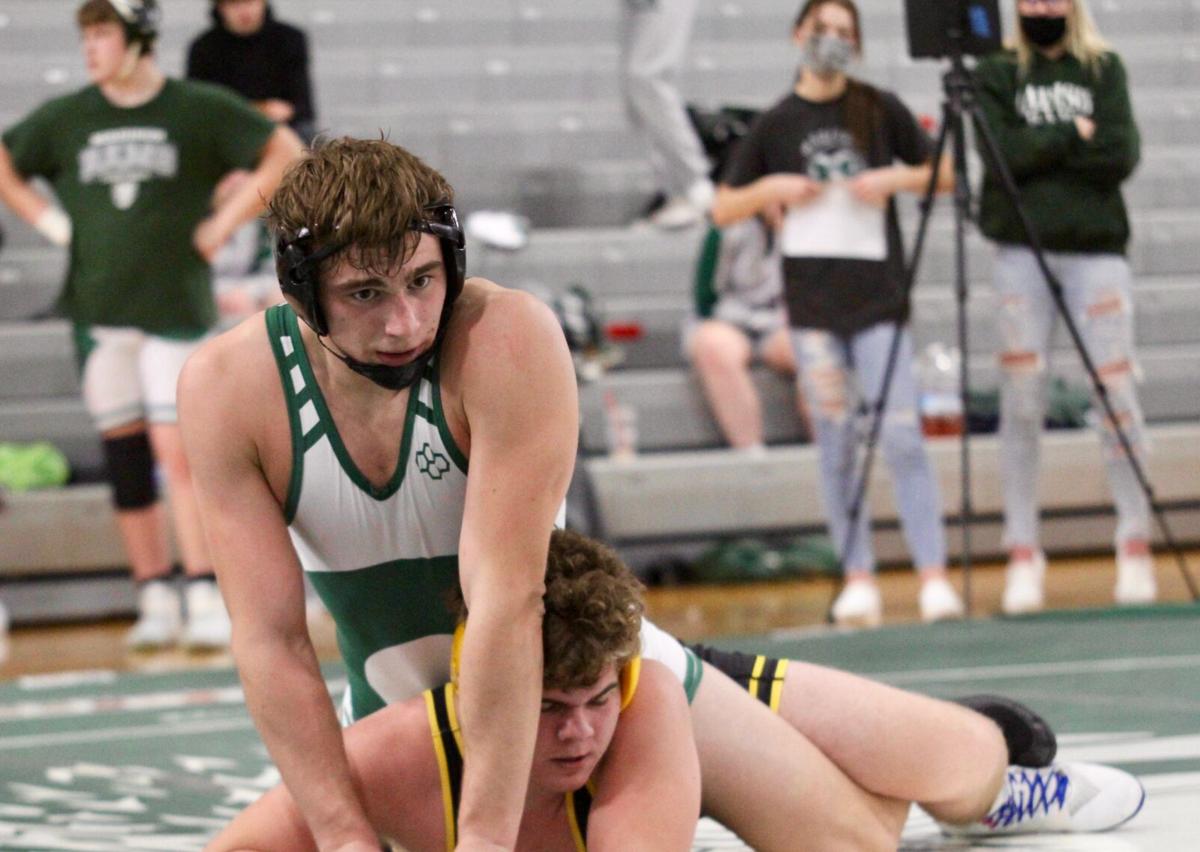 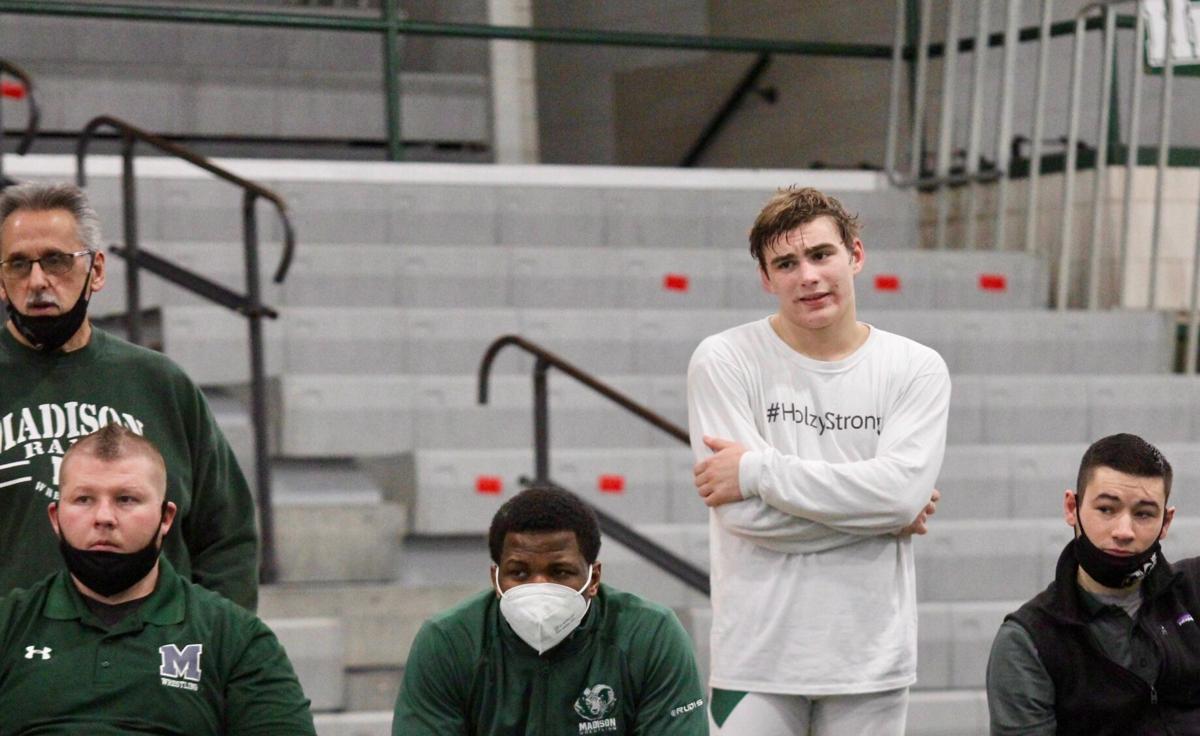 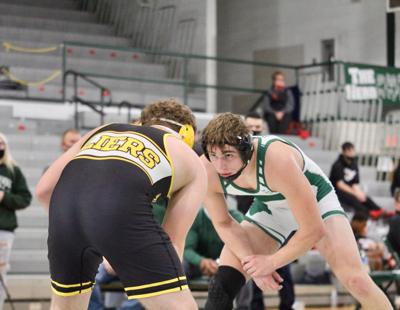 MADISON TOWNSHIP — Robin Barrett understands better than most the hardships her son, Nate, has overcome these past few years.

As Madison’s unofficial photographer of record, Robin has had a ringside seat for all of Nate’s euphoric highs and soul-crushing lows — and there have been more of the latter than the former.

“The kid has dealt with some adversity,” Robin says matter-of-factly from the floor of Wayne E. Miller Gymnasium, where she is snapping photos of Nate and his wrestling teammates during Saturday’s Madison Duals.

That Nate Barrett has overcome all the curve balls life has thrown his way is a testament to his perseverance and determination. They are character traits that serve him well on the wrestling mat.

“Adversity is going to come to everyone. It’s how you deal with it that matters most,” Madison wrestling coach Bryan Mosier says as Barrett and his teammates tear down mats Saturday afternoon. “We tell our guys, ‘You can control two things: Your attitude and your effort.’

“Nate comes into the wrestling room every day with a good attitude and works his hind end off. He controls what he can control and does the best he can. That approach is going to help him down the road when he has to deal with real-life adversity.”

Adversity, it turns out, is a family affair for the Barretts. Robin was diagnosed with breast cancer while Nate was still in middle school.

“The doctors said it was a super-aggressive form of cancer, but it didn’t metastasize,” Robin says. “I’m free-and-clear now.”

Robin’s husband, Jeff, had heart surgery during Nate’s sophomore year. Jeff Barrett, a Lucas graduate and former Madison assistant football coach under Sean Conway, suffered from a rare condition called aortic dissection. There are fewer than 200,000 cases diagnosed in the United States each year and, according to information provided by the Mayo Clinic, the condition is most commonly found in men in their 60s.

“With Jeff’s condition, it was touch-and-go,” says Conway, who is now the principal at Madison. “They didn’t know if he would survive.

“The Barrett family is a family the entire Madison community has rallied around. They are Madison.”

Watching both his mother and father deal with life-threatening maladies gave young Nate a new appreciation for life — and an even greater respect for his parents.

“Mom and dad are an inspiration to me,” says Nate, who was a Division III All-Ohio honorable mention selection as a linebacker last fall. “They taught me the importance of perseverance. It’s scary seeing your parents go through things like that, but I believed that God had a plan for them. I knew it would all work out in the end.”

Throughout all of life’s trials, Nate had wrestling, a sport he took up in elementary school. As a freshman, he was 30-12 at 126 pounds and advanced to the Division I Perrysburg district.

The injury bug bit during Nate’s sophomore year. He suffered a shoulder injury but still went 30-13 and placed sixth at 138 pounds at the Perrysburg district.

Madison dropped to Division II for Nate’s junior year, but his season was again interrupted by a shoulder injury. A slightly torn labrum in early-January cost him four weeks, but he returned in time to win an Ohio Cardinal Conference championship at 160 pounds, beating West Holmes’ Walker Uhl 4-2 in overtime for the crown.

The OCC championship served as a postseason springboard for Nate. He won a sectional championship at Clyde before hitting his stride at the Norwalk district. He stormed to the district crown with a pair of technical falls followed by a pair of first-period pins in the semifinals and finals.

“To go from having an injury (as a sophomore) to having another injury (as a junior) and battling back from that and doing as well as he was doing was amazing,” Mosier says. “He honestly was at his peak.”

And then adversity struck again.

The Ohio High School Athletic Association canceled the state wrestling tournament the day before it was to begin as the coronavirus pandemic took root last March. Both Nate and longtime drill partner and classmate Trenton Osborne were denied the opportunity of wrestling on the state’s biggest stage.

“Last year was tough on Nate and Trenton both,” Robin says. “As disappointing as it was, the one thing Nate and Trenton could hold onto was it was their junior year. They had another year. There were a lot of kids who lost their senior years last year.”

“We had a good draw going into the state tournament (last year) and to have that taken away, it’s still in the back of his mind right now,” Mosier says. “He carried that all through football and into the wrestling season. He’s wrestling every match like it could be his last.”

Nate won his 100th match earlier this season — no small feat considering all the lost mat time during his injury-plagued sophomore and junior years — and has his sites set on an even bigger prize. He’s ranked fifth in Division II at 182 pounds and is aiming for a return to the state tournament.

“I have dealt with some injuries, so getting that 100th win was pretty cool. Back in eighth grade I saw Carson (Speelman) get his 100th win and I thought that was pretty special,” Nate says. “But my main goal is to get back to state I feel like I can do it. I just have to believe in myself and trust in what I do.

“It would be awesome to get onto the podium at state. That’s always been my goal. Ever since I’ve been wrestling, we’ve gone to the state tournament and I’d watch guys get on the podium and I’ve always said, ‘That is where I want to be.’ ”

A return trip to the state meet would be even sweeter with Osborne by his side.

“Trenton has been my drill partner since the fifth grade. We have grinded through it together,” Nate says. “I have someone to talk to and he has someone to talk to. We both know how to push each other. Even when we’re having bad days, we know that we both still need to be pushed.”

Regardless of what happens during the next two months, Nate’s wrestling future is secure. He committed to Ashland University in late-October.

“It felt like home and not just because it’s 15 minutes away,” Nate says. “I’ve got some friends there and I like the coaches. I’ve been working out there and getting to know all the guys over the summer, it felt like the right fit.”

As far as Conway is concerned, first-year AU wrestling coach Colt Sponseller is getting a steal.

“Nate is a great athlete and a great student. He is going to be one of our valedictorians,” Conway says. “He’s a great representative of our school and our community. Madison should be proud.”