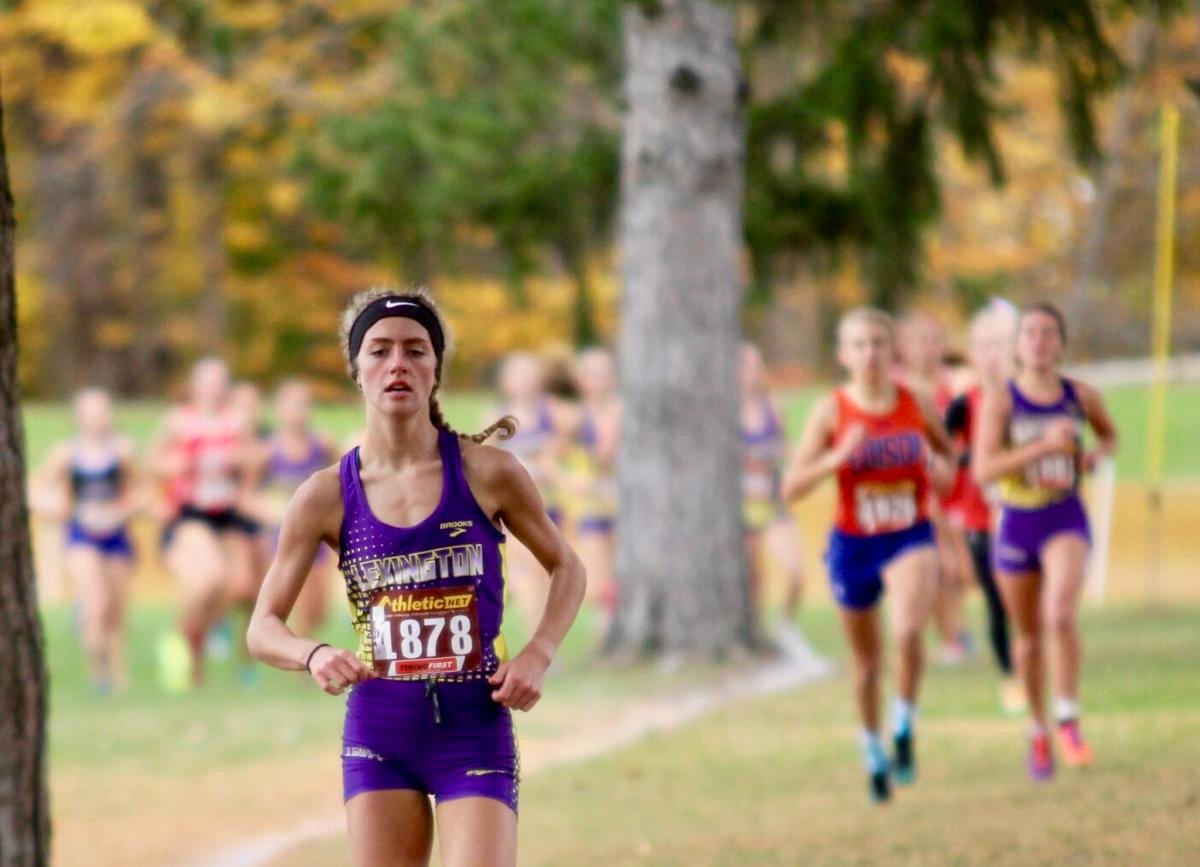 Lexington's Halle Hamilton leads the pack during the Division II race at the Galion district meet. 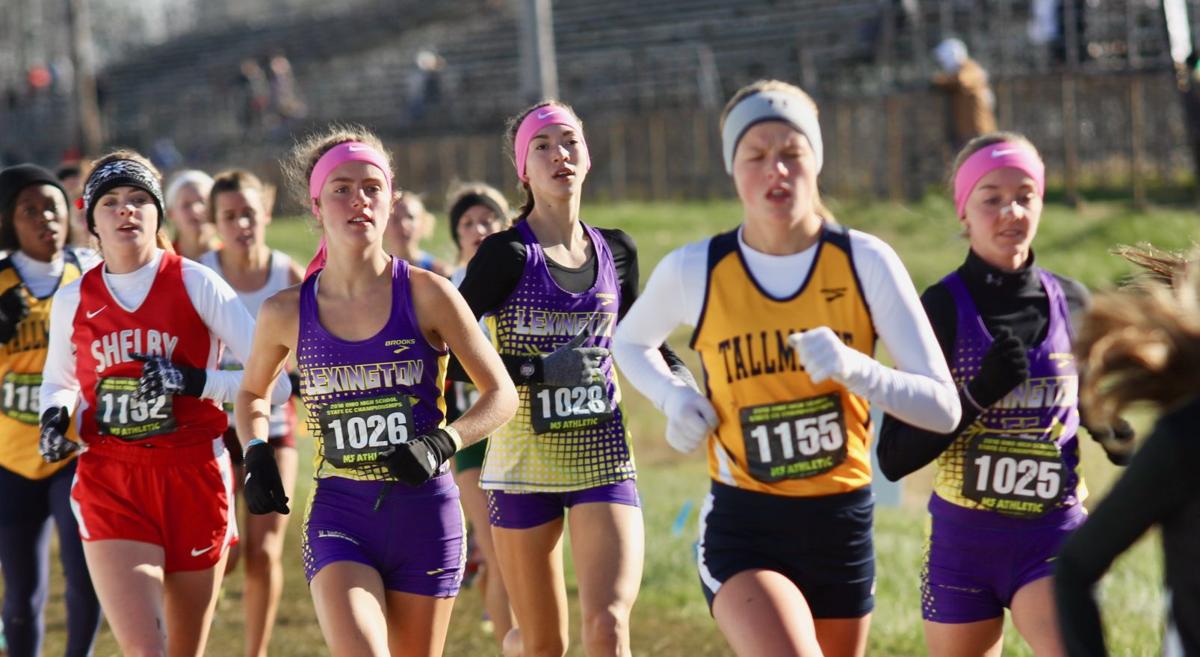 Lexington's Halle Hamilton (1026) runs near the front of the pack during the Division II race at Saturday's cross country state championships at National Trail Raceway in Hebron. 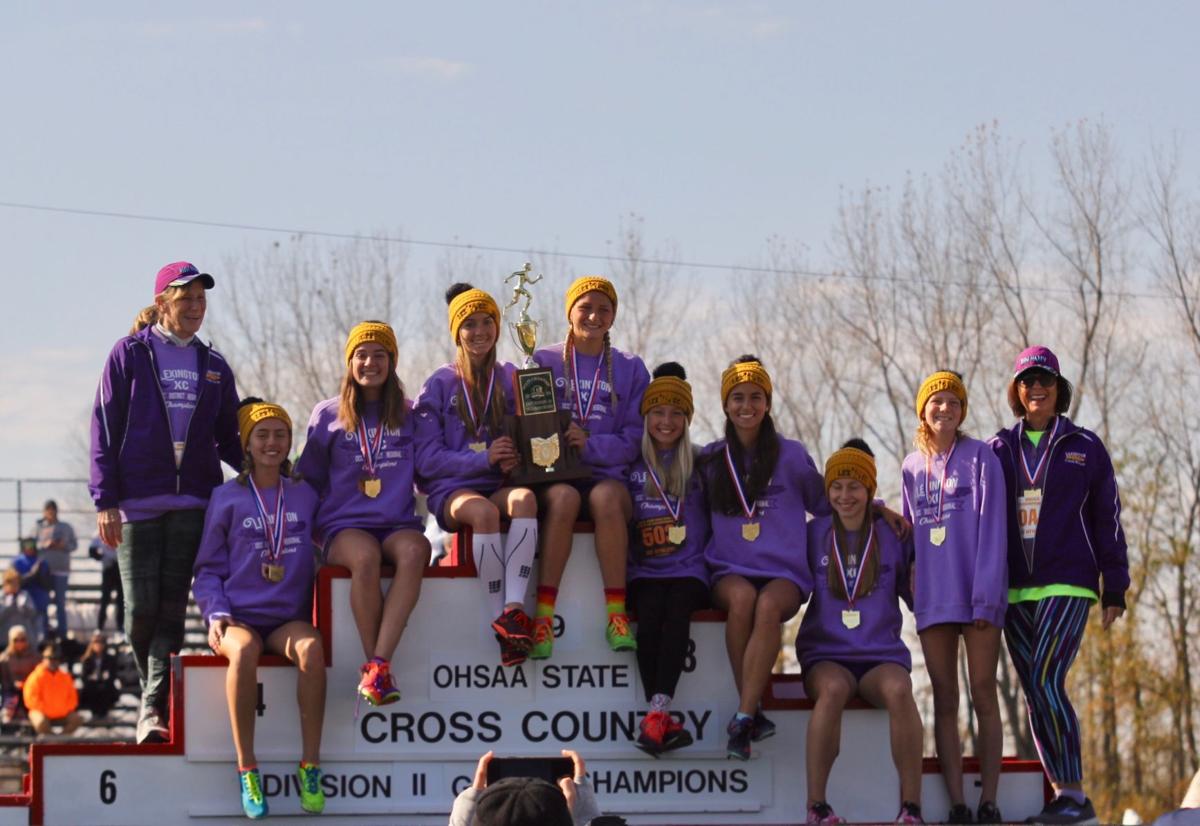 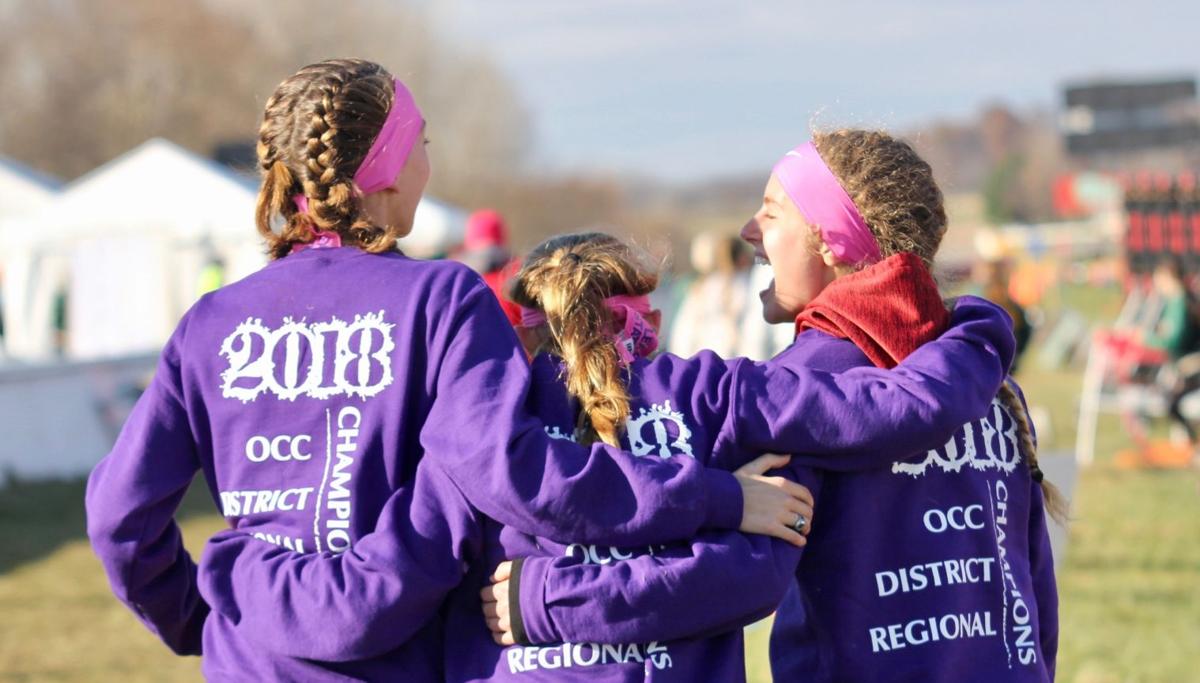 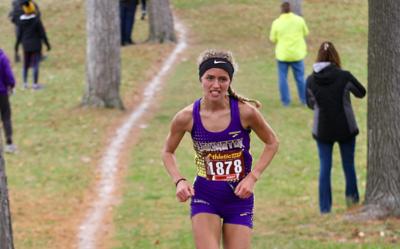 GALION — Temperatures hovered in the mid-40s under a gunmetal gray October sky as a biting wind blew out of the north.

Thunderstorms that rumbled through north central Ohio the previous night had left standing water in places along a normally-fast, five-kilometer cross country course at Amann Reservoir. The footing was sketchy at best and downright treacherous in places.

Judging by the steely look of determination on her face, none of it seemed to bother Halle Hamilton. Lexington’s senior distance ace was on a mission and a sloppy track was the least of her worries.

“It was really muddy and the footing was super-soft, so it was hard to get that push-off,” Hamilton said after winning her first individual district title and leading Lady Lex to their 12th consecutive team championship. “Today was a true cross country day where it’s based on grit more so than time.”

Grit, it turns out, is something Hamilton has in abundance. It was on display again Saturday when she led from start to finish, breaking the tape in 18 minutes, 35.4 seconds — almost 10 seconds ahead of runner-up and longtime nemesis Abby Lesniak of Milan Edison (18:44.2). Also a senior, Lesniak beat Hamilton for individual district titles in 2017 (Hamilton finished third) and again last fall (Hamilton was runner-up).

“It was a little disappointing. Last week I ran 18:03,” Hamilton said matter-of-factly. “I was hoping to beat that, but the conditions just weren’t right for today.”

While Hamilton may have been underwhelmed by the effort, she has learned not to dwell on performances that don’t meet her lofty standards. That hasn’t always been the case, longtime coach Denise Benson said.

“She used to have a little more anger, and I’m talking internal. After a race she would just beat herself up and she would get really angry and would have to leave for a while and come back before she would talk to me,” Benson said. “Now she (realizes), ‘I’m not a machine. I’m going to have some ups and downs.’ She’s handling that because you can’t think that every race is going to be a perfect race. She learned that and that’s a really good thing. It’s OK not to have a great day.

“From all the meets this season, she would probably say she was happy with one or two of them and that’s it. She has very high expectations, but again, instead of beating herself up, she’s just like, ‘OK, it wasn’t what I wanted, but I’ll do better next week.’ She’s really matured as an athlete in that regard.”

“She’s a completely different runner than her freshman year, physically and mentally and emotionally,” Benson said. “Not only is she more experienced — year-to-year, you just can’t replace that experience — she’s learned to push herself to a pain level she’s never experienced before.”

That set the stage for last year’s remarkable performance. Hamilton was third overall in 18:10 and Lady Lex made it a three-peat with a team score of 83. Granville (170) was a distant second.

Lexington is the overwhelming favorite to win a fourth straight state title and fifth in the past six years. Lexington has been atop the Ohio Association of Track and Cross Country Coaches Division II state poll and has garnered all 12 first-place votes each of the past two weeks.

““Right now we have all 12 votes,” Hamilton said. “That’s if … we’re lucky enough to get through the next couple of weeks without any mishaps or injuries. Hopefully we can put it all together.”

So how does this year’s team rank compared to some of the great teams of the past decade?

“The 2015 team with Dominique Clairmonte and Mackenna (Curtis-Collins) and Whitney (Wendling) and all those girls, coach calls that her Dream Team,” Hamilton said. “We’ve proven ourselves to be a pretty good match-up to them. So we’re like the ‘other’ Dream Team because we are a completely different set of girls. It’s cool to see how a completely different team can compare.”

If the 2015 team was Benson’s Dream Team, then Clairmonte was that group’s Michael Jordan. She won an individual state title in 2014 and finished fourth individually the following year, lifting Lexington to the top of the state podium for the first time after runner-up finishes in 2010, 2012 and 2014. Lady Lex was state runner-up again in 2016 before Hamilton and Co. arrived on the scene.

““This team is right there. It is absolutely right there,” Benson said. “You know you have to be able to put it together when it matters … and if we get to the state line, they could go after that Dream Team. They absolutely can.

“I just ask each young lady to leave it out there. That’s our focus, turn the watches off and just go compete.”

If all goes according to plan at this week’s Tiffin regional, Hamilton will get the chance to take a swing at the one thing that has eluded her thus far — an individual state title. She will likely run into some familiar competition at Fortress Obetz, site of this year’s state meet. Ella Gilson, a senior at Hawken, is the two-time defending Division II state champ and Dayton Oakwood junior Grace Hartman is the two-time defending Division II state runner-up.

“I don’t want to talk about two weeks from now, but she has a shot. She has a shot at a state title,” Benson said. “The other two girls coming back, I hope it’s a battle. That would be great to see.”

A run at an individual state crown would likely require a personal-record performance from Hamilton, whose PR of 17:50 came last year at Centerville. That would put Hamilton in the rarified space currently occupied only by Clairmonte, who set the school record of 17:29 at Marion Harding in 2014.

“Time is never supposed to be the goal, but when you have the ability and the coaching that can get you there … these past few years I’ve wanted to reach that,” Hamilton said. “Last year I came pretty close with a 17:50 and I’m hoping to get under that again this year.”

That is, of course, if there is a conclusion to the 2020 season. The newest surge of the coronavirus and stringent contact tracing protocols have everyone on edge.

“The whole contact tracing has thrown an element of stress in there. You can control wearing your mask and trying to stay healthy and the decisions you are making, but you can’t control who you’re sitting next to in class,” Benson said. “That’s their biggest fear right now. At the end of the day we only can control what we can control and that’s what we’re trying to focus on.

“You can’t live in fear. On the other hand, we’re all too aware that things can change in a day’s time.”

Stress is nothing new to Lady Lex. Hamilton and her classmates have had a bull’s-eye on their backs since the fall of 2017.

“Definitely my freshman year we felt the pressure a lot because the competition was a lot closer. As the years go on and we became more experienced, we knew what to expect,” Hamilton said. “We’ve had extremely difficult competition. We’ve competed at Centerville. We’ve competed at Portage, Michigan. They’re insanely huge meets. They’re bigger than the state meet. We competed at NXR (Nike Cross Regionals), which is the biggest race I’ve ever ran in in my entire life. We are definitely used to that kind of intensity and pressure from other teams.”

A fourth consecutive state team title would be Hamilton’s crowning achievement. She had hoped to qualify for the Nike Cross Nationals, but the national event and the regional races have been canceled because of the coronavirus.

“She wants this so bad,” Benson said. “She has persevered through the fact that she really wanted to try to qualify for nationals and they canceled Nike. She actually spoke to the underclassmen and said, ‘Look, we race like this is our last race.’ That is what I try to teach them. “