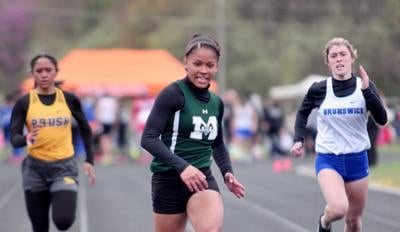 Already a household name in area girls soccer circles, Lewis is running track for the first time this spring. The early returns have been nothing short of sensational.

The diminutive Lewis made her debut at the season-opening Madison Invitational, winning both the 100 meter dash and the 200 meter dash. She broke the tape in the 100 in 12.60 seconds and had a winning time of 25.99 seconds in the 200.

“I feel like my progress is good,” Lewis said at the time. “I feel good about where I’m at, but I think I can do better. I just have to keep working on it.”

When asked which sport she preferred, Lewis never hesitated.

Anyone who followed Madison’s run to the Division II girls soccer state title last fall knows all about Lewis’ uncommon speed. She scored 19 goals on the season, including both goals in Madison’s 2-1 win over Granville in the championship game at MAPFRE Stadium in Columbus. She made her high school debut with three goals in the first half of a 5-0 win over Clear Fork.

“She’s faster than anyone I’ve played with,” said Ohio’s Ms. Soccer and Madison’s four-time All-American Taylor Huff, who has spent the past several years playing with and against elite players from all across the country and will continue her career at the University of Tennessee. “She’s just so fast … Nobody can catch her. I’ve never met someone faster than her.”

“She’s a freak. She is an X factor any time she’s in the game,” Zac Huff said. “She’s pretty quick, that’s for sure. I’m not surprised at all that she has been successful in track. She’s quick and she has that mentality. She’s a competitor.”

Lewis’ willingness to compete is what Saris has been most impressed with early in Lewis’ running career.

“She’s like a lot of girls in our building right now. She likes to compete and she likes to win, which is pretty cool,” Saris said. “She’s growing fond of the sport. She just didn’t know what it was about other than just running. She’s enjoyed a lot of success so far. She’s pretty special.

“This is when I knew early on, that she was going to be good. There are some technical aspects to the sport, exchanges and the use of blocks, and she really picked up on those things quickly. The things in our sport that usually take the most teaching, she picks up on. She’s a quick learner and she’s a very smart girl.”

Among the biggest challenges for Saris moving forward is determining which events Lewis will compete in during the postseason. Madison competes in Division I in girls track and will be in action at the Findlay district in May. The next few weeks will be used to formulate a plan.

“With Nevaeh, she’s always going to be a great 100 and 200 runner and she’ll run the 400 when we need her because she’s great at that, too,” Saris said. “And as part of some relays, we could maybe do some things postseason-wise. I don’t know if it’s completely unfolded, but I know it’s going to be some combination of 100, 200 and 400.”

The 5-foot-4 Lewis will be competing against much bigger athletes who are two or three years older once the postseason rolls around. Saris isn’t especially concerned.

“She’s not a tall girl. That 5-foot-7 frame is more traditional, but I can think of some really good sprinters from Mansfield Senior not too many years ago who weren’t big girls,” Saris said. “As far as physically intimidating, that’s not going to be her.”

She’ll face the same obstacles next fall as the Rams begin their Division II state title defense. Lewis will be the centerpiece of a Madison side that will lose several key pieces to graduation, most notably Taylor Huff.

“Most of your college soccer prospects are bigger. She’s short but she is thick and strong,” Zac Huff said. “She needs to figure out how to not do everything at such a quick pace because not everybody is as quick as her. Sometimes she gets going too fast. She is faster at 80 percent than most players at our level are at 100 percent.

“She’ll be up for the challenge physically.”

As for Saris, he can’t wait to see how Lewis develops over the course of her high school track career.

“She’s just a super competitor. She hates to lose.”