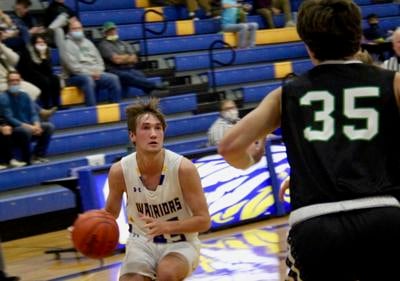 ONTARIO — The celebration was short-lived, lasting only as long as it took Griffin Shaver to acknowledge the appreciative — albeit sparse — O-Rena crowd and hand the basketball to his mother in the bleachers.

Then the newest member of Ontario’s exclusive 1,000-point club went back to work.

For Shaver, reaching the milestone wasn’t nearly as important as finishing off the win over Mid-Ohio Athletic Conference rival Clear Fork, which the Warriors would do thanks in no small part to Shaver’s 13 points. He scored 10 in the fourth quarter, including a baseline 3-pointer over the outstretched hand of Clear Fork’s Brady Tedrow to give him 1,000 points and the Warriors the lead for good with about two minutes remaining.

“I wish I would have got going a little bit quicker, but it’s OK. It worked out,” said the unassuming Shaver, who is just the fifth player in program history to eclipse the 1,000-point plateau. “It means a lot. It’s awesome to be with the greats of Ontario, but I think what was more awesome was that win.”

That team-first approach comes as no surprise to longtime Ontario coach Joe Balogh. A 2019 Ohio High School Basketball Coaches Hall of Fame inductee, Balogh has coached all five of Ontario’s 1,000-point scorers in his 36 seasons in charge.

“Grif is more than just a scorer,” Balogh said at the time. “He’s proven that throughout his career.

“We haven’t had a bunch of them and in a way that is a compliment to our program because of the way we like to share the ball.”

Sharing has always been a part of Shaver’s DNA. He averaged five assists a game last year and is among the early MOAC leaders at four assists a night this season.

Shortly after scoring his 1,000th point against Clear Fork, Shaver found fellow senior Kolten Kurtz alone in the corner for a transition 3-pointer. Shaver showed more emotion after the assist than he did after scoring the milestone bucket moments earlier.

“Me and my buddy Kolten love that 3-point line,” Shaver said. “Whenever we get those assists to each other it’s awesome.”

The 6-foot-1 Shaver comes by his scoring ability honestly. His mother, Jenny (nee Kaple), starred at Buckeye Central in the mid-1980s, scoring almost 1,000 career points and helping the Buckettes win a Class A state championship in 1985. She was an Associated Press Class A All-Ohio second team pick in 1987.

“My mom was a great high school basketball player,” Shaver said. “I need to thank her.”

He’s averaging almost 13 points a game so far this season. The Warriors slipped to 7-2 overall and 3-1 in the MOAC after a 65-60 loss to conference leader and defending MOAC champ Shelby on New Year’s Eve. The rematch with the Whippets (5-1, 3-0) is Jan. 15 at Ontario.

That is, of course, if basketball is still being played in two weeks. A post-holiday spike in COVID-19 cases is widely anticipated by health experts and most area programs — including Ontario — have already been through a quarantine this season.

For Shaver, a potential college basketball player who is still unsigned, lost games mean lost opportunities. He already lost almost all of his final AAU season over the summer.

“I want to play at the college level and this is definitely a setback,” Shaver said at the time. “This is the most important (AAU) season for me and college coaches can’t come see me in person. All they can do is see game film.”

No matter what the future has in store, Shaver will go down as one of the greatest players in Ontario’s storied history. He joined a fraternity that includes 1990 graduate Chris Morris, Benji Hall (2001), Bryan Moloney (1995) and Cam Mack (2014).

“A thousand points means a lot to me,” Shaver said. “I couldn’t have done it without my coaches and my team.”

If you are an opposing basketball player, Luke Denbow takes offense at your offense.