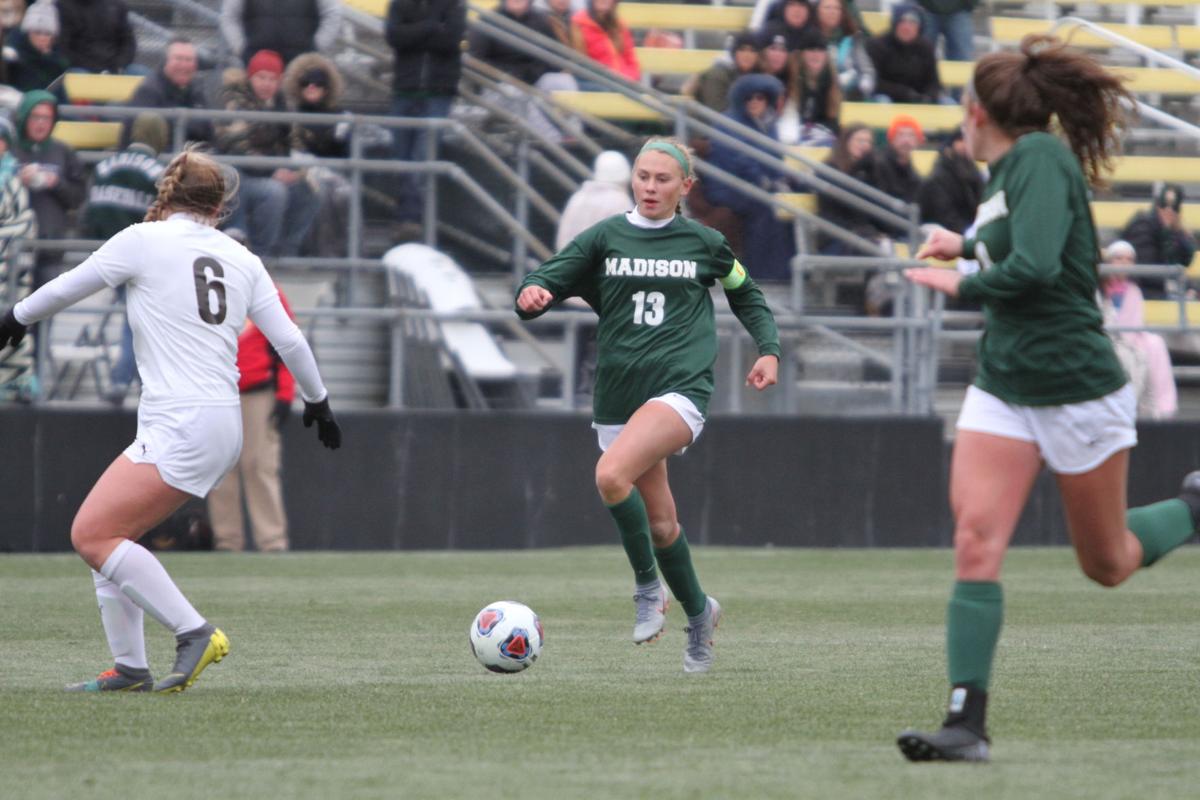 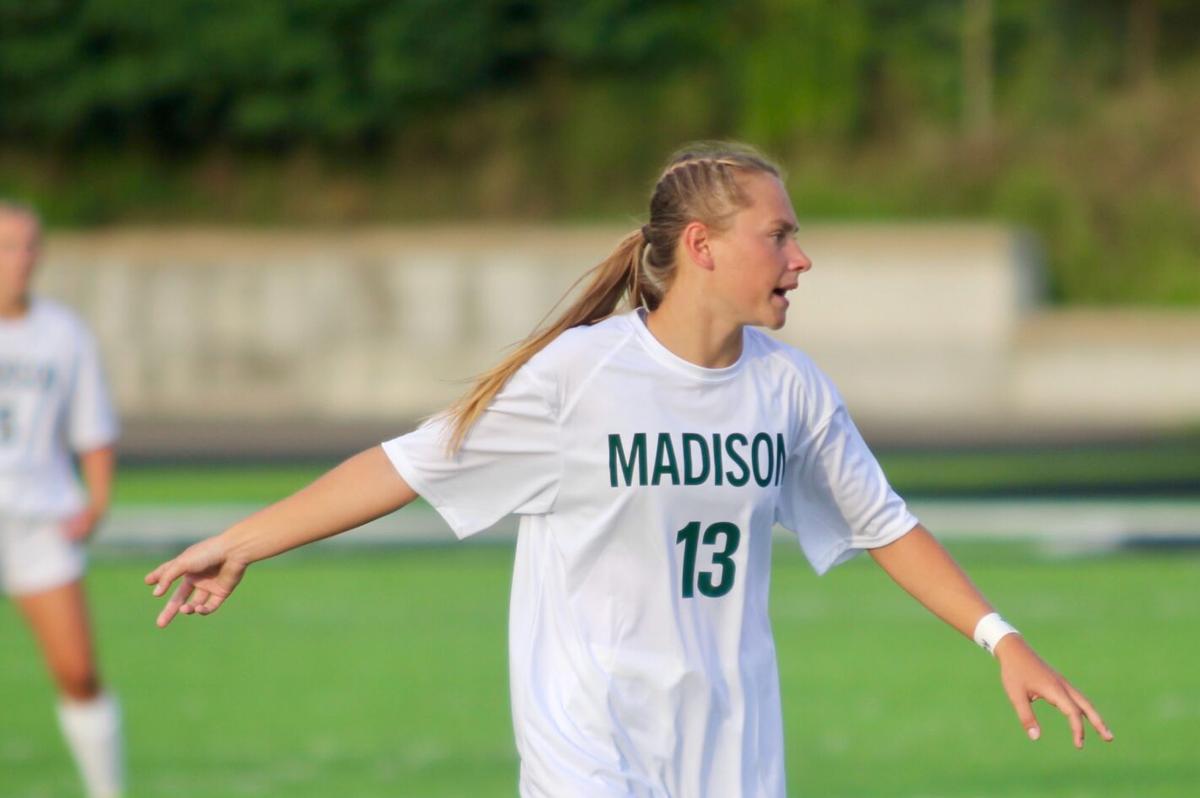 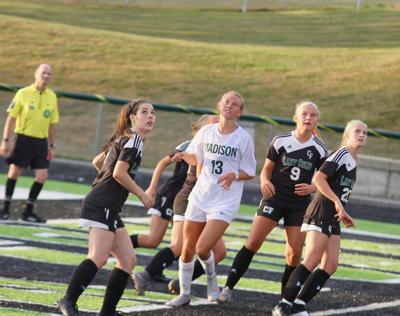 MADISON TOWNSHIP — Doug Rickert didn’t expect to find anyone at Madison’s soccer complex early on that Sunday morning in late-August, but the school’s longtime athletic director wasn’t especially surprised when he saw whose car was in the parking lot before his.

Nothing Taylor Huff does shocks Rickert.

The state’s reigning Division II Player of the Year and a three-time All-American, Huff scored her 100th career goal two nights earlier in a season-opening 5-0 win at Clear Fork. The celebration, it turned out, was short-lived.

Huff is most definitely going places. She committed to the University of Tennessee during the spring of her freshman year and will begin the next chapter of her soccer odyssey next fall in Knoxville.

The journey started more than a decade ago when Taylor, the second of Zac and Amy Huff’s three daughters, began playing soccer with her older sister in the driveway.

“We grew up kicking a ball at the garage door,” says Hayley Huff, Taylor’s older sister and a 2018 Madison graduate. “It’s been surreal watching her develop into the player she is today.”

“She was playing 10U at 6 years old and she was dominating,” says Zac Huff, in his sixth season as Madison’s varsity girls soccer coach. “She was one of the best players out there at 6.”

Zac Huff, who was a member of Madison’s 1992 Final Four boys soccer team, knew it wouldn’t be long before Taylor outgrew recreational soccer leagues. So, he and Ontario’s Jeremy Bise founded the Mansfield Crew club team.

“My wife was coaching Hayley and they were playing Jeremy’s Ontario rec team and they weren’t getting anything out of it,” Zac Huff says. “So we came up with a club team with Madison and Ontario girls and started playing club in the NOGSL (Northern Ohio Girls Soccer League) out of Cleveland.”

Taylor continued to climb the club ladder, eventually landing with the Medina-based Internationals Girls Soccer Club. Internationals is widely regarded as one of the premier youth club teams in the nation and plays in the Elite Clubs National League.

Zdravko Popovic founded Internationals in 1976 and has served as the organization's president ever since. He has trained and coached thousands of players and Huff, he says, is among the best.

“Taylor has abilities and potential to be in consideration for our national pool. She’s that gifted and that good,” says Popovic, a 2010 Ohio North Soccer Hall of Fame inductee. “She has God-given natural talent but talent alone is not good enough. She’s driven, she’s committed, she’s disciplined and she’s inspiring.

“She not only works hard, but she competes every day. There is a difference between working hard and competing. With that kind of approach, I believe her journey is going to be bright and rewarding.”

Traveling the country and playing against high-level competition opened several doors for Taylor. She was recruited by several major college programs at an early age and committed to Tennessee in March of 2018.

“Tennessee saw her play in Phoenix and San Diego. Tennessee recruited her and she did visits to North Carolina and West Virginia. There were several other schools that contacted her coach at Internationals, Zdravko Popovic,” Zac Huff says. “We never expected any of this.”

Taylor was well-known on the club circuit, but Rickert didn’t know what to expect from the unproven freshman in the fall of 2017. He soon found out.

In her first high school match, Taylor scored four goals in a 4-2 win over Clear Fork.

“I have to admit, I never knew she was going to be that good. Then in her first varsity game she scores four goals,” Rickert says. “Already the first time she’s out there, she looks better than the other athletes out there. Division I kids, I don’t care what sport it is, always look different and she just flat out looked different.”

Paired with her older sister and a talented group of seniors in 2017, Taylor scored 34 goals and had 21 assists as the Rams went 21-2-0 and reached the Final Four for the first time in program history. Madison dropped a 1-0 heart-breaker to Mentor Lake Catholic in the state semifinals.

“Looking back on that, I didn’t even realize how impactful that year was on my life until now,” says Hayley Huff, who played one season at Mount Vernon Nazarene and now attends Ohio State. “At the time I thought it was cool, but I didn’t realize. I wish I could go back. It’s crazy to think that happened.”

The following year, Taylor scored 31 goals and had 19 assists as Madison won a second consecutive district title. The Rams were ousted in the regional by eventual state runner-up Bay.

That set the stage for a memorable 2019 season. Madison captured its third straight district title and advanced to the state championship match with a memorable 1-0 win over Chagrin Falls in the state semifinals. The Rams fell to 2-0 to Kettering Alter in last year’s finals.

So far in 2020, the Rams are 8-0-1 and ranked No. 1 in Division II in the Ohio Scholastic Soccer Coaches Association state poll. Taylor has 12 goals and 10 assists in nine matches.

The emergence of freshman Nevaeh Lewis this fall has allowed Taylor to be more of a distributor. Lewis has eight goals, including three in her first career game against Clear Fork.

“Playing with her is a dream come true,” Lewis says. “She can push me to be a better soccer player.”

Like her sister and her classmates did when she was a freshman, Taylor and Madison’s 10-player senior class has taken a talented freshman group under its wing.

“I tell the freshmen, they don’t know how good they’ve got it with this year’s senior class,” Zac Huff says. “Before we knew if we were going to get to play this season I said the biggest detriment for the program would be if these freshmen didn’t get to play with these seniors and learn from them.”

As gifted as the 5-foot-8 Taylor is physically, it’s her work ethic that distinguishes her from her peers.

“She’s probably the most humble kid on the team. You always hear people say the best player on the team has to be the hardest worker and she fulfills that, too. She’s always the first one in drills. She never takes plays off.”

So what is the dynamic like between one of the state’s best players and her father/coach?

“Early on, during Taylor’s freshman year, we decided we would leave soccer at the field and not bring it home because we’d argue over what we could have done differently. Now we don’t even talk about it at home.”

With the COVID-19 pandemic still raging, there is no guarantee the season will be played in its entirety. Madison fans should appreciate whatever time they have left with Huff, Rickert says.

“You’re just not going to get someone like her again for a long, long, long time,” Rickert says. “That’s why I tell people to enjoy it while we have her.”

As for Taylor, she’s just happy to have one more fall with her classmates.

“We’ve put in so much work,” Taylor says. “It’s so rewarding to see this happen.

“I’m so proud of everyone.”