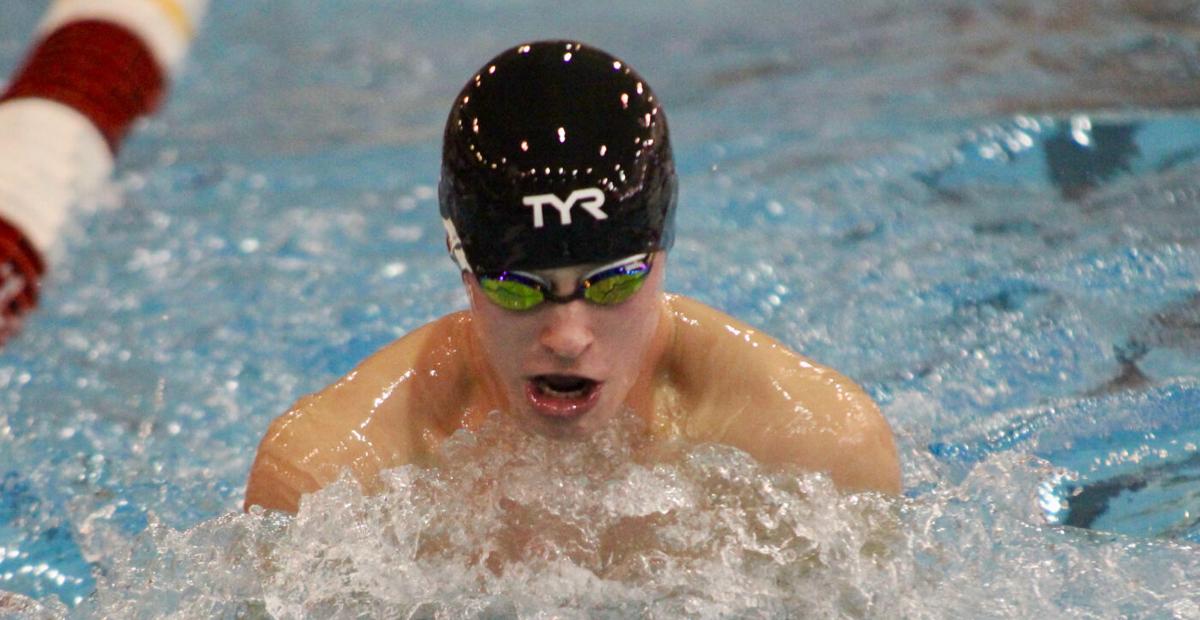 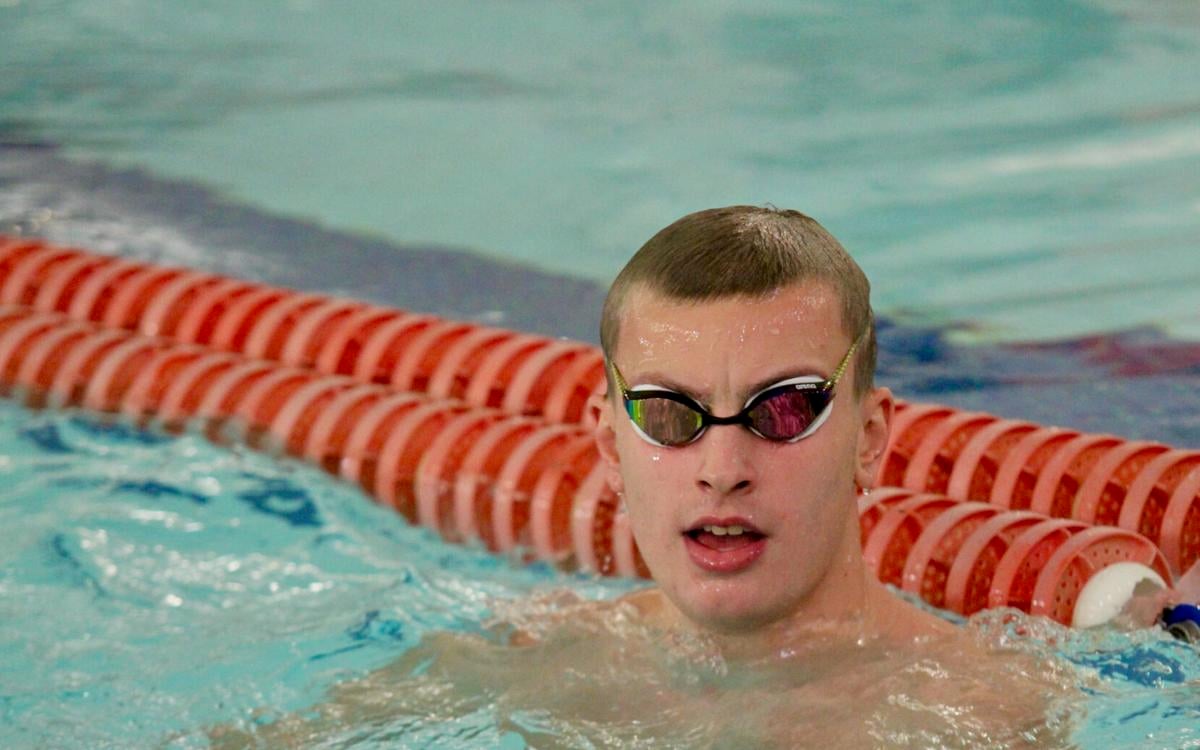 Lexington's Ben Starling warms down after an event at the sectional meet at Malabar. 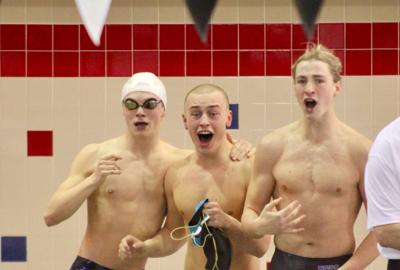 LEXINGTON — Ben Starling did his best to maintain his composure, but with each passing stroke the Lexington senior’s emotions came bubbling to the surface.

By the time his younger brother, Lucas, touched the wall late Thursday afternoon at Canton’s C.T. Branin Natatorium, composure — from the elder Starling or any other member of Lexington’s 200 yard medley relay team — was in short supply. The time on the scoreboard confirmed what they already knew.

“It was a rush of emotions,” Starling said shortly after he and his brother, along with Jacob Hathaway and Tanner Holmes collected their gold medals at the Division II boys state meet. “This is what I’ve wanted and what we’ve been working for.”

Starling’s odyssey to the top of the state podium began in the 2018-19 season, before the then-sophomore could crack the medley relay lineup. The 2018-19 foursome of seniors Cayman Eichler, Justice Holmes, Wilson Cannon and Connor Miller was seeded first at the state meet after swimming a meet and what was then a school record of 1:35.59 at the Bowling Green district. That quartet finished fourth at state in 1:35.95.

Longtime Lex coach Brock Spurling admitted to some tactical errors with the 2019 unit in the run-up to the state meet. He wasn’t going to repeat them this time around as Lex came in seeded second behind Ohio Cardinal Conference rival Ashland.

“We were seeded first two years ago and I don’t think I did a very good job of keeping the kids focused throughout the week,” Spurling said. “This week we didn’t talk about it. It was business as usual. It was, ‘Let’s take care of what we do in the pool and whatever happens, happens.’ ”

The foundation for Thursday’s championship was put in place last year. Ben Starling, Hathaway and Holmes teamed with senior Andrew Hathaway to finish seventh at state in 1:37.94.

Lucas Starling slotted in for the older Hathaway in the freestyle leg this winter, while Jacob Hathaway returned as the leadoff man in the backstroke, Ben Starling was back in the breaststroke and Holmes returned at butterfly.

“Three of us were on last year’s (medley relay) team,” Ben Starling said. “This is what it turned out to be, me and Jacob and Lucas and Tanner, and I’m very proud of what we did. It wouldn’t have been possible without them.”

Lex and Ashland duked it out at the Ohio Cardinal Conference meet at Wooster in mid-January and again at the district. The Minutemen edged the Arrows by .04 to take the OCC title. Ashland turned the tables at the Bowling Green district, finishing in .1 ahead of Lex.

“We know Ashland well and they know us well,” Spurling said. “Because of COVID, we weren’t able to travel to a lot of our bigger meets so we had more duals with Ashland. We’ve seen that medley relay play out multiple times this year.”

On Thursday Lex got off to a solid start. Hathaway swam the backstroke leg in 24.49 seconds, leaving the Minutemen in third place in the third and final heat behind Cincinnati Seven Hills (22.64) and Cincinnati Indian Hill (23.05).

Then came what will go down as arguably the greatest relay leg in Lexington history. Ben Starling turned a 1.85 second deficit into a .27 lead, swimming the breaststroke leg in a jaw-dropping 25.93 seconds.

“I don’t know if it was the competition or the rush of adrenaline. I don’t even know,” Starling said. “I barely remember what happened. I remember I dove into the water and hit the wall and that was about it.”

How fast was Starling? He swam what was at the time the fastest 50 breaststroke split in program history at last year’s state meet, touching the wall in 26.69 seconds. He was an impossible .76 faster Thursday.

“We had four very strong legs but when you look at it, our middle hundred was fantastic,” Spurling said. “That middle hundred really won that relay for us. It was the difference for us.”

By the time Lucas Starling hit the water, Lex held a commanding .30 lead over Indian Hill in what by that time had become a two-team duel for the state crown.

“After the backstroke it was really close so I knew what I needed to do. I needed to push myself as hard as I could and leave it all in the water,” Starling said. “When I hit the wall and I had caught up to both other people, I saw Tanner dive in and we had this tiny lead and I was like, ‘I think we’ve got it.’

“When Lucas dove in, we were watching the turn and they all flipped at about the same time. It was super-stressful. When I saw them coming into the wall, I saw Lucas had a little lead. We all started hugging. It was the best feeling. It was amazing.”

The victory was the curtain-raiser for a remarkable meet for both Starling and Lexington. Starling would place 15th in the 200 individual medley in 2:00.73 despite the quick turnaround from the 200 medley relay. He swam a leg of the 200 freestyle relay team that placed 18th in 1:31.68 and scored points by finishing 10th in the 100 breaststroke in 59.86 seconds.

Lexington finished in fifth place in the team standings with 98 points, 40 of which came courtesy of the winning medley relay team.

Starling will graduate as a five-time All-Ohioan — the top 16 finishers in each event earn All-Ohio status. He was a three-time qualifier in the 100 breaststroke, finishing 12th as a junior after being disqualified in the prelims for an illegal kick as a sophomore.

What’s more, he was a member of Lexington’s first ever state championship relay team. The quartet joined former Lex great Hannah Stevens as the school’s only swimming state champs. Lex’s state-championship time of 1:34.66 not only broke the former school record (1:34.59) by almost a full second, it put the Minutemen in contention for All-America status. The provisional All-America qualifying time is 1:34.74.

“Brock told us we were up for consideration for All-American and I said, ‘This can’t get any better,’ ” Starling said. “I don’t know if we’ll get it, but it’s just awesome to be considered.

“I think we all knew we could do it. We said, ‘Let’s go for the school record and if we get it, everything else will take care of itself.’ ”

Winning the state title was an appropriate way for Starling to cap his high school career.

“Ben is the lone senior on that relay team and this is a fitting tribute. I’m so excited for him,” Spurling said. “His breaststroke leg did it and we carried on. It’s a surreal feeling. It brought tears to my eyes.”