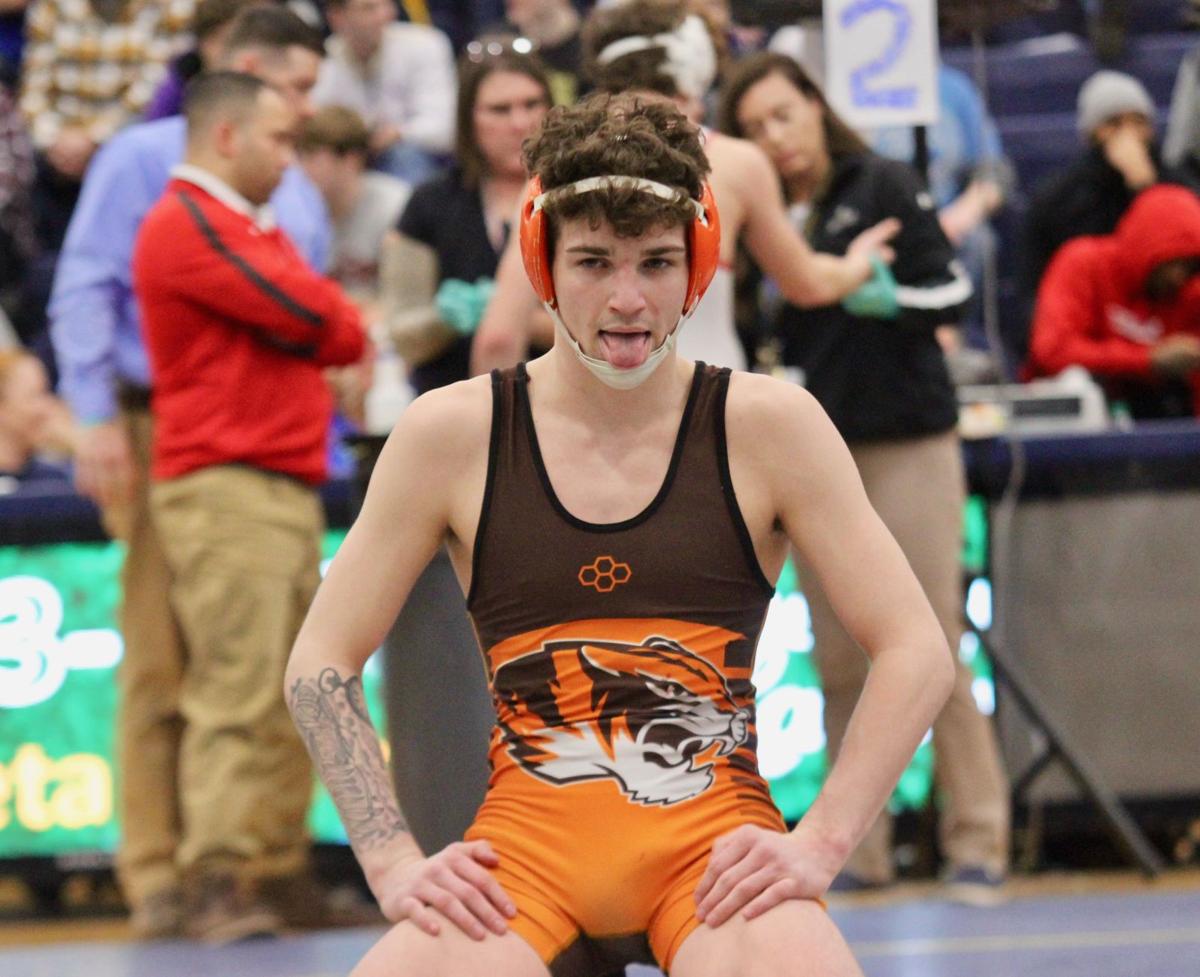 Mansfield Senior's Josh Lyons catches his breath during 132-pound championship match at the Norwalk District tournament. Lyons finished second and qualified for the state tournament, which has officially been cancelled. 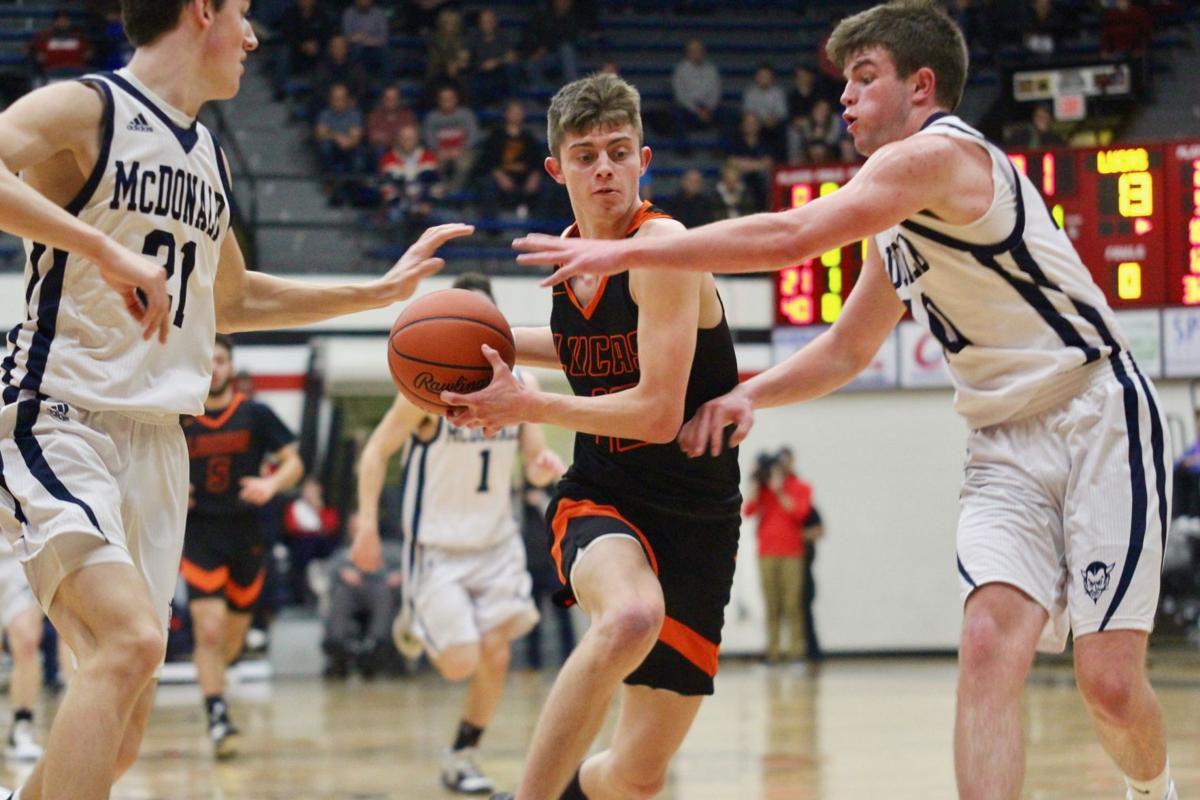 The Lucas High School boys' basketball team, which had earned a spot in the Division IV regional finals, saw its tournament hopes officially ended on Thursday.

COLUMBUS — The Lucas boys basketball team and a collection of local wrestlers saw their high school seasons come to an official, premature end on Thursday.

The OHSAA announced early Thursday afternoon it's canceling the previously-postponed remaining winter sports tournaments because of the ongoing coronavirus pandemic.

The decision affects wrestlers from several area schools who had qualified for the state tournament, as well as the Lucas boys basketball team, which was still alive in the Division IV regional tournament.

"We knew it was probably coming, but it still hurts nonetheless," Lucas athletic director and boys basketball coach Taylor Iceman said. "We were holding out hope for a different outcome.

"My heart breaks for our entire team, especially my four seniors."

According to OHSAA Director of Communications Tim Stried, it’s the first time since World War II that OHSAA-sponsored tournaments have been canceled.

“We are just devastated that the tournaments cannot be completed,” Snodgrass said in a press release.

“But our priority is the safety of our student-athletes, coaches, communities and officials. Governor Mike DeWine is asking all Ohioans to do everything they can to stop the spread of this virus. That request, along with our schools not being able to reopen for weeks, means that school sports cannot happen at this time.

“Even if our schools reopen this spring, it will be difficult to find facilities willing to host the tournaments. Most campuses are shut down until mid to late summer," Snodgrass said.

In an interview with Youngstown CBS affiliate WKBN, Snodgrass said the OHSAA is still weighing its options for spring sports.

DeWine ordered a three-week closure of all schools earlier this month. The shutdown is set to expire April 3, which means schools could re-open April 6, but DeWine has indicated schools may remain closed for the remainder of the school year.

President Donald Trump said earlier this week said he would like to see the country up and running by Easter.

“When the President came out and said he hopes to have everything open by Easter, I have to weigh that … carefully. It is the President talking, but that also contradicts our local (and) state authorities. That kind of clouded the issue a little bit," Snodgrass said.

For now, the OHSAA-mandated no-contact period for springs sports athletes remains in effect. The order was put in place on March 17 and expires April 5.

“It’s rough. It just reminds you of what retirement will be like,” Clear Fork athletic director and longtime softball coach Jeff Gottfried said of the layoff earlier this week. “We told our girls just to do what they can. The saying I use a lot, and I always have, is in the spring-time you’re on until you’re off.

“Right now we’re still on, so we just keep hanging on to that little glimmer of hope that we have.”

“It kind of feels like a long rain-event,” Fisher said. “Everyone in Ohio is getting rain and sitting at home.

“This whole process started at the professional level and jumped to the NCAA. They’ve already pulled the plug on their seasons and we’re still waiting. There’s a glimmer of hope, but reality is what it is.”

For now, Snodgrass and his team at the OHSAA are keeping their fingers crossed.

“We still feel confident that we could do something creatively — that won’t be the full season, without a doubt — even if we go back May 1,” he told WKBN. “I hold a lot of hope out for the spring seasons.

“I know people want to know and I get that. I want to know. I could sleep easier at night. But again, it’s probably going to happen sometime soon. We can’t drag it on forever.”

The OHSAA is doing its best to navigate through what is an unprecedented situation, Snodgrass said. He hopes that high school athletes, especially seniors, understand.

“It’s not my organization or our organization that’s taking this away from them right now,” he said. “It’s a horrible virus that we’ve never had to deal with, at least in my lifetime.

“I’ll take the responsibility for the decisions, but I think kids need to understand that.”