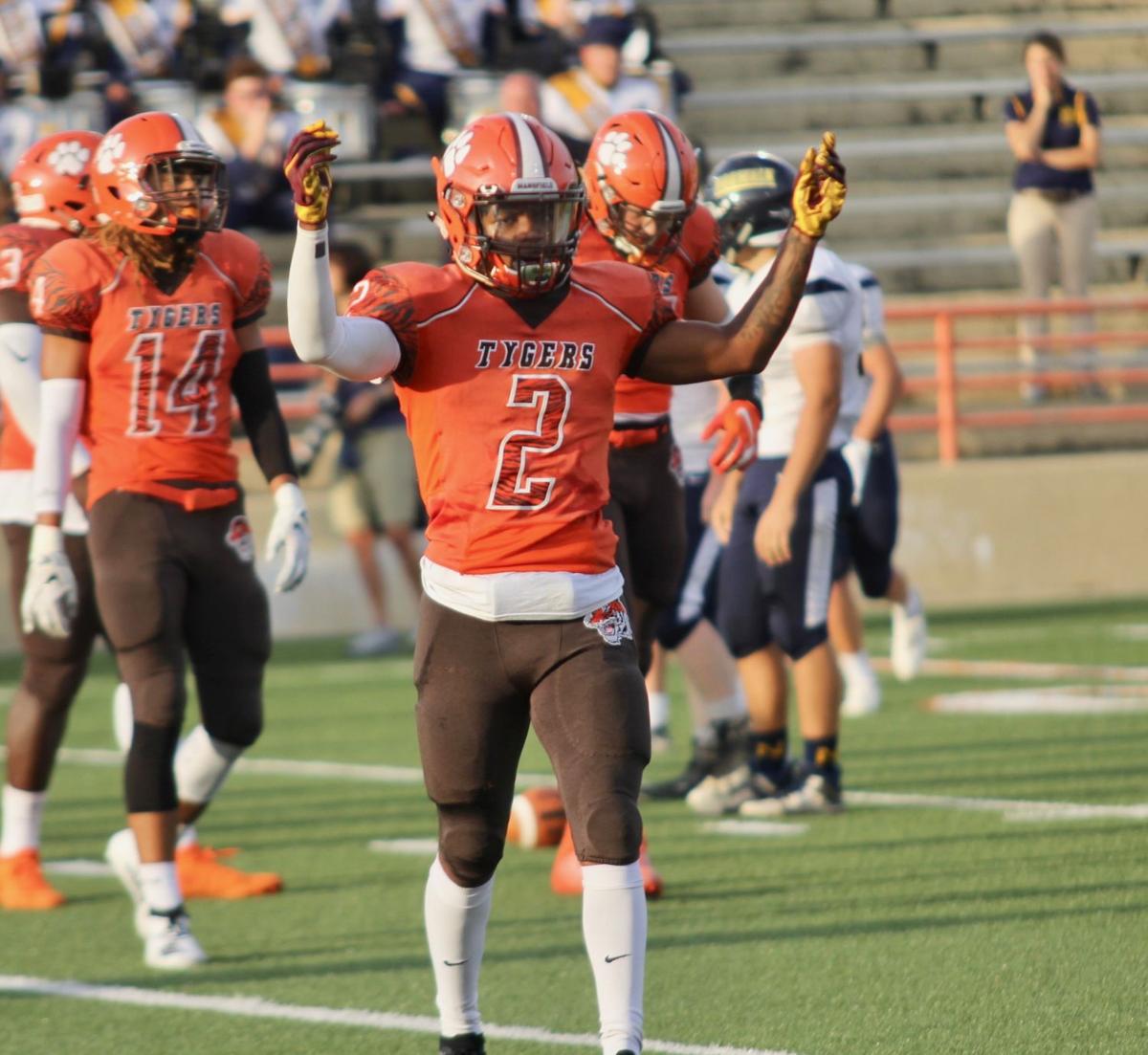 Mansfield Senior's Cyrus Ellerbe gestures to the sideline in the season-opener against Norwalk. 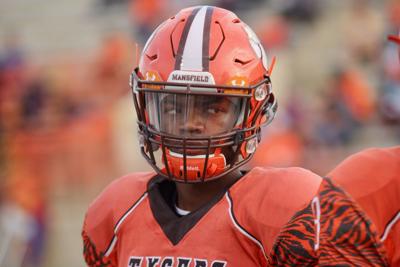 MANSFIELD — Snow flurries were flying Thursday afternoon at Arlin Field as Cyrus Ellerbe and his Mansfield Senior teammates finished their walk-through in preparation for Friday’s playoff opener against Bay.

He may not be as accustomed to the frigid temperatures forecasted for Friday evening as his teammates, but Ellerbe isn’t about to let Mother Nature stand in his way. After all, he’s been waiting for this moment since he returned to his hometown from South Carolina more than a year ago — and he wasn’t sure the opportunity would ever present itself.

“The weather here is totally different than it is in South Carolina. It’s probably still warm down there right now,” Ellerbe said Thursday as he hustled out of the elements and into the warmth of the Senior High locker room. “It’s snows there sometimes, but it doesn’t stick. When it snows here, it’s like inches.

The weather notwithstanding, Ellerbe couldn’t be happier to be back in Mansfield. He lived in town through the fifth grade before moving to South Carolina with his father.

When his father experienced some health problems last fall, Ellerbe returned to town to live with his mother. He was not permitted to play football, however, as the Ohio High School Athletic Association looked into the circumstances surrounding his return to Mansfield.

“It was tough on him and it was tough on me, too,” Mansfield Senior coach Chioke Bradley said. “I felt so bad for the young man because I felt like he got a raw deal from the state of Ohio.

“We petitioned the state to see if he could play, but they decided against it. We appealed it, but they didn’t allow him to participate here because he was participating down there (before the move to Mansfield).”

Sitting out his junior season was a nightmare for Ellerbe.

“It was real hard because I wasn’t allowed to play the sport I love,” he said. “The guys on the team were real supportive. I knew some of them from when I was younger and they welcomed me back. It was like I never left.

“The coaches here showed me a lot of love. It was like a family.”

While he wasn’t allowed to play on Friday nights last year, Ellerbe did everything he could to help out his new family. That included playing on the scout team in practice.

“That’s a testament to his determination and character. The kid was here every single day,” Bradley said. “That speaks volumes about the kid, to help his teammates out, because it is a brotherhood.”

Ellerbe found a kindred spirit in quarterback Cam Todd. Todd had to sit out the first half of the 2018 season after transferring to Senior High from Ontario.

“What we had in common is the fire we had built up from sitting out,” Todd said. “As competitors, it just kills you.”

The speedy Ellerbe — he was clocked at 4.35 seconds in the 40 yard dash at the Ohio State camp over the summer — has spent the past 10 weeks making up for lost time. He caught 22 passes for 353 yards and three touchdowns, averaged 25 yards on kickoff returns and returned an interception 40 yards for a touchdown in a season-opening 21-10 win over highly-regarded Norwalk.

“As a coaching staff we try to find ways to get the ball into his hands because he’s electric when he gets it,” Bradley said. “I was talking to a college coach about him and he said a lot of high school coaches will tell you they have a kid who runs a 4.3, but when you turn on the tape you don’t see 4.3. The difference with Cyrus is, when you turn the tape on, you see 4.3 as soon as he takes off.”

“He has a love for the game that I’ve never seen and he is a flat-out playmaker,” Todd said. “He is just a different breed of athlete.”

Second-seeded Senior High (9-1) will need Ellerbe to be at his game-breaking best against No. 7 Bay (7-3). The Rockets are in the playoffs for the sixth straight year and beat Mansfield Senior in the opening round two years ago at Bay.

“Bay is a great team,” Ellerbe said. “We’ve had a really good week of preparation, so now we’ve got to go out there and take advantage of the opportunity.”

Now if the weather will just cooperate. Temperatures are expected to be in the upper-20s at kickoff.

“I’m not one of those guys who is going to come out here with no sleeves on,” Ellerbe said. “I’ll defensively have sleeves and probably a hoody, too.”