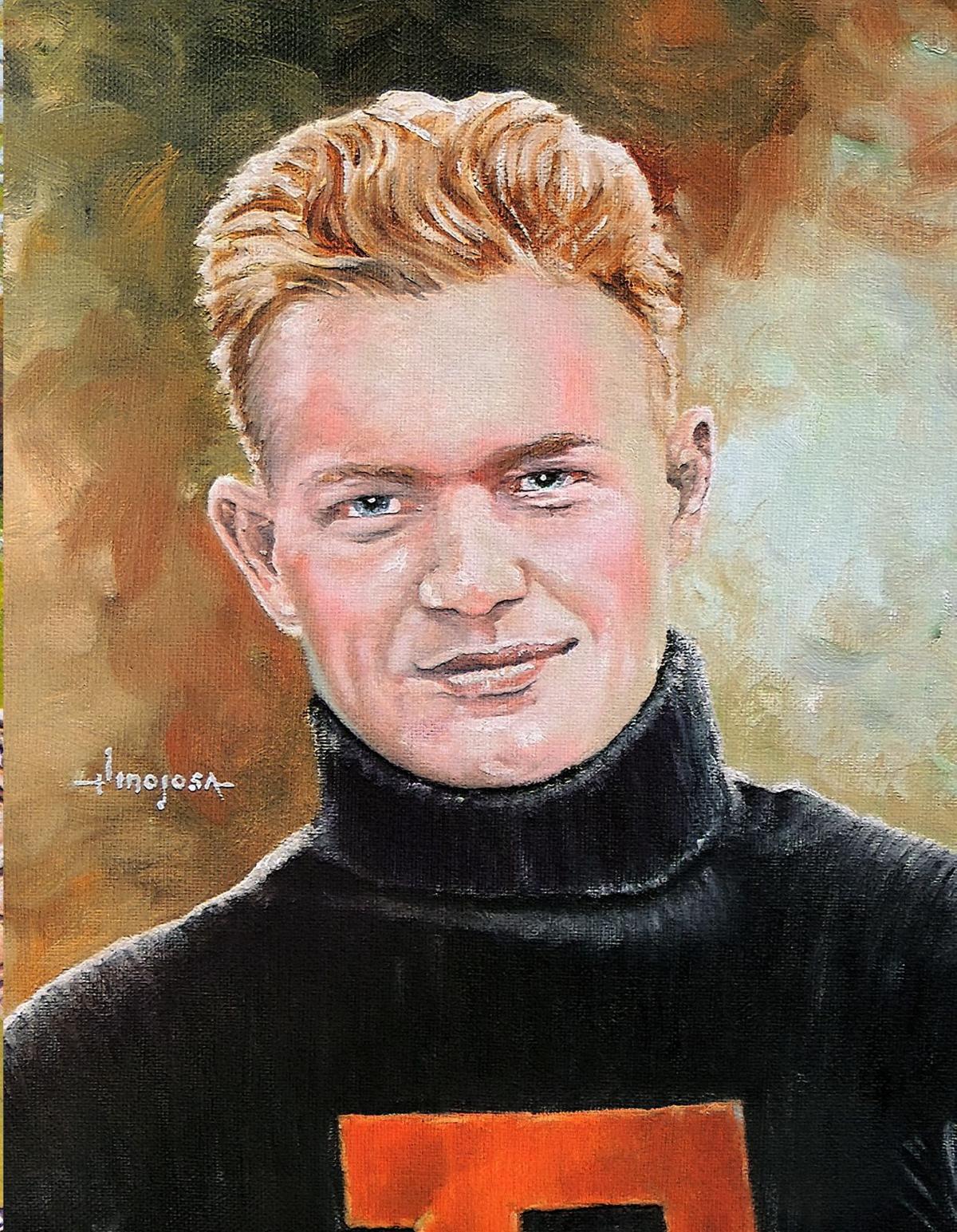 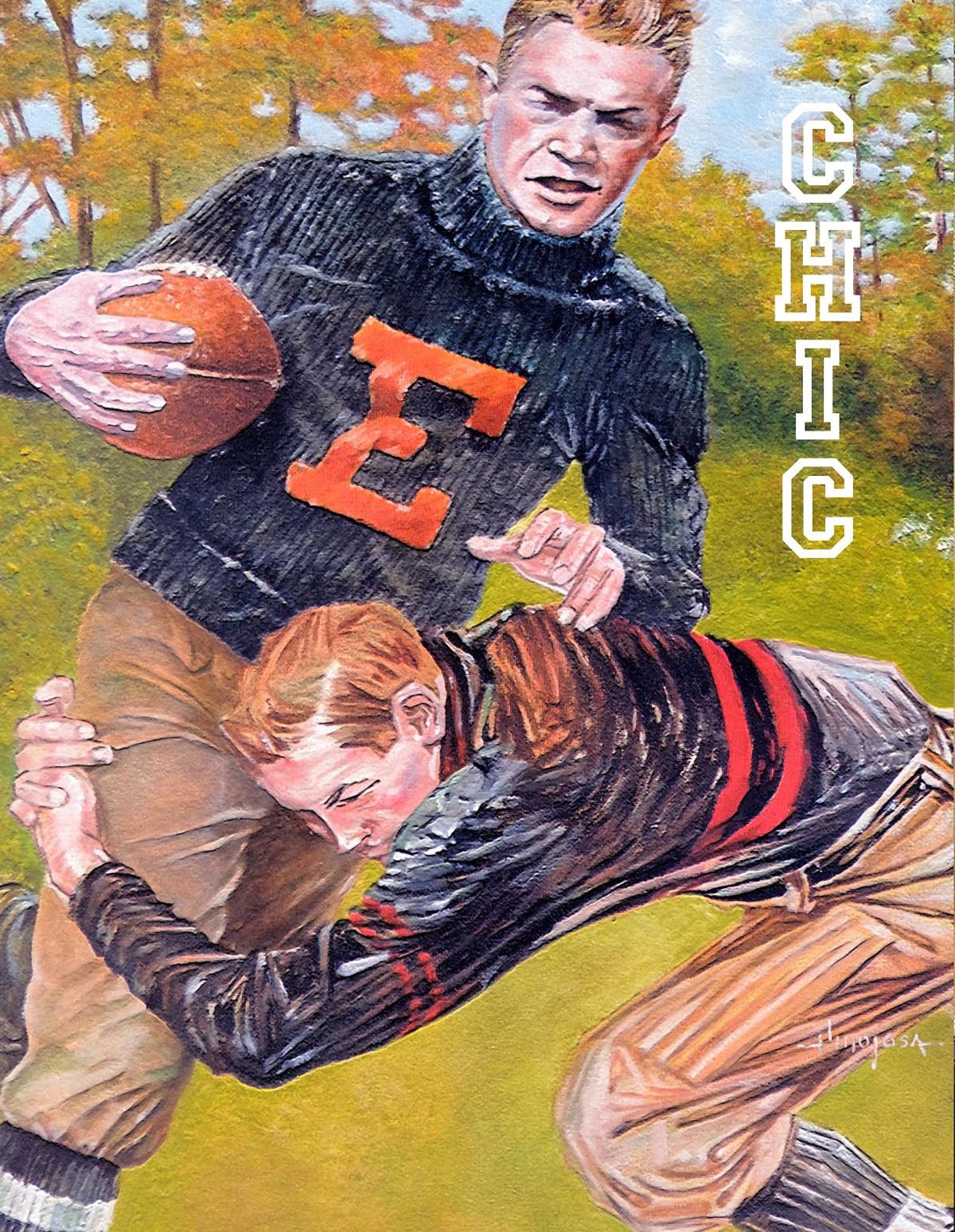 Chic Harley drew more people to his Columbus East high school football games than Ohio State could attract at the same time. A three-time All-American for the Buckeyes, he is featured prominently in Ohio's Autumn Legends, Volume I.

Chic Harley should be a name that ranks with the greatest to ever play football, and interested observers should immediately understand his place in the sport without fail.

Sadly, that's not the case, as mental illness wrecked his future and impacted his legacy.

Harley was a three-time All-American at Ohio State during the World War I era, and his exploits ignited the fervor for Buckeye football that prompted the building of Ohio Stadium -- dedicated in 1922. Yet when the Big Ten Network counted down the conference's Top 50 icons, Harley was never mentioned. Meanwhile, Illinois star Red Grange, a Harley contemporary, was ranked No. 1.

For those who saw them both, it was an inexcusable blunder.

"I saw Harley in action a number of times. There wasn't anything he couldn't do on a football field. Any time he got his hands at the ball he was a touchdown threat," wrote syndicated national columnist Joe Williams. "I never saw a college player who had a better straight arm. He could kick, pass and catch and was solid on defense.

"Harley was the first really great back I ever saw, a circumstance which is liable to color a fellow's judgment. As an example, Red Grange, remarkable as he was, could never do things -- in my book -- Harley did."

The Columbus East product was a truly unique package. His fleet feet and muscled physique were wound in an overwhelming competitive spirit, and tied together in an incredibly plain, 5-foot-9, 156-pound frame.

His Chicago family moved to Columbus when Charles W. Harley was 9 years old. He drew his nickname from his city of origin, and quickly established a citywide reputation despite his diminutive size.

Columbus East football coach Frank Gullum was just 26 in the fall of 1912, but he knew a star when he saw one, and immediately plugged in Harley to the backfield. His startling speed and agility overmatched defenders, and his ability to pass and handle the ball added more options for the East offense.

The big play was Harley's calling card, and he ripped off a flurry of them that instantly captured the city's imagination. East frequently played at Ohio Field, home of Ohio State's football team, yet the Tigers would outdraw the Buckeyes as people flocked to see Chic.

Harley was robbed as a second-team All-City choice in 1912, but no one doubted he was the best player in central Ohio as a junior and senior. Indeed, he was probably the best player in the Midwest, if not the nation by 1914. His video-game highlights would've surely made him Mr. Football as a junior after leading East to a 9-0 campaign.

He also played basketball, baseball and track, yet had a nasty penchant for absorbing head injuries -- which may have played a role in his future health issues. As a junior at Newark, Chic was knocked out and suffered a concussion in a defensive collision. Another bad break took place in the spring of 1914, when he was hit in the head with a bat after a fight broke out during a baseball game with Mount Sterling.

Harley returned to the football field that fall, and was again the focal point of a team that lost only once. That set the stage for a wild recruitment with Notre Dame, Michigan and Ohio State each vying for the wunderkind.

One story had Chic being pulled off a train on his way out of town as locals feared he would cast his lot with a rival. The Buckeyes eventually won the day when the school's Phi Gamma Delta fraternity welcomed Harley into their fold.

Chic was the star of the freshman team and then, in a pattern throughout the rest of his career, was unable to gain eligibility until two days before the 1916 season. Once he got on the field, there was no stopping him. Ohio State roared to a 7-0 record and its first Western Conference championship (the Big Ten's forerunner) in just its fourth year in the league.

Harley was the engine that powered that shocking title chase. A LIFE magazine piece 32 years later described his clutch 80-yard TD dash against Wisconsin that season.

"When Chic started on an 80-yard run in the closing seconds of a game against Wisconsin, Joe Mulbarter, a young professional player of immense displacement who had been a teammate of his at East High, was so roused that he burst out crying and fell from the box he was occupying."

Walter Camp made Harley an All-American and more than 80 years later Sports Illustrated theorized Harley would've won the Heisman as a sophomore had the award existed at that time.

"His speed and change of pace were unsurpassed," Buckeye coach John Wilce said years later. "In the (1916) Northwestern run, he even used the running field judge as interference part of the way."

"Harley's work this season is second to no man in American football," Rice wrote in his column, The Sportlight. "It is only about once every decade that an entry accomplishes such phenomenal achievements in game after game."

In April 1917, the U.S. entered World War I, and Harley pondered entering the service. He didn't decide to return to Ohio State until right before the season began, and even then he was late. His quirky behavior began to emerge though, and he missed the first two weeks of fall camp while in Michigan on a hunting and fishing vacation.

Harley sat out much of the season opener, but was back as a starter and scored four TDs in a 53-0 pounding of Ohio Wesleyan. He was benched again just as conference play began against Indiana (for strategic reasons, according to Wilce). Yet Harley scored four TDs when he entered, and Ohio State rolled from there to a second straight conference championship.

Chic withdrew from school shortly after the 8-0-1 campaign ended in 1917 and entered the Aviation Corps. He landed in San Antonio, where his bizarre antics sidetracked him again. He violated the dress code, overslept, was at odds with his superiors and was caught flying without permission. He was discharged, then reinstated, but never left the country and was not deployed in the war effort.

He was ashamed of his checkered military stint, and eager to make up for the lost year at Ohio State. Harley was selected a team captain in 1919 and returned to form immediately.

In the biggest moment of his career, Harley ripped off a 42-yard TD run at Ann Arbor to spearhead a 13-3 victory over Michigan, the Buckeyes' first-ever win over the Wolverines.

"Harley's change-of-pace, straight-arming and shifting of the hips as he shook off three tackles in making his run for a touchdown was as pretty a piece of work as I ever saw any player do," Michigan coach Fielding Yost said. "Harley threw off my best tacklers when making that run."

Defensively he added at least two, and perhaps as many as four interceptions (game accounts vary) in a sparkling all-around performance.

"Mr. Harley, I believe you are one of the finest little machines I have ever seen," Yost told him after the game.

Ohio State remained unbeaten until the season finale, although Harley was again benched for undisclosed reasons at the outset of the Purdue game, before emerging to account for a pair of touchdowns.

In his last game against Illinois, rumors of a knee injury to Chic filled the air. He played, and scored a TD, but the Illini won 9-7 on a field goal with eight seconds to play. It was the only loss of Harley's Ohio State career. He stayed on the field and wept openly for more than an hour after the game.

He did not seem himself in any of his final three contests, and hindsight suggests his mental state had begun to deteriorate.

Still, he finished his collegiate career with 23 touchdowns in 23 games and Ohio State was 21-1-1 with a pair of league titles. Sports Illustrated theorized he again would've won the Heisman as a senior, with the epic Michigan run as his Heisman moment in 1919.

"It's not too much to say that if one player ever pulled a football aggregation on its feet and put his college into a place in the sun, that player was Chic Harley," John Heisman told King Features Syndicate.

Harley earned his degree and helped coach the 1920 football team. In 1921, he agreed to take part ownership and play for the Chicago Staleys (who would become the Chicago Bears), but injury and mental illness cut short his pro career after just one NFL season -- albeit a championship year. He never played again.

Still, Harley's influence in Columbus remained. He spearheaded the drive to build Ohio Stadium, completed in 1922 and immediately dubbed the House that Harley built. He was also an easy choice as a charter member of the College Football Hall of Fame.

Yet Harley struggled to find his way after college. Eventually, he was diagnosed with dementia praecox (a term later used interchangeably with schizophrenia). In 1938 he retired to a veteran's facility in Danville, Illinois, and stayed there until his death on April 21, 1974.

No Ohio athlete so great ever had his deeds tucked away so quickly or so quietly.

"He was the greatest football player we Ohioans have ever seen and, we like to add belligerently, we have seen them all," author James Thurber wrote in 1940. "If you never saw Chic Harley run with a football, we Ohioans could not describe it to you. It wasn't like (Red) Grange or (Tom) Harmon or anybody else.

"He was kind of a cross between music and cannon fire, and it brought your heart up under your ears."