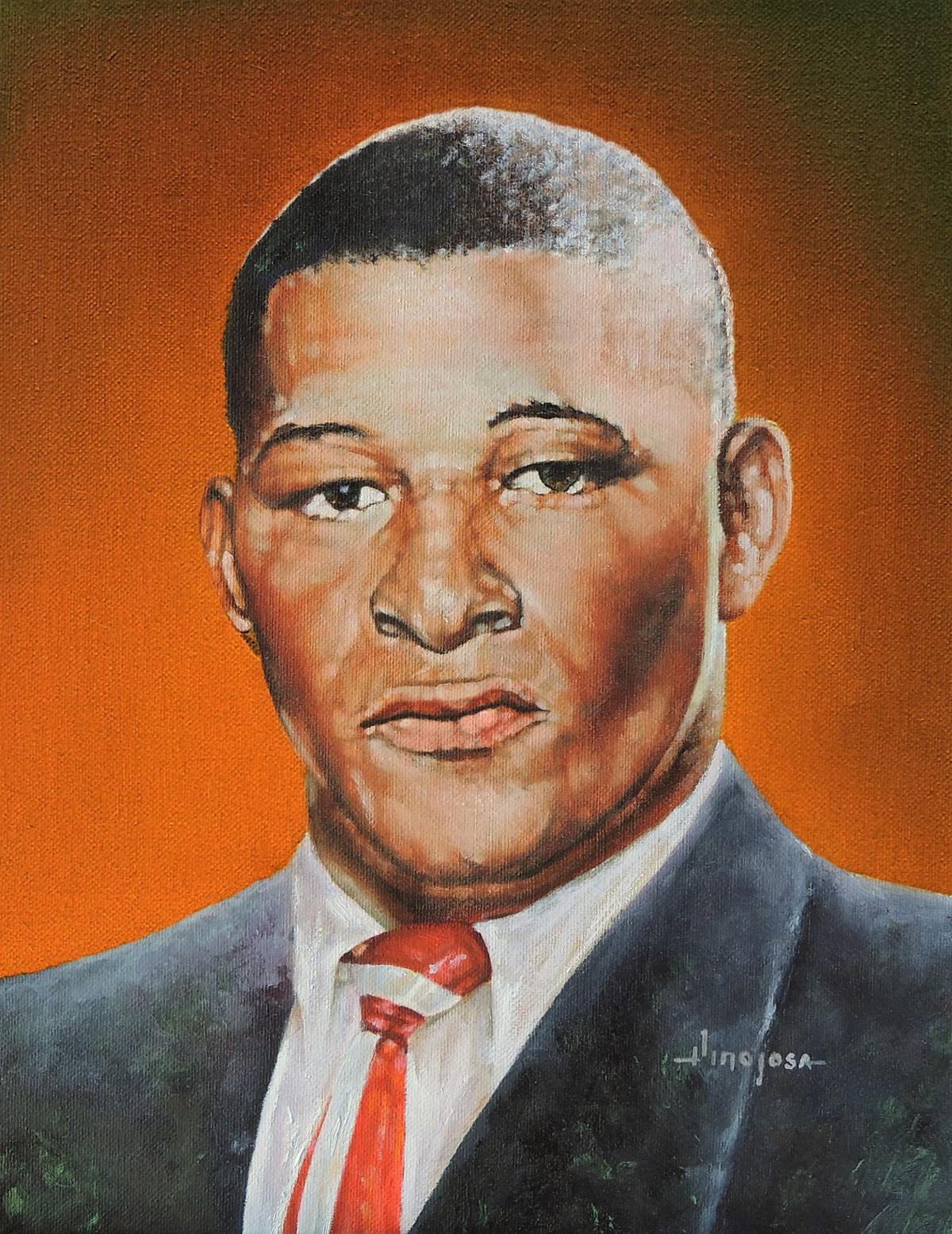 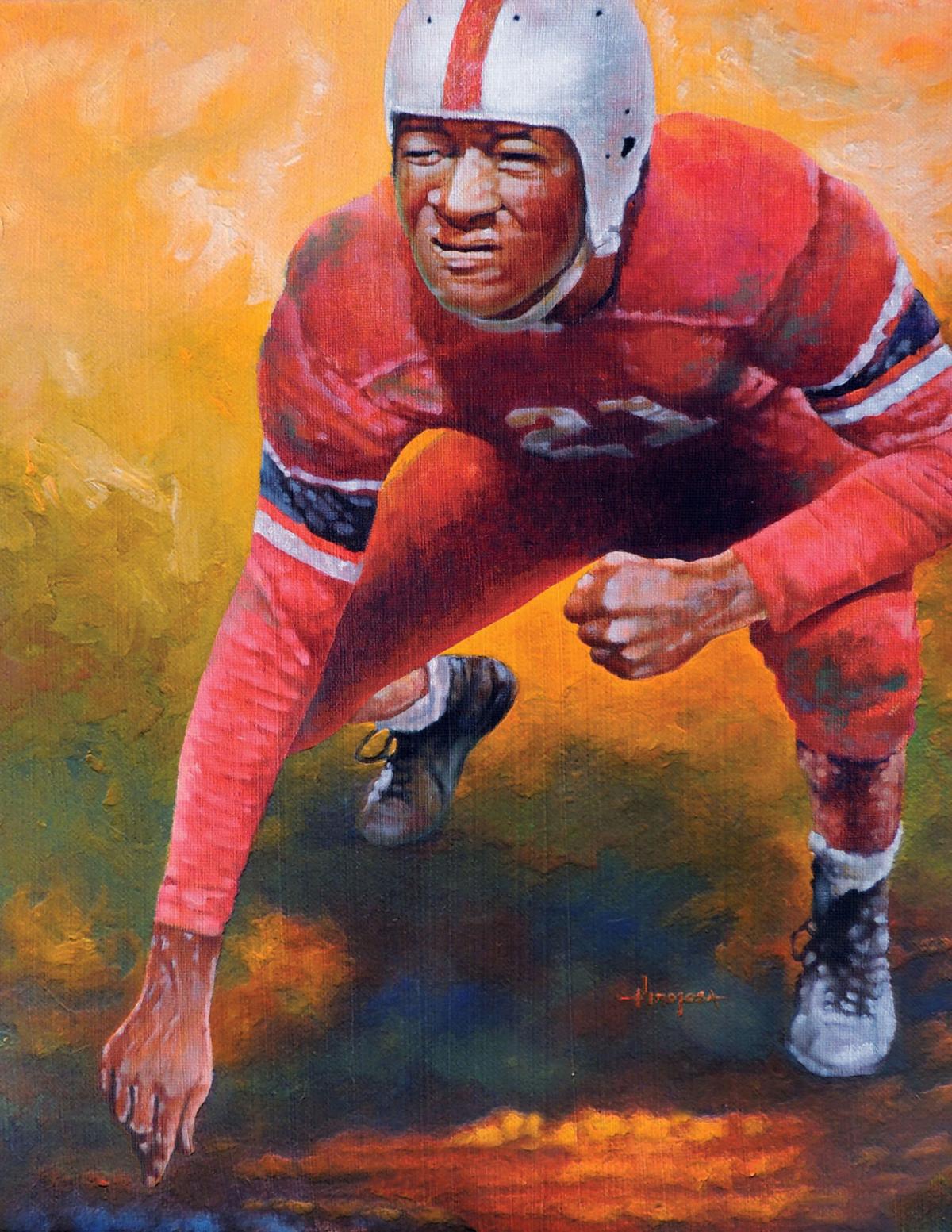 EDITOR'S NOTE: Today is Part 4 in a 12-part series on Ohio's historic football personalities. The series began on Aug. 5. It continued on Aug. 6 and Aug. 7.

Calvin Jones was exactly what Woody Hayes needed. The second-year Ohio State coach was coming off an abysmal 4-3-2 record in his rookie campaign in Columbus. He badly mismanaged returning Heisman Trophy winner Vic Janowicz in 1951 and Hayes' coaching acumen was in serious question.

As he cast his eyes to the eastern edge of the state, Hayes saw the unquestioned top player in Ohio wreaking havoc on both sides of the ball at Steubenville, a powerhouse big-school program. That player was Calvin Jones, a walking legend while he was still in high school.

At 6-foot, 220 pounds, Jones was a rare four-year letterwinner in football and a varsity standout in basketball, spearheading highly successful squads in both sports. An end his first three years on the football field, Jones became a guard as a senior to dominate the middle of the fray.

Steubenville claimed the 1951 UPI state football championship, and Jones left a slew of victims in his wake -- one of them in a preseason scrimmage was Alliance quarterback Len Dawson. The future Super Bowl MVP and Pro Football Hall of Famer never forgot his first encounter with the man they dubbed Big Red.

"Jones had been ripping up quarterbacks and running backs all through his high school career," Dawson said. "Talk about fear! Cal Jones is the reason I developed a quick release. Nobody could block him so you had to try and do something to stay in one piece."

Hayes was long a devotee of physical line play, and that made Ohio's lineman of the year the priority recruit in the class of 1952.

The Buckeye boss worked overtime on Jones, and got a verbal commitment from him. But just before the fall term began, Jones' neighborhood friends, Frank Gilliam and Eddie Vincent, stopped by his house to say goodbye. They were headed to Iowa City on football scholarships. This would be the first time the trio hadn't played together since fifth grade -- and it was too much for Jones to bear.

So, he ran upstairs to his room, packed his suitcase, and legend has him jumping out a window with his mother in hot pursuit.

"You can't do that, you gave your word to Coach Hayes!" she exclaimed.

Jones never looked back -- and he had never been to the Iowa campus, either. The Hawkeyes were the sad-sack program of the Big Ten, finishing with a losing record in nine of the previous 10 seasons. Naturally, coach Forest Evashevsky was elated to have Jones. But the defection triggered an immediate investigation by Big Ten commissioner Tug Wilson.

"I'll tell you why I came out here," Jones told Wilson. "They treated me like a white man. I like it here. I'm going to stay."

And so he did.

The Steubenville standout paid immediate dividends, too. Jones was an instant starter and star in his first year of eligibility as a sophomore. The Hawkeyes finished 5-3-1, 3-3 in the Big Ten, their best mark in 14 years, and Big Red made one All-American team.

"Jones is one of the best first-year players I have ever seen," Minnesota coach Wes Fesler said after watching the Steubenville stud blow up the Gophers' offense in a 27-0 upset.

In 1954, Jones broke his wrist just before the season began. But he played through the injury to become a consensus first-team All-American and the Hawkeyes again enjoyed a winning season, 5-4, 4-3 in the conference. On Sept. 27, 1954, Calvin Jones became the first black man to grace the cover of Sports Illustrated in a fearsome pose.

"He was the greatest college football player I ever saw," said his younger teammate Alex Karras. "Calvin had phenomenal reactions. I'd never seen a man hustle like he hustled."

Jones suffered through an injury-plagued senior season, too, but was still the nation's dominant lineman. Again he earned consensus All-American recognition, and became the first black man to win a major national award in college football by garnering the 1955 Outland Trophy. He was also 10th in the Heisman balloting.

Interestingly, Hayes finally got to coach him in the 1955 East-West Shrine Game.

"He was a man of enormous enthusiasm, a great football player and a great leader," Hayes said of Jones.

In a scenario that seems odd today, the Canadian Football League outbid the NFL for Jones' services. He opted for the superior financial opportunity with the Winnipeg Blue Bombers. A star in his rookie season of 1956, Jones made the CFL all-star game.

Tragically, on the flight home from that event, his plane crashed in the Canadian Rockies. There were no survivors. His 1980 induction into the College Football Hall of Fame offers a fitting epitaph.

"Jones lived only a short time, but he left one of the longest shadows on Iowa football for years to come. As the individual that all Hawkeye linemen are compared to, Jones will live forever as one of Iowa's greatest players of all time."