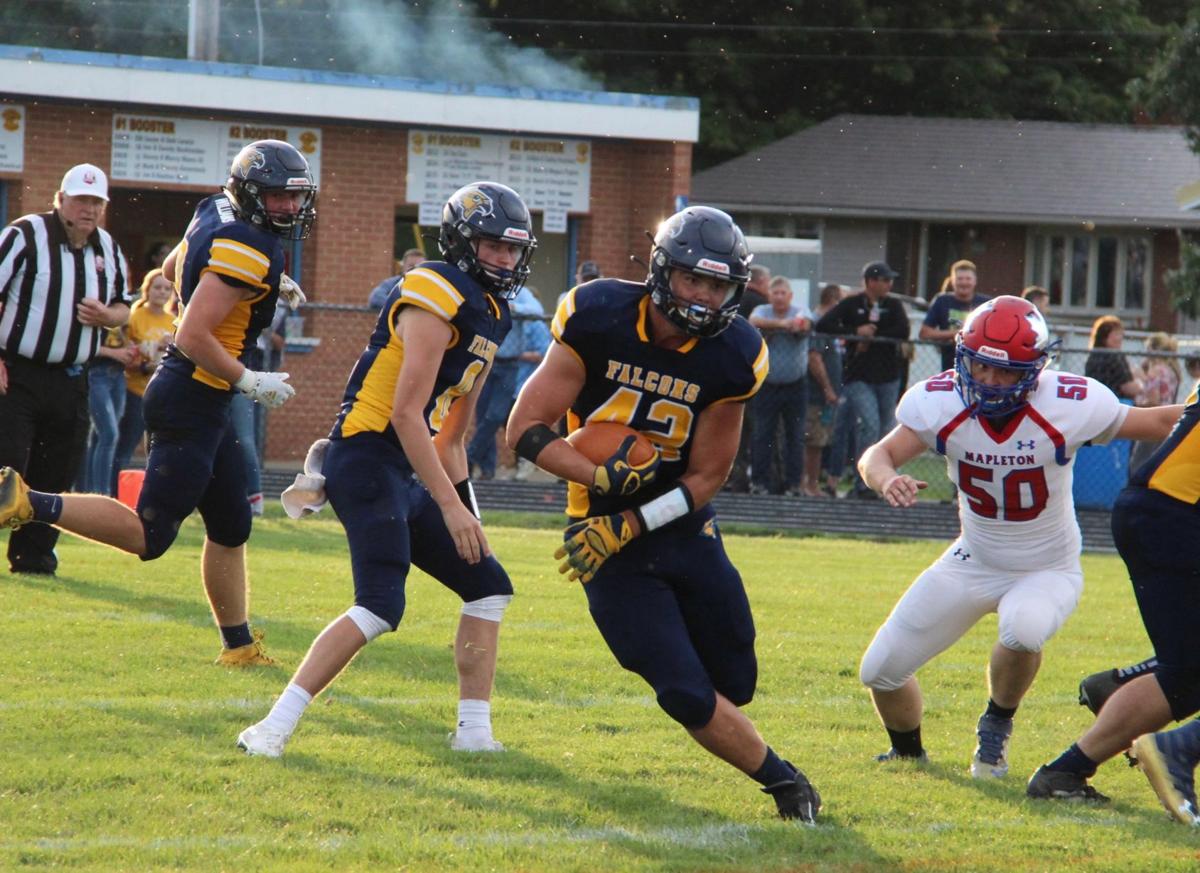 Hillsdale running back Briar Funk slices through the Mapleton defense for a touchdown in a 31-7 win over Mapleton in the season opener.

JEROMESVILLE — Nothing has come easy for Hillsdale this fall on the football field. Second-year coach Trevor Cline wouldn’t have it any other way.

The fifth-seeded Falcons (8-3) take on No. 8 Carey (6-5) on Friday at 7 p.m. in the Division VI, Region 22 semifinals at Willard High School, thanks to a remarkable fourth-quarter comeback in last week’s 25-21 win at Northmor in the opening round.

Including last week’s stunner, six of Hillsdale’s 11 games have been decided by seven points or less. The Falcons are 4-2 in those games.

Last week at Northmor, Hillsdale trailed 21-10 in the fourth quarter only to score twice in the final 10:08. Sturdy defense and timely offense, hallmarks all season, sent the Falcons to the second round of the playoffs for a third consecutive year.

“This group has been really resilient throughout the year,” said Cline, a Hillsdale graduate who quarterbacked the Falcons to the regional championship game in 2010. “It’s been one of those years that we have had a lot of close games.

“I think having had that through the regular season helped us be ready for this moment.”

Not a lot of prognosticators expected the Falcons to be playing in Week 12, considering all they have been through. Hillsdale lost a wealth of talent to graduation then saw starting quarterback Caden Mutchler go down with a season-ending injury in Week 7.

Junior Ty Williams, Hillsdale’s leading tackler with 128 stops from his linebacker spot, took over for Mutchler at quarterback and orchestrated a pair of fourth-quarter touchdown drives last week.

“On our team, everybody believes in the person standing next to him,” Williams said.

Hillsdale reached the regional championship game in 2017 and advanced to the second round last fall, but the core of those teams graduated last spring. That group included leading rusher Garrett Smith, leading receiver Tyler McFadden, do-it-all quarterback Alex Becker and two-way lineman Michael Garn, a first-team All-Ohioan who is a red-shirt freshman at Marshall University.

Despite all those losses, the Falcons opened the season with five straight wins and were 6-1 before Mutchler broke his collarbone in Week 7.

“Last year’s group was a special group, not only athletically but off the field, too,” Cline said earlier this season. “The leadership they brought was special. There is a reason why, when they were here, we had a lot of success.”

After Mutchler’s injury, Hillsdale lost a pair of heart-breakers to playoff qualifier Dalton in Week 8 (34-31) and Smithville in Week 9 (21-20). The Falcons secured the eighth playoff berth in program history (all since 2009) with a 15-8 win over Waynedale in Week 10.

“We knew our kids had a lot of heart,” Cline said last week. “We dealt with a lot of injuries. Guys have had to step in to learn new roles and have done a phenomenal job.”

Williams, the son of former head coach Tom Williams and younger brother of career passing leader Trey Williams, has completed 16 of 31 passes for 241 yards during his abbreviated time at quarterback. He’s also the team’s leading rusher with 529 yards and 10 touchdowns on 115 carries.

Senior and four-year starter Briar Funk has rushed for 483 yards and four touchdowns, including what proved to be the game-winner against Northmor, on 102 carries.  As a linebacker, Funk is the program’s career tackles leader with 417 stops.

Senior Colt Bishop has emerged as Hillsdale’s deep threat with 20 catches for 501 yards and six touchdowns. Sophomore Justin Zeigler has 18 catches for 294 yards and three scores and is a perfect 7-for-7 on field goal attempts.

Hillsdale’s opponent on Friday is coming off an upset of its own. Carey stunned top-seeded Western Reserve 50-41, scoring twice in the final minute.

Dual-threat quarterback Ethan Beringer completed 106 of 196 passes during the regular season for 1,333 yards and seven touchdowns and was the team’s leading rusher with 589 yards on 22 carries. Beringer threw a pair of touchdown passes in the win over Western Reserve, while Reece Billock rushed for three scores.

The Blue Devils, who lost to Hillsdale in the second round of the playoffs in 2017, finished third in the Northern 10 Athletic Conference behind co-champs Seneca East and Wynford. Carey was 1-4 at the season’s midway point, but three of those losses were to playoff teams.

Like Carey, Hillsdale is playing with house money in the second round of the postseason.

“Once you get in the playoffs, it’s fair game. Everyone has a shot to keep advancing,” Cline said. “We have nothing to lose. We just go out there and play to the best of our abilities and hopefully keep advancing.”